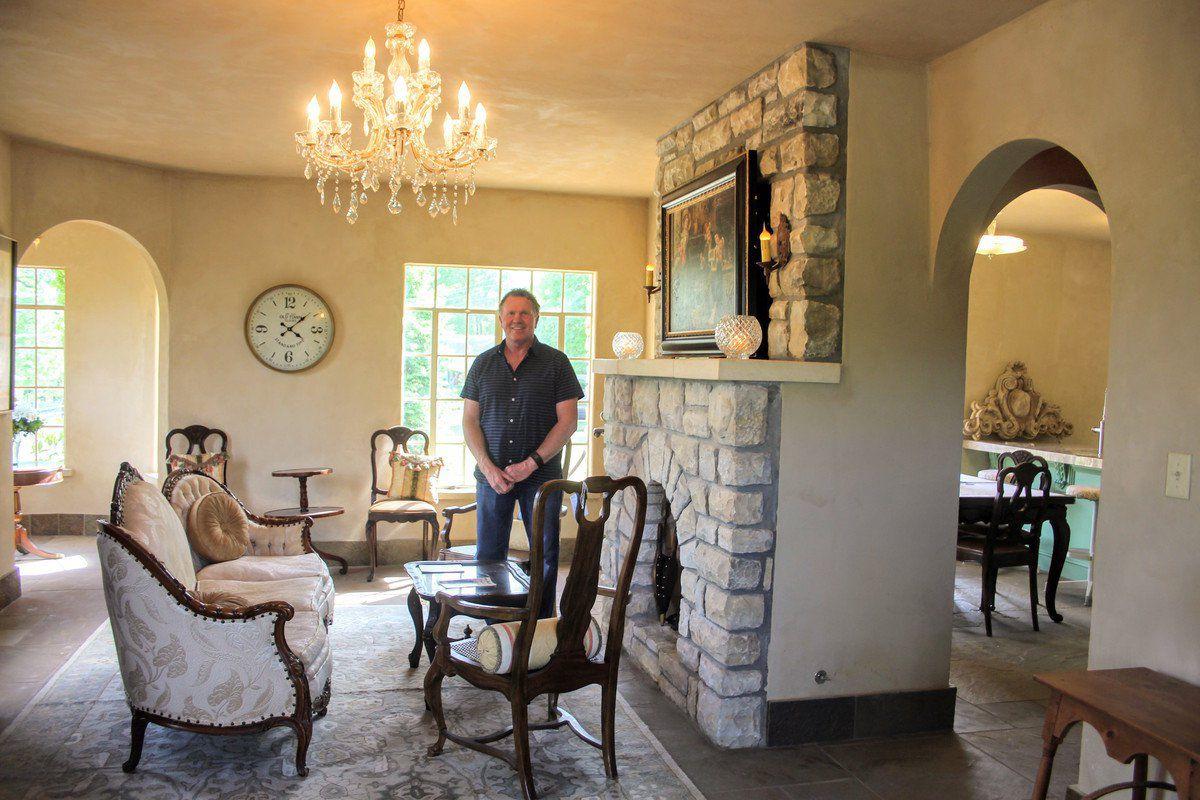 Known as Franklin Castle, the 1931 structure on College Avenue has been renovated, and some say saved, by Mike Shelton. The building and grounds are to be a rental celebration event venue. 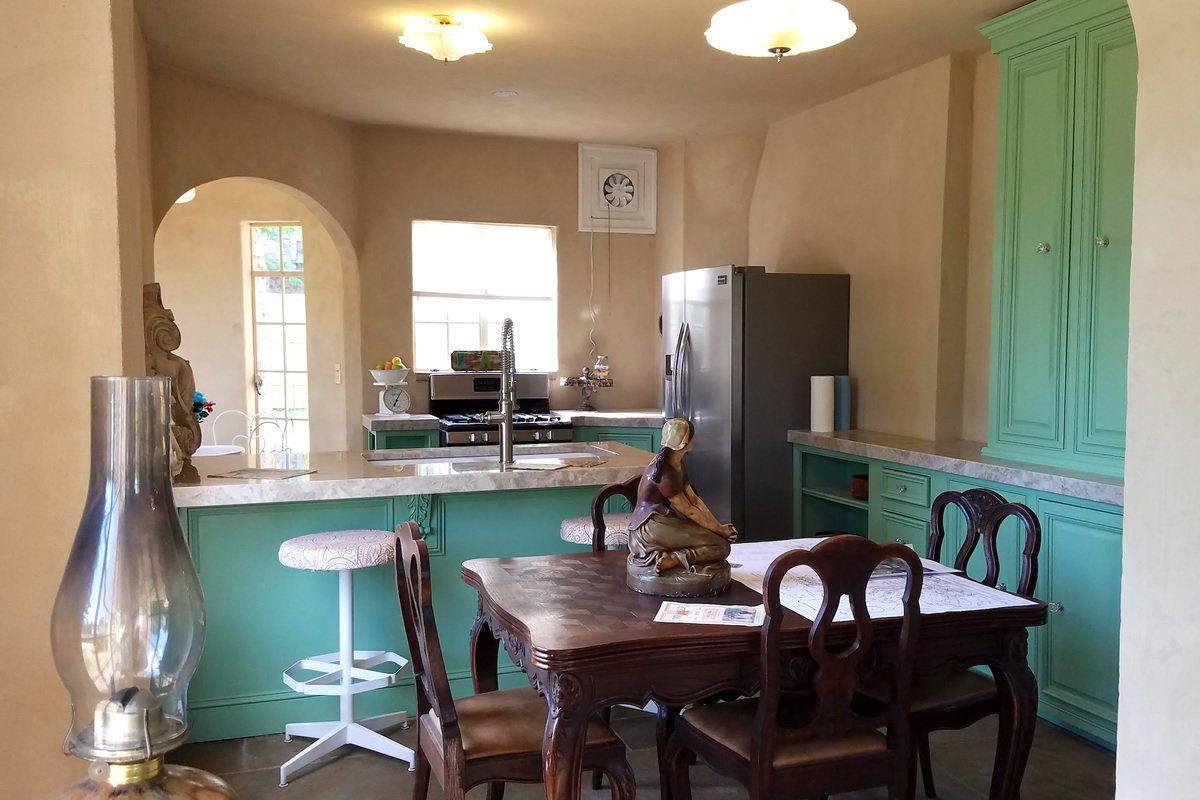 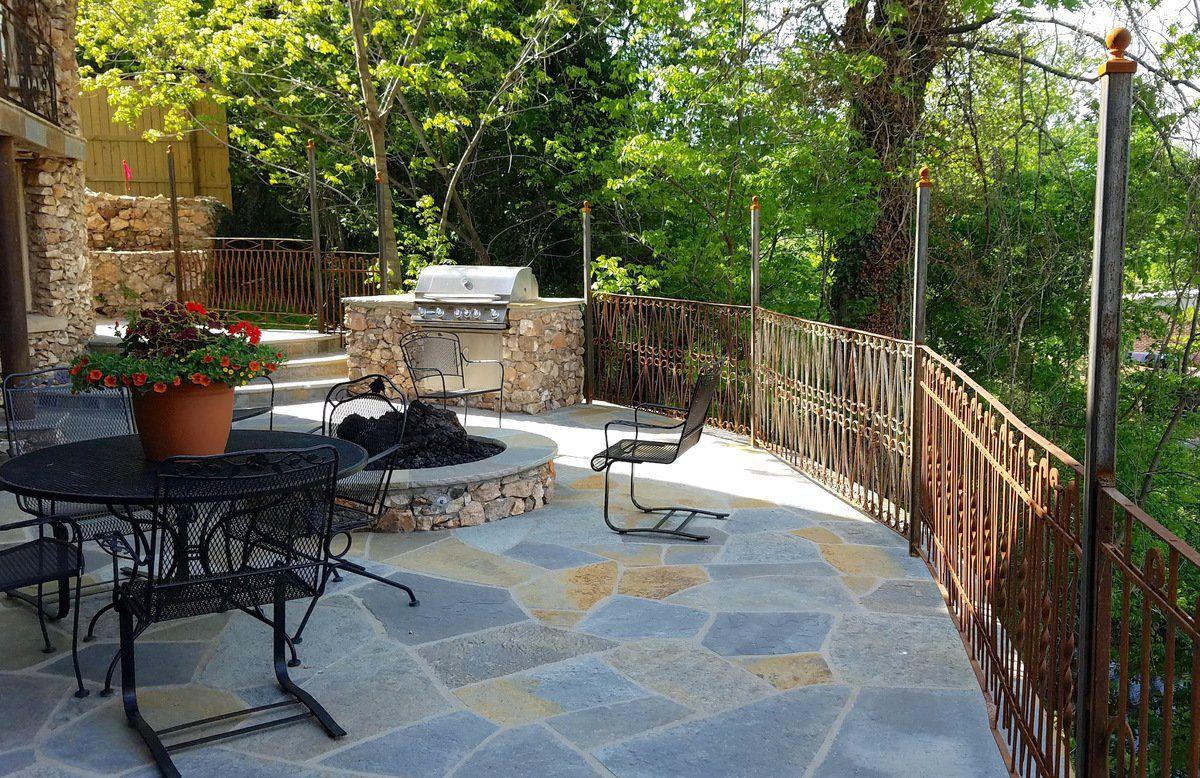 Mike Shelton, current owner of Franklin Castle, built this patio to replace a retaining wall. He has also been clearing off the bluff, and has purchased the adjacent property in the background to refurbish into a chapel.

Franklin Castle in Tahlequah, Oklahoma, was build in 1931 by Marion E. Franklin. It was purchased in 2015 by Mike Shelton who has refurbished the house and has opened it for rental as a celebration event venue.

Mike Shelton has been working on a labor of love for 18 months, and he's almost ready to share it with the Tahlequah community.

Shelton purchased Franklin Castle on College Avenue in October 2015. With over 30 years of restoring historic properties under his belt, the owner of Shelton Masonry fell in love with the 1931 building at first sight. The house built by Marion E. Franklin was covered in vines and many parts of the interior needed to be replaced or refurbished.

"I bought it to save it. I loved the stone work on it. What started it all is I wanted to bring it back. Then, I found out how much people in this town love this place," he said.

Shelton has been visiting Tahlequah for decades, as he and his high-school-sweetheart wife, Tara, like spending time on the Illinois River. They live in Tulsa, but they also have a house at Lake Tenkiller.

Shelton admired Franklin Castle for a decade before the opportunity to purchase it and save it arrived. His original plan was to refurbish it and resell it, but then he got involved in the project and met many people in the community.

"I love Tahlequah. This is a great community. If it weren't for the love of the people here, I would have restored it and been gone," said Shelton. "I never dreamed it would come this far."

Upon entering through the original wooden door, visitors step into the living room with a wooden staircase in front of them.

"The ceiling was caved in and you could see daylight through two floors. The wood floors on this level were rotted out due to the leaks in the ceiling. We reclaimed a little and used it on the second floor to finish those," said Shelton. "We replaced the wood windowsills and baseboards with stone to make it more bulletproof so it would hold up to the elements."

The stone was imported from India.

The original metal fireplace had rotted. It was torn out and the stone used to rebuild it. The mantel came from Sportsman Park, which was the original name of the old Busch Stadium in St. Louis. Above the fireplace is a painting, and behind that is a flat-screen TV. A stereo system plays music in the living room and outside on the patio.

An arched doorway is new to the living room, but is modeled after other archways in the house. Shelton opened that section of wall to gain more access to the dining room, which had another wall removed to open it to the kitchen.

"I love the open feel in here," said Shelton. "I tried to save as much as possible. The house started showing lots of charm."

While the original milk delivery portal and vent are still visible, the kitchen appliances are modern and central heat and air have been added throughout the house. The first floor also has an office, a half-bath and a bedroom.

In the office, visitors can see the house's original safe, as well as a door that had been boarded over on both sides. Other original features include the working doorbell and a broom closet.

"The light fixtures are about 50/50 original and the others are from that period. I spent a lot of nights on eBay and Craig's List," said Shelton. "A hundred panes of glass were replaced throughout the house."

For decorating and furniture suggestions, Shelton did a lot of research online and in old magazines. Tara owns the Briar Patch Market on US highway 62, so she has been a source for furniture and decorations.

"We tried to be time-correct; it's like walking into a time capsule," said Shelton.

The upstairs has three bedrooms and two full baths, and electricity has been added to all the closets. One of the bathrooms used to be the utility room, but Shelton blocked off the hallway door and turned the room into an adjoining master bath for one of the bedrooms. While it still has the original built-in ironing board, the open, modern shower has two showerheads.

The second bathroom had to be completely redone, and now has a clawfoot tub. Shelton said the bathtub in there when he bought the house wasn't clawfoot, but that's a style of the 1930s.

The basement features a bathroom with a shower, a wine room, a bedroom, and a couple of utility rooms.

"It's cavey down here. It was really gloomy," said Shelton. "We restored the furnace, but it's not functioning. We added ductwork to it though to make it look like it is part of the system."

The wine room was once the coal storage area. A chute where coal was shoveled into the house at delivery now has a stained glass window in it. Shelton said the basement stays amazingly cool in the summer.

Passersby may have noticed changes to the outside of the Castle, as Shelton has torn off all the vines, cleared foliage from the bluff, and added a waterfall and patio. The recirculating waterfall looks like it comes from under the patio.

The patio area used to be a retaining wall. Now tiled, it features seating, a fire pit, and a grill area. A second-floor balcony overlooks the patio and Town Branch Creek, and has been updated with support columns, stone over the concrete, and a higher railing to bring it up to code.

"You could not see the creek because of the jungle that had grown up. It was so trashy and the view is so pretty," said Shelton.

He has "adopted" the creek from the low-water slab off College Avenue to the low-water slab at Smith Street, with plans to keep it free of trash and the foliage in control. One reason for extending his reach up the creekbed is that he has also purchased the property adjacent to the Castle.

The stone building behind Franklin Castle most recently had three apartments in it. Shelton removed the windows and has begun gutting the building. His master plan is to turn it into a chapel with several stained glass windows. The lot next to it will transform into a park-like setting, and the building in front of it will be turned into a restroom and storage area. He will also cut down the "jungle" on the bluff and hopes to rediscover the stairway that comes up from the creek.

"I've had elderly people who remember the stairs from when they were younger. I'm excited about this part. The bluff is so pretty and I want to open it up so people can see it," he said.

The landscaping around the property will be complete in about two weeks, and Shelton plans to keep color growing year-round.

"I've fallen more and more in love with it [the Castle] and I want to share it with everybody," he said.

The sharing has already begun. Even though Shelton plans to add more furniture and decorations, Franklin Castle has already hosted a wedding shower.

Harris, who is a former Tour Tahlequah director, said they have been advertising since late March and have five events booked already, including a 60th birthday party, anniversary parties, and weddings.

Shelton envisions bridal parties getting ready in the second-floor rooms, while the groom's group hangs out in the basement, and guests are mingling on the main floor and outside.

The official opening will be May 1, and Shelton plans to host an invitation-only event for community organizations the early part of May.

The “castle,” built by Marion E. Franklin in 1931 for his family, may not be the oldest of Tahlequah’s historic homes, but it is the city’s most recognizable residence.