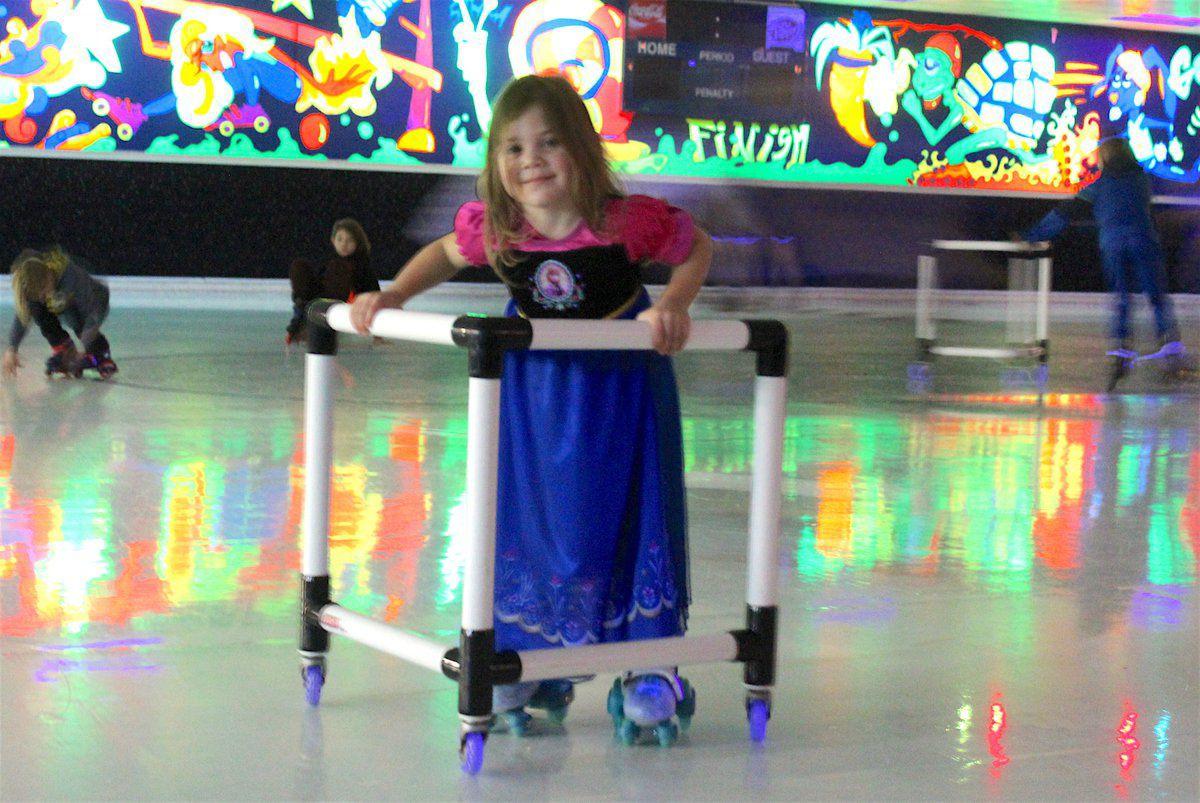 Finnley Medak, 3, skates along Thursday at the Skatehouse with the help of a roller walker. 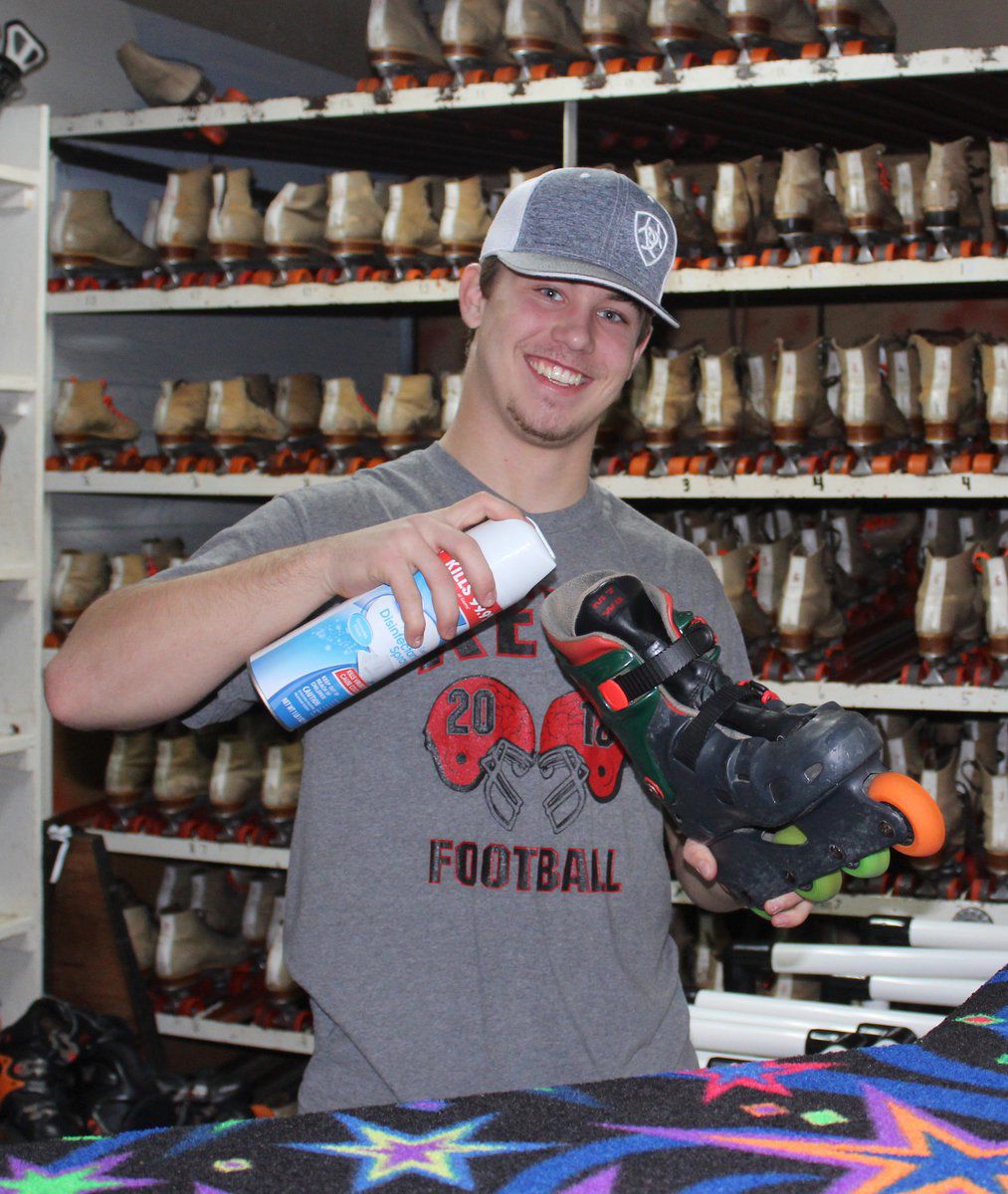 Drew Morgans grew up skating and playing roller hockey. He's been employed at the SkateHouse for a few months, and said roller blades are popular with kids. 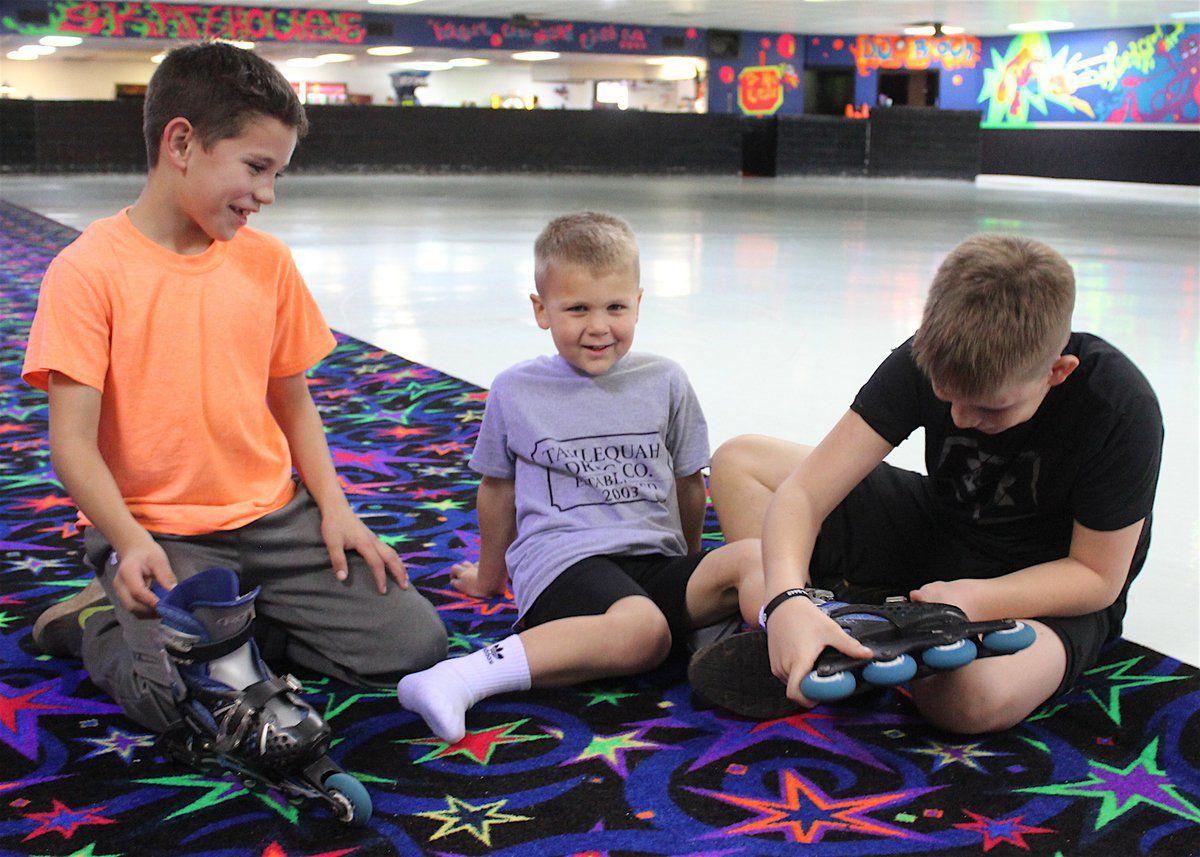 First-time skater 5-year-old Keaton Lee, center, gets assistance with his in-line skates Thursday at the SkateHouse from brothers Tanner, left, and Trae Kupsick.

Finnley Medak, 3, skates along Thursday at the Skatehouse with the help of a roller walker.

Drew Morgans grew up skating and playing roller hockey. He's been employed at the SkateHouse for a few months, and said roller blades are popular with kids.

First-time skater 5-year-old Keaton Lee, center, gets assistance with his in-line skates Thursday at the SkateHouse from brothers Tanner, left, and Trae Kupsick.

Trends come and go, but roller skating rinks have been around since the 1860s, and the one in Tahlequah is still a hot spot for kids of all ages - and adults with enough ability and nerve.

Nicole and Travis Medak took their three kids - ages 3, 5, and 9 - to the SkateHouse Thursday for their first public skate.

"We've been here for birthday parties. We thought we'd give them a day out of the house, something to do," said Nicole. "It's family friendly. We like it."

The couple had been reminiscing about the places they roller-skated when they were younger. Travis said he skated from kindergarten through high school when he lived in Tacoma, Washington. He would walk to the rink after school and skate until his mom picked him up after work.

Nichole liked that her son always sees people he knows while there.

Their daughter was using what is basically a walker with wheels, which allows young children or inexperienced skaters some support.

Five-year-old Keaton Lee started his first skate experience with the "walker," but he gained confidence and skill to try the in-line skates without it.

"He did a lot better without it," said his mom, Kim.

Addison Berry has worked at the SkateHouse for three years, and she said most kids are choosing to use the roller blades, or in-line skates. These have the wheels in a line from toe to heel, instead of two pairs that the quad skates have.

"Dusty [Fore] has been playing videos of people doing tricks on the regular skates to see if people want to try that," said Berry.

"On Friday nights, we'll run out of roller blades," he said.

Morgans and his co-worker, Torey Snell, grew up skating and playing roller hockey at the SkateHouse. They both had the same advice for beginners.

"Fall and get back up," said Snell. "And buy your own helmet."

Helmets are not required for regular roller skating, but are for roller hockey, which should start up this month.

Boys and girls, ages 5-15, can be a part of roller hockey on Monday nights. Details will be posted on the SkateHouse Facebook page, or are available by calling 918-456-1100.

Kendyl Kemp, 11, has been skating since she was 1, and playing roller hockey for two years.

"You get tripped a lot and rammed into the wall," said Kendyl. "I love skating because it is my thing."

Those who like competition, but may not be interested in the structured sport, should just attend a regular skate session. Many games are scheduled throughout the sessions, including speed races, limbo, dodgeball, and "dead bug," in which kids fall to the floor are wiggle like bugs in order to get candy.

"Snowball is our couples skating game," said Berry. "The boys sit on one wall and the girls on the other, and they pick who they want to skate with."

She said Friday nights are busy with the older elementary and middle school kids, while Saturdays are mainly families and birthday parties.

The music playing can make the skating experience into a memory.

At the SkateHouse, the DJ picks music from a family-friendly playlist employees have made.

"We add new or popular songs that come out," said Berry. "We get requests for certain songs, and we check them to make sure they're appropriate."