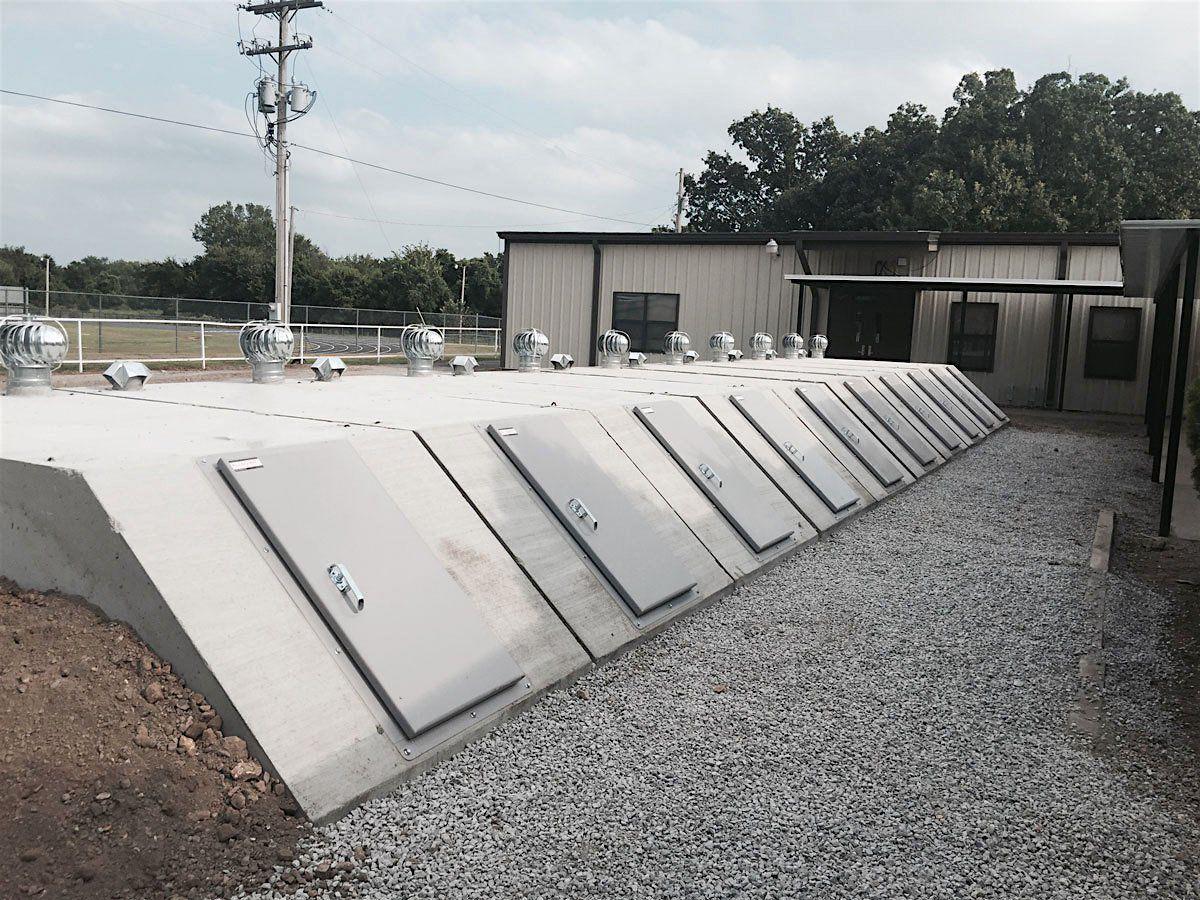 In 2015, Peggs School bought 20 storm cellars for the school grounds. Students and adults had to go in them two times last Friday. 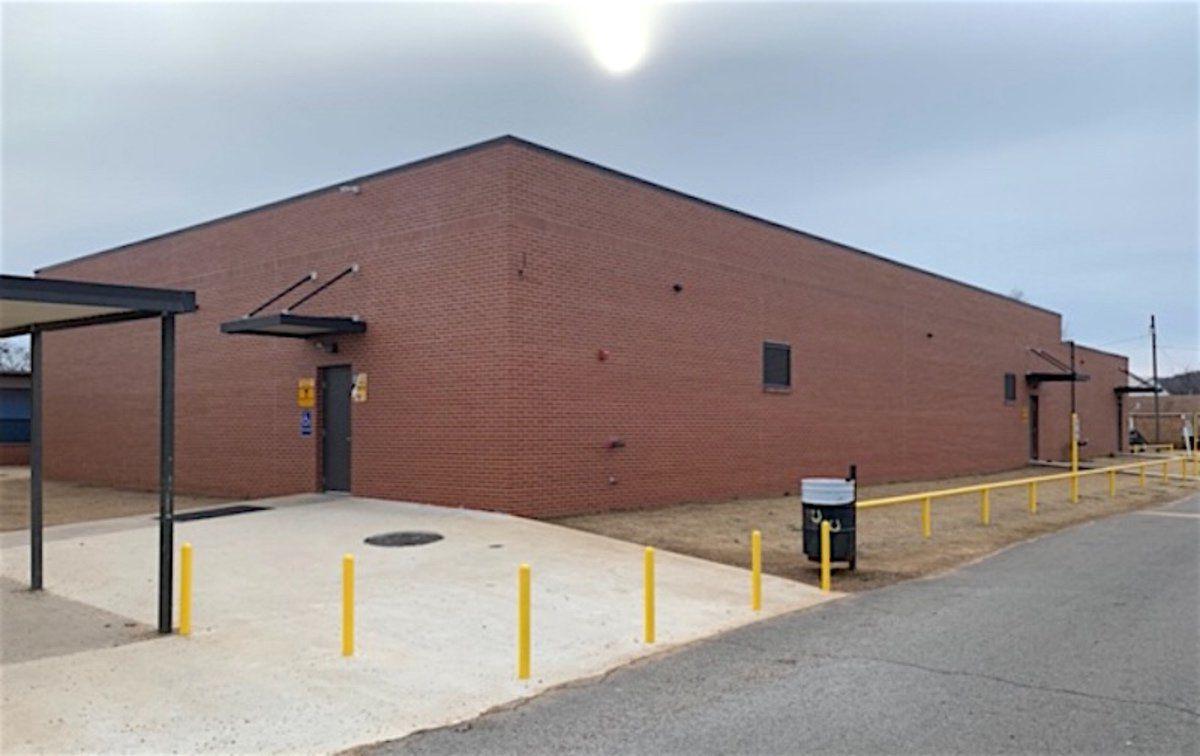 Part of a 2015 bond helped build the Hulbert Public Schools storm shelter, which had to be put to use last Friday.

In 2015, Peggs School bought 20 storm cellars for the school grounds. Students and adults had to go in them two times last Friday.

Part of a 2015 bond helped build the Hulbert Public Schools storm shelter, which had to be put to use last Friday.

State law requires that all public schools conduct no less than two tornado drills each year, and many Cherokee County schools had to put that practice to work twice last Friday as tornado warnings covered the area.

Three waves of severe storms ran through the county during the school day, and ultimately, an EF-1 tornado was confirmed to have hit the Park Hill and Keys areas.

While students at Tahlequah Middle School and others were confined to bathrooms and locker rooms during the tornado warnings, other schools are equipped with storm shelters or cellars.

The Peggs area is too familiar with the damage tornadoes can do, as one struck the area in May 2019 and left damage to homes and the school.

"We're fortunate that we now have technology and can track approaching storms and watch the radar closer. If I see a system is coming our way, I prep the teachers and assistants," said Peggs School Superintendent John Cox. "We're fortunate to be able to take the kids out so they're safe in the shelter."

In 2015, Peggs School bought 20 storm cellars for the school grounds, and classes have designated cellars to help avoid more confusion.

At Briggs School, the front part of the cafeteria is a safe room able to withstand an F-5 tornado, according to Principal George Ritzhaupt. Made of cement, cinder blocks, and rebar in concrete, the shelter was built in the early 2000s, and is large enough for the school population, plus community members.

"We can get the entire school in the safe room and lock down in five minutes. We don't unlock until the threat is over. The safety of the kids comes first," said Ritzhaupt. "It's for the community, so even when we're not in school, someone comes in and opens it."

The in-ground shelters at Lowrey School are also available to community members when school is not in session.

"They are left unlocked for the community to use on nights or weekends during emergencies," said Lowrey Public Schools Superintendent Cris Wyse. "We are very fortunate that three years ago, Cherokee Nation provided funding to purchase shelters. There is ample room for everyone."

As with other schools, Lowrey students and staff went into the shelters twice on Friday, and bus routes were delayed when another storm surged through the county.

"We went into the storm cellars two times for 30 minutes each," said Cox. "The system went west of us by about three miles at noon, and about two miles to the east around 2 p.m. There was a break in the weather before the third wave, and that gave us time to get students into the cars. We had the buses wait."

Grand View School administrators gave parents the option to pick students up early Friday and altered the normal procedure to make it faster.

"We had a significant number of students who were able to be picked up early, possibly as much as 25 percent," said Ed Kennedy, Grand View School superintendent. "No storm shelters are available at our school. The design and construction of the facilities give us locations that provide reasonable safety options."

Communication plays a large role in getting through an emergency safely, and many schools use mobile apps, social media, and mass callings to keep families informed.

"We communicated to parents via Facebook and sent a call to every parent in our district, ensuring them we have all students safe and secure," said Hulbert Public Schools Superintendent Scott Kempenich. "Hulbert Public Schools has a storm shelter thanks to our awesome community members who passed the bond in 2015. When the weather gets bad, many parents want to get their children, but having them in a tornado-rated building is probably much safer than moving them out into a vehicle or taking them to a house that is not rated for the potential weather emergency we might be facing."

Kennedy encourages parents to make sure they have provided the school with their correct and up-to-date contact information for emergency notifications, and to be patient and trust the school.

"Understand that your school wants every student safe and protected. If you arrive to pick up your child during a stormy time, the school official may strongly suggest that your student remain in their safe space at the school. School personnel will likely invite you inside to be with your child," said Kennedy. "Our facilities are much safer than trying to outrun a storm or risk being caught driving back to your home."