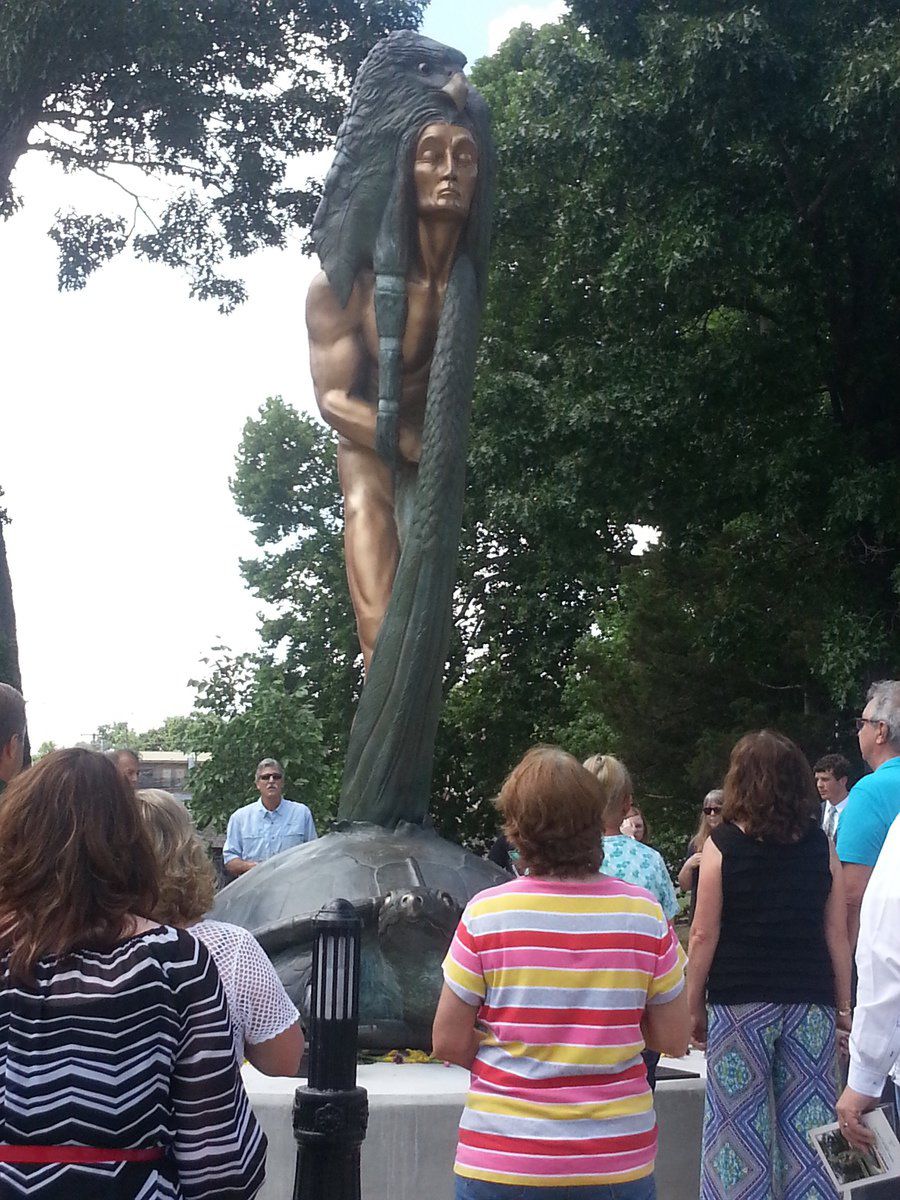 Guests of the Tuesday unveiling ceremony get a closer look at the "Monument to Forgiveness" at Beta Field on the campus of Northeastern State University. 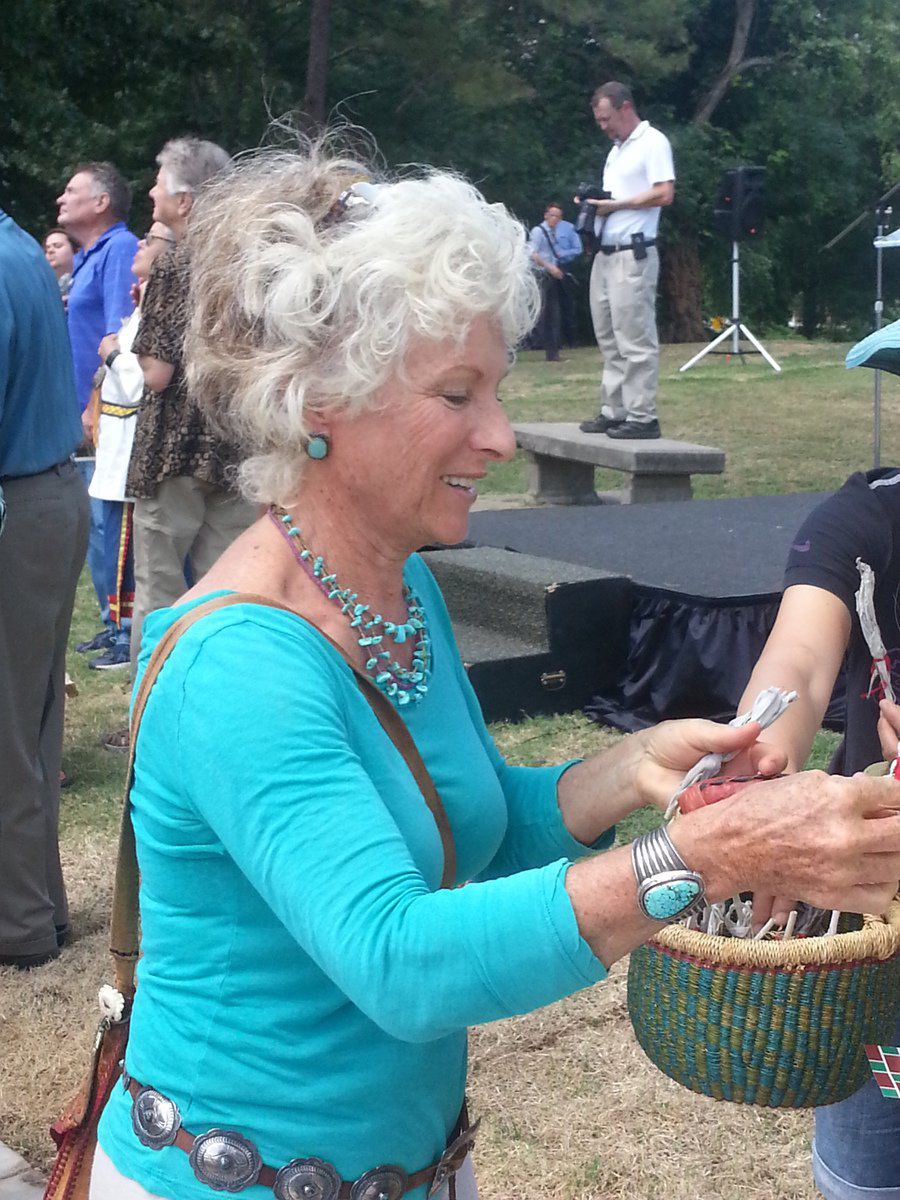 Frances Jansen, sculptor and donor of the "Monument to Forgiveness" at Northeastern State University, hands out bunches of sage during the unveiling ceremony on Monday at Beta Field.

Guests of the Tuesday unveiling ceremony get a closer look at the "Monument to Forgiveness" at Beta Field on the campus of Northeastern State University.

Frances Jansen, sculptor and donor of the "Monument to Forgiveness" at Northeastern State University, hands out bunches of sage during the unveiling ceremony on Monday at Beta Field.

Braving the morning humidity, about 100 people gathered Monday for the "second unveiling" of a towering sculpture at Beta Field on the campus of Northeastern State University.

The "Monument to Forgiveness," which had stood before at NSU during its peripatetic past, was unveiled at its final stop during a ceremony attended by the sculpture's creator, Frances Jansen.

"This monument was financed by a man who I never met out of Amsterdam," said Jansen, a native of the Netherlands. "It's the way spirit works. I know that one little lady and a monument cannot do all the work of every single one of us to bring peace and reconciliation."

"Monument to Forgiveness" is intended to represent a rapproachment over the tragic past between indiginous Americans and those descended from beyond the West; particularly the forced marches of the Cherokees on the Trail of Tears from their homeland in the Carolinas and Georgia to Indian Territory. Thousands perished during the Removal.

"It's time that this heaviness was lifted, so that we can look at each other again, standing straight and tall with humility," Jansen said. "We have learned through these experiences what love is not. We can practice more clearly what love truly is. It has nothing to do with the color of our skin or our cultures. We are one human family."

Though the end of the Trail of Tears was deemed an appropriate permanent home for the statue, which depicts an American Indian, it is also meant to encourage forgiveness between all peoples.

"This is a gift, a commemoration," Jansen said.

"This is a monument to allow us to consider the possibility. It is a gesture. It is an invitation. No can force forgiveness on another. We each have to come there in our own time."

The monument stood at NSU near the turn of the 21st Century, and also stood at the Nez Perce Indian hunting grounds on Wallowa Lake in Joseph, Ore., Southern Oregon University in Ashland, Ore., and the beginning of the Trail of Tears in Cherokee, N.C.

"This monument stood for 13 years in Cherokee," said Patty Grant, an Eastern Band Cherokee. "I think about the horrific experiences the Cherokees had to endure. That is not to say that there is any one culture in the world that has not experienced pain and trauma perpetrated by other people. On this journey of forgiveness, we begin to realize that we are all spiritually connected. We feel love and pain, just like the other."

The statue was carved from an eight-ton block of marble. The base, a turtle representing the earth, weighs nearly two tons.

The monument is a donation to NSU from Jansen.

"I want to send you a big thank you for following through on discussions that are nearly a decade old," said NSU President Steve Turner, addressing Jansen.

The assembled crowd then received an invitation from Maya Gale to offer prayers at the monument, and guests received sage bunches from Jansen and Grant to place at the base of the statue.

NSU to celebrate the addition of ‘Monument to Forgiveness’ statue

Northeastern State University is set to host an unveiling ceremony for the Monument to Forgiveness on Monday, June 20