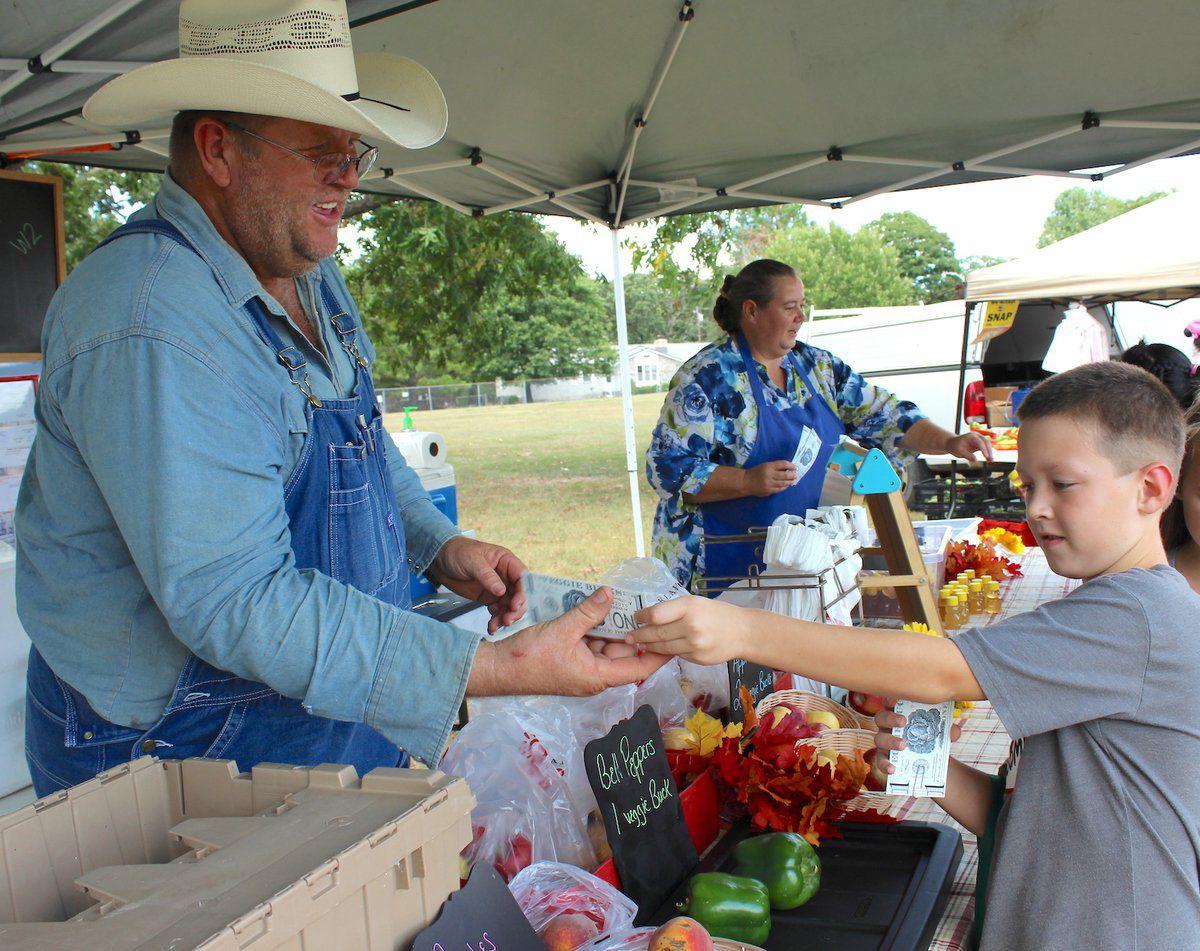 In order to make a salad for his family, third grader Alex Bowman, right, used his Tahlequah Farmers' Market Veggie Bucks to purchase a Big Bertha bell pepper from Davis Worley of Worley Farms. The market was set up Tuesday at Cherokee Elementary School. 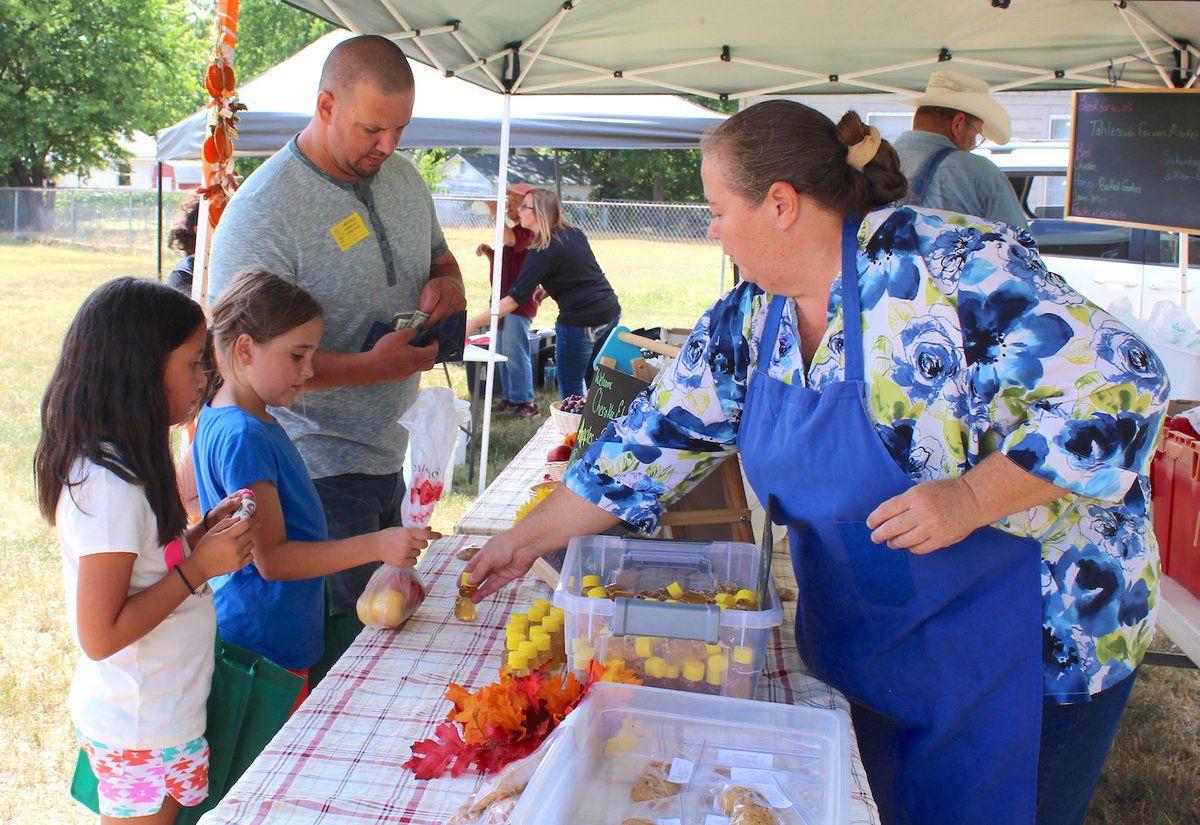 In order to make a salad for his family, third grader Alex Bowman, right, used his Tahlequah Farmers' Market Veggie Bucks to purchase a Big Bertha bell pepper from Davis Worley of Worley Farms. The market was set up Tuesday at Cherokee Elementary School.

The Tahlequah Farmers' Market shared its bounty with Tahlequah students on Tuesday.

Three regular participants of the Saturday markets set up in the Cherokee Elementary School field, and students, parents, and faculty had the opportunity to do some shopping for two hours.

Letters had been sent home with students to invite parents and families to the market. Students in third grade were each given 12 Veggie Bucks to spend on fresh goods. Tahlequah Farmers' Market prints the Veggie Bucks and the money comes from a grant.

Cherokee Nation Health Services received a three-year grant from the Centers for Disease Control in 2014. Monies from that Partnerships to Improve Community Health grant were then awarded to the Tahlequah BEST Coalition, which contracted the Farmers' Market for the program.

"We have PICH for one more year, and we hope to reach out to more schools and raise community awareness," said Hillary Mead, public health educator with Cherokee Nation.

The program has already visited Grand View School and Woodall School this year, and will be set up at Heritage Elementary, Greenwood Elementary, and in the Peggs community in the coming weeks. All third-graders will receive the Veggie Bucks.

"We target the third-graders because they are the most impressionable age for something like this," said Marla Saeger, president of the Tahlequah Farmers' Market board of directors. "We ask parents to continue with this and bring the kids to the regular Farmers' Market."

The classes were brought out one at a time and the students were greeted by Saeger and volunteers. Saeger introduced herself as the "mayor of the market" and asked the students questions about visiting the Farmers' Market. She asked if they help plan meals, go grocery shopping, and help prepare family meals.

Each student was given a pencil with the name of a herb on it. After the pencil is used to a nub, the students can plant it and grow the herb.

With reusable Tahlequah Farmers' Market bags and Veggie Bucks in hand, students raced off to the farmers' booths.

Saeger said there are three types of student shoppers: the ones who know what they like and want what they see; the ones who shop for family members; and the ones - usually boys - who want to see how heavy they can make their bags.

"After our first year, one thing we were told by teachers is, 'You have no idea how many of these kids have never seen fresh vegetables,'" said Saeger. "The kids get an important education."

The students went from booth to booth discovering fruits, vegetables, herbs, honey and more. Some knew exactly what they wanted while others needed a little assistance finding things they would like.

Student Marissa Harrington had never been to a farmers' market before. She had picked out a bell pepper, radishes, and grapes.

"I plan to eat it all. I like having my own money to spend," said Harrington.

Her friend, Gracie Rollice, chose corn on the cob, carrots and grapes.

"I like being able to buy whatever I want with the Veggie Bucks," said Rollice.

Third-grade teacher Crystal Young supervised her students and checked out what the farmers had to offer.

"My kids have been looking forward to it since they heard the market was coming. I like that it gets them excited about fresh foods," said Young.

Chris Morrison stopped by to visit the market with his second-grader and her classmate.

"I'm here to support the local farmers and get fresh produce, as well as support the school," said Morrison. "I like that it's here. It gets more people involved and lets them know it's out there."

Highlander Farms, Empire Farms, and Worley Farms were the ones present at Cherokee Elementary, but Saeger said different farms may go to the other schools. She said they like to rotate farmers, and it depends on who is available and wants to participate.

Michelle and David Worley, owners and operators of Worley Farms, said they had to rearrange their normal schedule to be there Wednesday, but it's worth the effort.

The small honey bears full of Worley Farms honey were one of the more popular items with the children. Other items snatched up quickly include peaches, corn, grapes, and apples.

Chua Thao, owner of Empire Farms, said this was her second year going to the schools.

Mead said the interaction between the students and farmers is great.

"The kids are learning social skills by interacting with the farmers and figuring out what they can afford to get. They learn about different vegetables; some haven't even seen some of the fruits and vegetables before," said Mead. "The farmers love it! They do a little education while selling, telling the kids how to grow, prepare and cook the foods. I learn things, too."

Included in the reusable bags given to the third-graders were a dozen recipe cards, an activity worksheet, and a magnet with cooking measurements on it.