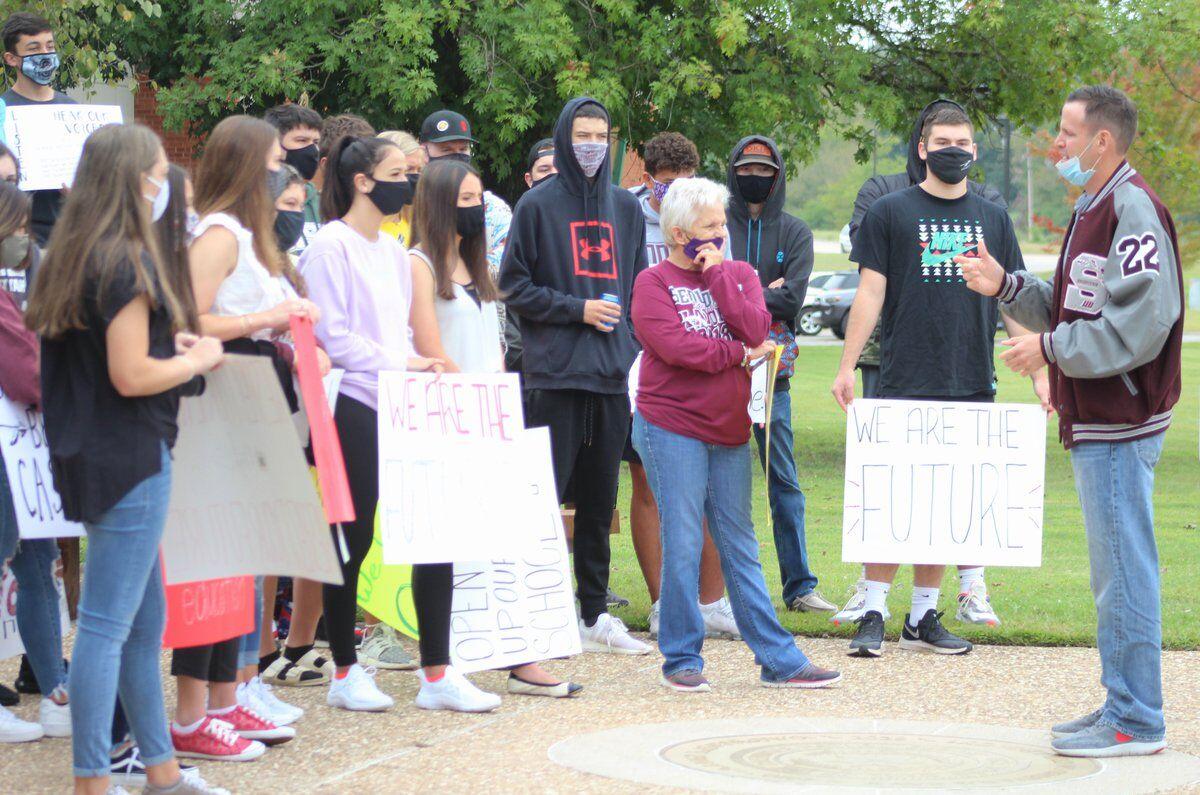 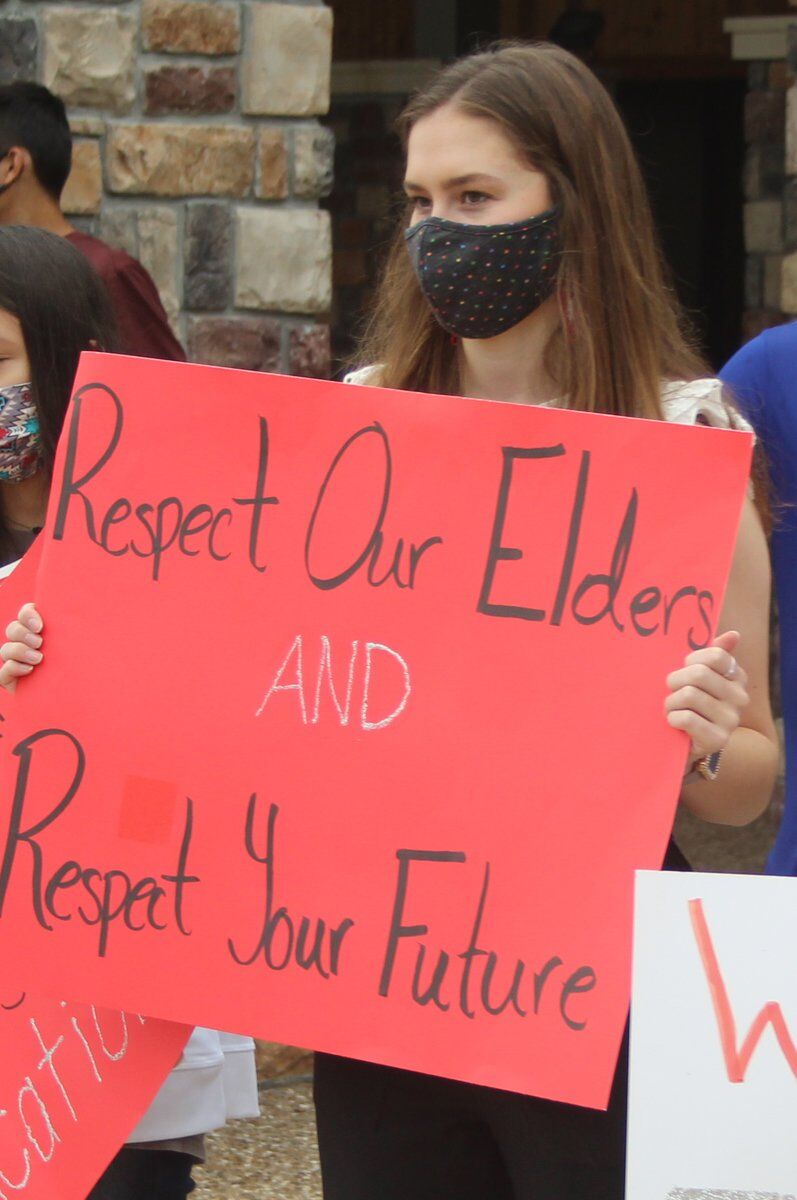 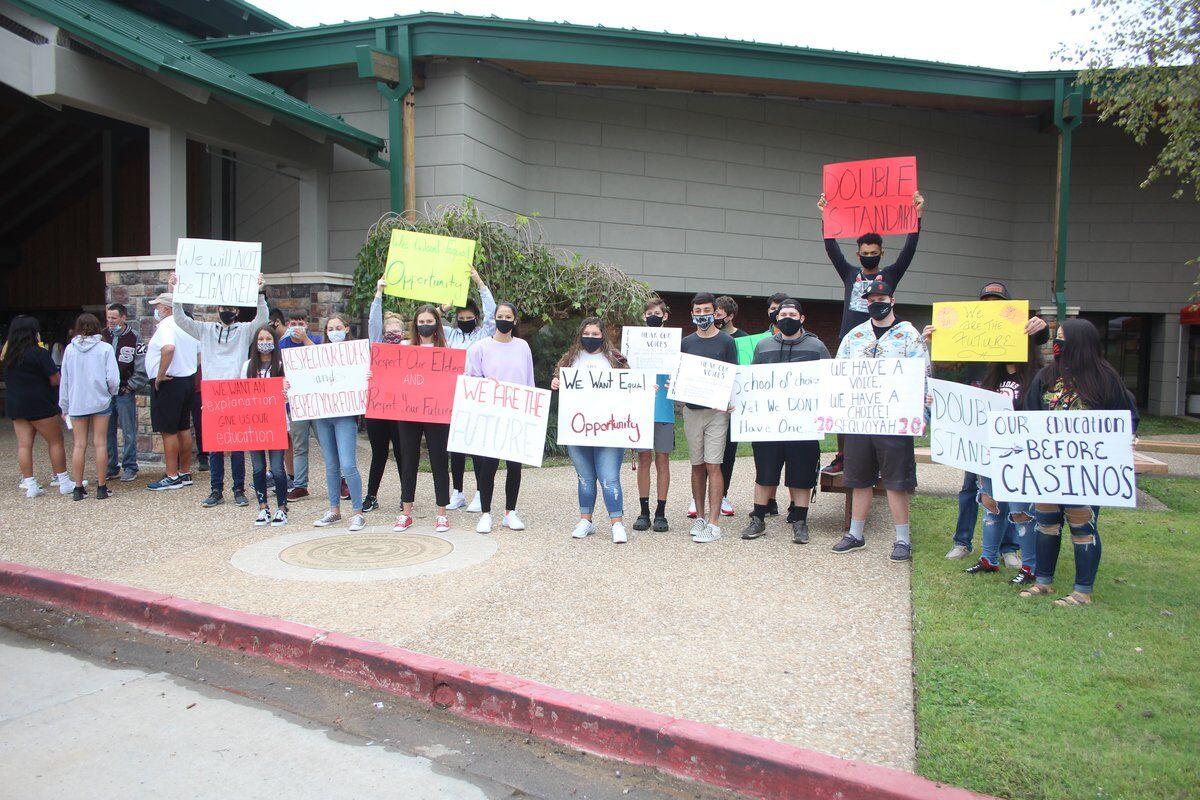 A group of Sequoyah High School students protested their lack of choice to attend class in-person outside of the Cherokee Nation W.W. Keeler Complex Thursday.

A group of Sequoyah High School students protested their lack of choice to attend class in-person outside of the Cherokee Nation W.W. Keeler Complex Thursday.

A group of Sequoyah High School students stood outside of the Cherokee Nation W.W. Keeler Complex Thursday morning to protest the tribe's decision to close the school doors and continue with curriculum through virtual learning.

While area public schools have remained open, allowing students to choose whether to attend class in-person or online, Sequoyah High School decided to transition all of its students to virtual classes after two weeks of having them on campus. Equipped with signs, the protesters voiced their displeasure with not being given the option whether to attend class in-person. They gained support from District 3 Tribal Councilor Wes Nofire, who said they should have the same opportunities as public school students.

"They're the only school that's virtual only and a lot of students have already transferred out," said Nofire. "Some of those students transferred out with Fs, because virtual learning was not working and they were not getting another option to come in and learn."

As of Wednesday, the Cherokee Nation surpassed 2,000 positive COVID-19 cases within CN Health Services, and there are currently more than 400 active cases. The tribe has ordered more personal protective equipment, and touchless sinks, toilets and water fountains for when students can return to Sequoyah. However, Principal Chief Chuck Hoskin Jr., who commended the students for exercising their First Amendment rights to assemble, said that won't occur until the tribe sees improvement in coronavirus numbers.

"The decision, as it always is with our decision at Cherokee Nation in terms of COVID response, is based on medical science, facts, and compassion," said Hoskin. "The spread of the virus is and has been too dangerous to gather in school buildings, when we have the technology to do distanced learning. We have an opportunity to protect not only the kids, but the teachers and the staff; and not only the kids, the teachers and the staff, but those Cherokee elders that live in the communities where these kids call home."

While the group of students claimed they are taking the ongoing pandemic seriously, they also pointed to the surrounding schools that have students returning to class. Ryly Ziese, a senior at SHS, said they understood that not all people want to go back to school, but if they were given a choice, she thinks with certain precautions in place it could be done with minimal concerns.

"A lot of kids that are straight-A kids are failing because of the virtual stuff," she said. "Most teachers aren't prepared for virtual, so they don't know how to handle it. It's hurting the kids a lot more than people think, and we just want the chief to know that and give us the choice to go back to school."

For seniors, 2020-2021 is the last year to participate in extracurricular activities. Some students hope to receive athletic scholarships, which is difficult to do when there are no sports seasons to compete in. Asa Robbins, SHS senior, said she hopes to be able to compete in track this year, but wanted to clarify that their protest was not about getting students back on the field.

"A lot of people are thinking we're over here moaning about not getting to play sports, and that's not the scenario," said Robbins. "Right now we're focused on education first and sports second, because we have kids failing."

Robbins said she's heard of maybe 50 students who have already transferred out of Sequoyah, and that it seems like every day she has to tell a fellow classmate "best of luck."

Hoskin said he sympathizes with the students and wishes they could return to class, adding that it's regrettable when any student leaves SHS. However, he also said the number of transfers will not influence the tribe's decision when it comes to reopening the school, but will rather be dictated by the "science of the pandemic."

"Given the spread, we're not coming back anytime soon," he said.

"There would have to be a dramatic change in the statistics on COVID spread in our communities. I visit all the time with our public health staff and our other expert advisors to get input, but ultimately I have to do what I think is best to protect the well-being of the students and the communities where they live."