More than 30 protesters, along with Tahlequah Mayor Sue Catron, took a knee for 15 minutes at Norris Park on Friday, Sept. 4. 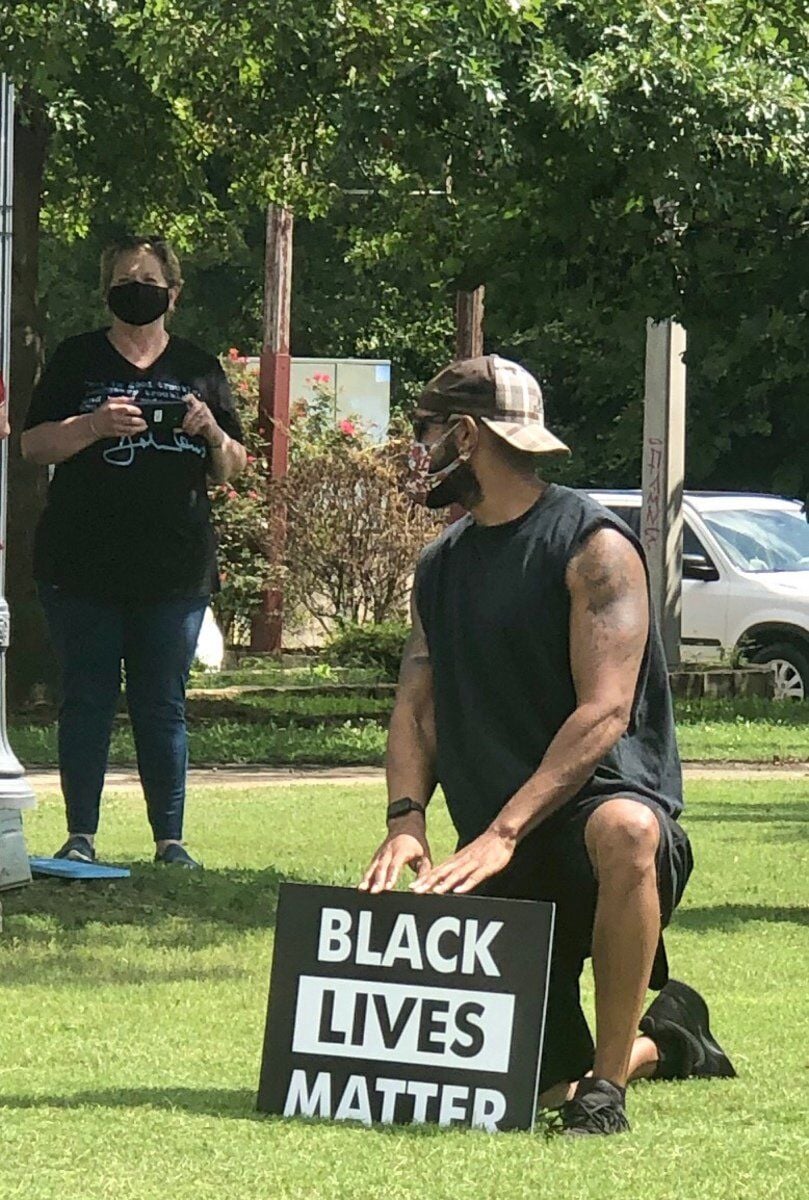 Cathy Cott and Stanley Swain kept an eye out while they knelt in Norris Park. A local man purportedly said he would return to the park with his friends.

More than 30 protesters, along with Tahlequah Mayor Sue Catron, took a knee for 15 minutes at Norris Park on Friday, Sept. 4.

Cathy Cott and Stanley Swain kept an eye out while they knelt in Norris Park. A local man purportedly said he would return to the park with his friends.

Local protesters say harassment from detractors won’t stop them from fighting for equality and change.

On Sept. 3, a group of citizens knelt at noon for about 15 minutes to demonstrate their commitment to bring peace to the community and country. The group has been taking the action at Norris Park every day following the death of George Floyd, who was killed after Minneapolis Police Officer Derek Chauvin knelt on his neck for nearly nine minutes.

Since then, the world has seen peaceful protests, mass demonstrations – and at times, looting – play out across the nation on TV and social media.

On Thursday, Tahlequah resident R.D. Armstrong approached the group and began to question their motives. Cell phone video captures the 16-minute encounter, during which words were exchanged and fingers were pointed.

While protesters such as Stanley Swain and retired NSU Professor Dr. John Yeutter remained kneeling, an unidentified woman got close to Armstrong, and put her hands on him at one point.

“Somebody tell me what your plan is. What makes Black lives equal? What would create equality?” Armstrong asked. “This gentleman told me that Black lives were not and that there was some kind of government system that kept them in. Yet my family has made it and they came from so poor — Indians on a tribe of less than 5,000 people living on a desert. Anybody can make it; it just takes hard work.”

Armstrong claimed the protesters are making themselves out to be the victims.

“Isn’t it racism to think if a person of color walks down through here that you need to help them? Can’t they help themselves?” Armstrong said.

One protester said his family has experienced racism at the hands of law enforcement when they’ve been pulled over.

“They got pulled over several times and the cops separate them and they ask the Black man if they know what color the white woman’s skin is. That’s the point here,” the man said.

Armstrong said the tactic is all part of an “investigatory technique.”

“You pull two people aside and see if they have the same story. It’s got nothing to do with race,” Armstrong said. “You understand the police officers shoot more white people than they do Black people, right?”

Armstrong then blamed public school teachers on where the “crazy ideas” are coming from.

“They’re programmed by their socialist instructor. If we had a system where tax money was divided up equally — rich schools/poor schools – [or] you took a voucher and you hung up in your education, private or public. You want math education, but not we’ve got to stay with the teacher unions you guys have dumbed down,” Armstrong said.

When Armstrong compared the protesters to "Antifa" members, the unknown woman got in his face, and Armstrong said he believed she had ingested "mind-altering chemicals." Swain encouraged the woman to not take Armstrong’s words personally and to step down.

The argument was then directed toward a protester who was adjusting his mask. Armstrong, who wasn’t wearing any type of face covering and thus violating city ordinance, lectured the man about sanitation and how to properly wear a mask.

As protesters stood to leave, Armstrong purportedly said he would return the next with friends.

On Sept. 4, more than 30 protesters, along with Mayor Sue Catron, gathered at Norris Park and took a knee at noon. This time, tensions were high as they anticipated Armstrong’s return.

However, he did not show up, and the only comment made toward the group was from a young man who yelled, “All lives matter!”

Participant Teddye Snell said that despite Armstrong’s stance with the group, protesters have dealt with those who have screamed at them and even followed them to their cars to intimidate them.

“We’re normally out here every day and we’ve been screamed at before,” Snell said. “[Armstrong] was a little kinder but the one guy we had out here, he was spitting venom.”

Snell said she hasn’t had to call the Tahlequah Police Department as a result of an altercation while kneeling.

“One time, one of the members did, and they said the opposite side has an equal right to counterprotest, and as long as there’s no violence,” Snell said.