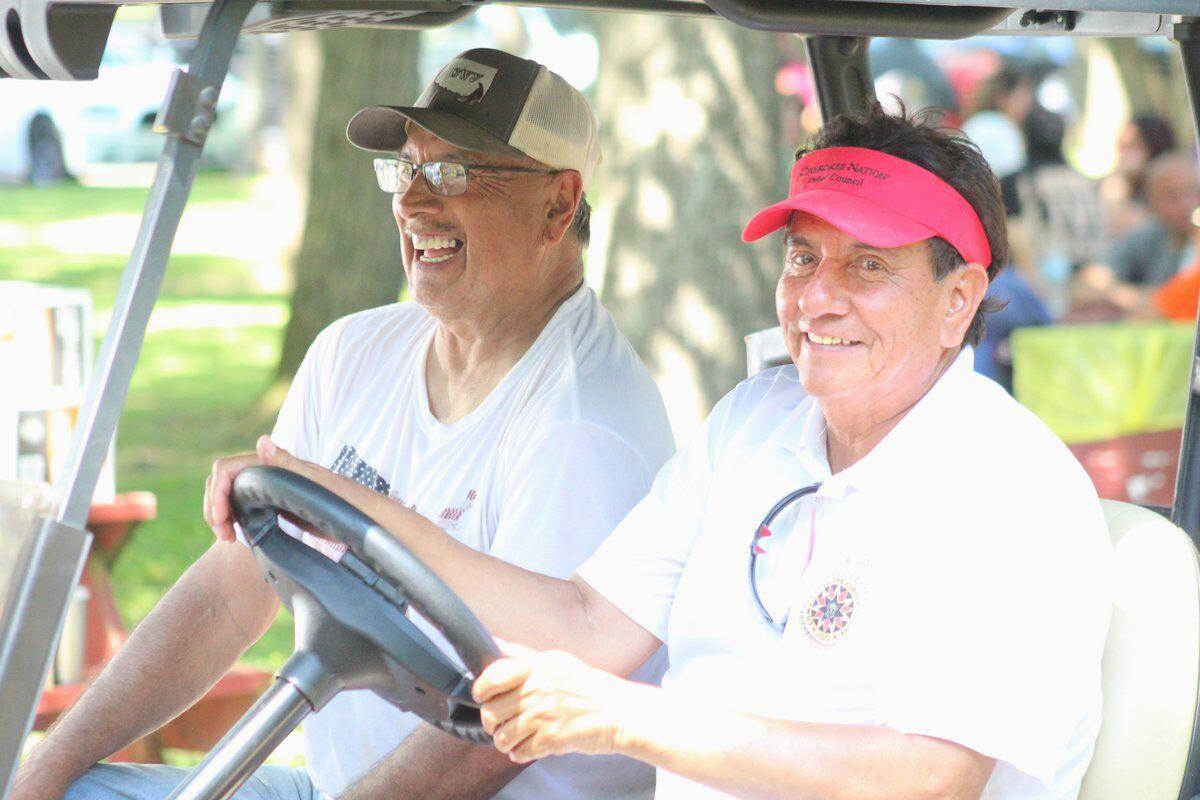 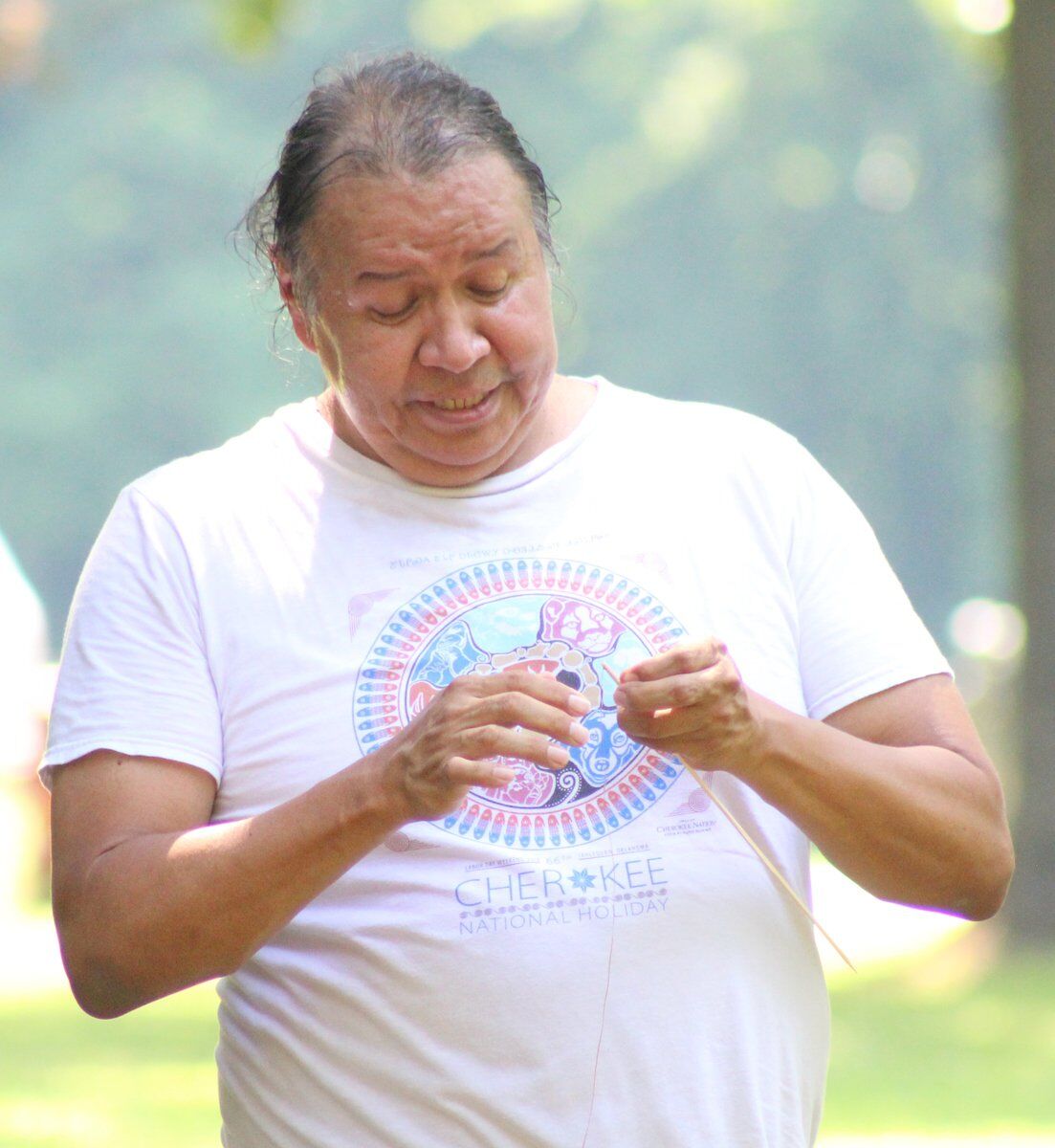 Robert Lewis works on a blowgun dart at the Cherokee Heritage Center. 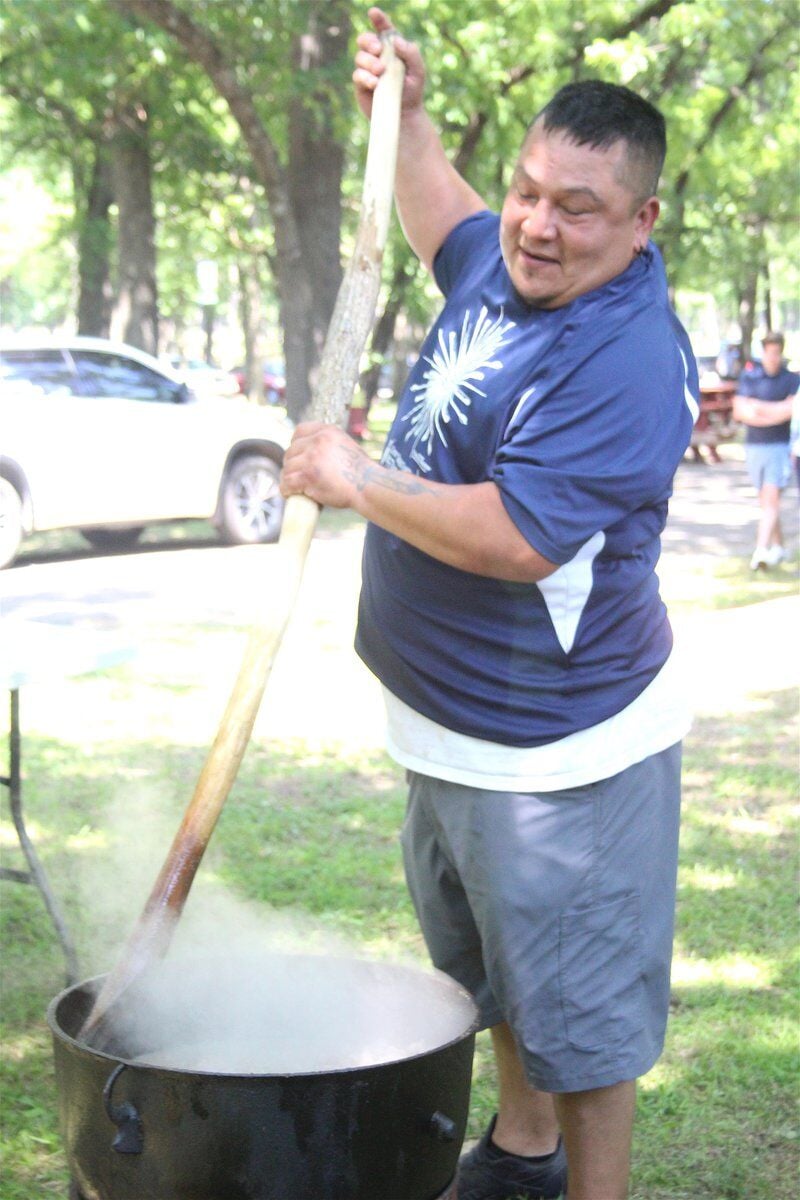 Robert Lewis works on a blowgun dart at the Cherokee Heritage Center.

In the scorching heat on the Heritage Center grounds, Cherokees spent several hours preparing a group meal. Jared Davis was on hog-frying duty, and he cooked 75 pounds of pork low and slow, stirring the pot as he stood in the shade.

"This a traditional hog fry," Davis said. "A lot of Cherokee people do this for celebration - birthday dinners and anniversaries. It's hard to find a cook. It looks easy, but there's a lot to it."

Every hog fry chef has his own style, according to the men gathered around the various campfires. Davis likes it to cook on a smaller fire, so it doesn't scorch the meat, but makes sure it's cooked thoroughly. In his hand was a tree branch he had shaved the bark off of to stir the pot.

"All Cherokees enjoy these. You talk to any Cherokee and they're going to tell you about a hog fry," said Davis. "It's one of those traditional things we do."

In charge of the beans was Rob Daugherty, who cooked 25 pounds of the legumes in about two hours. While he's not as used to taking care of the beans, he said everyone involved in cultural meals has a chance to lend a hand and take turns in the process.

"This is only my second time cooking beans. Usually I do the hog frying," he said. "I've been doing that since I was knee high. We just kind of pass it on and everybody does it. The old way, when we were younger, we didn't have Reasor's to go get hog meat. You killed him and put him up on a tree."

On the schedule for the cultural games were marbles, cornhole and blowgun contest. Both Davis and Daugherty planned to play some marbles at the Heritage Center - something they both have done since they were little.

"I've been playing marbles ever since I was a little one," Davis said. "I go do demonstrations at schools and tell them I've been doing this since I was their age. We had a marbles in the backyard with lights set up, and we'd play marbles all night long. "

As the men stood over their respective pots, Cherokee Nation Tribal Council Speaker Joe Byrd approached and told them they would have survived the Trail of Tears had they been alive then. He said the outing was a celebration in more ways than one; it was a gathering of the Tri-Council, but also a celebration of the 200th anniversary of the Sequoyah Syllabary. He said he was happy to see the group of Cherokees gathered, despite the heat.

"Everybody came together like this, and not too many different ethnic groups will actually do what these guys are doing," Byrd said.

"If you'll look, they're all just sitting under the shade. Most of the non-Native people are sitting in their air conditioning, probably drinking iced tea. But these people are really tough. They do it because they were raised this way. This is who they are."

Cherokees new and old sat around and told stories with one another, including one on the appropriate way to approach a Cherokee woman when courting her.

They fried fish and made Indian tacos.

Behind them was the Diligwa 1710 Cherokee Village, which Byrd said was the perfect place to host the gathering of the three tribes.

"We talk about how fortunate we all are to have three governments - three federally recognized governments - that we can call our brothers and sisters and visit with one another," Byrd.

"The federal government has not been able to really keep us down. Listen to the laughter here. It's almost 90-something degrees, and they're just over here laughing and telling stories. This is the Cherokee way right here."

A gathering to sing gospel music will be under the Peace Pavilion in Tahlequah at 6 p.m., Thursday. The Daily Press will also be on hand to cover the Tri-Council meeting Friday, which is not open to the public.