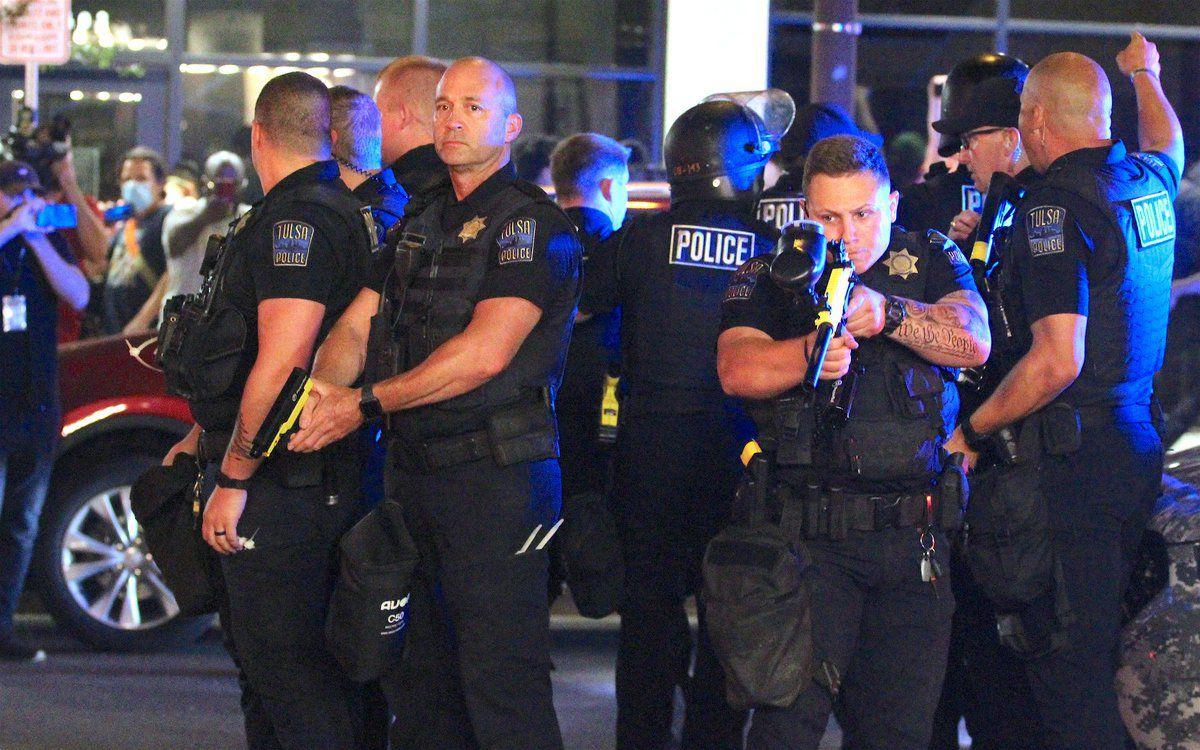 A group of Tulsa Police Department officers exited their vehicles for a brief period Saturday night, outside of President Donald Trump's campaign rally, to disperse a crowd of people who were blocking traffic in downtown Tulsa. 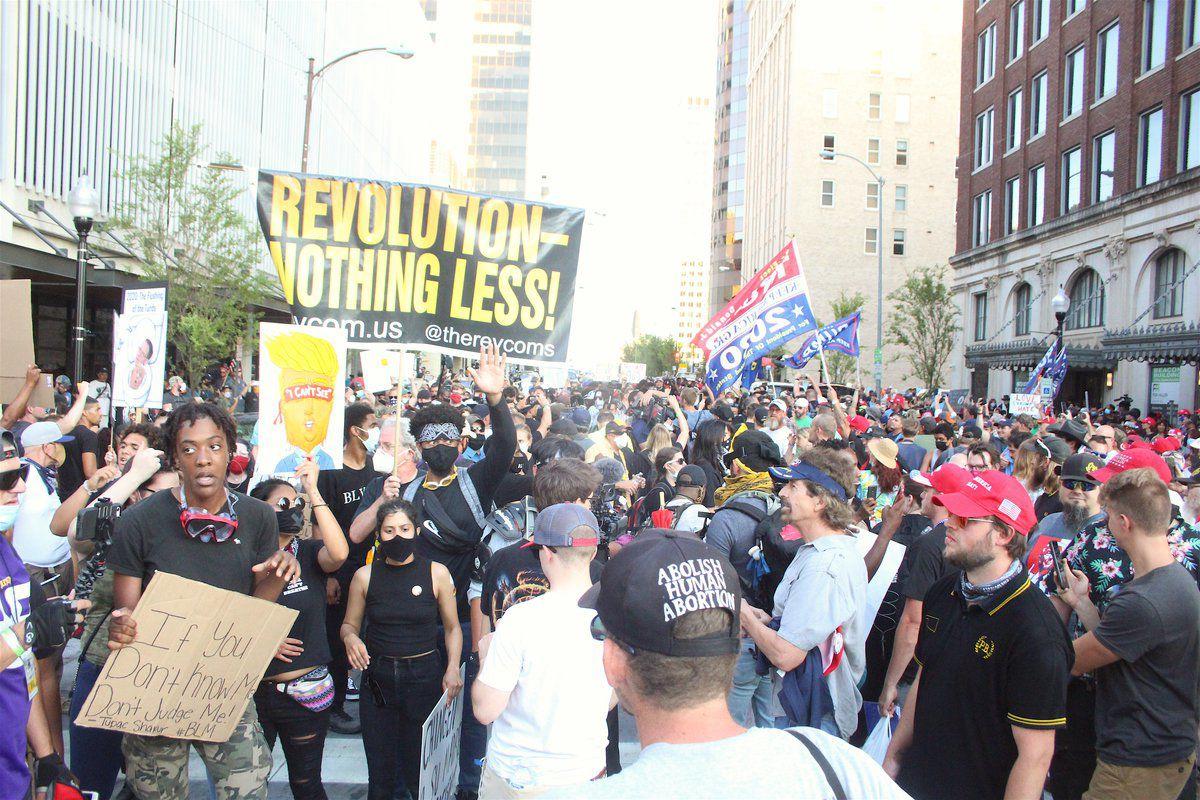 A group of Black Lives Matter demonstrators walk past supporters of President Donald Trump at his campaign rally in Tulsa. 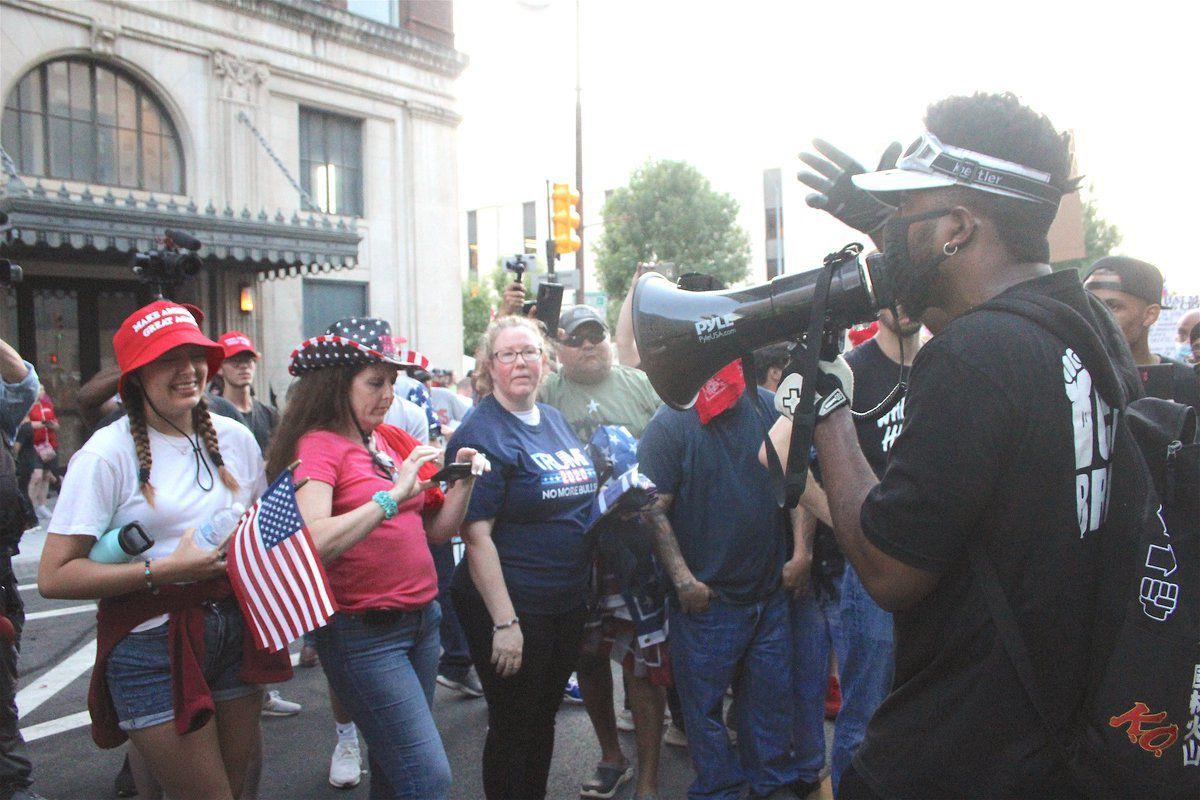 A Black Lives Matter demonstrator uses a megaphone to speak with supports of President Donald Trump outside of his campaign rally in Tulsa.

A group of Tulsa Police Department officers exited their vehicles for a brief period Saturday night, outside of President Donald Trump's campaign rally, to disperse a crowd of people who were blocking traffic in downtown Tulsa.

A group of Black Lives Matter demonstrators walk past supporters of President Donald Trump at his campaign rally in Tulsa.

A Black Lives Matter demonstrator uses a megaphone to speak with supports of President Donald Trump outside of his campaign rally in Tulsa.

The scene outside, and inside, of President Donald Trump's campaign rally in Tulsa was not what many had expected Saturday.

Several blocks surrounding the BOK Center in Tulsa were sealed off, businesses throughout the downtown area were closed - some boarded up - and members of the Oklahoma National Guard were situated in various spots to run checkpoints and assist with law enforcement efforts.

Although there were some shouting matches between Trump supporters and Black Lives Matter protesters, as well as a few pepper balls fired by Tulsa Police Department officers to disperse the crowd, there was no serious outbreak of violence, looting, or rioting that many had anticipated.

A group from Tahlequah made the trip Saturday to volunteer as ushers inside of the arena. Josh Owen, Cherokee County Republican Party chair, was one of them, and he said he didn't want to miss an "historic opportunity" to see the president and Vice President Mike Pence.

"I had a different experience than a lot of people, because I worked a lot that day," he said. "You could tell everyone was really excited. Whenever they let the first group in, everyone was trying to run down to the floor to get the best seats. It was kind of our job to make sure everyone was staying safe and getting where they needed to be."

Before the weekend, the Trump administration and local officials were expecting a crowd of around 100,000 to show up near the arena. However, the Tulsa Fire Department reportedly stated fewer than 6,200 people entered the BOK. A member of Trump's campaign team has disputed those numbers, claiming the attendance was closer to 12,000.

Josh Allen, a local resident who also volunteered to usher attendees at the event, is Tahlequah High School's band director. He said the only section of the arena that wasn't packed was the upper level. One thing he said was clear was a noticeable "dispute going on between the Trump campaign and the BOK Center people."

At around 6:30 p.m., Pence addressed the crowd before exiting for the president, who made his way onto the stage a little after 7 p.m. Trump took the podium to speak to his supporters for over an hour and a half.

Allen said not all of the president's words "line up perfectly" with his personal beliefs, but he agreed with most of what he had to say.

"I don't know if I've ever had anyone running for office or president that I believed 100 percent of what they did," he said. "You can't find that, but you can try to find someone who is the closest possible to your beliefs and to fight for what you believe in. I'm a conservative Christian, and the Trump rally was full of those. Conservative Christians were everywhere."

As the president addressed the crowd inside of the BOK Center, a group of Trump supporters was waiting outside one of the entrances, hoping to get last-minute seats to the rally, but the gate had already been closed.

Meanwhile, just down the road, another cluster of Trump fans was standing near the corner of Boulder Avenue and Fourth Street. Just as it seemed like the crowd was starting to dissipate, at around 8 p.m., a large group of Black Lives Matter demonstrators came walking down the street. There was a brief clash between the president's supporters and BLM advocates, with people seen shoving one another, before the BLM march continued on its way.

However, the BLM demonstrators circled around and revisited the location at least another three times. There was no more pushing or shoving between the two crowds, but there were plenty of obscenities thrown in both directions. At one point, a caravan of police vehicles and National Guard personnel attempted to split the crowd when a bus carrying NG troopers was approached by BLM demonstrators. Shortly after, a group of Tulsa police officers exited their vehicles from the back of the caravan and fired pepper balls in an attempt to disperse the crowd. Not long after, the street began to unclog and vehicles began traveling down the roadway.

"Inside, it wasn't that way," Allen said. "There were no protesters where we were. I didn't hear a single dissenting voice until we got done with the rally and we were walking to our car. There was a group of teenagers in their car driving down the road screaming at the people walking home, and that was it."

Many feared there would be an outbreak of violence, or even looting. But by the end of the night, the BLM protesters were seen celebrating and dancing in Tulsa's Greenwood District. Owen said the peaceful demonstrations and lack of conflicts "really spoke to the Oklahoma standard."

"Their protest turned into a big party out there," he said. "It really speaks to Oklahomans and all the movements as a whole. Even if there was a quarrel, nothing seemed like it got out of hand. It was a great picture of Oklahoma, and I thought we represented well."

President Trump warned "protesters, anarchists, agitators, looters or lowlifes" on Twitter ahead of the rally, saying they would "not be treated like you have been in New York, Seattle, or Minneapolis." Although tensions appeared high and at times the situation outside of his rally seemed volatile, the event was perhaps as peaceful as most had hoped - and far more peaceful than many expected.

"I think Tulsa showed the world how good Oklahomans can be," said Cherokee County Democratic Party Vice Chair Dell Barnes. "Trump didn't get the crowds or the fight he was seeking."

Meanwhile, state health officials are urging anyone who attended Trump's rally or any recent protests, where social distancing wasn't necessarily practiced, to get tested for COVID-19.