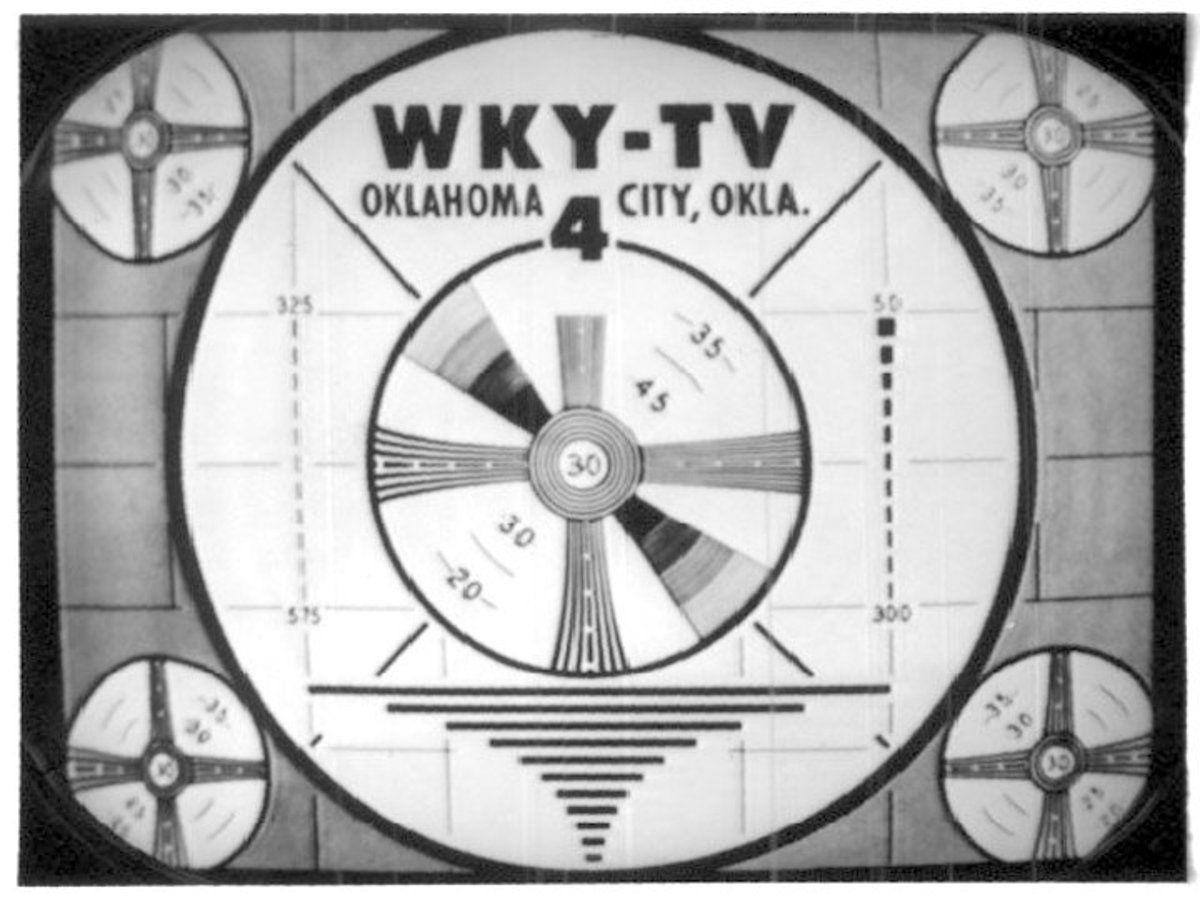 Test patterns occupied much of the airtime in the early days of television and were used by TV owners to adjust the screens of their sets, which were viewed in mirrors placed in front of the sets. 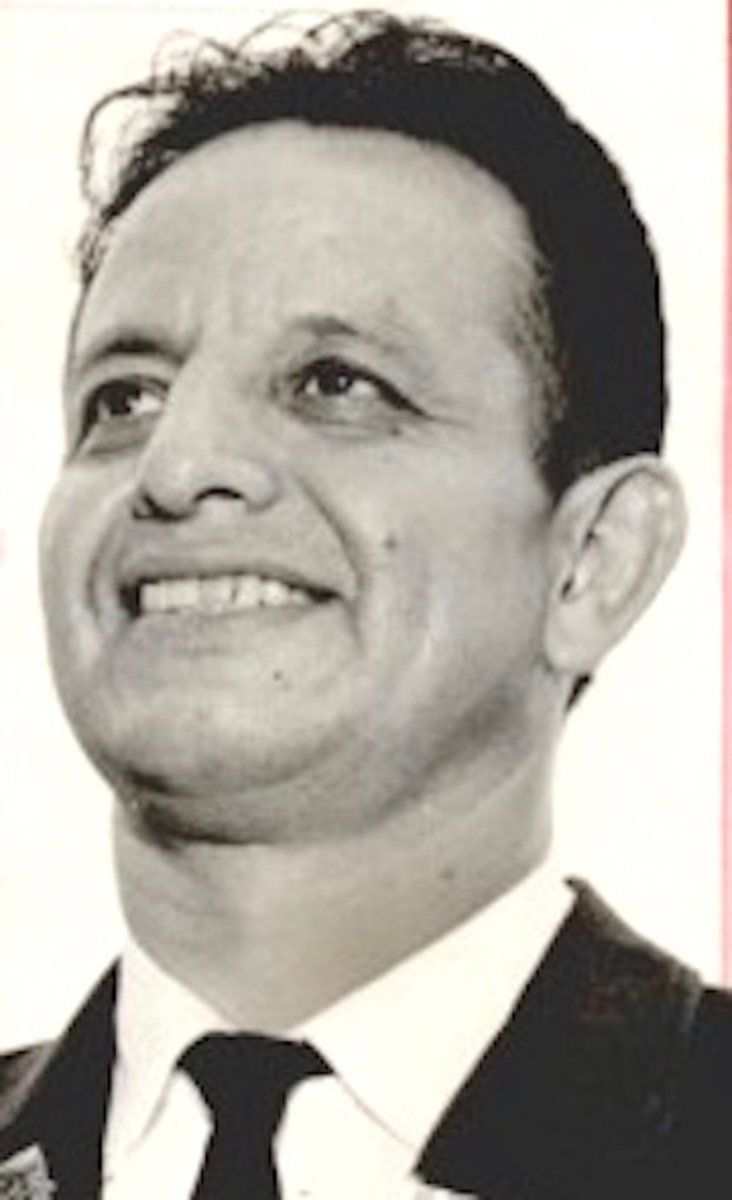 Joe Thornton was the owner of a Tahlequah radio and television sales and repair business. He was the first person in Cherokee County to receive TV signals from WKY-TV after the Oklahoma City station began broadcasting in June 1949. 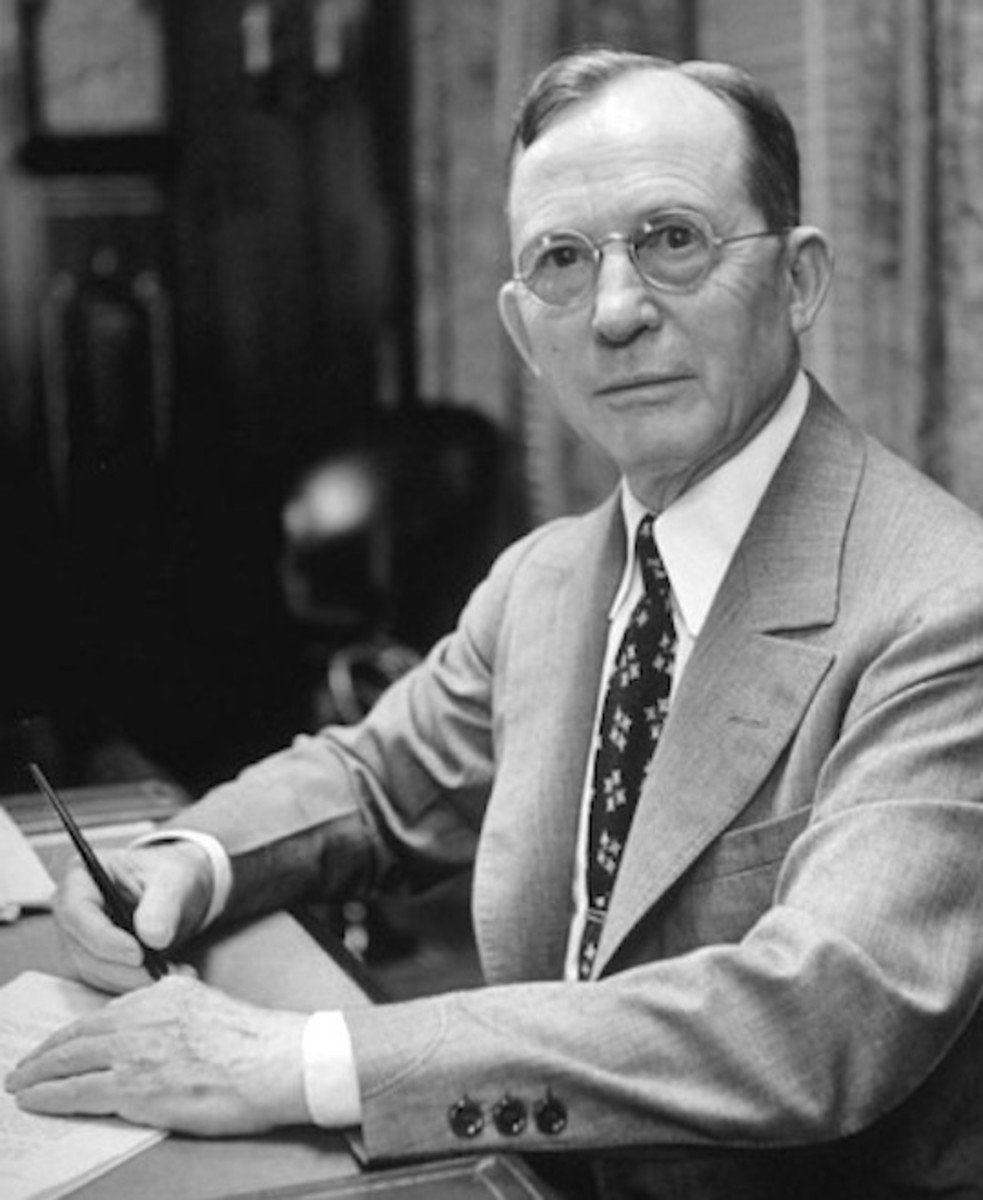 Edward K. Gaylord, publisher of the Daily Oklahoman and Oklahoma City Times and owner of WYY radio, established the first television station in Oklahoma, WKY-TV, in 1949. 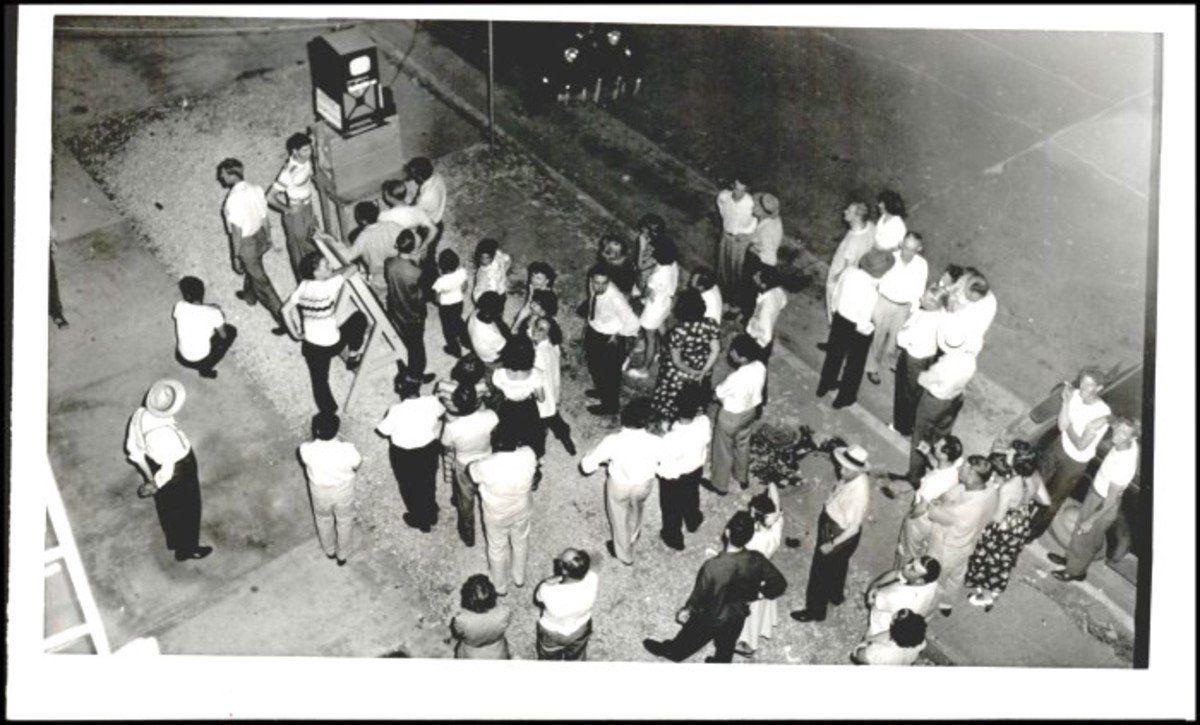 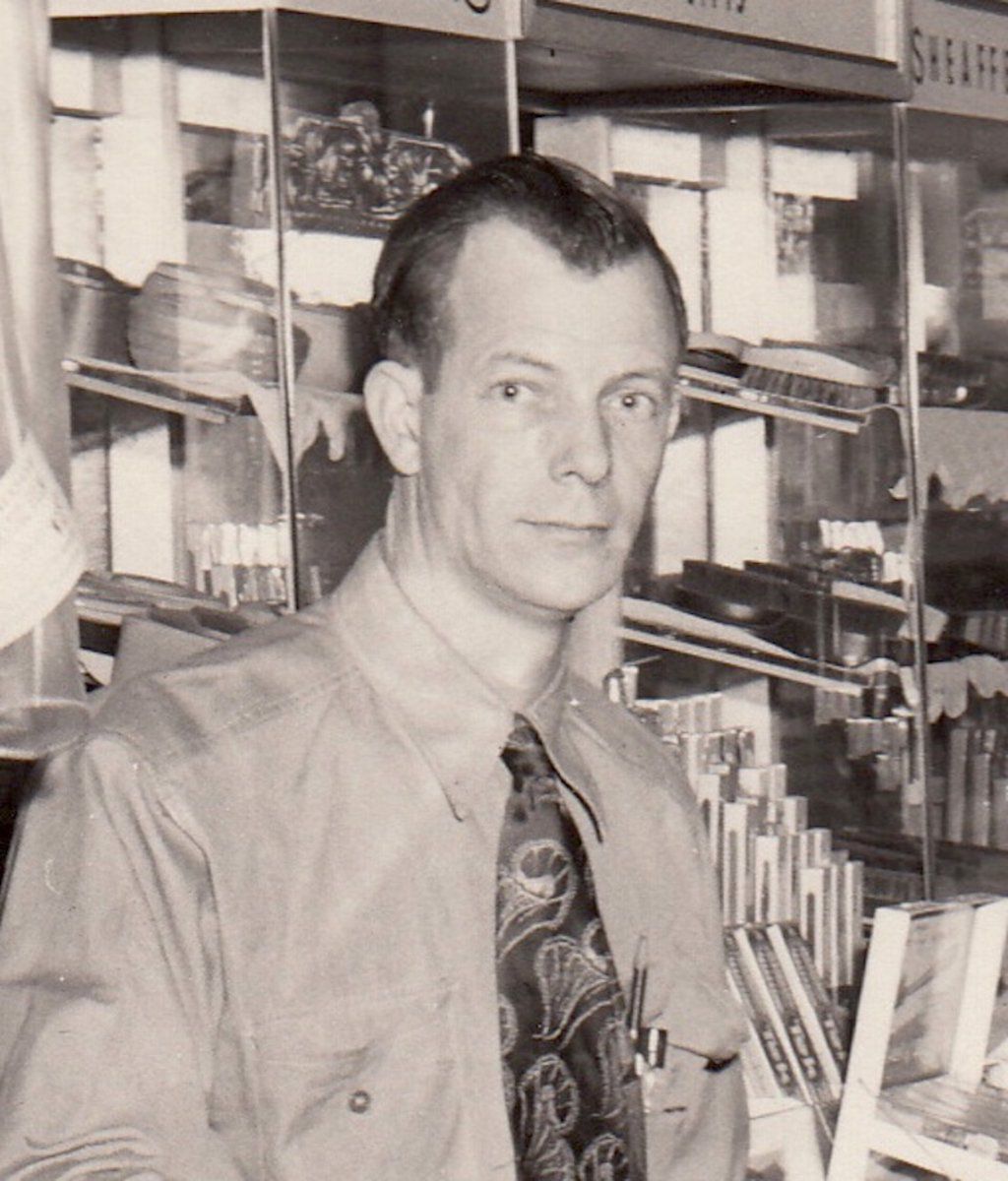 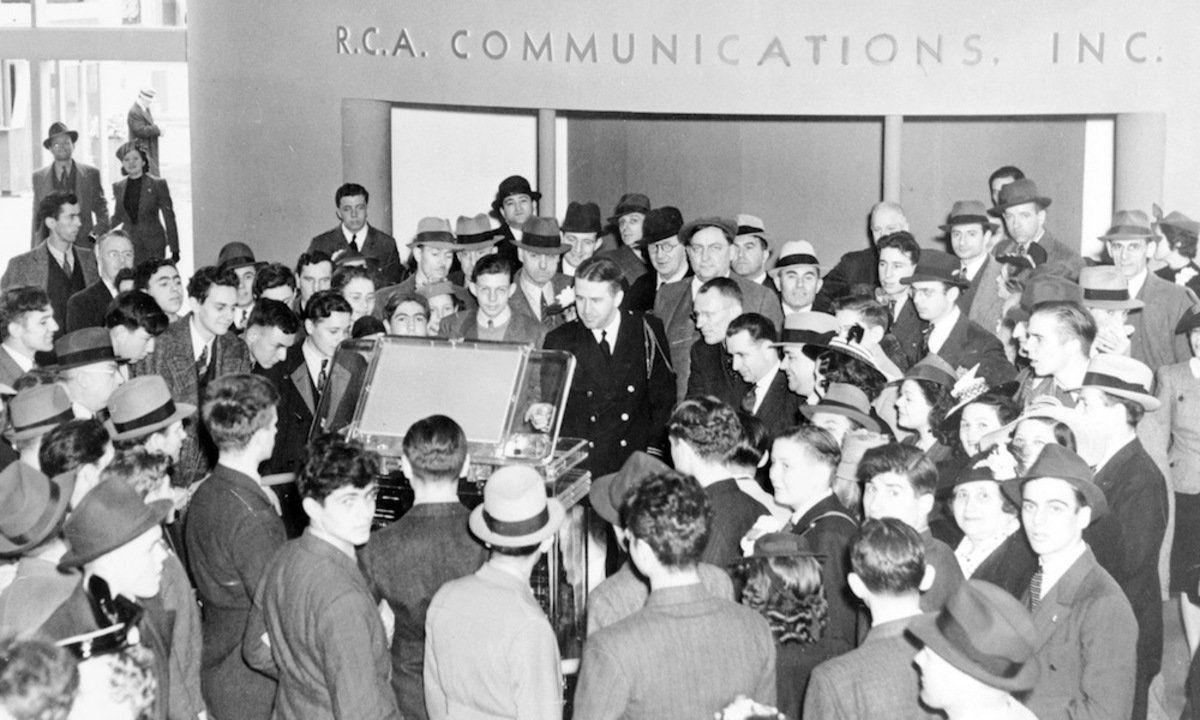 Crowds at the New York World's Fair in 1939 viewed television in the Radio Corporation of America's (RCA) Pavilion. 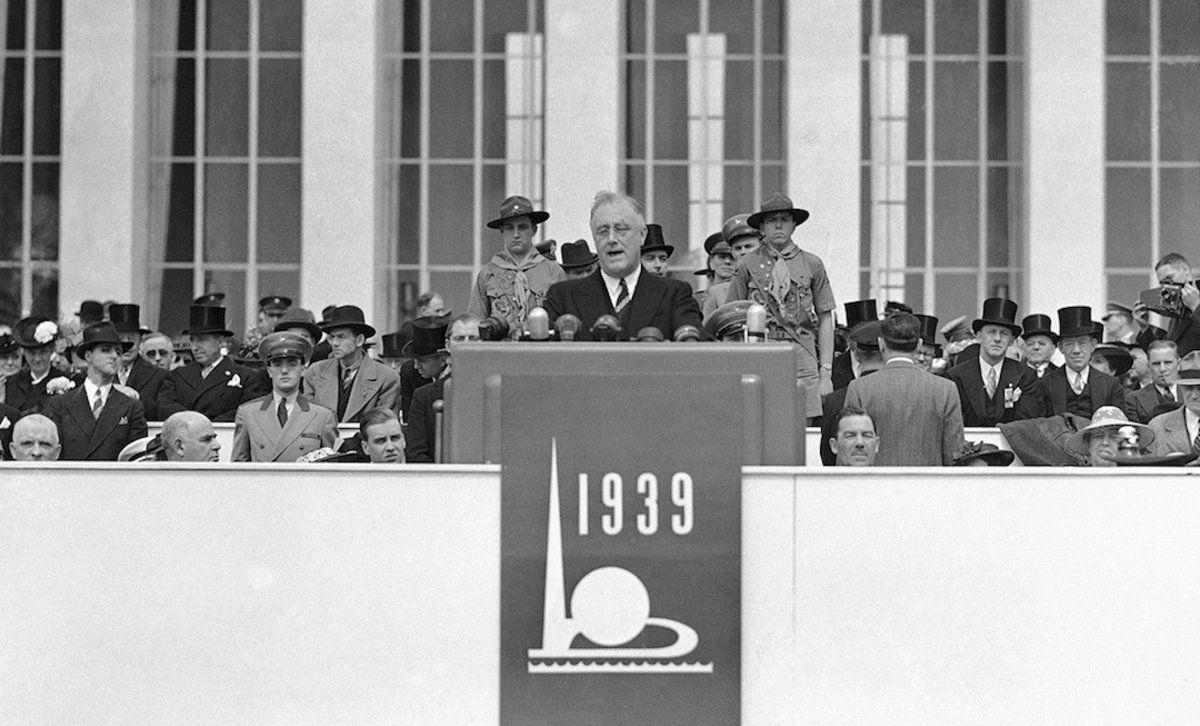 Franklin D. Roosevelt’s opening of the 1939 New York World’s Fair was the first time an American president appeared on television.

Test patterns occupied much of the airtime in the early days of television and were used by TV owners to adjust the screens of their sets, which were viewed in mirrors placed in front of the sets.

Joe Thornton was the owner of a Tahlequah radio and television sales and repair business. He was the first person in Cherokee County to receive TV signals from WKY-TV after the Oklahoma City station began broadcasting in June 1949.

Edward K. Gaylord, publisher of the Daily Oklahoman and Oklahoma City Times and owner of WYY radio, established the first television station in Oklahoma, WKY-TV, in 1949.

Crowds at the New York World's Fair in 1939 viewed television in the Radio Corporation of America's (RCA) Pavilion.

Franklin D. Roosevelt’s opening of the 1939 New York World’s Fair was the first time an American president appeared on television.

From Tahlequah's establishment in 1839, the pace of change accelerated almost exponentially, but few innovations were as transformative as television.

The basic technology of capturing waves of energy flashing through the atmosphere at the speed of light and converting them into moving images with sound developed in the half century from the 1880s through the 1920s.

From 1928 through 1938 broadcasters in the United States experimented with the evolving technology, but the New York World's Fair of 1939 marked the introduction of television as a feasible means of communication and entertainment.

When Franklin D. Roosevelt formally opened the fair, RCA's cameras sent his image across the city into homes of those with TV sets, making him the first American president to be televised.

World War II began in Europe five months later, but Americans hoped to remain out of the conflict, and those promoting television continued planning for its rapid expansion throughout the country.

Oklahomans unable to attend the World's Fair got an opportunity to experience TV for themselves later in the year. At the time, hope remained that the war in Europe could be ended by negotiation and, if not, America could steer clear of entanglement.

In 1936, at the dedication of the new WKY Radio studio in Oklahoma City, the station owner and publisher of two Oklahoma City newspapers, Edward K. Gaylord, had promised residents of the Sooner State when television was perfected his radio station would bring it to them.

In June of 1939, an invitation-only demonstration of TV in Oklahoma City was sponsored by a Kansas City television station established in 1933, a national manufacturer of electronic products, including TV receivers, and a local music store.

Spurred by potential competition, Gaylord organized a demonstration of television sponsored by WKY and his newspapers, open to the public in Oklahoma City's Municipal Auditorium. Featuring the resources of RCA and NBC, the event drew some 50,000 spectators for afternoon and evening presentations for six days between Nov. 13 and 18, 1939.

The event not only showcased local performers from WKY, national NBC celebrities, local talent, and style shows, it also offered the public an opportunity to be televised. The demonstration spurred interest throughout the state.

Spring 1940 brought a devastating Nazi blitzkrieg of Western Europe instead of a truce. American antipathy to the Axis powers led ultimately to the nation's entry into the war. Although regular television programing continued in New York and a few other American cities during the conflict, further expansion of the medium was postponed until the end of the fighting.

By the fall of 1944, with victory over the Axis powers within sight, Gaylord staged another demonstration of TV for the potential market his proposed Oklahoma City TV station would serve.

Again enlisting the support of RCA, which made available some of its "outstanding television personalities," the influential publisher secured the cooperation of the U.S. Treasury War Finance Committee in promoting a three-week demonstration of television as a campaign to stimulate the sale of war bonds.

From Nov. 11 to Dec. 2, a troupe of entertainers and TV technicians visited 19 cities in central and western Oklahoma giving residents who purchased war bonds an opportunity to see the potential of television. They also were able to view the images of prominent members of their own communities on small glass tubes.

After the war, despite public interest in television, high start-up expenses and an almost total absence of sets to receive transmissions delayed television's expansion into the Sooner State.

Gaylord finally redeemed his promise to bring television to Oklahoma near the end of the 1940s. In early June of 1948, the Federal Communications Commission granted a construction permit for a commercial television station in Oklahoma City.

Work was progressing steadily on Nov. 17 when a fire swept through the station studio located in the city's Municipal Auditorium, destroying $150,000 worth of equipment. Despite the setback, WKY-TV broadcast a test pattern shortly after noon on April 21, 1949.

Station engineers believed no one beyond the studio would see the image, but within two minutes, they had received a call from Watonga asking if the station was actually broadcasting.

Shortly, their switchboard was swamped with calls, including one from Denning, Ark., 218 air miles from the tower. Within a week, the station's manager announced daily programing would begin June 6.

In the evening of that day, Gaylord symbolically pushed a button marking the initial regular broadcast of WKY-TV, the first television station in the state.

The 76-year-old publisher praised the efforts of those who had put the station on the air, and claimed, "No finer television studio existed in America, and no taller transmission tower existed except for the NBC tower atop the Empire State Building in New York City."

He introduced Oklahoma Governor Roy J. Turner, who commented on the significance the advent of television for the state. Noting that more than half the states had no stations within their borders, he reflected that the medium would bring "public servants much closer to the homes of citizens."

In Tahlequah, World War II veteran Joe Thornton had opened a radio sales and repair shop at 211 N. Muskogee Ave. after his discharge from the army. He had an arrangement to sell Zenith radios from the distributor in Fort Smith, who persuaded him to add television receivers to his inventory.

Realizing he could not sell the receivers if there was nothing to receive, he set up a pole and attached an antenna 40 feet above the ground and pointed it toward Oklahoma City. Reception from a station almost 150 miles away varied with atmospheric condition, but he got a signal.

Thornton put a Zenith TV with a nine-inch, round screen in the window of his shop and turned it on when he left in the evening. Initially, WKY-TV broadcast only from 7 until 9:45 p.m., Sunday through Friday.

Jack Dobbins, who was a student at Northeastern State College when television signals first reached Tahlequah, recalled crowds clustered around Thornton's shop in the evenings.

He did not remember if they could hear the programs, but the novelty of television was compelling, with or without sound. In the early days viewers flocked to sets mesmerized by nothing more than test patterns.

The editor of the local newspaper reported he saw only "rain" on the screen, but placed an order for a receiver in anticipation of stations in Tulsa and Fort Smith. The signal from the Oklahoma City station remained weak, but Alderson's son recalled Howdy Doody and Clarabell were among the first TV celebrities he saw on the family's 8-to-10-inch round screen.

Gary Alderson particularly remember seeing his uncle, a New York City photographer, waving to the folks back home through the window of the Today Show, which debuted in January 1952. Panning people on the street was initially a means of occupying airtime, but it proved so popular with viewers that it continues to the present.

Bettye White Burchette, who first saw TV in Dallas at the Texas State Fair before Oklahoma had a station, described her reaction as "surprised, confounded, and amazed." She said she "could not understand how sound could go through the air, let alone pictures."

An article in the Daily Oklahoman the day following the debut of WKY-TV, described heavy demand for receivers in the state's capital city. Sales in Tahlequah were not as brisk, but Thornton also recalled selling "quite a few" after he put the set in his shop's window.

Reception in Tahlequah from the Oklahoma City station was problematic, and most Cherokee County residents were unwilling to spend that kind of money for several hours of snowy images six nights a week.

Before the end of the year, the few people in Tahlequah who had purchased television receivers turned their antennas from southwest to northwest pointing toward Tulsa where a second Oklahoma station had begun broadcasting only 60 miles away.

The establishment of Oklahoma's second television station was more challenging and is more interesting than the launching of WKY-TV in Oklahoma City. The origin of Tulsa's KOTV is improbable and unique.