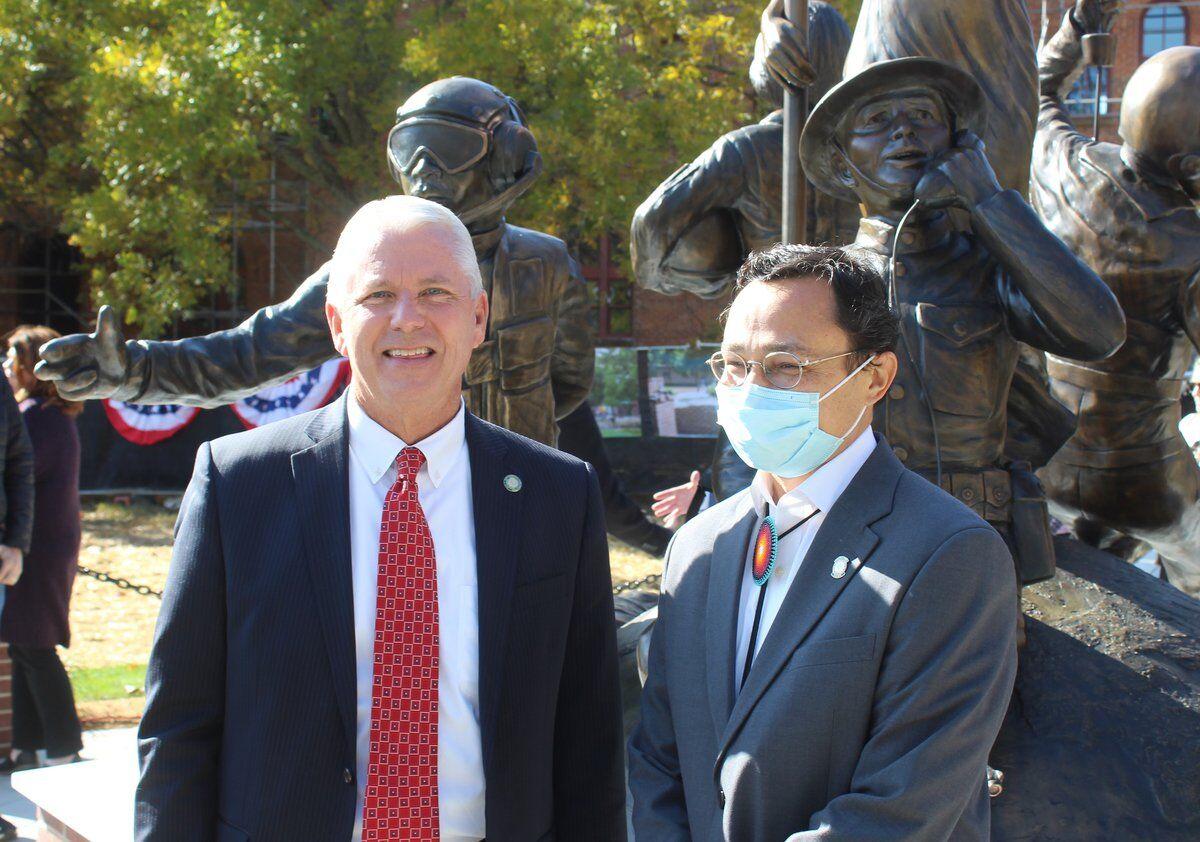 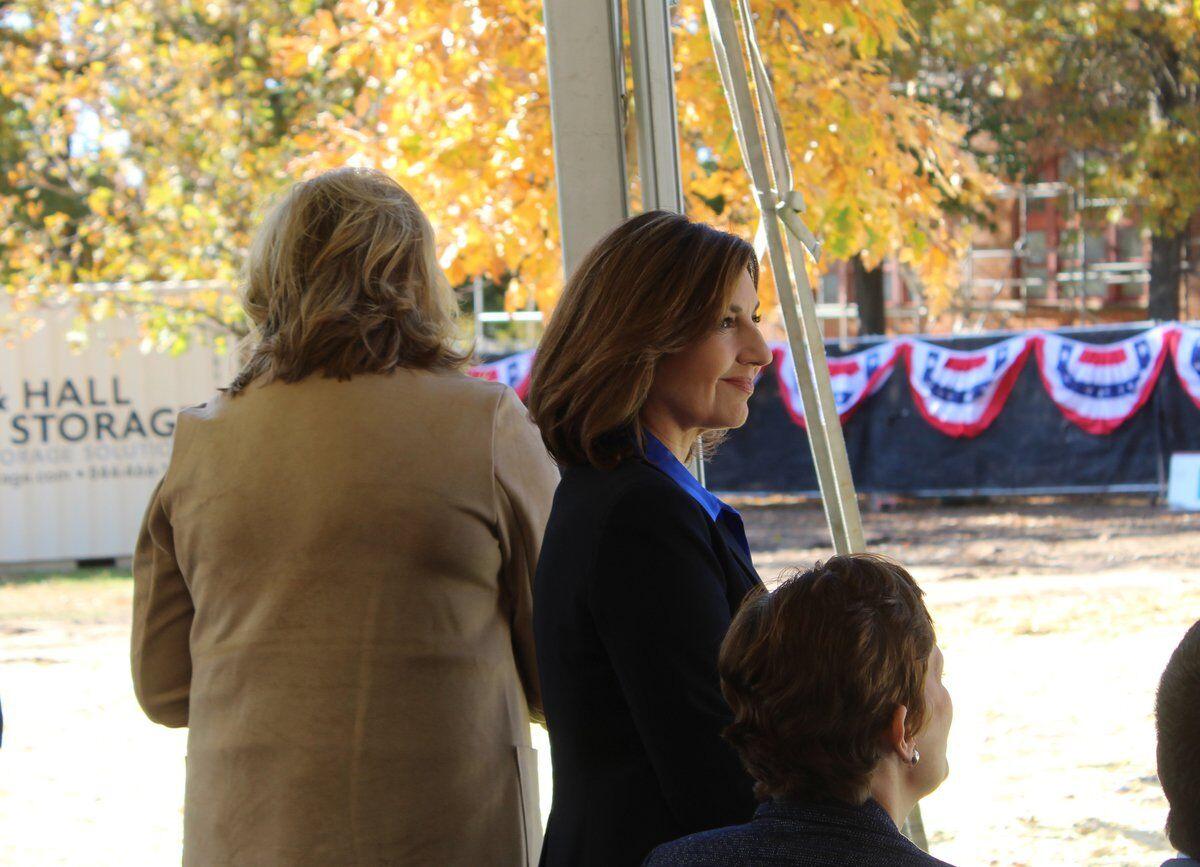 Oklahoma Superintendent of Public Instruction Joy Hofmeister was recognized at the Veterans Monument and Plaza Dedication on Nov. 11. 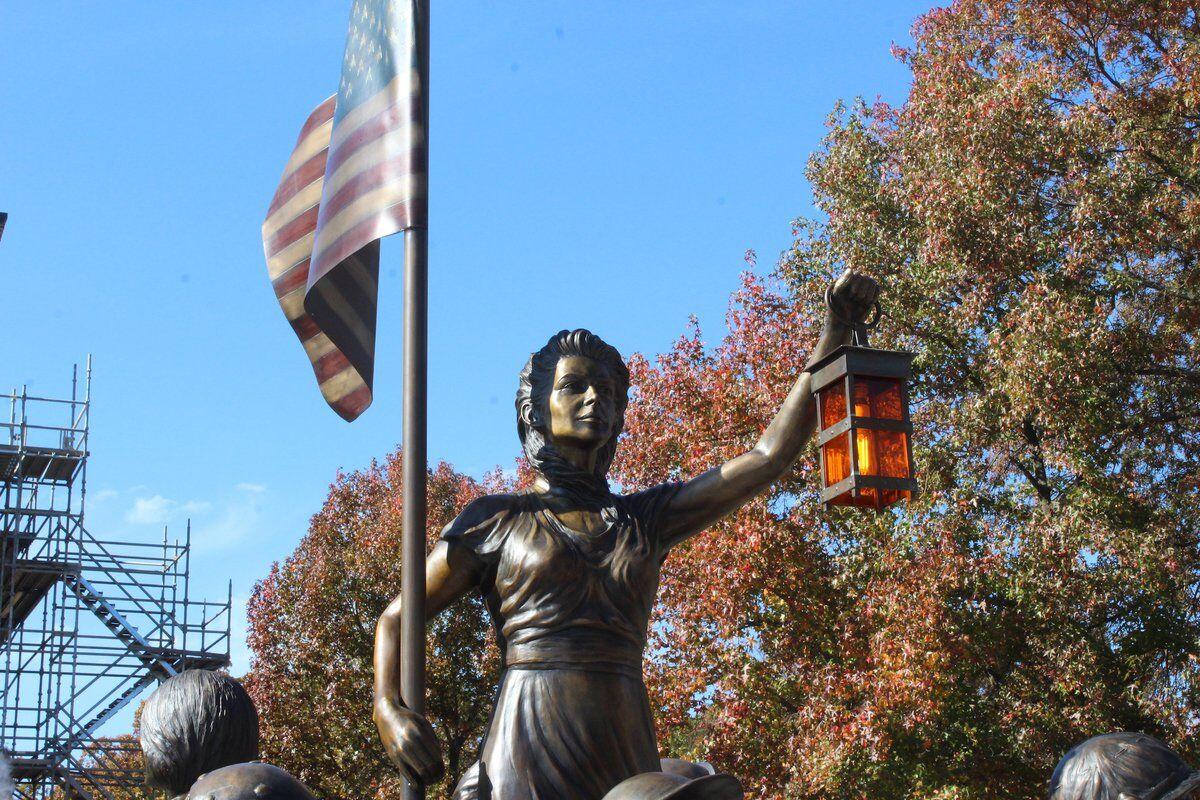 The Veterans Monument and Plaza was dedicated on Nov. 11. 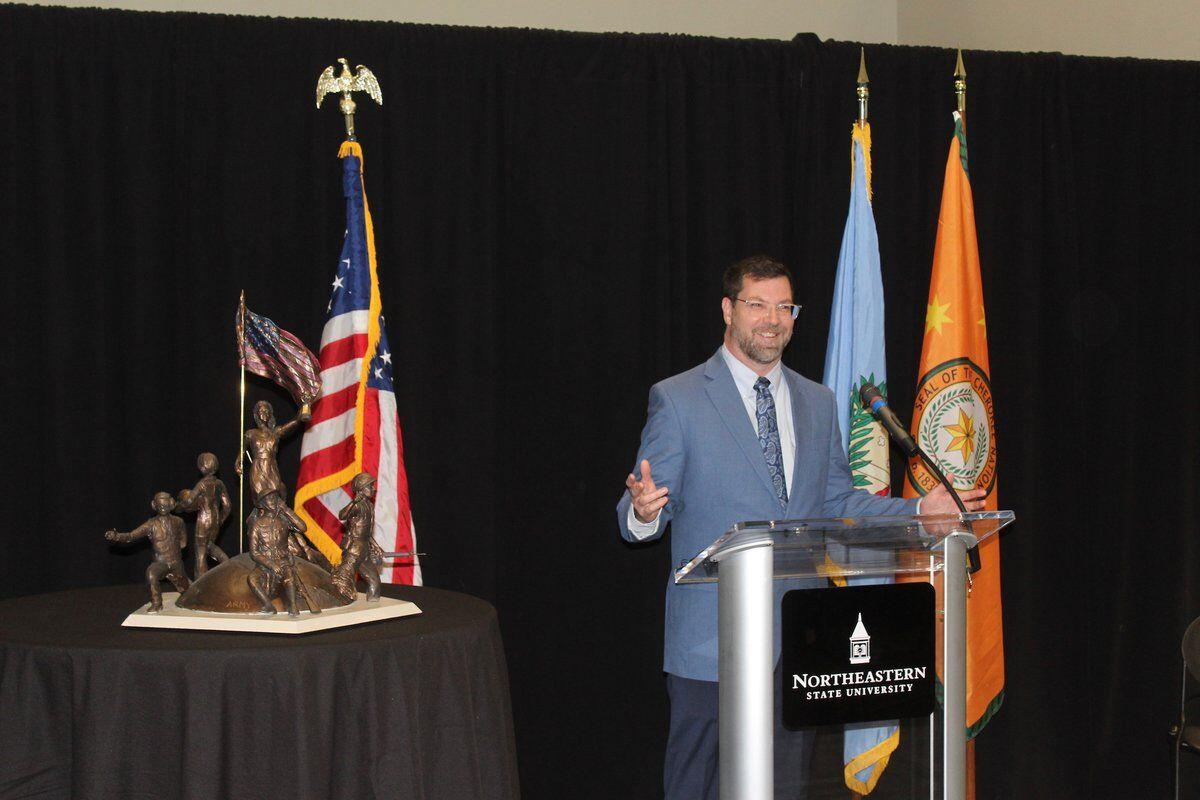 In a press conference, artist Joel Randell explained his inspiration to the new veterans statue at Northeastern State University. 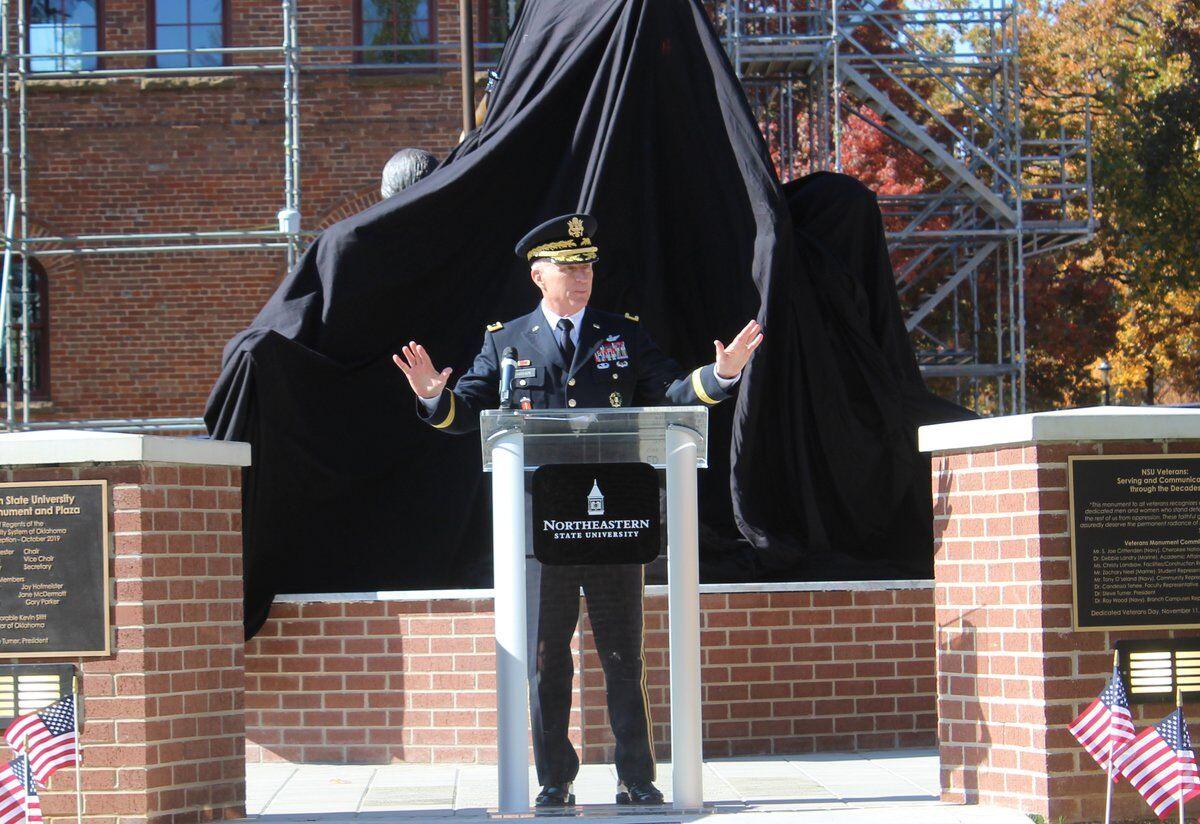 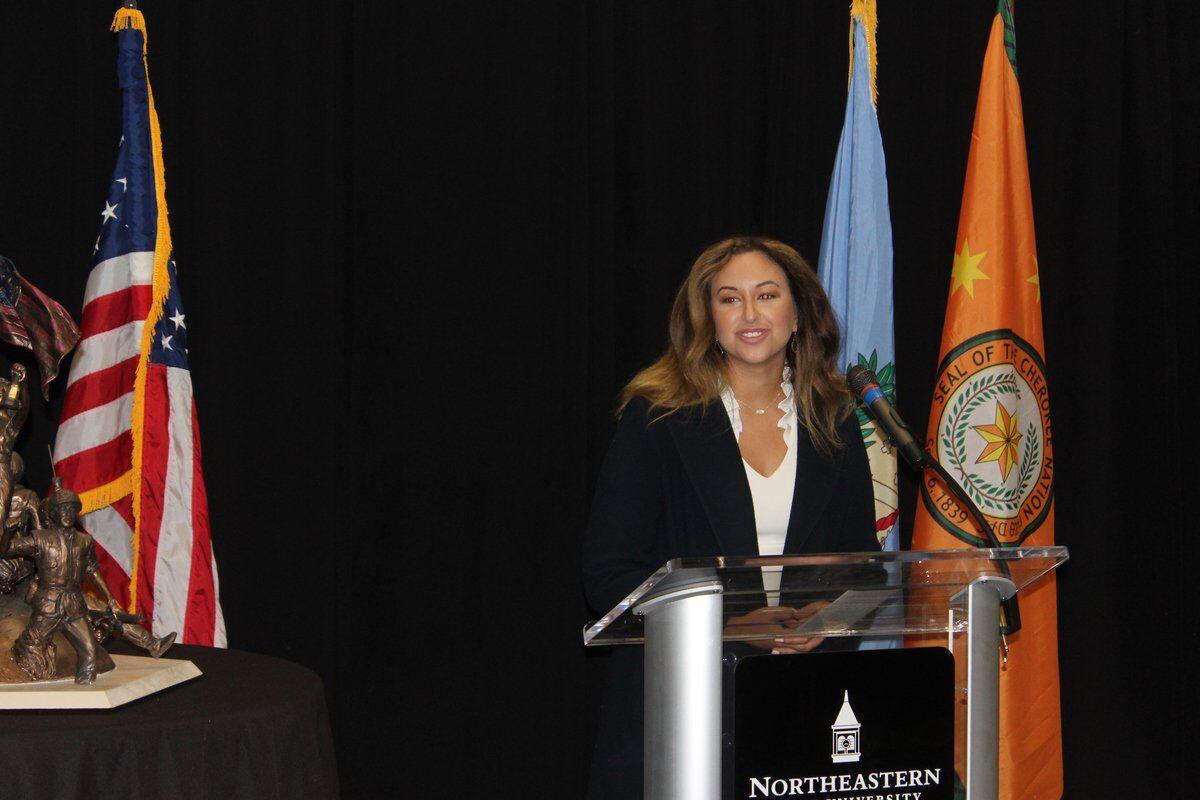 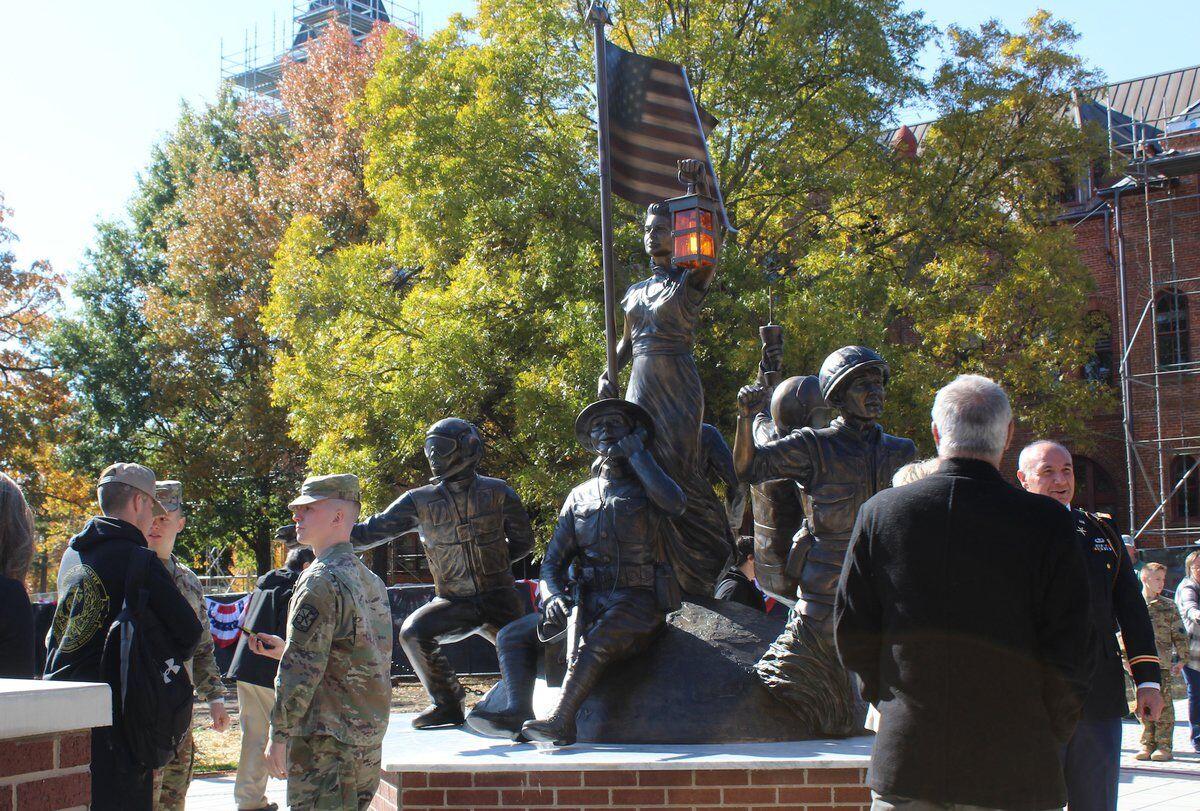 Area residents, ROTC, veterans, and members of the NSU community gathered around the Veterans Monument and Plaza Dedication on Nov. 11. 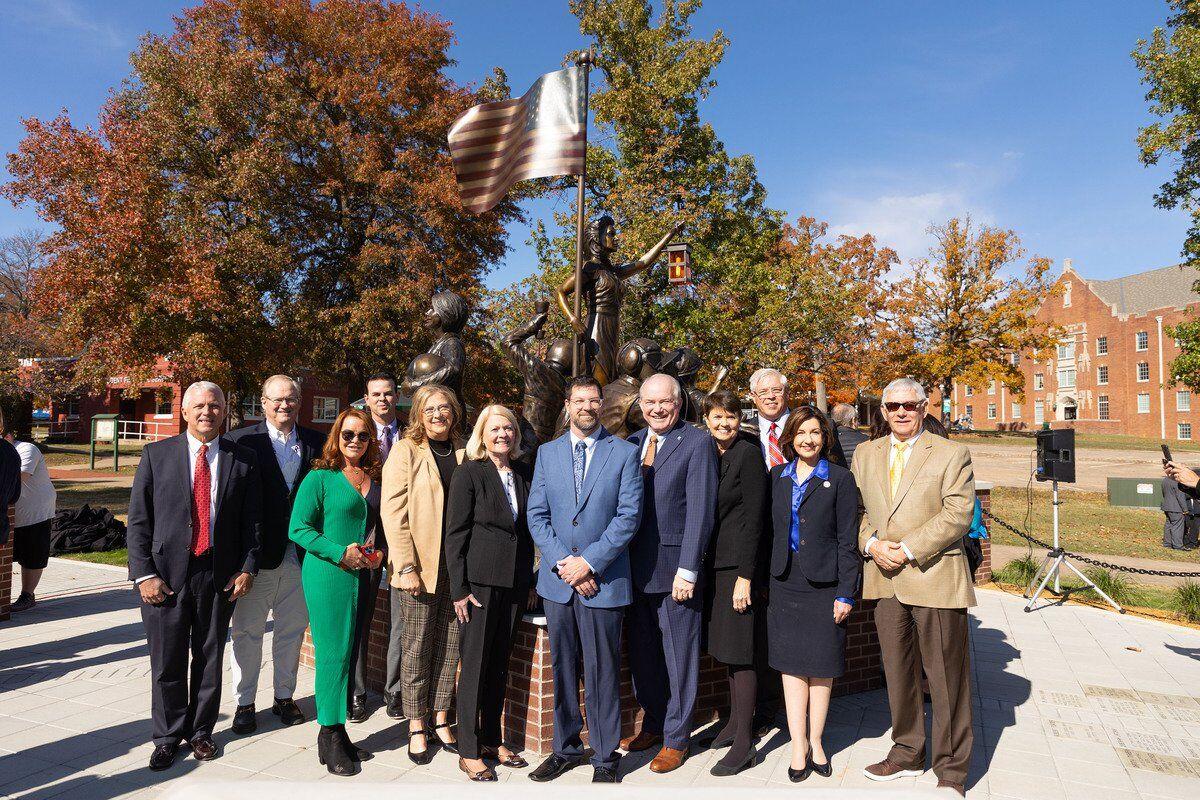 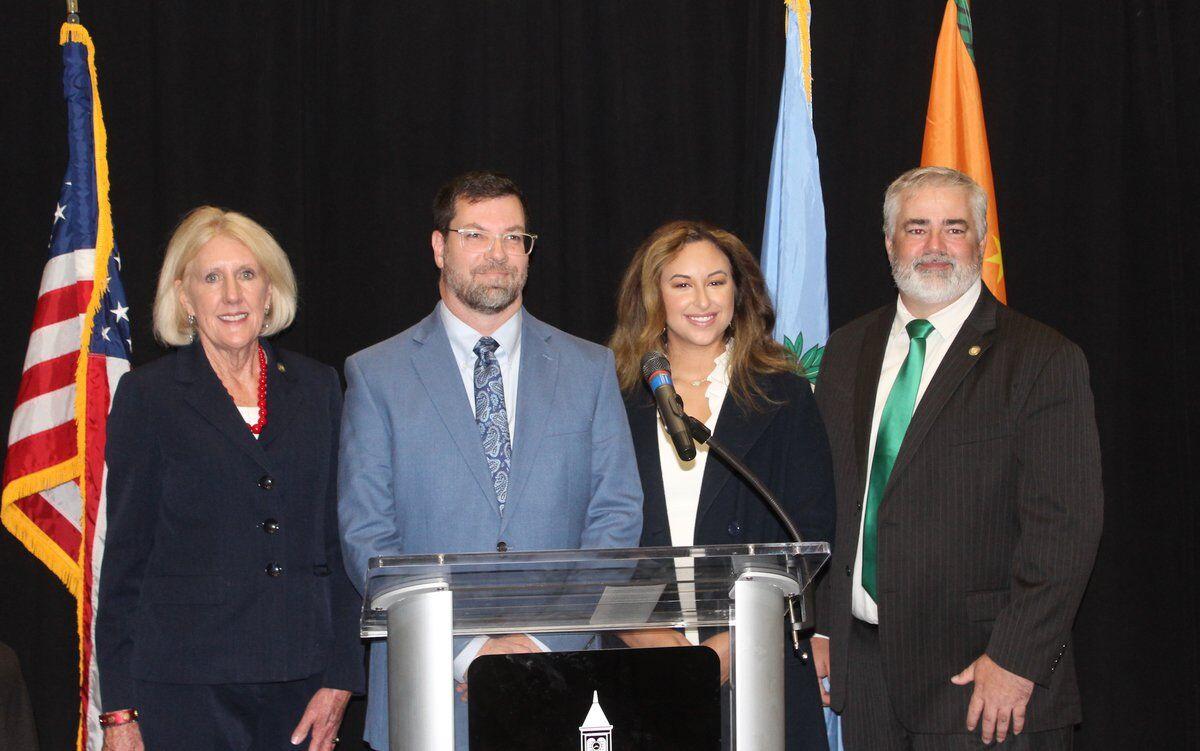 Debbie Landry, Joel Randell, Brooklyn Neff, and Dan Mabery addressed the press prior to the unveiling of the veterans statue at the Veterans Monument and Plaza Dedication at NSU on Nov. 11.

Oklahoma Superintendent of Public Instruction Joy Hofmeister was recognized at the Veterans Monument and Plaza Dedication on Nov. 11.

The Veterans Monument and Plaza was dedicated on Nov. 11.

In a press conference, artist Joel Randell explained his inspiration to the new veterans statue at Northeastern State University.

Area residents, ROTC, veterans, and members of the NSU community gathered around the Veterans Monument and Plaza Dedication on Nov. 11.

Debbie Landry, Joel Randell, Brooklyn Neff, and Dan Mabery addressed the press prior to the unveiling of the veterans statue at the Veterans Monument and Plaza Dedication at NSU on Nov. 11.

The work on “NSU Veterans: Serving and Communicating through the Decades,” began in 2018 when a committee of university administrators decided to send out a request for proposals to artists around the country. Eleven responded to the call, and three were interviewed. After he presented his proposal, Joel Randell’s was accepted.

“We discovered in our history how often our students and employees answered the call. It was humbling since NSU has been here, and even since it was the Cherokee Female Seminary, our citizens have answered the call. We wanted to find a way to honor them through this sculpture,” said Debbie Landry, NSU provost and vice president of Academic Affairs.

The sculpture sits on a pentagonal pedestal and features six vignettes representing five different branches of the military, and America at home. The Army is depicted by a Cherokee Code Talker from World War I, who is sitting and providing cryptic communication on the front lines of battle.

“We know that Cherokee has a prominent place here in Tahlequah and at NSU. What they did in World War I was an incredible thing that hadn’t been done,” said Randell. “The rest of us know about World War II Code Talkers, but it was the Cherokee and Choctaw that led that effort initially.”

The Navy is represented by a catapult officer better known as a “shooter,” who is signaling when a pilot should take off on a Navy boat.

The U.S. Marine is a soldier from the Vietnam War who is wading through a flooded rice patty and using his hand to communicate instructions to his fellow soldiers.

The Air Force is depicted by a helmeted modern-day female officer who successfully completed another mission.

“Incidentally, she would be the highest-ranking person in this composition. She is stepping off the world stage having finished a successful flight, satisfaction of a job well done,” said Randell.

The Coast Guard is represented by a modern-day U.S. Coast Guard rescue stretching his arms from a helicopter cable in a heroic effort to save someone from peril in the ocean.

In the middle stands a woman who represents the home front or the National Guard. She is holding a lantern and an American flag.

“[The] lady on top who is holding a lantern, is effectively shining the light home for those who are scattered abroad. She is standing on a representation. I call it a semi-globe representation of the Earth,” Randell said.

With her right foot, the woman is "standing" on Tahlequah so those who see it can remember where home is.

The artist titled the sculpture, “Serving and Communicating through the Decades,” because each figure is using his or her body in some way to communicate, whether it is a radio, a light, or an arm. The lantern is equipped with a light feature that will emit an amber glow during nighttime hours.

“That’s something I’ve never done in a sculpture before. And quite frankly, I don’t know of too many sculptures that go to that length to have an internal lighting system,” said Randell “It reminds you of a warm fire, and that’s what our service men and women think of, warm thoughts of being back at home.”

On top of the flag, the artist also placed a triangular logo that represents the Space Force; it was added toward the end of the project.

“I knew that we needed a topper for our flag. Right up here. I looked at the logo on Space Force, and it’s a triangle shape in front of a globe. I think it makes sense at the top. I imagine a communication satellite,” Randall said.

Brooklyn Neff, president of the Northeastern Student Government Association, gave opening remarks at the unveiling, as well as the preceding press conference.

“As a student, it’s an honor to be a part of a campus dedicated to serving its students who are actively serving the military or have served,” she said.

“I can’t think of a better place for it to be adjacent to historic Seminary Hall. It’s a wonderful reminder as it looks to the East,” said Turner.

NSU has been recognized as a military-friendly campus, said Connie Reilly, RUSO Board of Regents chair.

"It is also a veterans employer champion, and it is a proud part of the U.S. Department of Defense’s yellow ribbon campaign,” she said.

Dan Mabery, NSU vice president for University Relations, noted that this statue is important to NSU because the school sits on Cherokee land and enrolls a disproportionately high number of Native American students, and Native Americans enlist in the U.S. military higher than the national average.