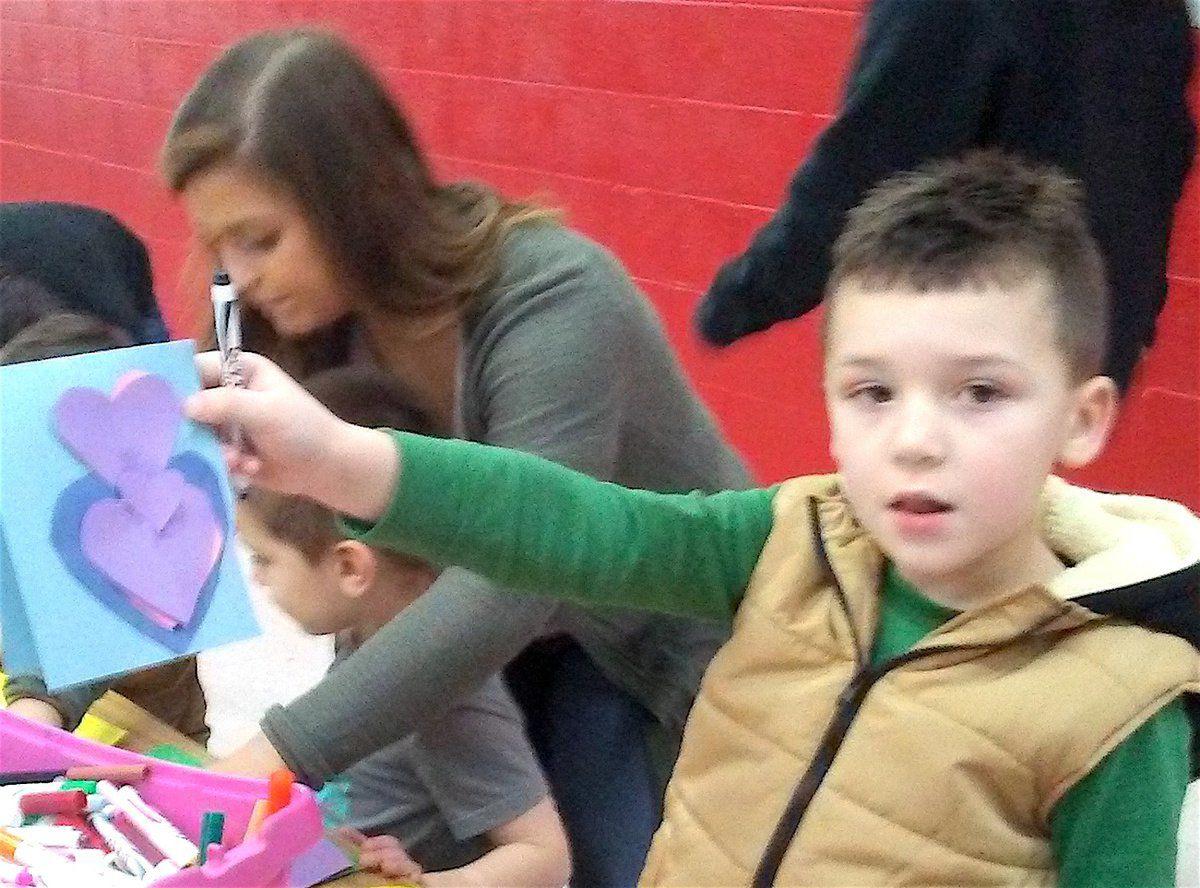 Keys Elementary School student Tugg Looney, 5, shows off a Valentine's Day card he made for a veteran. 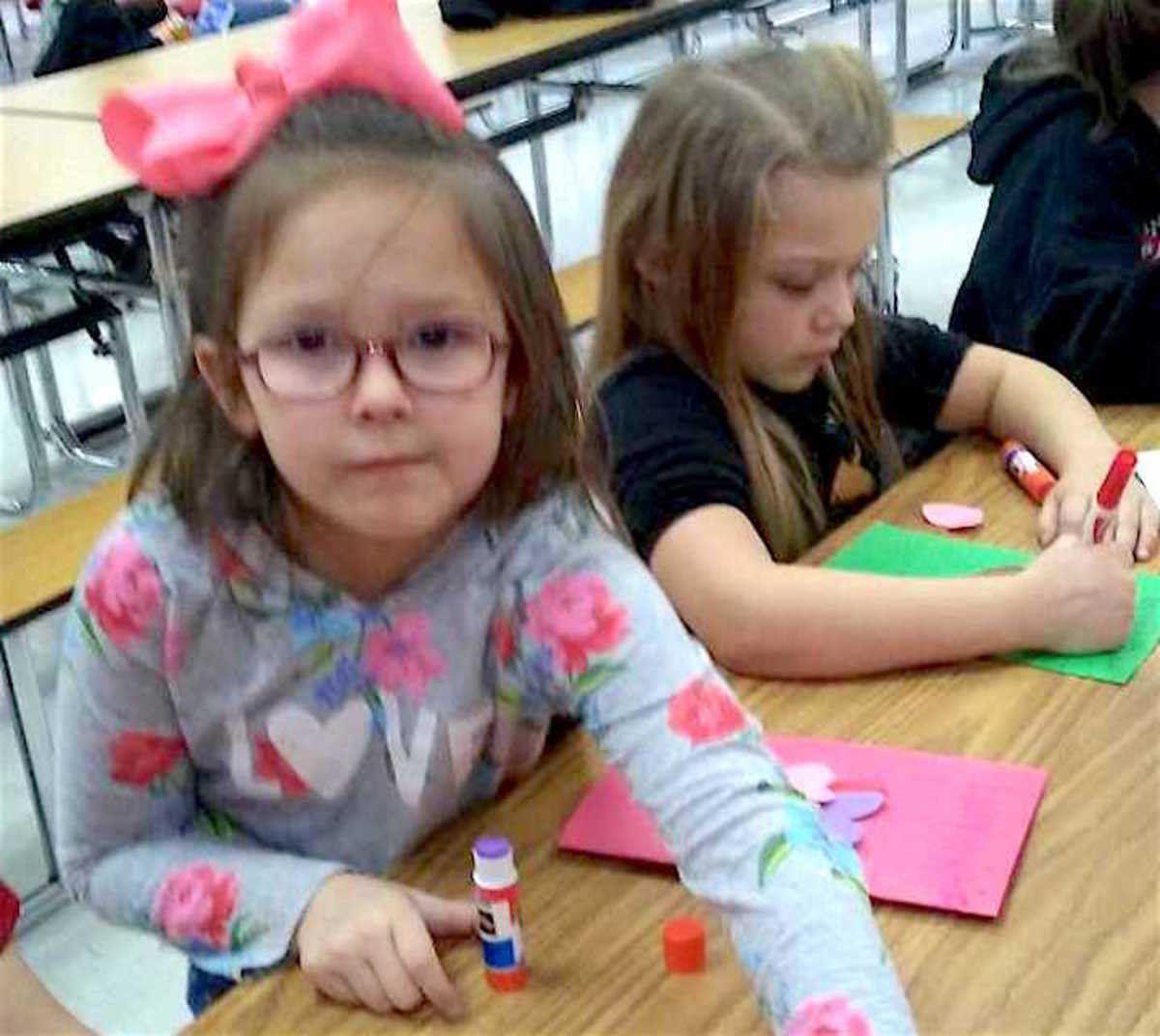 Keys Elementary School student Tugg Looney, 5, shows off a Valentine's Day card he made for a veteran.

Area school children, organizations, and Cherokee Nation citizens have been busy crafting cards to be distributed as part of the tribe's annual Valentines for Vets program and other service drives.

This will be the 12th year for the Cherokee Nation Valentines for Vets, which was started by Rogan Noble, a Marine Corps veteran. The tribe asks the community to turn in homemade cards, which will be delivered to medical facilities, nursing homes, and veterans centers. Some CN departments or groups, such as the Youth Council, get together and make cards.

Secretary of Veterans Affairs Joe Crittenden, a Navy veteran, said many people who are elderly or not feeling well, and are in nursing homes and hospitals, may not get many visitors or letters.

"They are sometimes lonely, sometimes depressed, maybe feeling like no one cares," said Crittenden. "I like to shake their hand, look them in the eye and say, 'Thank for your service' or 'Thank you for your sacrifice,' and ask if they're having a good day."

He said many of the handmade cards he has seen say things such as "Thank you," "You are a hero," or "Thank you for keeping us safe."

"It makes it personal. It can bring a smile to their faces, make them think of their family or kids and smile," said Crittenden. "If we can brighten their day for a little while, it's a blessing."

The cards, of which there may be over 4,000, are not just delivered to Cherokee or native veterans, but to all who served.

"It doesn't matter if they're Cherokee. Anybody who wore the uniform and got an honorable discharge, we're all the same; we're all from one family," said Crittenden. "Thank goodness we were able to come home."

Crittenden and other Cherokee Nation administrators and dignitaries will visit the Jack C. Montgomery VA Medical Center in Muskogee on Feb. 10. He said they will visit all of the private rooms they can, and leave additional valentines with the facility's staff to hand out.

"A lot of times we've gone to the hospital, we'll take Miss Cherokee or the Youth Choir, with girls wearing tear dresses and some of the men in nice ribbon shirts. It's a colorful group, an upbeat group," said Crittenden.

He said talking with veterans can help them process some of what they have been through or give them an opportunity to share stories they have told before.

"I get to ask about where they served, and if they were in the Navy like I was, what ships they were on. I like to share stories with them," said Crittenden. "The healing process of those in war takes a long time. Something about telling stories helps with that healing process."

Outside groups also contribute to sending cards to veterans.

Angela Lee leads Girl Scout Troop 251, and they have participated in Valentines for Vets for the past few years.

"The girls love making the valentines and knowing they are brightening the day of someone else and helping their community," said Lee.

Making cards was turned into a civics and art lesson last week at the Keys Elementary School Boys & Girls Club.

"Blue Star Mother and retired Keys teacher Susie Eden reached out to the school and will be sending the valentines in soldiers' boxes and to veterans at the VA hospital in Muskogee," said Renee Fite, Keys B&GC art teacher. "I know some of the teachers are also having students make cards in the classroom."

Fite said she started each card-making session by asking the students what a veteran is.

"While the older ones had an idea they're soldiers, most elementary- and middle-age students didn't," she said. "After a short lesson about what a veteran is and what they do, several of the smaller children said, 'Oh, my daddy did that,' or 'My grandpa and uncle were soldiers.' One little boy said, 'My mom wears an Army uniform.'"

The students in prekindergarten through eighth grade created unique cards featuring American flags, tanks, and heartfelt messages such as "I love you," "God bless America," and "Happy Valentine's Day."

Due to the 21st Century Grant, the materials - such as construction paper, pom poms, sequins, and markers - were supplied to the children.

Those who had a parent or family member in the military also made one to take home.

"Along with creating art, it provided an opportunity to learn about patriotism, freedom, and service to our country, the branches of military and, for some children, a reason to feel proud of a parent or relative or family friend," said Fite.

The deadline to submit cards to Valentines for Vets is Monday, Feb. 10. They may be dropped off at the box inside the Cherokee Nation Veterans Center, 17725 S. Muskogee Ave. Call 918-772-4166 for more information.