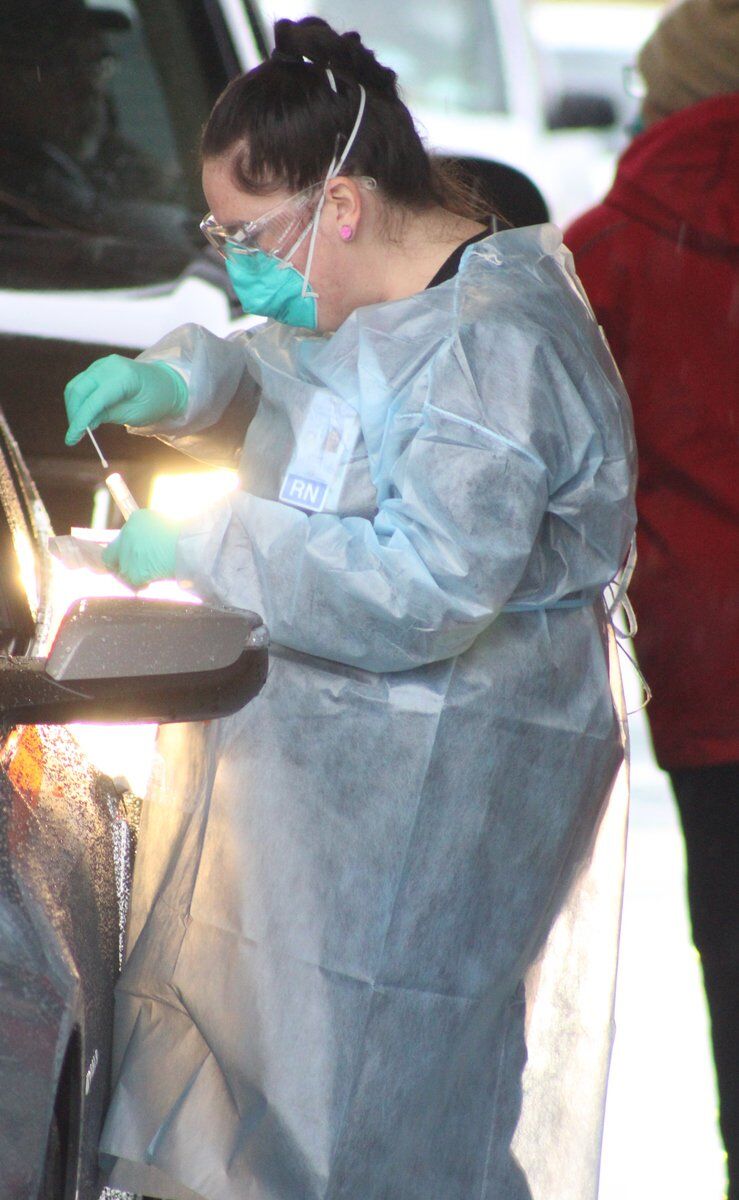 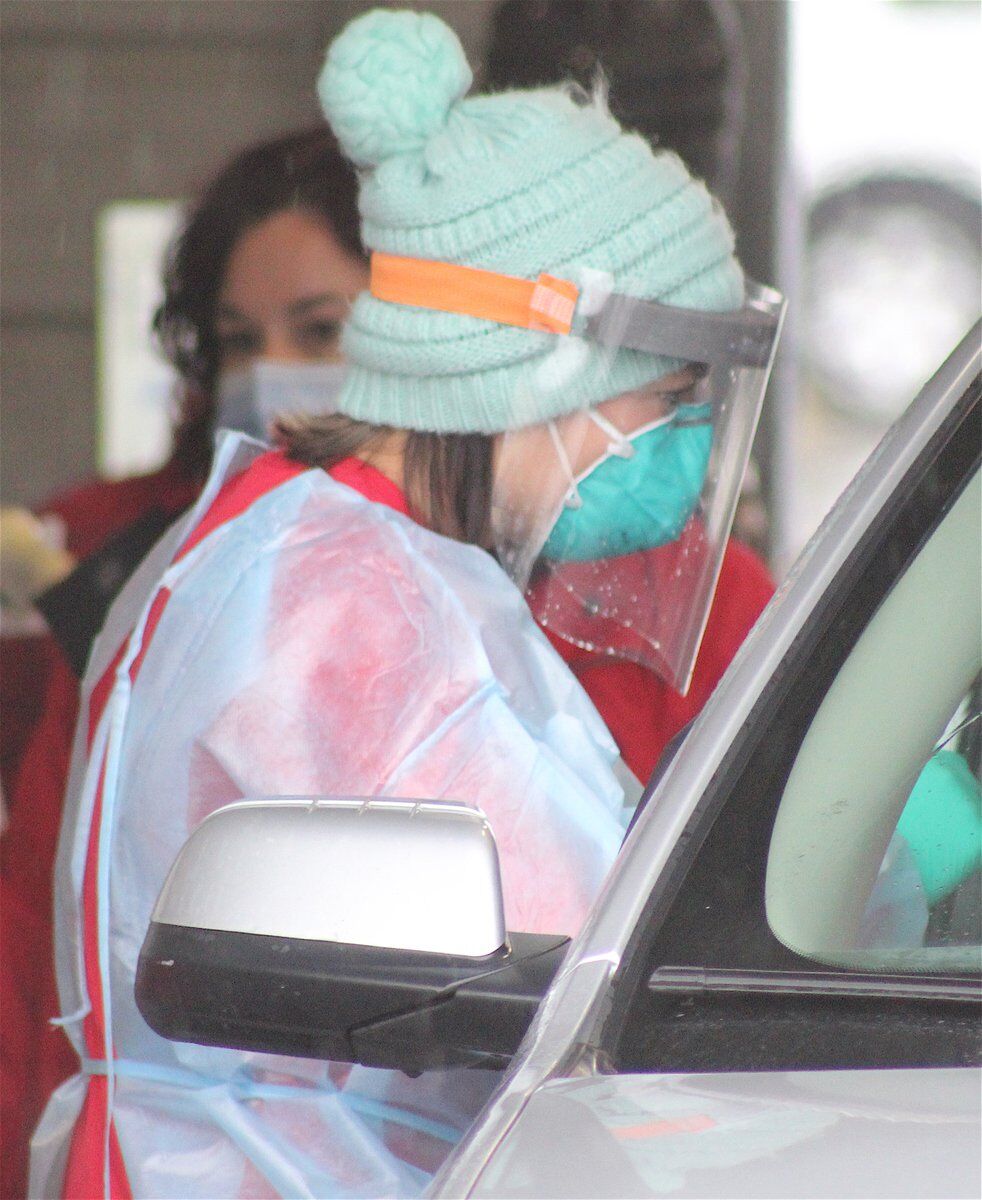 A Cherokee Nation Health Services employee speaks with someone looking to get a COVID-19 test at the drive thru at W.W. Hastings Hospital.

A Cherokee Nation Health Services employee speaks with someone looking to get a COVID-19 test at the drive thru at W.W. Hastings Hospital.

Cherokee Nation Health Services has received national attention for its response to the COVID-19 pandemic, and while officials are proud of the work done so far, they know there are more hurdles to clear.

The Cherokee Nation is the largest tribe in the country, with more than 380,000 citizens worldwide and more than 141,000 citizens within the reservation. As of Wednesday, Dec. 2, CNHS has reported 5,956 confirmed cases of COVID-19. The system that has been growing in recent years, which has likely helped the tribe’s preparation for the novel virus.

“I think the fact that we invested $300 million over the last 10 years for state-of-the-art health care facilities has made our job easier,” said Principal Chief Chuck Hoskin Jr. “We have these facilities that are really suited for a safe environment, and the direct care people get, I think, is the best around, in terms of COVID.”

Health officials and emergency management first met to discuss the virus in January, when it was first identified. Since then, COVID-19 has grown into a much larger problem than many anticipated, and so did the Cherokee Nation task force, as around 12 departments are involved in daily meetings. The tribal reservation's location, in the middle of the country, likely helped it tamp down numbers of positive cases, too.

“I don’t know that anybody was absolutely prepared,” said Dr. Stephen Jones, executive director of CNHS. “I think the Cherokee Nation was proactive – maybe a little earlier than most – just seeing what was happening on the coast. We saw this thing start on the east and west coasts and move to the center of the United States. So we had a little bit of a forewarning.”

The tribe has been working to keep food on Cherokee tables, distributing more than 90,000 meals for food security purposes in recent months. CN has also tried to keeps its employees home, if possible. Sequoyah Schools was one of the only institutions in the area to go fully virtual at the beginning of the fall semester, although it has since allowed students to venture onto campus once a week, and its protocols for those entering tribal properties are among the strictest in the county.

“We’ve been keeping very close statistics on our workforce, and we have done a fantastic job at protecting our workforce,” said Jones. “We had a mask mandate we put in very early. We allowed for people who work in the office to social distance a little better. We’ve done all the things we could do proactively to be ready. As a result, we have been able to protect our workforce in a very effective manner. I don’t know of any exposures at work.”

In March, the tribe shut down its casinos, its biggest source of revenue. In the meantime, Cherokee Nation Businesses continued to pay those employees. So the tribe’s willingness to keep people employed, but safe, came with a significant blow to its future financial stability, said Hoskin.

“We will regain our footing, but if you hemorrhage $30 million to $40 million month as you keep all the casinos shut down and everyone paid, that does catch up with you eventually,” said Hoskin.

While the tribe has done well to curb the virus, only so much can be done. Across the country, hospitals are seeing record highs, and CNHS is no stranger to that phenomenon.

“I’m proud of [what’s been done], but candidly, we are feeling some stresses right now in terms of hospital utilization,” said Hoskin. “We’re susceptible to the same limits a lot of other health systems are susceptible to.”

Numbers of COVID-19 have increased across the country in recent weeks. W.W. Hastings Hospital has been working at capacity for some time, with all ICU beds full. In some cases, the tribe has had to send patients to an out-of-state ICU. And that could become worse if cases continue to rise.

“So far, we haven’t run into a situation where we couldn’t find a bed for a patient, but we anticipate that may be the case in the near future,” said Jones. “If it is, we have a surge plan in place that allows us to expand our ICU, expand some of our beds into other areas of our hospital.”

The tribe has tried to remain consistent with its public health messaging. It has implored people to wear masks and socially distance. While it recommended that its citizens and the public avoid large family gatherings for Thanksgiving, that warning could not reach all of the country’s 330 million people, and likely not all of its 380,000 Cherokee citizens.

Now, Jones and Hoskin are expecting a surge on top of a surge in positive cases.

“The disappointing thing was that science-based message to not gather with extended family over Thanksgiving, as difficult as that is, was undercut by leaders at several different levels,” said Hoskin. “That includes the governor of the state of Oklahoma, it includes the president of the United States, it includes members of Congress, and it’s just not helpful. I believe what the scientists tell me, which is if you gather maskless and eat in a group outside of your immediate family, you are going to expose yourself to danger, and you’re going to expose your community to danger.”

The number of COVID-19 deaths in the U.S. has reached over 273,000, while more than 13 million positive cases have been reported. This election year has likely helped create the contentious atmosphere surrounding the pandemic. Guidelines from the Centers for Disease Control and Prevention have consistently been argued over, and thus many Americans have not adhered to precautions.

Jones said CNHS feels the staff are safer when they are at work, because all employees strictly follow CDC guidelines, and are perhaps a little more relaxed when at home. Based on that information, Jones believes the U.S. pandemic landscape would look differently had everyone in the past eight months followed protocols.

“Even though we go out and give talks, recommending to schools, recommending to county governments, and recommending to state of Oklahoma that they should be doing mask mandates, the lack of that has shown over time that we probably would have been a little bit safer with the mask,” said Jones. “It became a political thing instead of a public safety thing.”

Americans are becoming fatigued by the virus, though. Reports of a vaccine being developed have given people hope that the end of the pandemic may be near. However, the number of those doses available to the public is miniscule, and Jones doesn’t think the average person will be able to get one until perhaps August or September of 2021.

“So we’re going to be dealing with this for another 10 or 11 months,” he said. “I think the biggest thing we need to do right now, in the media and as a health care system, is have people stay diligent. Wear your masks, wash your hands, watch your distance, and really consider when you have to gather up, what the consequences are of gathering together.”