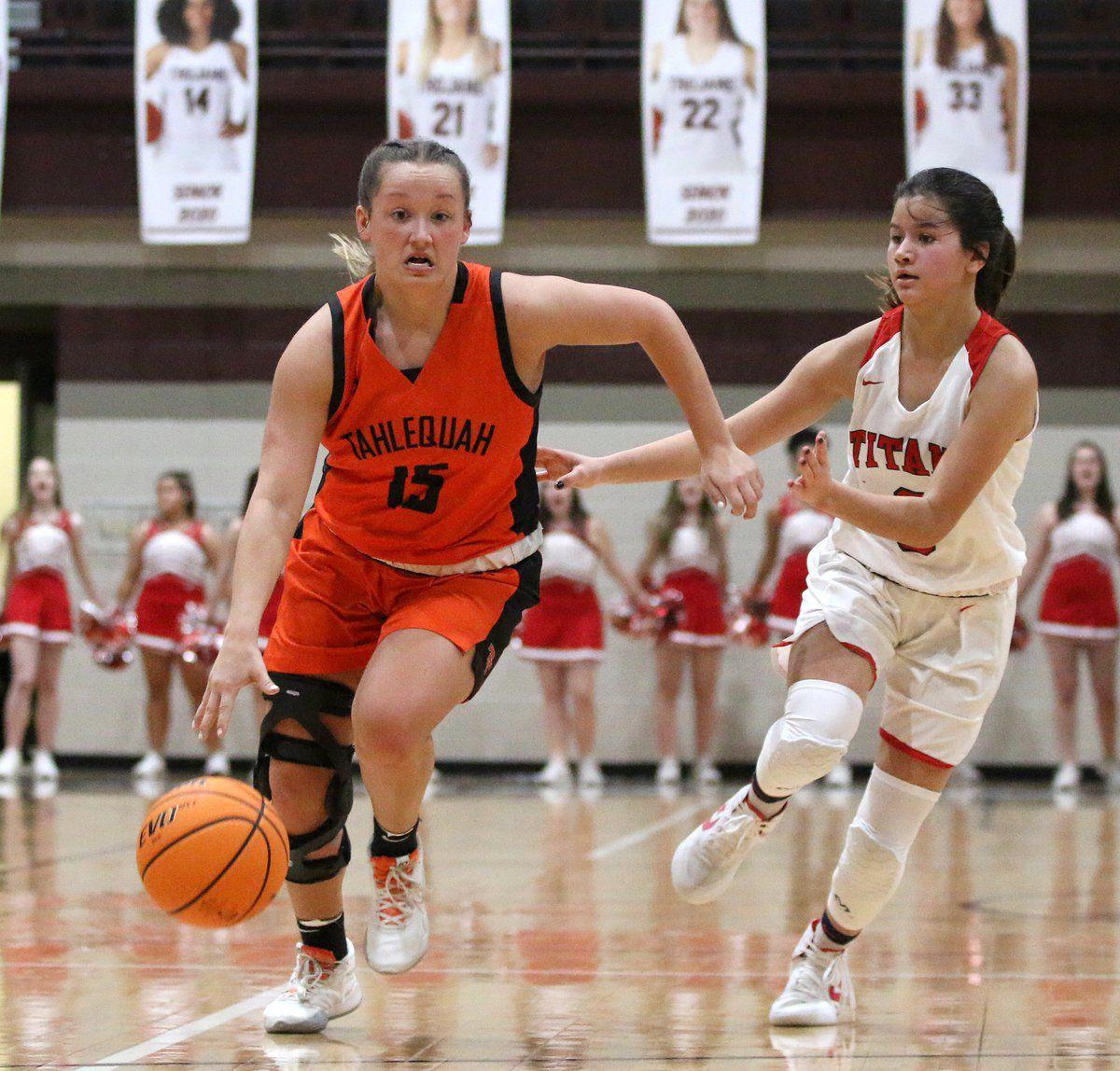 Tahlequah junior guard Kacey Fishinghawk scored 12 points on four 3-pointers in the Lady Tigers' 60-39 win over Coweta on Jan. 7 at the TMAC. 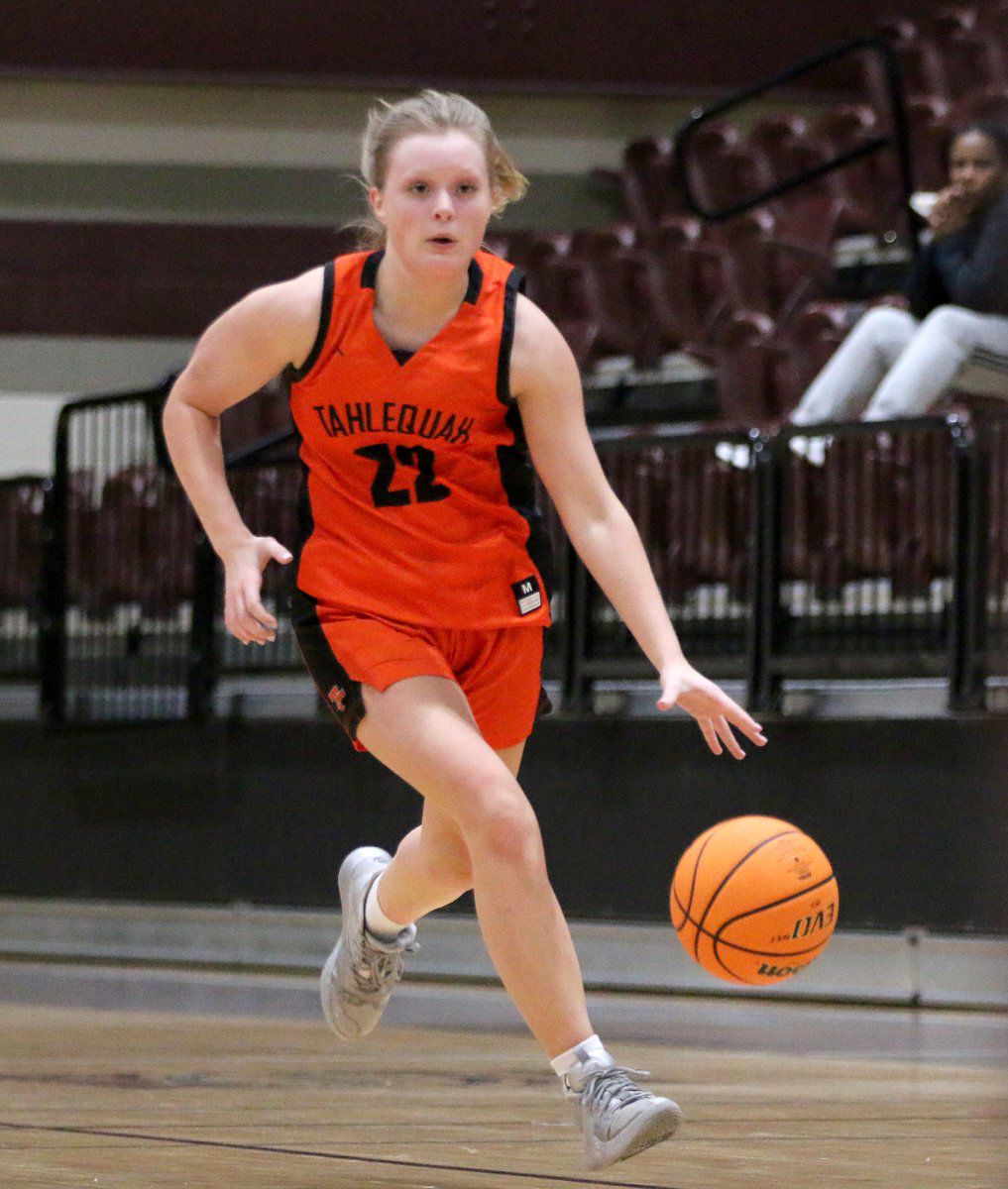 Tahlequah junior guard Kacey Fishinghawk scored 12 points on four 3-pointers in the Lady Tigers' 60-39 win over Coweta on Jan. 7 at the TMAC.

From a fourth straight regional championship to an area title and a state tournament berth, the Tahlequah Lady Tigers’ basketball program continued to shine in 2019-20.

There were some big moments in a season that was shortened due to the COVID-19 pandemic.

The Lady Tigers, under head coach David Qualls, strung together a six-game win streak, a pair of five-game streaks, finished ranked fifth in Class 5A, and advanced to their third state tournament in the past four years.

Below is a look back on the Lady Tigers’ season.

This is the second part of a series that will feature Tahlequah’s best moments in sports over the 2019-20 school year.

In a 47-34 win over Sallisaw, Kloe Bowin and Faith Springwater both finished in double figures as the Lady Tigers led from start to finish. Bowin had a team-high 14 points, while Springwater followed with 12. Tahlequah buried seven 3-pointers as a team, three of those coming from Springwater.

The Lady Tigers stayed in a groove in Saturday’s consolation final, upending the Lady Roughers, 62-35, behind a game-high 16 points from Springwater. Bowin followed with 12 points, and both Lydia McAlvain and Kacey Fishinghawk closed with 11. THS knocked down nine 3s — three from Fishinghawk and two apiece from McAlvain and Springwater.

Springwater, averaging 14.6 points over the three days and converting on nine 3-pointers, was named to the all-tournament team.

The two wins to close the tournament were the start of a five-game winning streak.

The win was a defining moment for Tahlequah, who improved to 5-2 overall and moved to 3-1 in the Metro Lakes Conference.

“This is probably our biggest win of the year,” said Tahlequah head coach David Qualls. “Just the way we played. We played really clean, did a really good job on defense, stuck to the game plan, and offensively, I think we showed potential of what we can be when we’re clicking on all cylinders.”

The Lady Tigers canned 10 3-pointers and had three players close in double figures. Faith Springwater led with a game-high 16 points, Kloe Bowin finished with 14, and Kacey Fishinghawk had what was a season-high 12 points at the time.

Tahlequah made five of its 3s in the opening quarter, three of those from Fishinghawk. Fishinghawk had four treys in the contest, while Kynli Heist, Springwater and Lydia McAlvain had two apiece.

Springwater had 13 of her points in the final 16 minutes. Her 3-pointer at the 4:45 mark of the fourth quarter gave the Lady Tigers their largest lead of 53-30.

Kynli Heist and Lydia McAlvain both scored in double figures to help improve Tahlequah to 6-2 on the season.

Heist finished with a game-high 11 points and went 6 for 7 from the free throw line, while McAlvain knocked down two of Tahlequah’s five 3-pointers and closed with 10 points.

Tahlequah bombards Collinsville: The seventh-ranked Lady Tigers scored at will and demolished Collinsville 85-37 on Jan. 14 at the TMAC.

Tahlequah buried 11 3-pointers — the most in the David Qualls’ era — and the 85 points were a season high. The win was the second of what would become a season-best six-game winning streak.

Kacey Fishinghawk finished with a game-high 19 points, 15 of those on 3-pointers, and sparked Tahlequah in the opening eight minutes as it jumped out to a 22-3 lead. Fishinghawk had nine of her points in the opening quarter on three 3s.

The Lady Tigers improved to 8-3 overall and 4-1 in the Metro Lakes Conference.

“I think offensively right now we’re in a good spot,” THS head coach David Qualls said afterwards. “We’ve talked about shooting the ball well. We had 11 3s again tonight, had four girls in double figures. Offensively, right now we’re playing pretty well. When we take care of the ball we can be tough to beat. I feel that’s where this team’s at right now. They’re doing a great job of executing on both ends of the floor.”

Lady Tigers snap three-game losing streak with big win at Coweta: Perhaps the most significant win of the season, No. 6 Tahlequah went into enemy territory and came away with a 49-45 victory over ninth-ranked Coweta.

The win put the Lady Tigers at 13-6 overall and 7-3 in the Metro Lakes Conference and ended Coweta’s six-game win streak. The win also finished a regular-season sweep of Coweta, who was considered the conference’s preseason favorite, and put Tahlequah in a favorable position to host a Class 5A Regional Tournament.

Tahlequah, who trailed just once in the contest, led by as many as 14 points after Kacey Fishinghawk knocked down a jumper in the opening minute of the fourth quarter.

Faith Springwater led all scorers with 18 points, and Lydia McAlvain followed with 13. Kloe Bowin added nine points, seven of those in the first half.

State bound: Tahlequah made its Class 5A Area Tournament Championship game look easy as it rolled to a 55-34 win over Carl Albert at Jenks High School on March 5 and secured a spot in the state tournament.

The Lady Tigers overcame a sluggish start and used a 14-0 run to take command and never looked back.

“It’s amazing,” Tahlequah head coach David Qualls said. “We talk about tradition doesn’t graduate, and the girls have really bought into that. Each team is different and we have to coach them different, but it’s just exciting to get back. It’s huge for our school, huge for our athletic program and our community, and we’re excited to play another week. Once you get to the state tournament anything can happen.”

“It’s great,” senior forward Kloe Bowin said. “Last year we barely missed the state tournament. We were supposed to win but we got a different path, so it feels great to go back and getting Coach K (assistant coach Charles Knifechief) back to the state tournament, which is what we said from the beginning, we wanted to get Coach K back.”

Lydia McAlvain produced career highs in points (18) and rebounds (10), while Bowin, Faith Springwater and Lily Couch each had eight points.

McAlvain carried the Lady Tigers in the third quarter as they scored 14 of the first 17 points to go up 42-19 at the 1:59 mark. McAlvain scored the first six points on a putback basket and four free throws, and both Couch and Bowin had baskets to highlight the surge and put the contest away.

It would be the final time Tahlequah stepped foot on a basketball court as the Oklahoma Secondary School Activities Association postponed the state tournaments on March 12 and later cancelled all sports activities for the remainder of the school year on March 26.