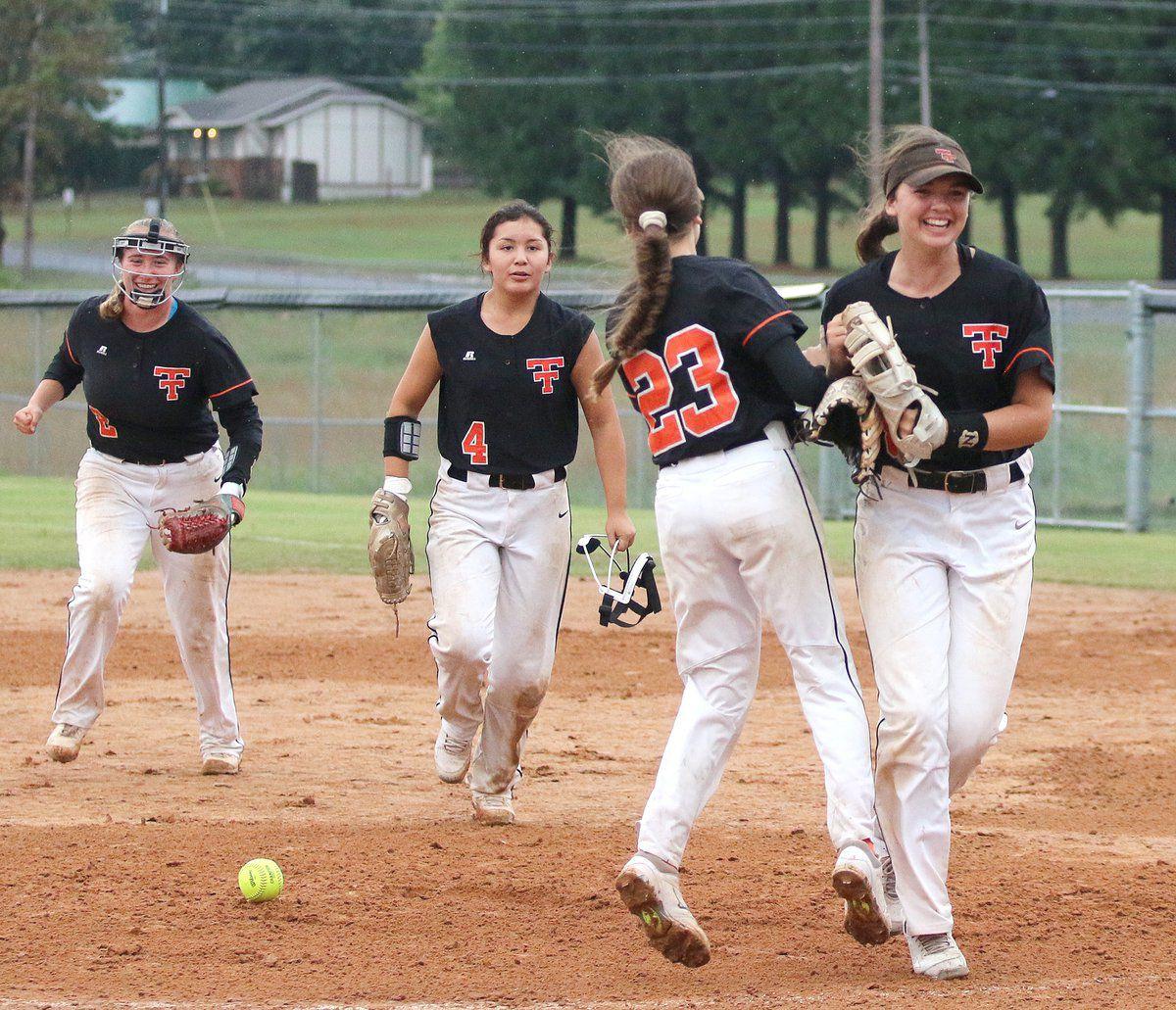 From left, Betty Danner, Mikah Vann, Lexi Hannah and Hailey Enlow celebrate after the final out against Claremore Thursday in Tahlequah. The Lady Tigers defeated the Lady Zebras, 6-0, in the Class 5A Tahlequah Regional Tournament championship game. 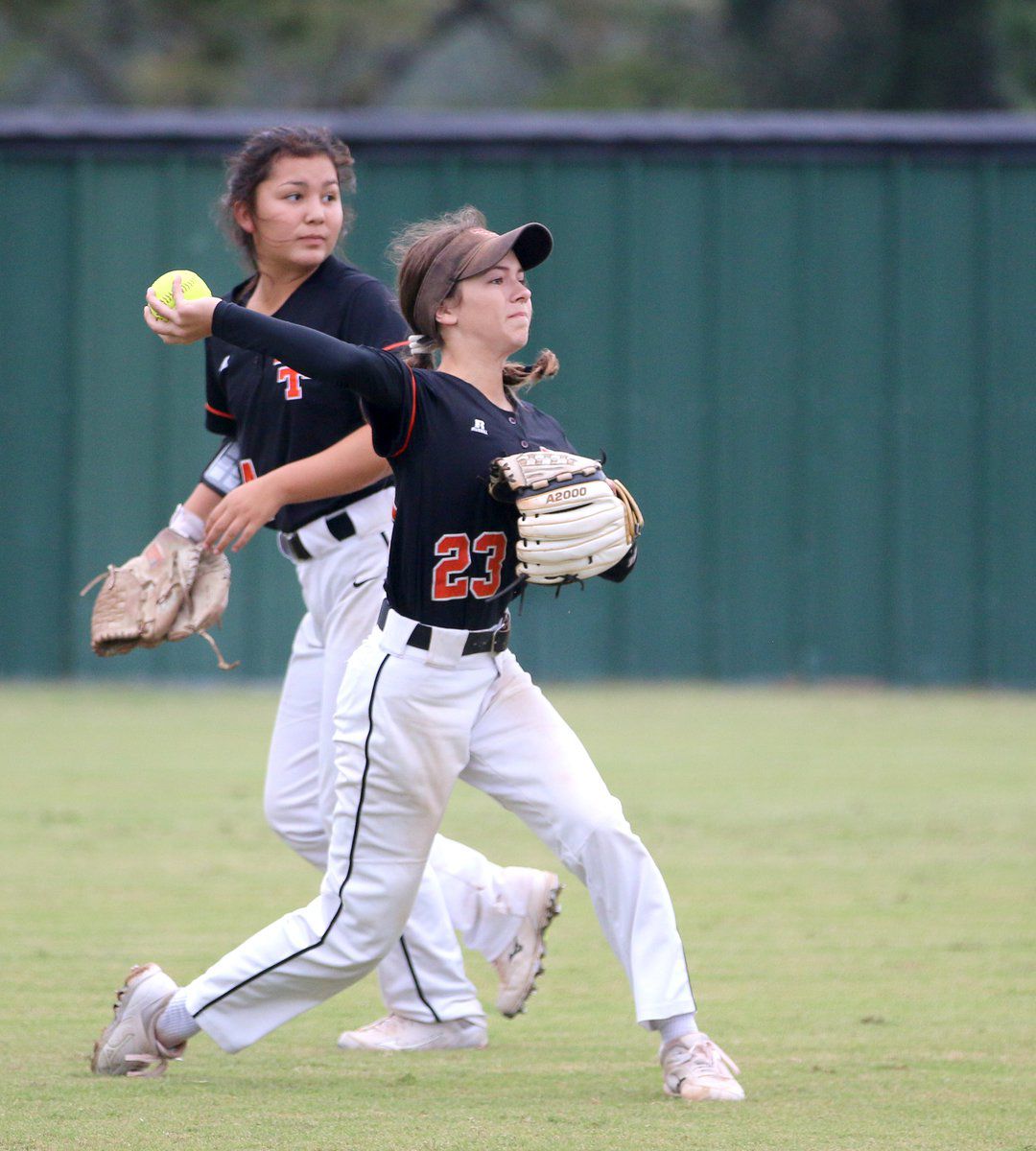 Tahlequah shortstop Lexi Hannah throws back to the infield after a Claremore single Thursday in Tahlequah. The Lady Tigers defeated the Lady Zebras, 6-0, to earn their third consecutive trip to the Class 5A State Tournament.

From left, Betty Danner, Mikah Vann, Lexi Hannah and Hailey Enlow celebrate after the final out against Claremore Thursday in Tahlequah. The Lady Tigers defeated the Lady Zebras, 6-0, in the Class 5A Tahlequah Regional Tournament championship game.

Tahlequah shortstop Lexi Hannah throws back to the infield after a Claremore single Thursday in Tahlequah. The Lady Tigers defeated the Lady Zebras, 6-0, to earn their third consecutive trip to the Class 5A State Tournament.

Chris Ray wasn’t hesitant about putting a freshman in the pitcher’s circle in the most important game of the season Thursday.

The Tahlequah head coach went with Mikah Vann in the Class 5A Tahlequah Regional Tournament if-necessary championship game with everything on the line.

Vann delivered by tossing a complete-game shutout, helping lift the Lady Tigers to a 6-0 win over Claremore and a third straight state tournament berth.

“I said before this thing started it was good to have two pitchers, and I think with her coming from the left side and being able to change speeds, she was able to keep hitters off balance,” said an emotional Ray afterwards. “We made plays behind her. We started getting her some meaningful innings a couple of weeks ago and she came through in a big way today.”

Tahlequah was forced into the deciding game after the Lady Zebras rallied for a 4-3 win in the first contest.

“This one’s kind of special because I didn’t know if I was going to be able to get this group [to the state tournament] or not because they’re pretty dang young,” Ray said. “I don’t think anybody gave us a snowball’s chance in heck to get there.”

Vann was able to get comfortable quickly as Tahlequah struck for four runs in the top of the second inning.

Nevaeah Moreno was the main catalyst when delivering a two-out clutch double that brought across both Jayley Ray and Vann to make it 3-0.

“She busted it open with that two-out double,” Ray said.

The Lady Tigers also received an RBI single from Ray to left field that scored Mia Allen for the first run, and a double to center field by senior McKenna Wofford that pushed across Moreno and extended the lead to four runs.

“With our backs up against the wall you kinda look the kids in the face out there in the huddle and I just told them, ‘Listen, we’ve got to win the next one with our sticks’, and they did,” Ray said. “We came out and put four runs on the board early and that was huge. That took the wind out of their sails, it really did.”

“I like to hit first because I think a lot of times if you can score it puts pressure on the other team, especially in these tight ball games and winner-take-all games like this,” Ray added.

Vann, who threw a perfect game in Wednesday’s regional opener against Edison, limited Claremore to just three hits. She finished with three strikeouts and did not issue a walk in seven innings.

Vann retired the Lady Zebras in order on two occasions, but her most impressive work came in the opening frame. Claremore had a single from Terran Schnorick and Julia Hoffman got aboard on an error, both with one out, but Vann escaped the pressure by getting Maddox Thomas on a groundout and forcing Alyssa Poorboy into an inning-ended fielder’s choice.

Tahlequah, now 22-16 overall on the season, added its final two runs in the seventh after a lengthy rain delay. Betty Danner delivered an RBI single to center to score Moreno, and Allen singled to drive in Wofford.

In Thursday’s first matchup, the Lady Zebras rallied from a 3-1 deficit to put Tahlequah in a difficult spot.

Claremore got even with two runs in the home-half of the sixth and walked off with the win in the eighth on a Schnorick double to left that scored Emily Rogers.

Two of Tahlequah’s runs came in the opening frame when Danner singled to center to push across Wofford and Hannah.

Class 5A State Tournament play begins Thursday, Oct. 17 in Shawnee. Pairings are expected to be announced this weekend.

“It’s really hard to get there and every time it’s special. This one is really special,” Ray said.