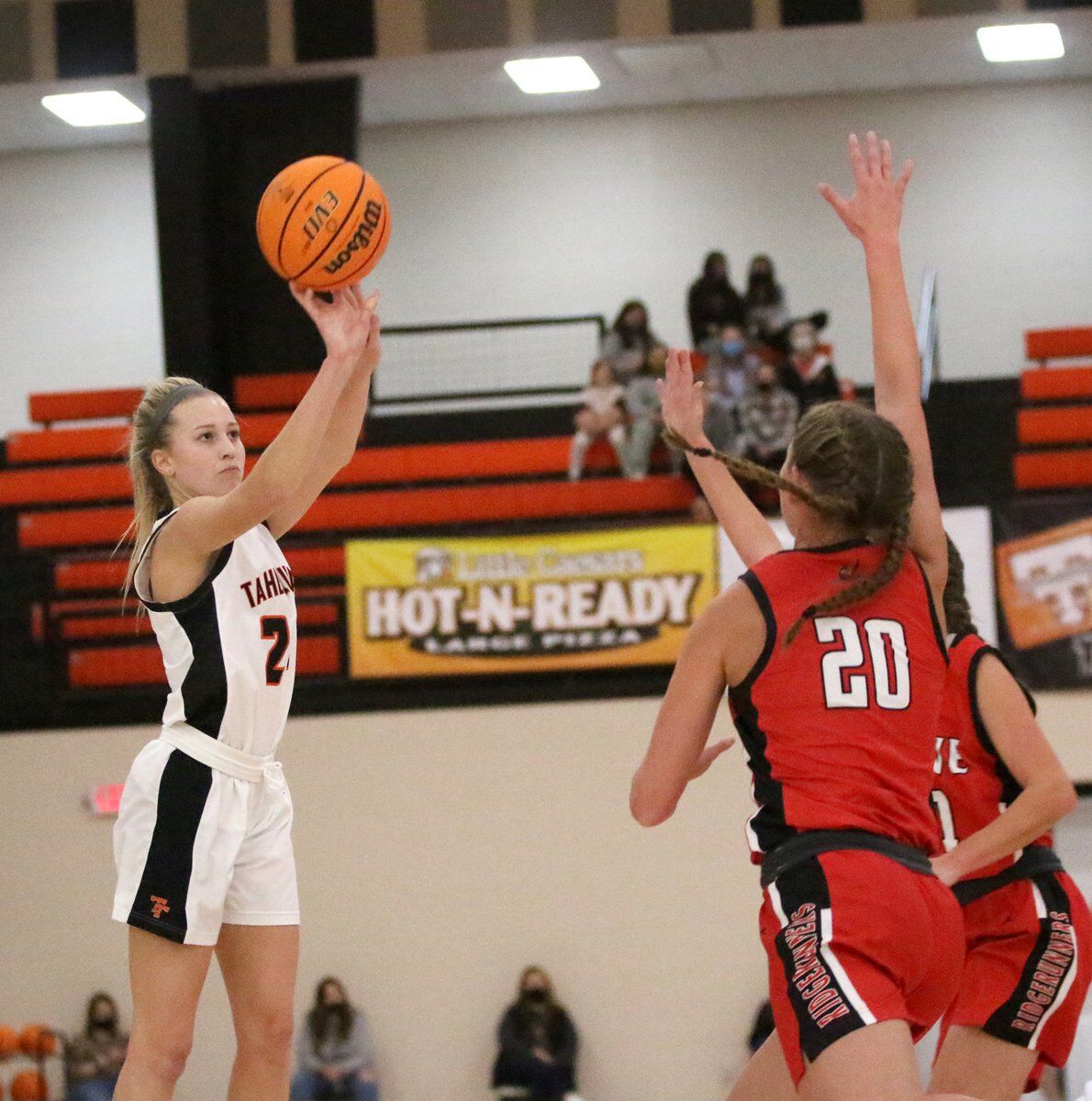 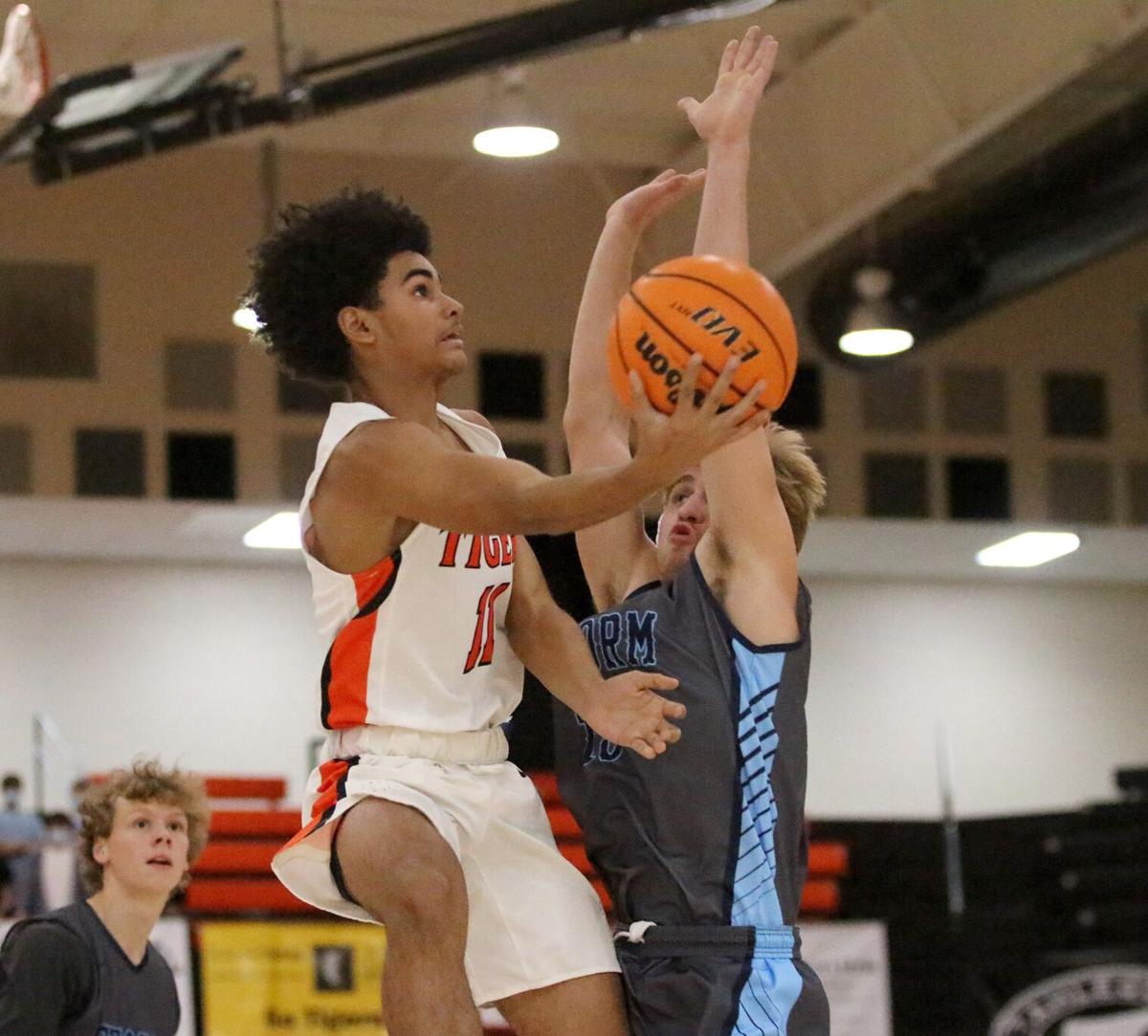 Tahlequah senior guard Trey Young had seven points Saturday in the Tigers' 69-36 win over Skiatook in the Skiatook Invitational.

Tahlequah senior guard Trey Young had seven points Saturday in the Tigers' 69-36 win over Skiatook in the Skiatook Invitational.

Tahlequah put an end to a three-game losing streak Saturday on the final day of the Skiatook Invitational Tournament.

The Class 5A No. 12 Tigers defeated Skiatook, 69-36, behind a career-high 26 points from sophomore forward Hayden Smith. Tahlequah had 11 different players in the scoring column and also got 14 points from guard Qua’shon Leathers.

Tahlequah, now 17th in the rankings, goes into Tuesday’s home contest against Collinsville at 4-5 under first-year head coach Marcus Klingsick. It will be the first of three straight games at the Tahlequah Multipurpose Activity Center for the Tigers, who are 1-2 in Metro Lakes Conference play.

Smith, who had a previous career-high 23 points earlier last week in THS’s 59-56 loss at Coweta, averaged 17.3 points over three days in Skiatook. It was his third game of the season scoring at least 20 points. Against Skiatook, all 26 of his points came on 13 field goals, and he had 16 of his points in the first half.

Tahlequah, who had dropped consecutive games to Coweta, Tulsa Webster and Muskogee, overcame a slow-start bug from its previous two games and jumped on the Bulldogs right away. The Tigers led 21-13 after one quarter and built a 41-14 halftime lead.

Smith had 10 points in the opening eight minutes, while Leathers added seven points on three field goals, including a 3-pointer, and Hayden Wagers had a pair of baskets.

Six different players had field goals in the second quarter. Cale Matlock and Leathers each knocked down 3s, Smith had three baskets, and Walker Scott contributed with two field goals.

Smith had another 10-point quarter in the third and helped extend the Tigers’ lead to 63-27. Trey Young had five points and converted on a 3-pointer, and Leathers scored four points on two field goals.

Tuesday’s contest against Collinsville is scheduled for a 7:30 p.m. start. The 18th-ranked Cardinals enter at 2-2 overall and 0-1 in the conference. They are coming off back-to-back wins over Jay and Lincoln Christian in the Lincoln Christian Tournament last week.

Poindexter, Heard lead Sapulpa past Lady Tigers: Temira Poindexter and Stailee Heard combined for 51 points and lifted Class 5A top-ranked Sapulpa to a 67-42 victory over No. 3 Tahlequah in Saturday’s championship game of the Skiatook Invitational.

The Lady Tigers enter Tuesday’s home contest against Collinsville at 7-2 overall and 3-0 in the Metro Lakes Conference.

Poindexter finished with a game-high 30 points to pace Sapulpa (8-1), while Heard followed with 21. Poindexter buried five 3-pointers and scored 16 of her points in the first half, and Heard had nine field goals and went 3 of 5 from the free throw line.

Sapulpa led 19-10 after one quarter and started to pull away in the second quarter, taking a 35-17 lead into halftime.

Junior Tatum Havens paced Tahlequah in scoring for a third straight game, finishing with 14 points. Havens had 16 points on consecutive days against Guthrie and Muskogee to open the invitational.

The Lady Tigers defeated No. 14 Guthrie, 44-40, in the opening round and defeated Muskogee, 61-48, in the semifinals on Friday to reach the championship game.