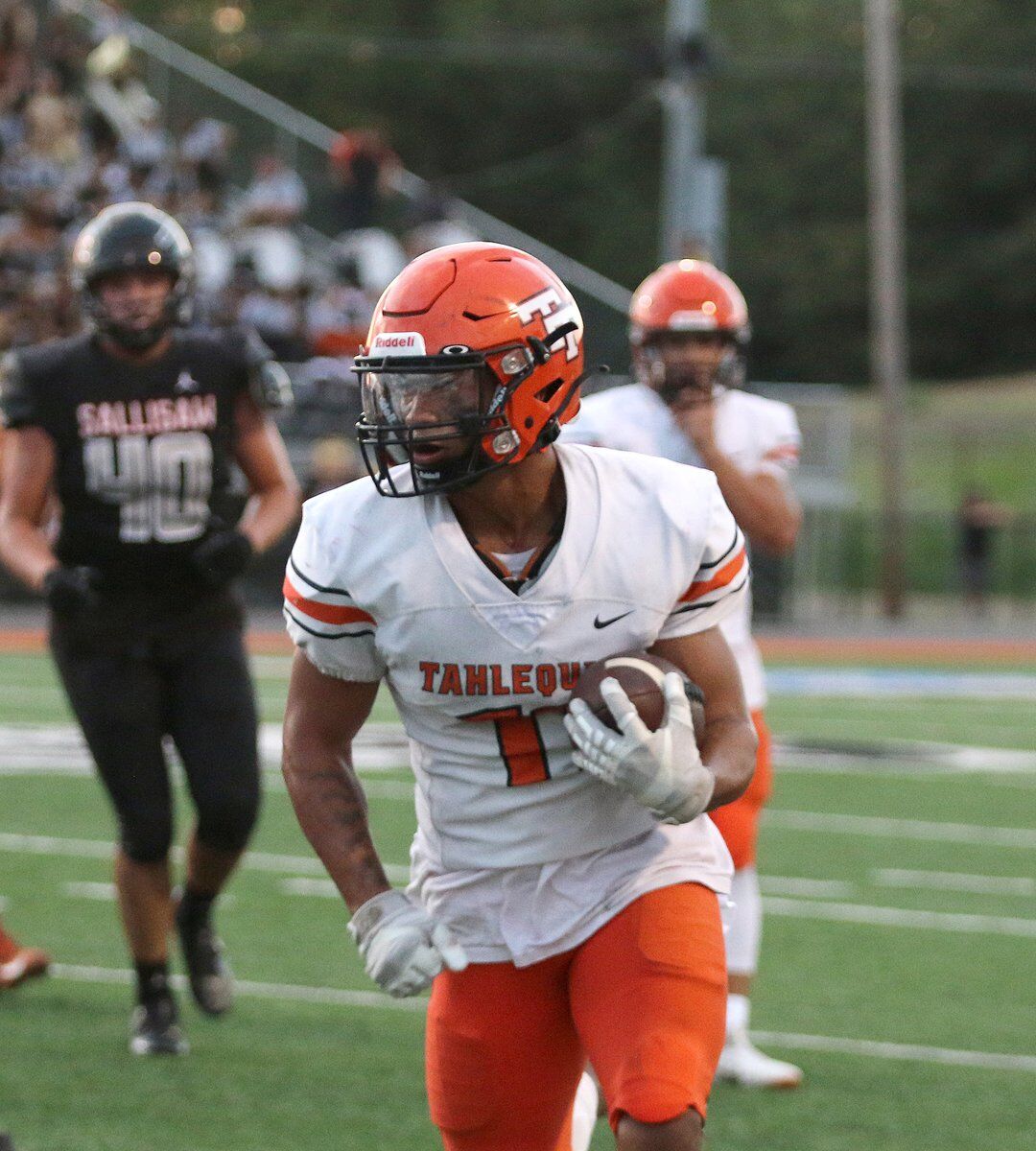 Tahlequah running back Malik McMurtrey runs toward the end zone during the first half against Sallisaw Friday. 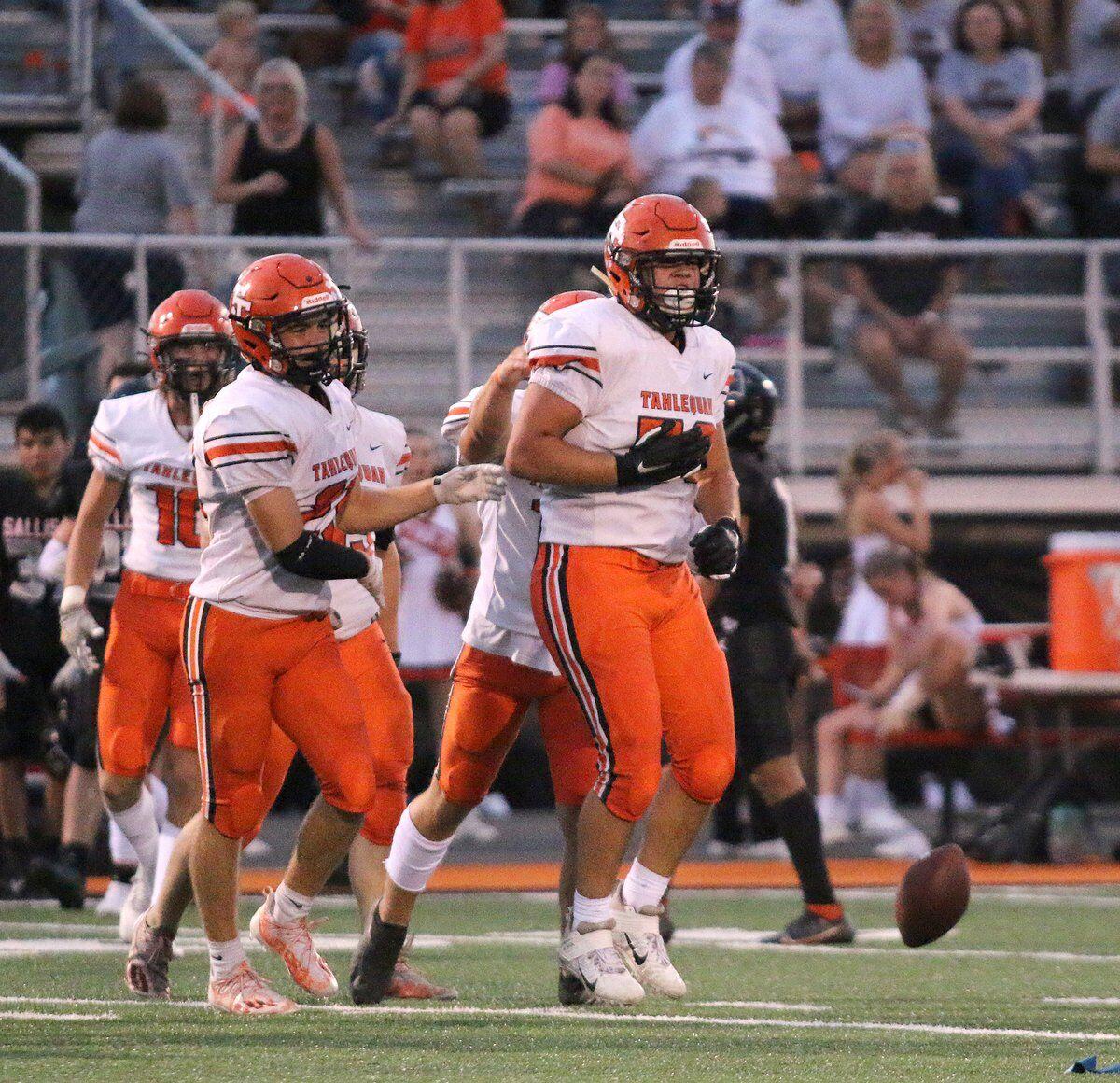 Tahlequah defensive lineman Brycen Smith, right, celebrates with teammates following an interception during the first half Friday against Sallisaw. 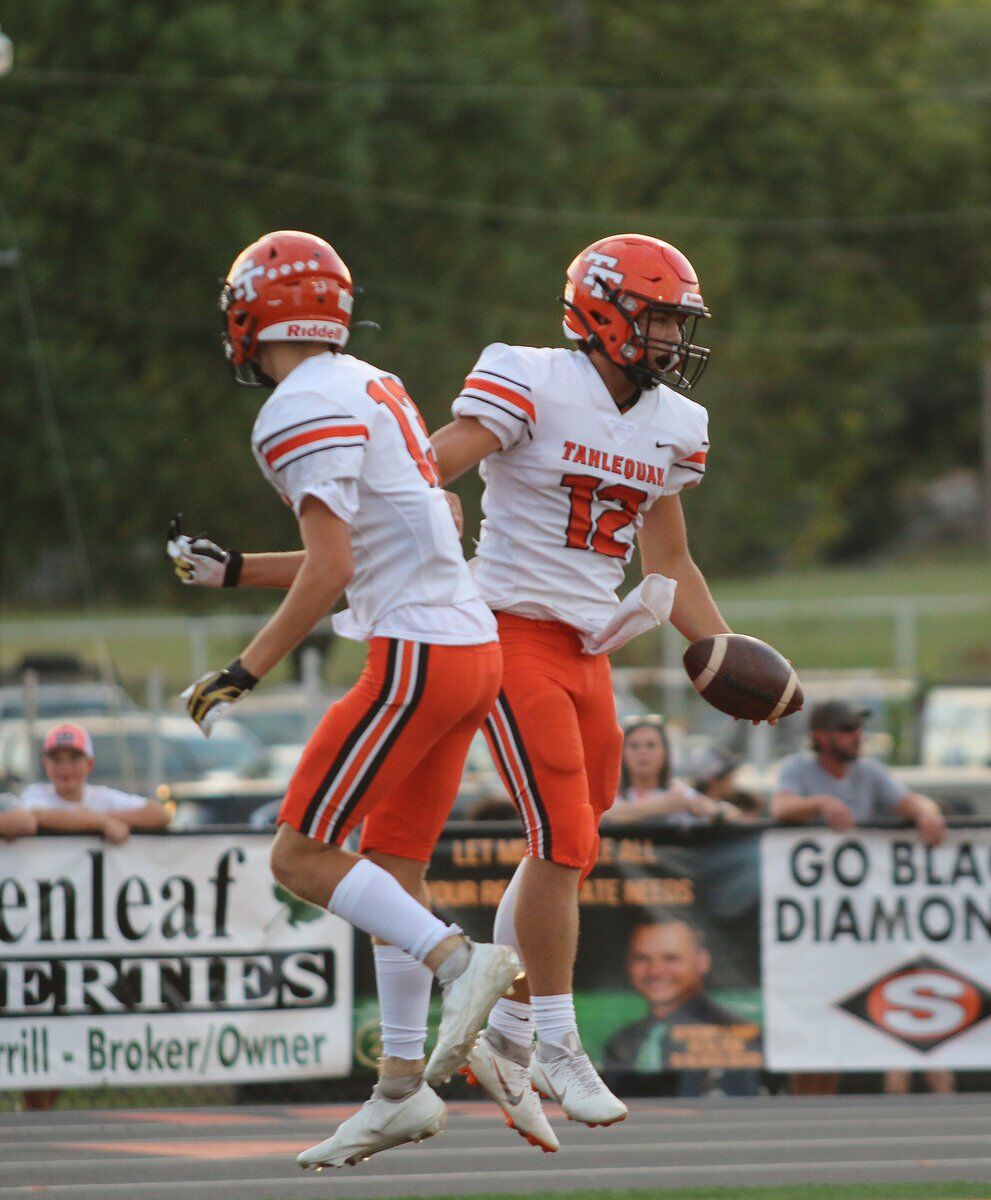 Tahlequah running back Malik McMurtrey runs toward the end zone during the first half against Sallisaw Friday.

Tahlequah defensive lineman Brycen Smith, right, celebrates with teammates following an interception during the first half Friday against Sallisaw.

SALLISAW -- Tahlequah put together its most complete performance of the season Friday.

The Tigers, who also got some much-needed momentum going into District 5A-4 play next week, rolled to a 42-13 win over Sallisaw at Perry F. Lattimore Stadium and improved to 2-1.

Senior running back Malik McMurtrey rushed for a season-high 146 yards and averaged 11.1 yards per carry, and senior quarterback Tyler Joice had two rushing touchdowns and another through the air.

"We improved with working on our alignments like our blocking," Joice said. "We just got more confidence overall. We didn't have as many penalties and we sustained drives really well. I think we cleaned up a lot our things."

Joice completed all eight of his pass attempts for 45 yards, including a 12-yard TD pass to receiver Cale Matlock that made it 42-0 with 3:29 remaining in the third quarter. Joice also started the scoring with an 8-yard TD run at the 10:42 mark of the opening quarter and added his second scoring run in the second quarter that extended Tahlequah's lead to 19-0. He finished with 76 yards on the ground.

The win is the fourth straight for the Tigers against Sallisaw, who fell to 0-3. The two teams didn't meet last year due to COVID-19.

"I think we took a step forward," Tahlequah head coach Brad Gilbert said. "We really just wanted to be physical and establish the line of scrimmage on both sides of the ball. Defensively, we played really well and got after them all night. Offensively, we moved guys tonight and we needed to see that.

"We got good production from three tailbacks and from Tyler, and we were physical up front. We're just trying to figure out who we are and what we can do. So far, this was the best game we've played. The word of the week was consistency, the right way every day. That's something that we harped on and focused upon. That was good to see, and we needed that."

The Tigers needed a confidence booster after last week's 21-7 loss to Wagoner in their home opener at Doc Wadley Stadium. They will host Pryor, who suffered its first loss in a 57-34 setback to Grove Friday, on homecoming Friday, Sept. 24.

"We need to take what we learned and apply it and continue to get better," Gilbert said. "We've got homecoming next week and that's going to be a big challenge against a good Pryor football team."

McMurtrey had the Tigers' other first quarter score with a 9-yard touchdown run at the 4:27 mark. Tahlequah, who led 26-0 at halftime also had consecutive touchdown runs by Darryn Sparh in the second and third quarters. Sparh went for 28 yards to close the scoring in the first half and added a 9-yard TD to extend the lead to 33-0.

The Tigers, who closed with 388 total yards of offense, converted 5 of 11 on third downs and rushed for 329 yards. Sparh had 49 yards on 10 carries, and Josh Munoz added 46 yards on 10 attempts. Parker Lane finished with three receptions for 14 yards, Race Stopp had two catches for 19 yards, and both Coda Bunch and Matlock had two receptions.

The Tahlequah defense forced a safety and two turnovers, including an interception by Brycen Smith, and allowed 208 total yards.