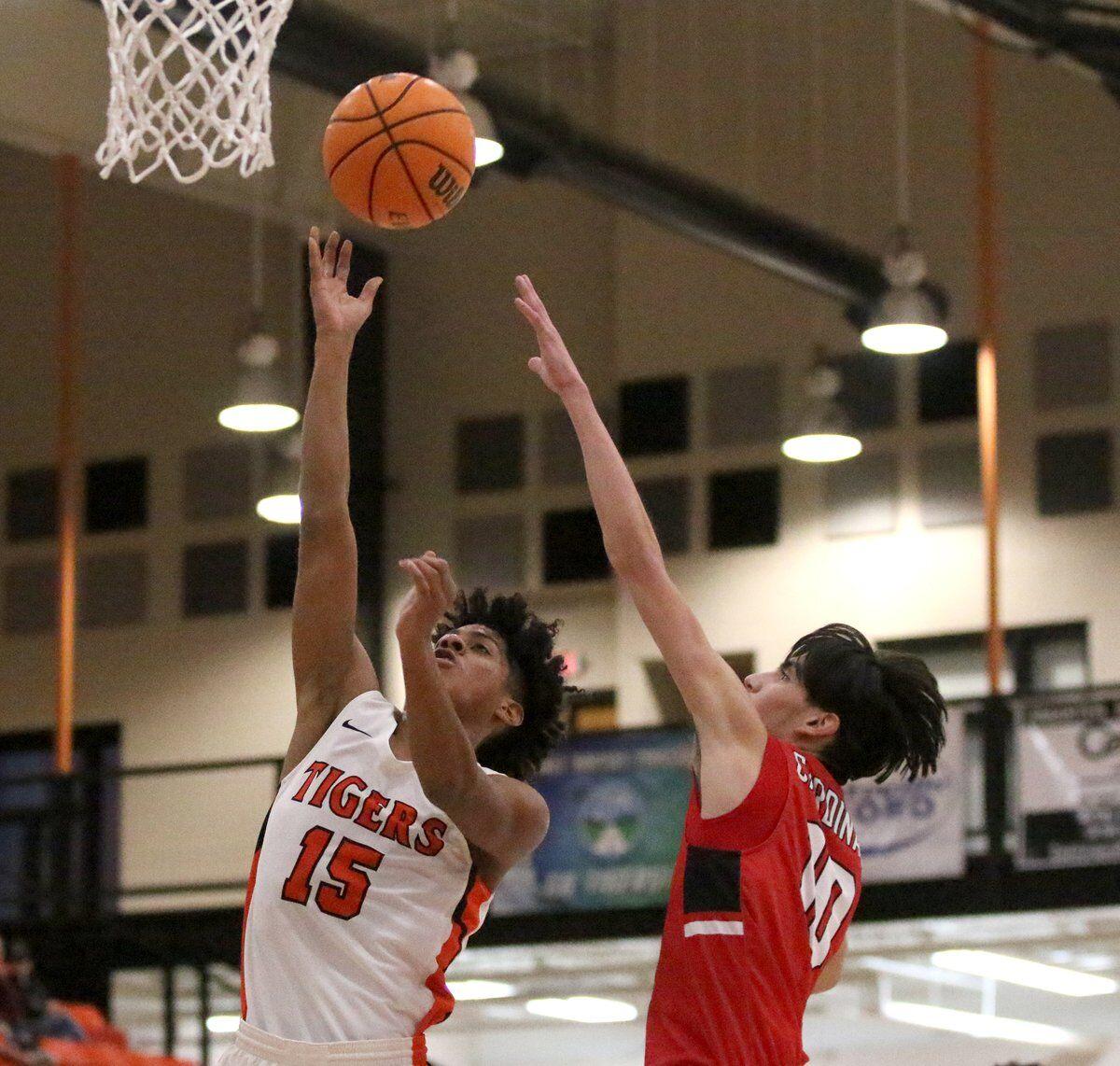 Tahlequah's Tyson Louie goes up for a layup Saturday against Tulsa East Central in the third-place game of the Tahlequah Invitational at the TMAC. Louie scored eight points in his first starting role, and the Tigers defeated the Cardinals 44-43. 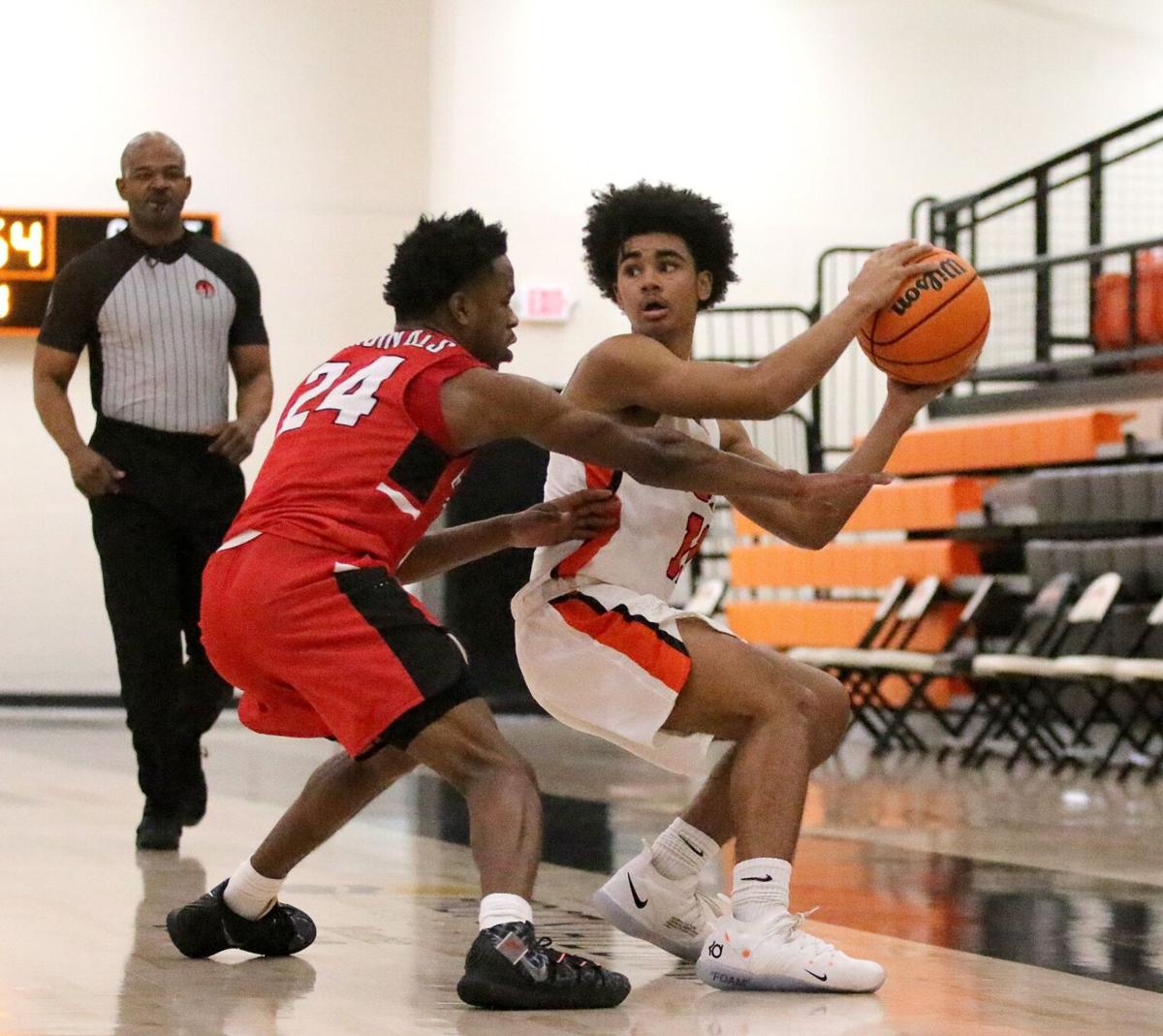 Tahlequah's Tyson Louie goes up for a layup Saturday against Tulsa East Central in the third-place game of the Tahlequah Invitational at the TMAC. Louie scored eight points in his first starting role, and the Tigers defeated the Cardinals 44-43.

Tahlequah bounced back from a miserable Friday performance and held off Tulsa East Central, 44-43, in Saturday’s third-place game of the Tahlequah Invitational at the Tahlequah Multipurpose Activity Center.

The Class 5A No. 15 Tigers, who were without starting sophomore forward Hayden Smith, received a combined 25 points from seniors Hayden Wagers and Trey Young. Smith was unavailable after suffering an ankle injury in the early minutes against Muskogee on Friday evening.

“I thought it was a really good win,” said Tahlequah first-year head coach Marcus Klingsick. “It was a tough game [Friday] and we obviously had the injury [to Hayden] and had to move some people around. I was hoping we would come out and play well, and I thought we did.

“You have to give [East Central] credit. They just kept coming at us. We had some dry spells where we didn’t score for a little bit, but I thought our defense...we switched back and forth defenses and did a pretty good job. It’s a big win.”

Wagers led the Tahlequah with 13 points, six of those coming on three field goals in the opening quarter. Young, who posted a career-high 19 points in THS’s invitational opening win over Oklahoma City Storm on Thursday, drilled two of the Tigers’ three 3-pointers and had two big plays during a crucial stretch in the closing minute.

“We moved [Hayden Wagers] to the five spot for Hayden Smith, and I thought he attacked the rim and got some good plays going there,” Klingsick said. “Trey came back after an off night and shot the ball well.”

Young put Tahlequah up for good at 42-41 on a basket with 53 seconds left. He then had a steal that led to a Tyson Louie score with 30 seconds remaining that proved to be the difference.

The Tigers had to overcome a standout fourth quarter performance by East Central’s Will McGuire. McGuire, who finished with a game-high 23 points, scored the Cardinals’ final 10 points and had all but two of their points over the final eight minutes.

Tahlequah also got solid production from Louie. Louie, filling in for Smith in the starting lineup, closed with eight points. Louie had an inside score at the buzzer to close the first half and give THS a 23-21 lead.

“Tyson played a big role,” Klingsick said. “He started, scored eight points and did some good things. He dove on the floor at the end to preserve a possession and we called timeout, and I thought that was a big play in the game.”

The Tigers led for the entire third quarter, leading by as many as five points on three occasions. A basket by Jaxon Stickels with 31 seconds left that gave them a 36-31 advantage.

Senior guard Qua’shon Leathers added five points for the Tigers, while Tyler Joice, Cale Matlock and Stickels finished with two apiece. Joice was coming off a season-high 10 points against Muskogee.

The Tigers, currently 3-2 on the season and up three spots to No. 12 in this week’s rankings that were released on Monday, went 2-1 over the three-day event. They defeated the Storm, 59-56, and then fell to the Roughers, 59-33, on Friday. Tahlequah’s next scheduled game is Tuesday, Jan. 5 on the road against 5A 16th-ranked Coweta (1-1). The Tigers’ scheduled Tuesday contest against 5A No. 18 Pryor has been postponed due to COVID-19.