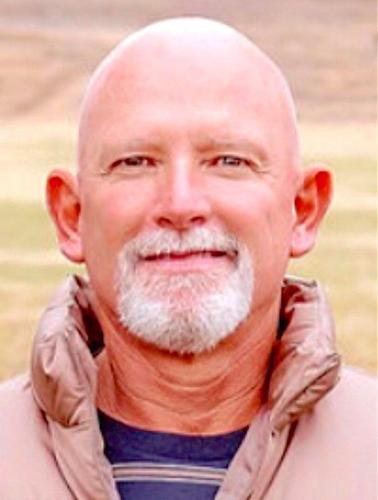 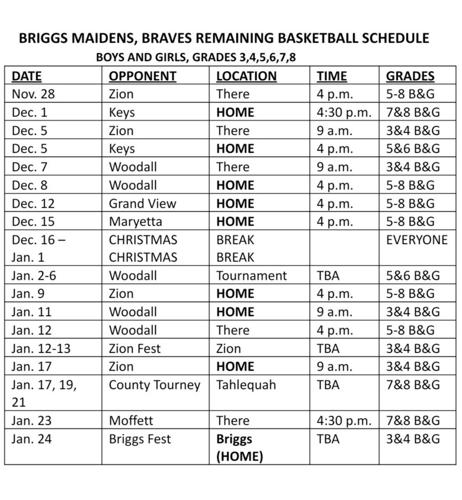 There is a story in the Bible about a young, inexperienced upstart named David, who went out to fight a giant named Goliath, armed only with a sling and some rocks about the size of golf balls or tennis balls. He was a new man with new weapons that only he believed in, yet he won.

The Briggs Maidens and Braves' basketball teams pretty much lost the farm to graduation last year, returning just one of the qp starters. However, the teams are going strong, according to Coach and Athletic Director Mickey O'Donnell. He said both teams are working very hard to get better. It could be because they know about the basketball Goliaths they'll face between now and the end of January.

O'Donnell said the Maidens are 2-4 in the young season. The starting lineup consists of three sixth graders and two eighth graders, which indicates a young team.

Last year's Maidens got to the Organization of Rural Elementary Schools state finals before losing to Woodall. However, four starters from that team graduated, leaving one returning starter. That translates into a rebuilding season for the Maidens, starting from scratch and rebooting. O'Donnell said Briggs is more of a softball school, so with basketball, he said it was really a bunch of softball girls trying to play basketball for right now.

Starting for the Maidens right now are eighth-graders Joselynn Munoz and Addy Bread, and sixth-graders Lilly Garcia, Bentley Smith, and Kallie Stopp. O'Donnell said the girls work hard. He said two of their losses were by two points, and an eight-point loss to Keys was a game the Maidens had a chance to win, but couldn't quite pull it off.

He said the girls were right there, but were making mistakes early on that farther down the schedule will iron themselves out.

The Briggs Braves are 4-2, coming off a season last year when the Braves advanced all the way to the state ORES semi-finals where they lost to Woodall. From that team, no starters are returning. O'Donnell said this year's starters are all eighth graders, which means he'll be having to regroup again next year as well.

Eusebio has recovered from the flu, but is out for a few days while he is playing baseball in Costa Rica with the Dominican Republic National baseball team, along with a former Briggs student, Tripp Rozell.

O'Donnell said all the starters except Eusebio were coming off football, and at times they were still showing some football mentality on the basketball floor. He said he wasn't too worried about it, because they were working hard, and they were all very good athletes. A little later in the season, he said they won't be making those mistakes anymore.

"Right now, we have pans for hands," said O'Donnell.

The starting lineup for the Briggs Braves at present include Eusebio, Alden Jones, Chris Rivas, Ashton Morgan, and Jayden Grayson. O'Donnell said he could easily start about eight different players and not lose anything. He said the Braves had some size with Grayson and Rivas, the big boys on the inside. Eusebio is the main ball handler, but with him out it's rather hard to win a ball game without your point guard, O'Donnell said. Jones is the other guard, and can penetrate or spot up and shoot from outside. Morgan is more of a guard-forward combination, and is not afraid to mix it up with the big guys or dive for loose balls.

Another name that came up in the conversation was Julian Zarate, another part-time starting guard with good work ethics.

Following Thanksgiving break, the Maidens and Braves will pick up again Nov. 28 with grades fifth through eighth, boys and girls, playing at Zion. Games will start at 4 p.m., then the older teams will host Keys on Dec. 1 starting at 4:30 p.m.