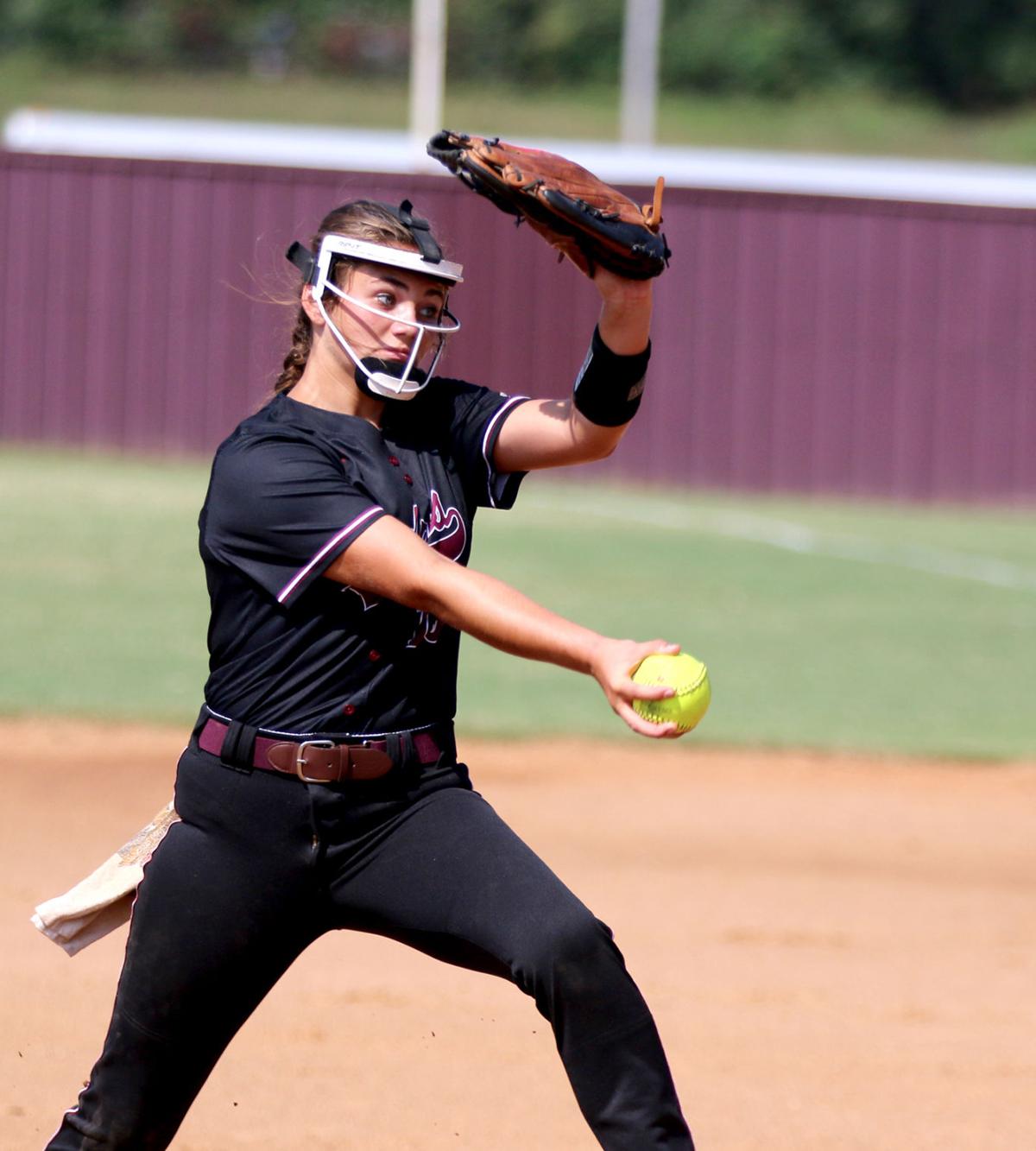 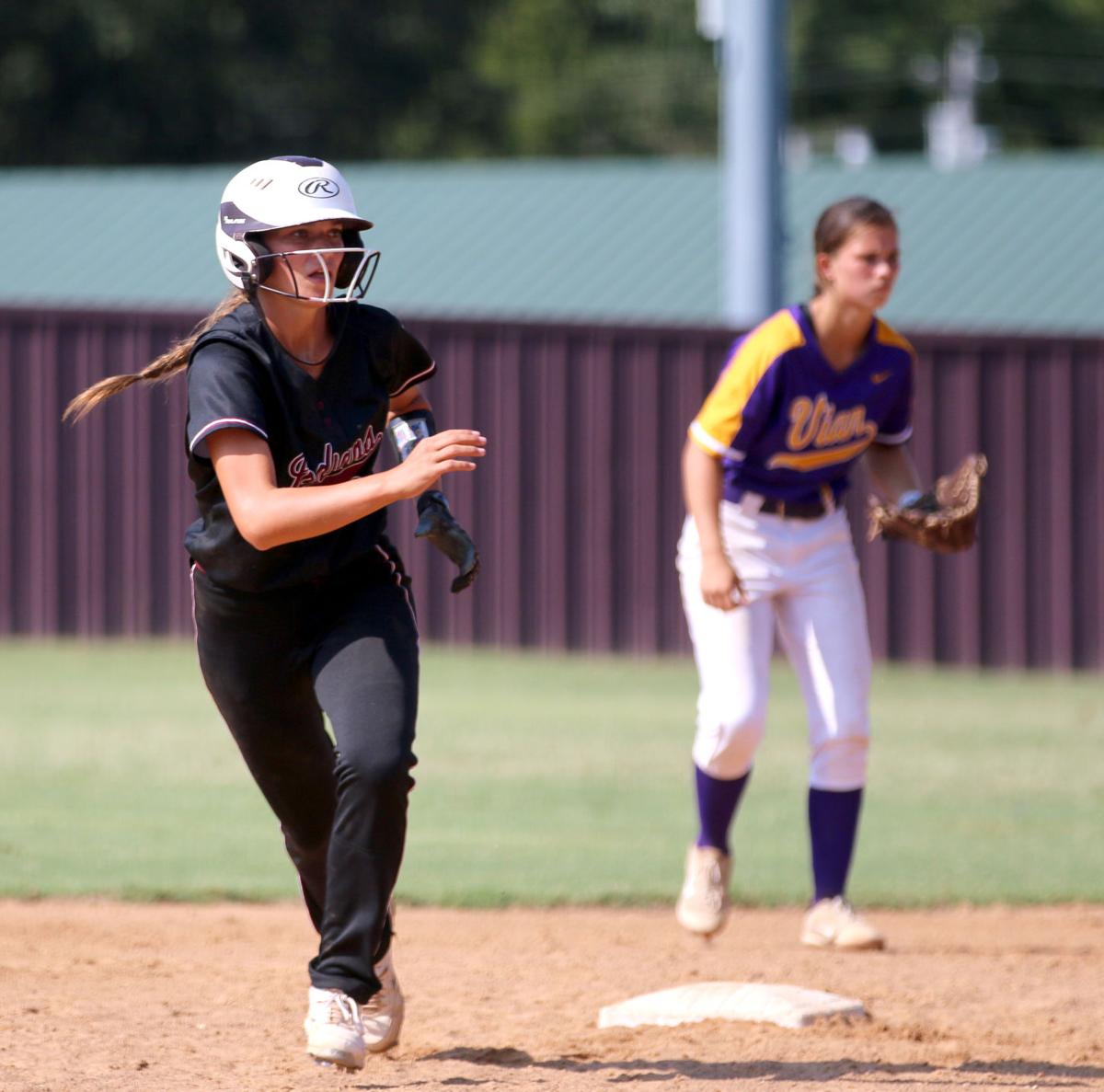 Sequoyah senior Lexy Keys had two hits, including a two-run double, in the Lady Indians' 4-1 win over Vian Thursday in the Class 3A Regional 8 Tournament championship game at Sequoyah High School.

Sequoyah senior Lexy Keys had two hits, including a two-run double, in the Lady Indians' 4-1 win over Vian Thursday in the Class 3A Regional 8 Tournament championship game at Sequoyah High School.

There wasn’t a rush to the pitcher’s circle after Sequoyah captured a fastpitch softball regional championship Thursday afternoon.

Regional titles have become routine and expected over the past decade-plus.

They’re just a way of life for a program that has blossomed under head coach Jeff Turtle.

The Lady Indians disposed of Vian, 4-1, in the championship game of the Class 3A Regional 8 Tournament at Sequoyah High School to secure a spot in next week’s state tournament in Shawnee.

“We’ve been doing this for a while, but it’s hard,” Turtle said. “Everybody thinks it’s not. It’s hard to do this, it’s hard to do it in whatever sport it is here. We don’t take it for granted, but this is where we expect to be. That’s just our mentality here. We play a tough schedule and we think it pays off now.”

“It’s been a good year and hopefully it’ll be another great year after next week,” Turtle added. “We’ve still got to go get three in a row. You’ve got to have some luck, so hopefully things fall our way.”

Sequoyah was by no means dominant like it’s been time after time throughout the season.

The Lady Indians, now with a single-season school record 41 wins, were never really comfortable after cruising to a 10-0 win over Holdenville and a 9-0 win over the same Vian team Wednesday on day one of the regional.

“We struggled at the plate,” Turtle said. “They threw a lot of soft stuff at us. We didn’t stay back, didn’t do a very good on good counts at the plate. When you talk about quality at-bats, we didn’t have very many of them. We had to kinda grind it out today.”

They did get some separation when senior shortstop and leadoff hitter Lexy Keys delivered a clutch one-out double down the left-field line to bring home Shy Stopp and Kyilee Chumley in the sixth inning to make it 4-1 and create some breathing room.

“We finally came through with a big hit from one of our seniors (Keys) and we expect that out of them,” Turtle said.

“It came on an inside pitch and I had been struggling this whole regional with just waiting on the ball,” Keys said. “Every time she threw inside to me I got jammed, so I was just relaxed up there just trying to have a little fun. It was my last time to play on this field so I was telling myself to just relax.”

Keys had two of Sequoyah’s six hits and finished with two RBIs.

“We’re really close,” Keys said. “Everyone has heart on this team. Going back to state, it’s tradition for us to just be there.”

Sequoyah didn’t get its first lead until the top-half of the fifth when senior Madi Joice drove home Keys on a sacrifice fly to right field.

“It means a lot, honestly,” Joice said of reaching the state tournament. “To go four years in a row is definitely not an opportunity everybody gets, and we’re just really blessed here to have that opportunity.”

Joice’s biggest impact came on Wednesday. The Mercer University verbal commit tossed a pair of complete-game shutouts and had 12 strikeouts over 12 innings to push her season record to a perfect 24-0.

On Thursday, it was sophomore Ashlyn Guinn’s turn to shine from the pitcher’s circle.

Guinn settled in after allowing her only run in the opening frame. She followed with six shutout innings, finished with six strikeouts, allowed six hits and did not issue a walk.

Vian’s lone run came after a leadoff double by Kacie Gibbins and later a sacrifice bunt from Macie Smith.

The Lady Indians got even in the third when Wednesday hitting star Amiah Galcatcher reached on an error to force in Chumley after Chumley led off with a double to left. Galcatcher combined for three hits, including a home run, and seven RBIs in Wednesday’s games.

The win is Sequoyah’s 16th straight since falling to Tishomingo on Sept. 7 at the Silo Tournament. Of the Lady Indians’ 41 wins, 20 have been shutouts and eight have come against Class 6A or 5A schools. They started the year with 21 consecutive victories.

“We’ve had a lot of good players and you can’t do what we’ve done without them,” Turtle said. “The group from this year and last year have set the standards pretty high. Hopefully we can finish it off next week.”