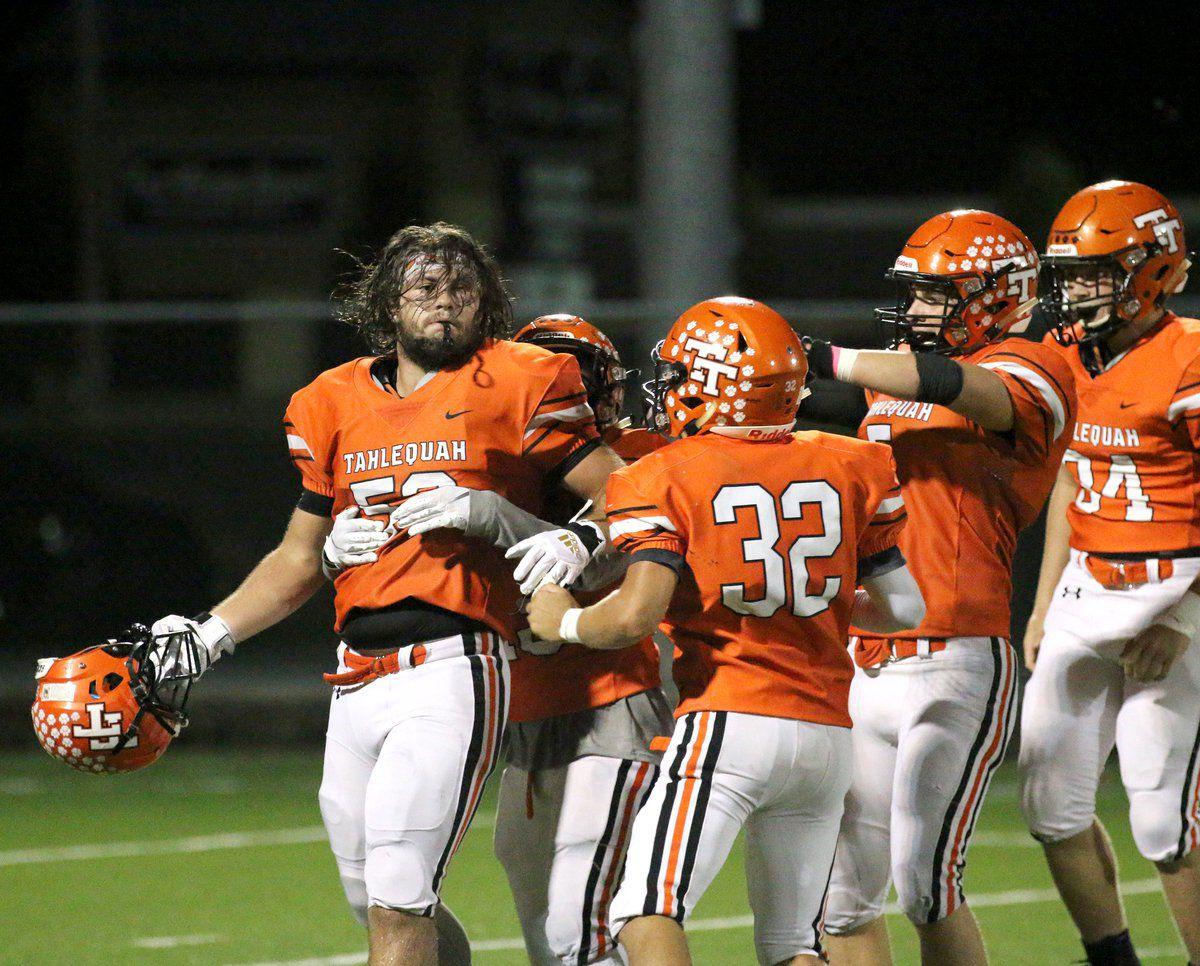 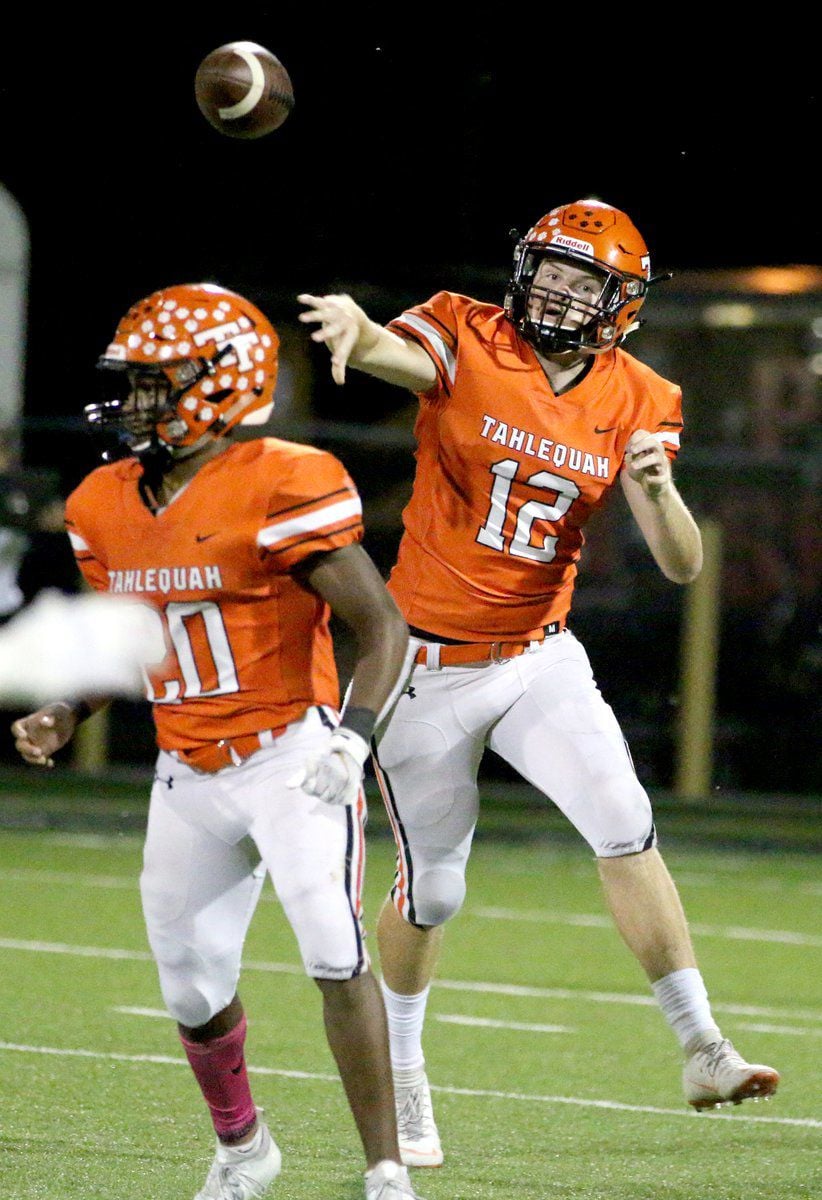 Tate Christian finished off a 65-yard scoring drive on a four-yard touchdown run with 14 seconds left to lift Tahlequah to a dramatic 26-22 win over Skiatook Friday night at Doc Wadley Stadium.

“When we had to had a drive we finally put one together,” Tahlequah head coach Brad Gilbert said. “It’s a situation you’ve got to be prepared for and our young men do a great job of preparing. We work that two-minute drill every week and we didn’t get out of who we were and continued to execute. I think that brings a calmness and a confidence because we do it every week and they know what group of plays are going to be called. It was great to see.”

Christian engineered the perfect ending, completing all six of his pass attempts the final time the Tigers had the ball in their hands. The senior quarterback had three completions to Kobey Baker for 27 yards, twice hooked up Simeon Armstrong for 20 yards, and went to Tristan King for four yards.

“That final drive...we practice it every day,” Christian said. “It’s like we can read the back of our hand or do it with our eyes closed. We just executed and guys made plays, and that’s all that matters. We made plays when we needed to.”

The Tigers never showed panic in the closing minutes or when they fell behind 19-7 in the second quarter. It was the first time they trailed in a game all season.

“It starts at the top with Coach Gilbert,” said Christian, who completed 16 of 20 passes for 166 yards and a touchdown. “He just keeps us very calm. We know what we can do and what we’re capable of. We put in the time, and it paid off tonight.”

Christian’s TD run was set up after a three-yard run by senior running back Dae Dae Leathers. The Tigers were aided by a Skiatook personal foul penalty following a Baker nine-yard catch that put the ball at the Bulldog 6-yard line.

Christian was also a big factor in the punting game. He pinned Skiatook inside its own 10 three different times in the second half.

“Our special teams has been kind of wishy-washy the first couple of games, but we came out here tonight and executed really well,” Christian said. “Coach [Keith] Wilson always preaches, he says, ‘If you can’t score give a short field’, so that’s what we did. Our defense came out and put it to use.”

Tahlequah relied heavily on its defense in the second half with a struggling offense. The Tigers punted four straight times before the clutch drive.

“We couldn’t get out of our own way in the second half,” Gilbert said. “It just seemed like holding after holding. The defense stepped up and made play after play, and Tate’s three punts inside the 20-yard line were fantastic. The name of the game is field possession. You’ve got to win field possession, so special teams did a great job tonight.”

The Bulldogs (2-3, 0-2) had two electric plays in the first half and momentarily took control with 19 straight points. Standout receiver Jayden Garner had 66 and 67-yard TD receptions from quarterback Mason Willingham, and Willingham added his third touchdown pass to Cash Cooper to give Skiatook a 19-7 edge with 7:48 left before halftime.

Leathers, who finished with a game-high 90 rushing yards on 19 carries, had a pair of TD runs in the first half. He scored from three yards out on Tahlequah’s opening possession and then got the Tigers to within 19-14 on a 13-yard touchdown in the second quarter.

Christian gave Tahlequah the lead back at 20-19 on a 33-yard scoring toss to receiver Simeon Armstrong at the 1:20 mark of the second quarter.

The Tigers closed with 295 total yards of offense. Baker led all THS receivers with seven catches for 73 yards. Armstrong finished with four receptions for 60 yards.

Qua’shon Leathers had an interception in the end zone that spoiled Skiatook’s opening possession in the second half.

Tahlequah will be on the road over the next two weeks. The Tigers visit Collinsville next Friday and No. 10 Pryor the following week. The seventh-ranked Cardinals defeated Tulsa Memorial, 49-0, Friday to move to 4-1 overall and 2-0 in district play.