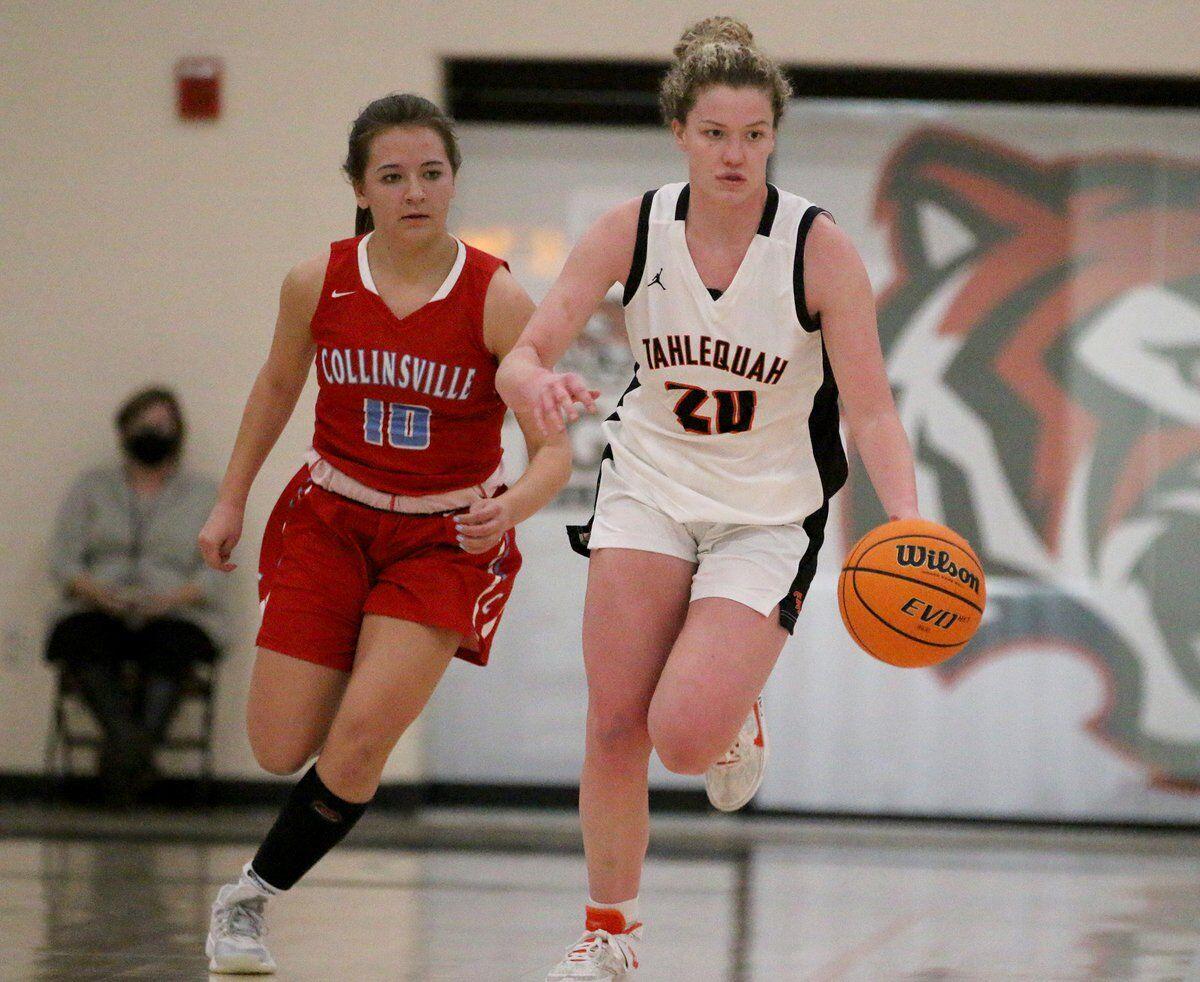 Tahlequah forward Faith Springwater had nine points and game-winning basket in the Lady Tigers' 52-50 win over Collinsville Tuesday at the TMAC. 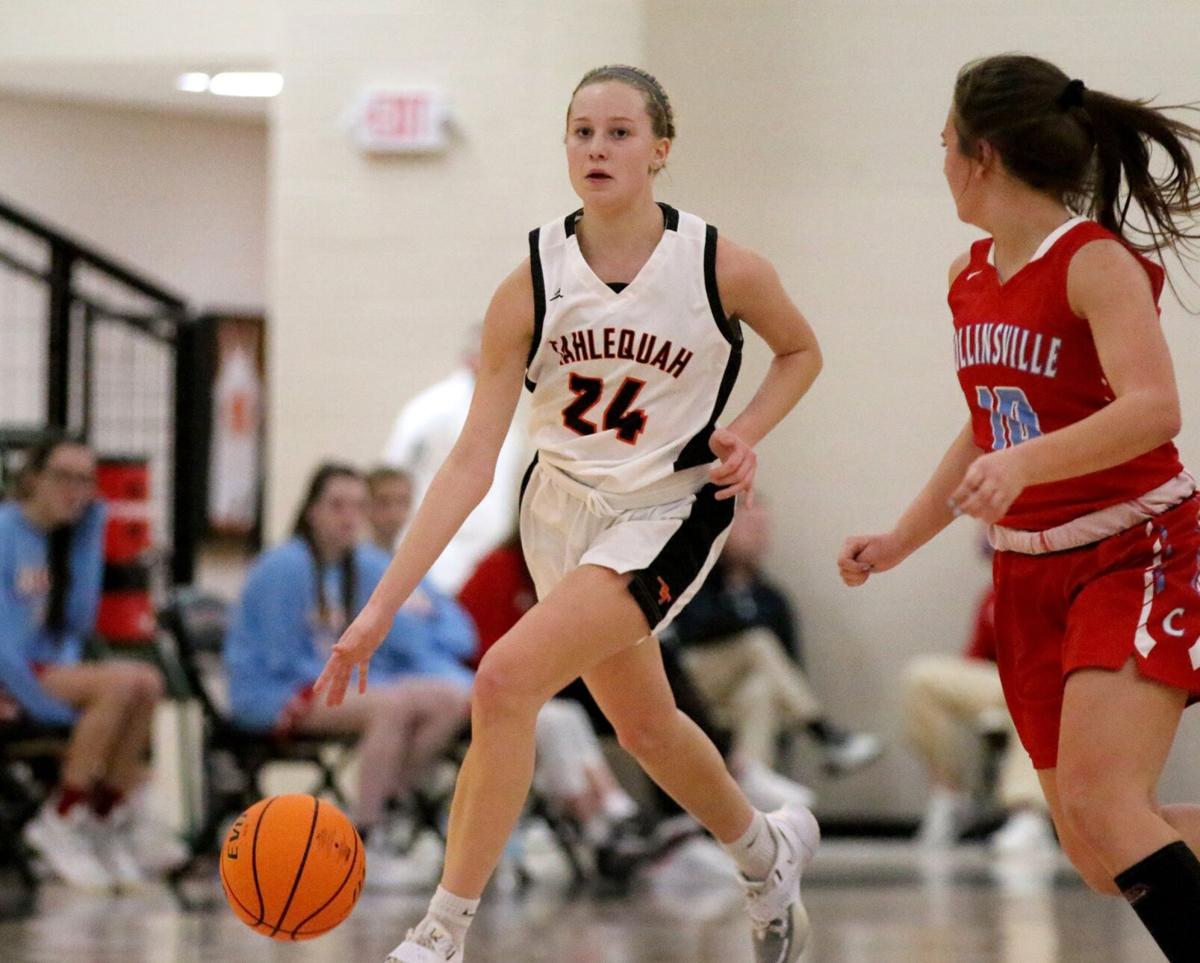 Tahlequah forward Faith Springwater had nine points and game-winning basket in the Lady Tigers' 52-50 win over Collinsville Tuesday at the TMAC.

Tahlequah climbed out of a huge hole Tuesday and avoided an upset, edging Collinsville, 52-50, at the Tahlequah Multipurpose Activity Center.

The third-ranked Lady Tigers overcame a 20-point second half deficit and were lifted by a Faith Springwater basket with 1:34 remaining.

Tahlequah bounces back from a 67-42 loss to top-ranked Sapulpa Saturday in the championship game of the Skiatook Invitational and improves to 8-2 overall under head coach David Qualls. The Lady Tigers stay unbeaten in Metro Lakes Conference play, moving to 4-0.

“The odds weren’t in our favor being down 20,” Qualls said. “I’m happy we pulled it out and won the game, but I’m disappointed that we dug ourselves a hole. We hit three shots the entire first half...that’s just poor shooting. They hit seven 3s in the first half and had a lot of second chance opportunities.”

It looked bleak for Tahlequah after Collinsville went up 42-22 at the 3:00 mark of the third quarter on a 3-pointer by Segen Henley. It would be the Lady Cardinals largest lead of the contest.

“[Collinsville] came out ready to play and shot the ball well,” Qualls said. “You have to give them a lot of credit. I felt like we were ready to play.”

The Lady Tigers stormed back behind a 12-0 run to start the fourth quarter and got to within 48-45 with 4:26 remaining. Jadyn Buttery started the surge with a layup, Naida Rodriguez followed with a basket, Buttery converted a free throw, Tatum Havens had a basket, Rodriguez added her second field goal, Springwater had a steal and basket, and Lily Couch completed the run with a free throw.

Collinsville’s final points came on a Brie Smith field goal that ended the run and put the Lady Cardinals up 50-45.

“I’m proud of the way we dug down, and it’s good to a win like this,” Qualls said. “You don’t want to get in a habit of turning the switch on and off. We definitely amped up the pressure. We just wanted to give ourselves a chance.”

Collinsville knocked down six of its eight 3-pointers during the second quarter to put Tahlequah in a difficult spot. The Lady Cardinals went on a 17-3 run and were fueled by a pair of 3s from Henley and one apiece from Addison Wickman, Kelly Ellis, Lexi Gregory and Smith. They took a 29-15 lead on Gregory’s trey and led 32-17 at halftime.

Havens, who led Tahlequah in the scoring column for the fourth straight game with 14 points, had the Lady Tigers’ lone field goal in the second quarter.

Freshman forward Kori Rainwater joined Havens in double figures with 11 points, while both Springwater and Couch had nine points.

The Lady Tigers were without senior point guard Kacey Fishinghawk, who suffered an ankle sprain in Saturday’s loss to Sapulpa. Naida Rodriguez got the starting nod and contributed with four points.

“She’s progressing, so that’s good,” Qualls said of Fishinghawk. “She went from not being able to put any weight on it Saturday to getting out and dribbling a little bit today. I think next week is our target for getting her back.”

The Lady Tigers will host Claremore in a 6 p.m. tipoff Friday for the second of three consecutive home games.