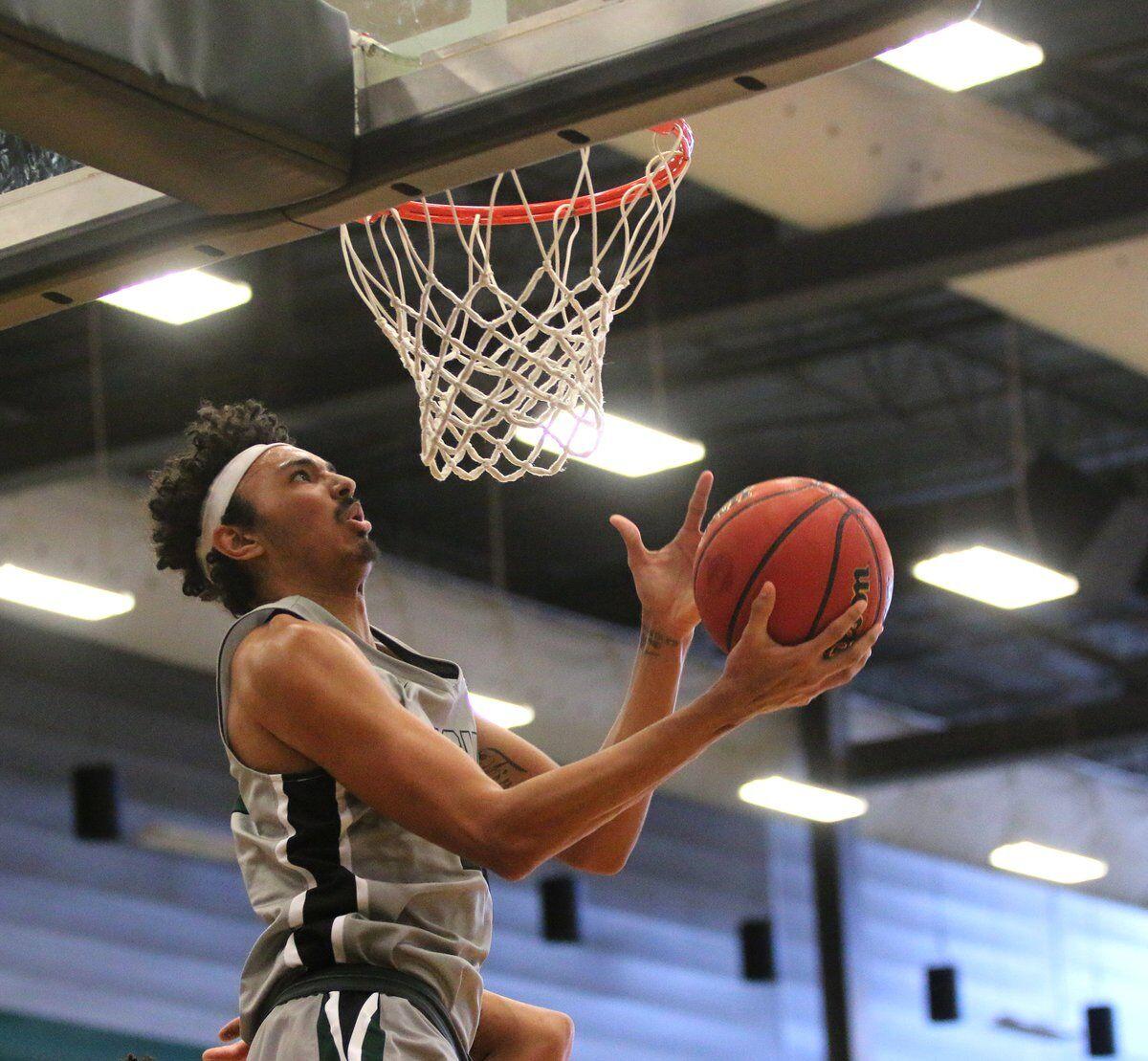 Northeastern State junior forward Trey Sampson goes up for a layup Tuesday afternoon against Missouri Western at the NSU Event Center. Sampson finished with a game-high 22 points in the RiverHawks' 103-82 loss. 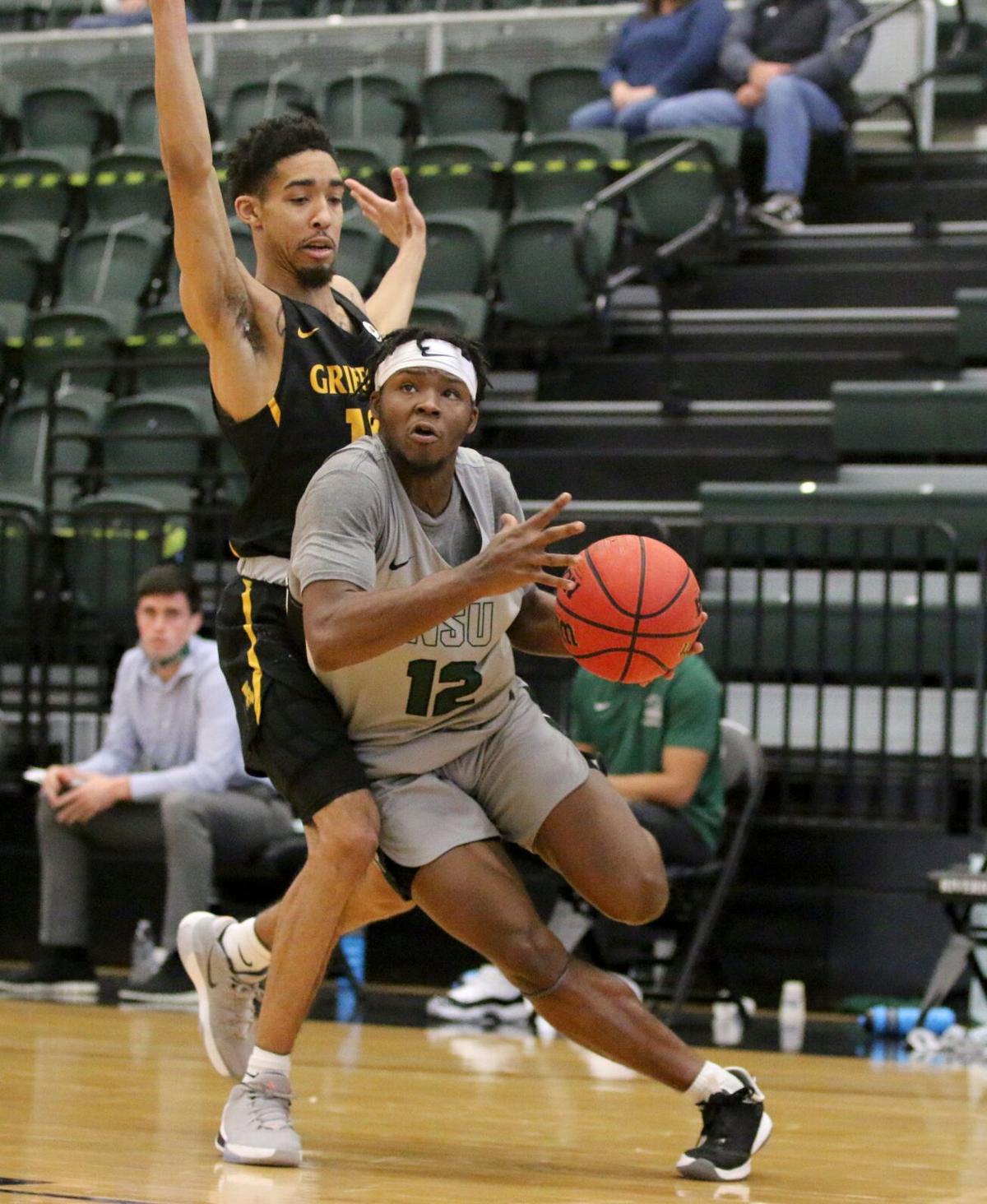 Northeastern State junior forward Trey Sampson goes up for a layup Tuesday afternoon against Missouri Western at the NSU Event Center. Sampson finished with a game-high 22 points in the RiverHawks' 103-82 loss.

Northeastern State’s struggles on the defensive end continued Tuesday afternoon in the RiverHawks’ return to the NSU Event Center.

It’s the second straight loss for the RiverHawks, who fall to 1-3 under first-year head coach Ja Havens. The Griffons stay unbeaten, moving to 4-0.

Through four games, opponents are shooting 50.6 percent overall from the floor against NSU. The Griffons had 36 field goals, went 9 of 22 from behind the 3-point arc and shot 31 free throws. Tyrell Carroll paced MWSU with 21 points, while Caleb Bennett added 20.

“We couldn’t get stops,” Havens said. “At no point were we able to get any kind of defensive flow going. They took the ball where they wanted. We didn’t communicate. We were bad in transition. We didn’t get the ball stopped enough.”

The Griffons also outrebounded the RiverHawks, 47-26. They had 17 offensive rebounds and 24 second chance points.

“We added it up...they missed 32 shots and rebounded 17 of them,” Havens said. “They rebounded more than we did at their misses. You can’t do that and have a chance. Obviously, there are things we need to address and be better.”

Junior forward Trey Sampson finished with a career-high 22 points to lead NSU, who shot 47.5 percent overall. Sampson shot 9 of 12 from the floor and went 4 for 4 from the free throw line.

The RiverHawks received a strong performance from their trio of forwards. To go along with Sampson, sophomore Daniel Dotson came off the bench to score 15 points, and junior Obi Agu was also in double figures with 11 points.

“Daniel Dotson did a great job coming off the bench,” Havens said. “He was really efficient for us and really tried to do what we wanted him to do. He’s screening and playing off of it, and getting himself in good positions, and he can shoot the ball. The forwards did have some production today, in particular Daniel coming off the bench. I thought he gave us a spark.”

The RiverHawks, playing their third game in six days, trailed 45-36 at halftime and were down 68-46 with 13:42 remaining after Missouri Western went on a 10-0 run. The Griffons got back-to-back 3-pointers from Will Eames and Reese Glover to start the surge, and Eames capped it with a layup.

NSU trimmed the Griffons’ lead to 76-63 with 7:22 left following a basket by junior guard Rashad Perkins, but never got closer.

Perkins closed with 13 points, and senior guard Brad Davis added 12. Davis had two of NSU’s four makes from 3-point territory and had a team-best five assists.

NSU was without leading scorer, Caleb Williams, who was injured during the second half of Saturday’s game at Pittsburg State. Williams, averaging 18 points per game, poured in 36 points in the RiverHawks’ 90-89 upset win at No. 21 Missouri Southern on Dec. 3.

“He’s going to get evaluated on Monday,” Havens said. “Going to do an MRI and hopefully know more. He’s out for right now, and we’re obviously hoping for the best and hoping for him to be as healthy as possible as quickly as possible.”

Missouri Western reached the century mark for the second straight game. The Griffons, who defeated Central Missouri, 100-81, on Saturday, also received 16 points from Eames and 10 from Jaron Thames.

The RiverHawks will play their next two games on the road. They visit Fort Hays State on Dec. 18 and then travel to play Nebraska-Kearney on Dec. 20.

“Five nights ago, you beat a top 25 team on the road then come home and have that kind of effort,” Havens said. “We need to do some soul searching right now to figure out where we are mentally. That starts with the head coach, and we were outworked in every phase of the defensive side of the ball today.”