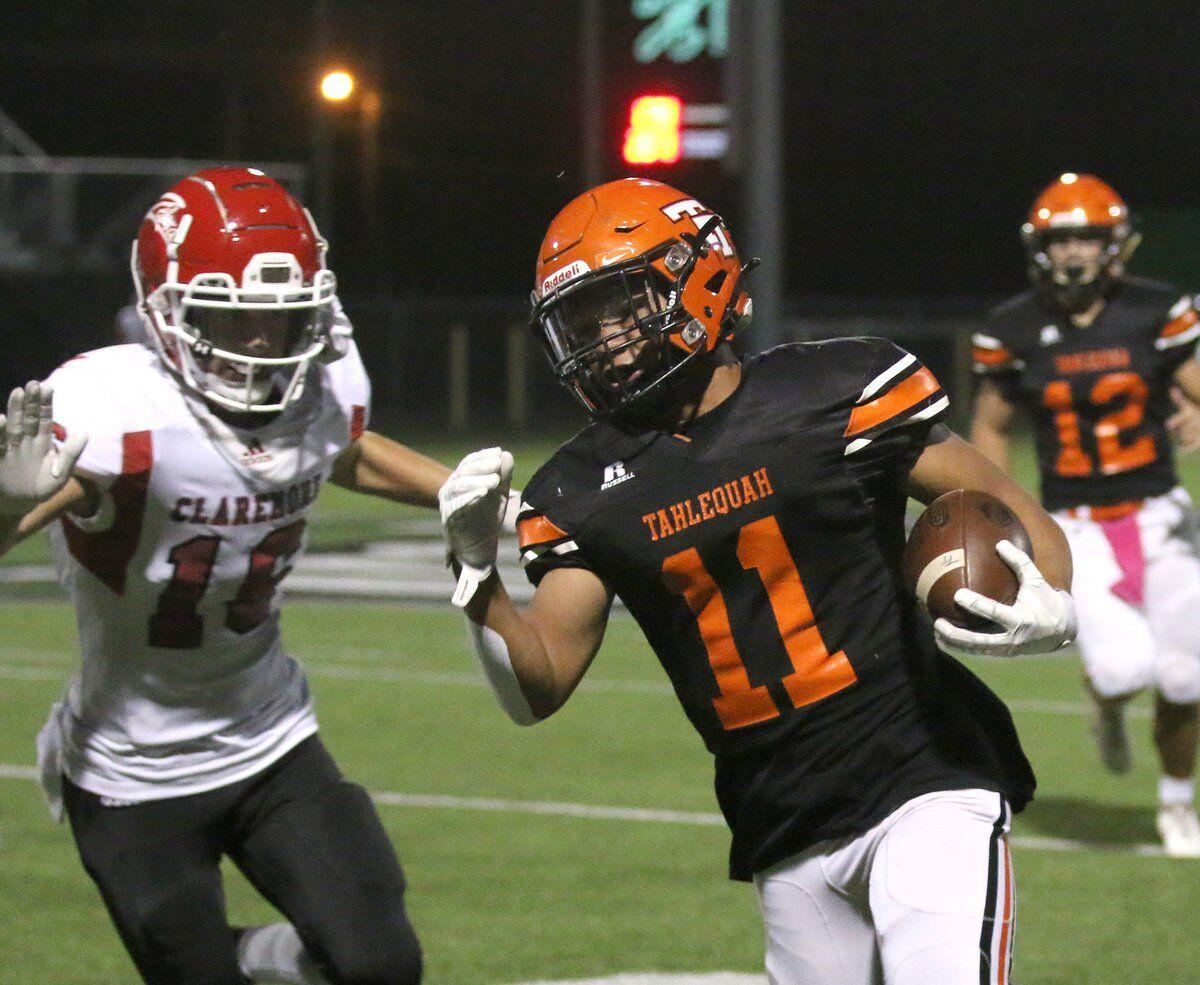 Tahlequah junior running back Malik McMurtrey rushed for 151 yards and two touchdowns in the Tigers' 37-7 win over Claremore Thursday. 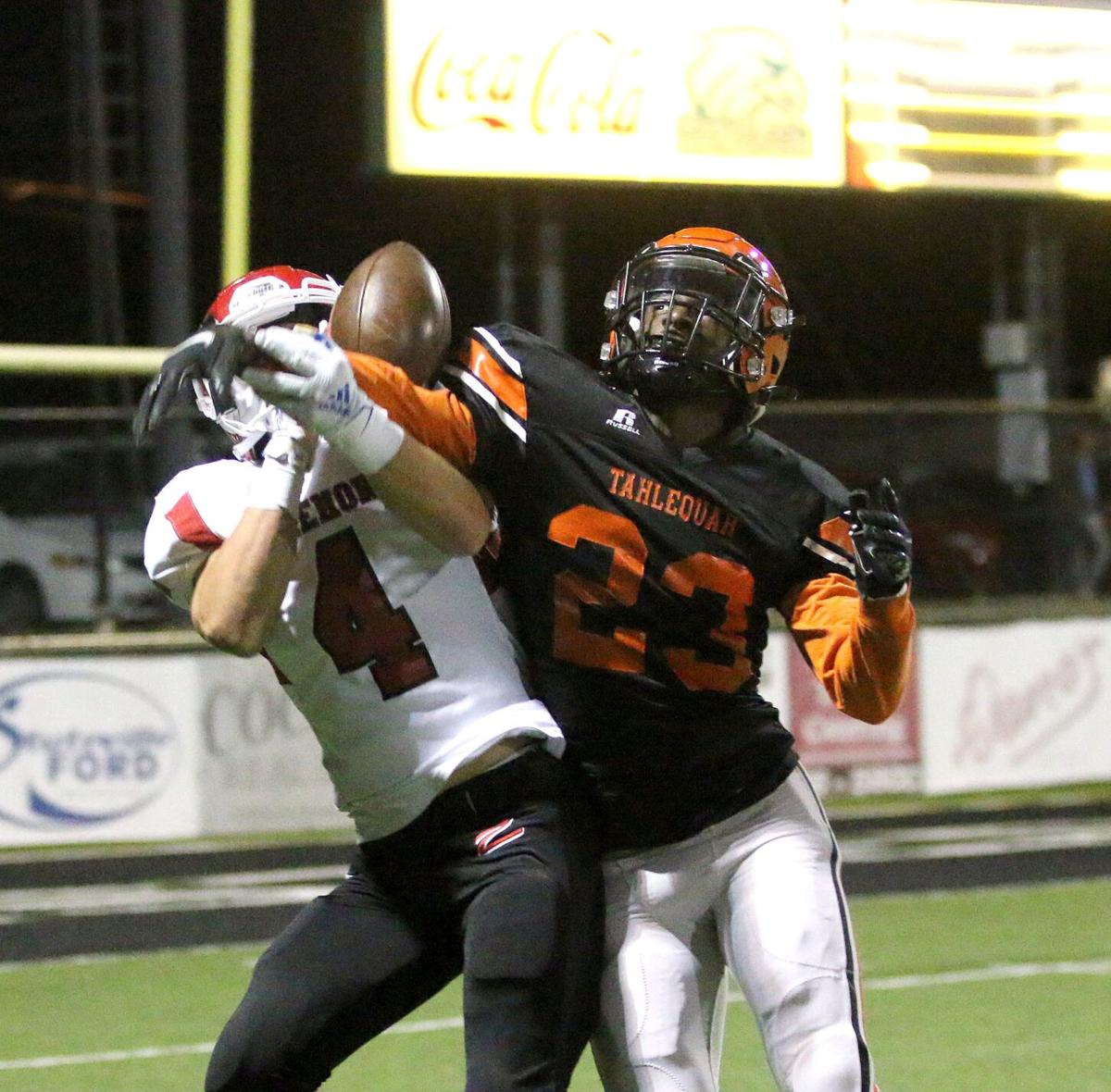 Tahlequah senior defensive back Qua'shon Leathers breaks up a pass during the second half against Claremore Thursday at Doc Wadley Stadium.

Tahlequah junior running back Malik McMurtrey rushed for 151 yards and two touchdowns in the Tigers' 37-7 win over Claremore Thursday.

Tahlequah senior defensive back Qua'shon Leathers breaks up a pass during the second half against Claremore Thursday at Doc Wadley Stadium.

Tahlequah was in full command from the very start in an important District 5A-4 game against Claremore Thursday night at Doc Wadley Stadium in Tahlequah.

The Tigers scored a pair of quick touchdowns and never looked back in a 37-7 win over the Zebras.

The win puts Tahlequah at 3-3 overall and 2-1 in district play under head coach Brad Gilbert with a road game against Glenpool coming up on Friday, Oct. 23.

Junior running back Malik McMurtrey rushed for 151 yards on just 11 carries, started the scoring with a 33-yard touchdown run, and added a 17-yard scoring run in the fourth quarter that put the game out of reach at the 5:35 mark of the third quarter.

“We’ve been close, we just hadn’t been able to kick the door down, but tonight we were able to,” Gilbert said. “The kids had a really good week all week and we just keep getting better. It’s great to see an outcome like this. It’s great for these young men to be rewarded for everything that they’ve done and all the hard work they’ve put forward. They keep coming to work everyday, even though things haven’t been as good as we would’ve liked.”

The Tigers received a huge boost following McMurtrey’s first score when Claremore fumbled the ensuing kickoff. Junior quarterback Tyler Joice capped a 31-yard drive with a 1-yard TD run that put Tahlequah up 13-0 at the 8:25 point of the opening quarter.

“We gained a lot of momentum right there with the turnover on the kickoff,” Gilbert said. “We were able to go in and put it in. Anytime you can get a touchdown off a turnover, especially on special teams, it swings the momentum. It was big for us at that point and time and gave us a 13-0 lead early and we really never looked back.”

Tahlequah increased its lead to 16-0 on a Hunter Smith 22-yard field goal in the first quarter, and after Claremore’s lone touchdown on a 69-yard pass and catch from quarterback Scout Cutsinger to receiver Aidan Stimson, the Tigers went into halftime with a 23-7 advantage after senior Kobey Baker got into the end zone from two yards out with six minutes left.

The Tigers scored their final points on a Joice 4-yard touchdown pass to senior receiver Tanner Christian with nine seconds remaining in the third quarter.

Tahlequah closed with 373 total yards of offense, 238 of those on the ground. Joice completed 8 of 10 passes for 135 yards and rushed for 31 yards, Baker added 29 rushing yards and four receptions for 51 yards, and McMurtrey had two catches for 60 yards.

“When you have a quarterback that can run, and Tyler’s gotten better every week, I think that’s just a dimension that you have to account for, and it’s tough. You’ve seen the development of Tyler, and the offensive line has come a long ways. Malik also makes a big difference and we didn’t have him for two games. You can see the development of our offense.”

Defensively, the Tigers limited the Zebras to 193 total yards, 69 of those coming on their only score. Junior linebacker Eli McWilliams and senior safety Qua’shon Leathers each had an interception, and the Tigers held Claremore to 78 rushing yards.

“We’re physical and we run to the football,” Gilbert said. “We’re not the biggest team, and we might be smaller than we’ve ever been, but our kids continue to show back up every snap. Anytime you can hold a Claremore team to seven points, it’s going to be a good night for us. Our defense plays well all the time.”

Claremore, who dips to 4-3 overall and 2-2 in the district, ended Tahlequah’s bid for a perfect regular season last year in week 10 at Doc Wadley Stadium.

“We’ve lost to some really good teams,” Leathers said. “Wagoner is really good and hasn’t lost any games...just great teams that we’ve played against and we played well. We just couldn’t connect. We connected tonight and I think we’re moving forward.”