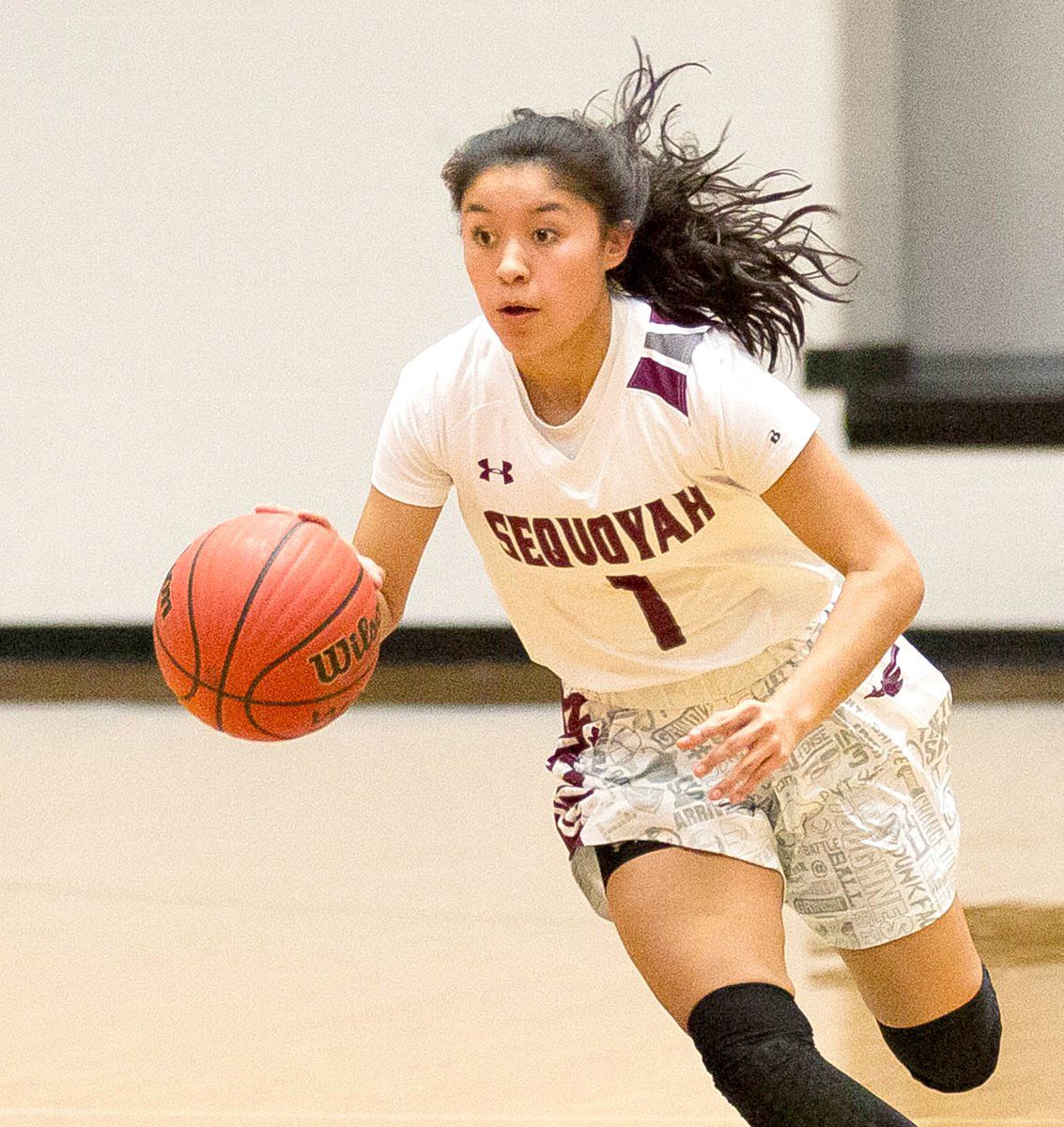 Sequoyah's Aubrey Brown brings the ball up the court Saturday against Sperry at Sequoyah High School. 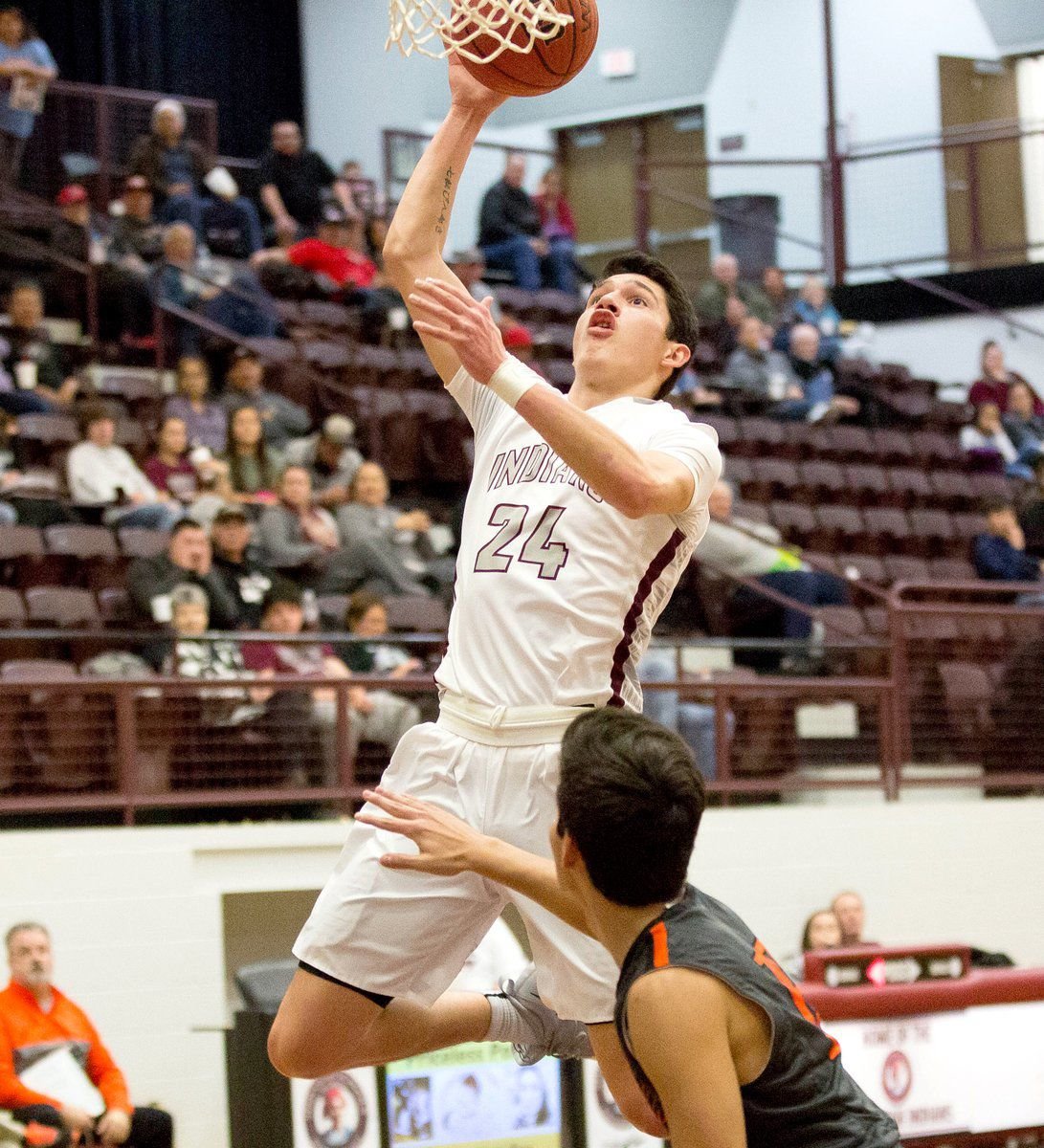 Sequoyah senior forward Blaine Garner rises for a shot over a Sperry defender Saturday at Sequoyah High School. The Class 3A No. 5 Indians defeated the Pirates, 58-22, to claim a district title.

Sequoyah's Aubrey Brown brings the ball up the court Saturday against Sperry at Sequoyah High School.

Sequoyah senior forward Blaine Garner rises for a shot over a Sperry defender Saturday at Sequoyah High School. The Class 3A No. 5 Indians defeated the Pirates, 58-22, to claim a district title.

After a tough loss to Fort Gibson in their last outing, the Sequoyah Indians bounced back with a dominant victory over Sperry in their district playoff matchup, 58-22, on Saturday night at Sequoyah's The Place Where They Play.

The Indians used a full-court press from the opening tip to overwhelm the Pirates, as the Indians jumped out to an 11-0 run. Sperry's lone basket in the first quarter was a three-pointer with under a minute left in the quarter.

"Our press was able to force a lot of turnovers from them early," said Jay Herrin, Sequoyah boys head coach.

The Indians took a 15-point lead into halftime, and held the Pirates to just eight points in the first half. The Pirates threw several defenses at the Indians in the second half to try to keep them off balance, but the Indians defense at the rim and in the paint prevented Sperry from finding momentum on offense.

"They're a really athletic team, so we thought our best chance to was give them perimeter shots and try to close down the paint," said Herrin. "I think our defense did a good job. We hit enough shots offensively to keep them from making a run. We didn't make many shots against Fort Gibson so it was good to see us shoot better tonight."

Tomas Herrera led the Indians with 12 points. Blaine Garner and Levi Williams both finished with eight.

The Indians improve to 17-6 on the season. They move on to face Vian in the first round of Regionals on Thursday, Feb. 21, at Sequoyah at 8 p.m. Vian defeated Westville 60-45 on Friday night to win their district.

The Lady Indians made quick work of the Sperry Lady Pirates, using their 3-point shooting to build an early lead, en route to a 72-21 victory.

Sperry (4-17), playing without their two of their rotation players, never managed to get anything going against the Lady Indians, as Sequoyah jumped out to a 15-0 lead in the first quarter and led 22-5 after the first eight minutes. Larry Callison, Sequoyah head coach, elected to play his bench players for all of the second quarter, as they entered the halftime break with a 31-7 lead.

"We were confident that our bench players could maintain our lead," said Callison. "This might be the deepest team I've ever coached. I'm confident in all of our girls to step on the floor and contribute if needed."

The second half was a similar story for both teams, with junior guard Lana Gass leading the three-point attack with three straight triples in the third quarter. Baylee Davis made four three-pointers in the fourth quarter for the Lady Indians.

The Lady Indians improve to 19-4 on the season, and will move on to face Westville in the first round of regionals at Sequoyah on Thursday, Feb. 21, at 6:30 p.m. Westville defeated Vian 36-30 in their district matchup on Friday.