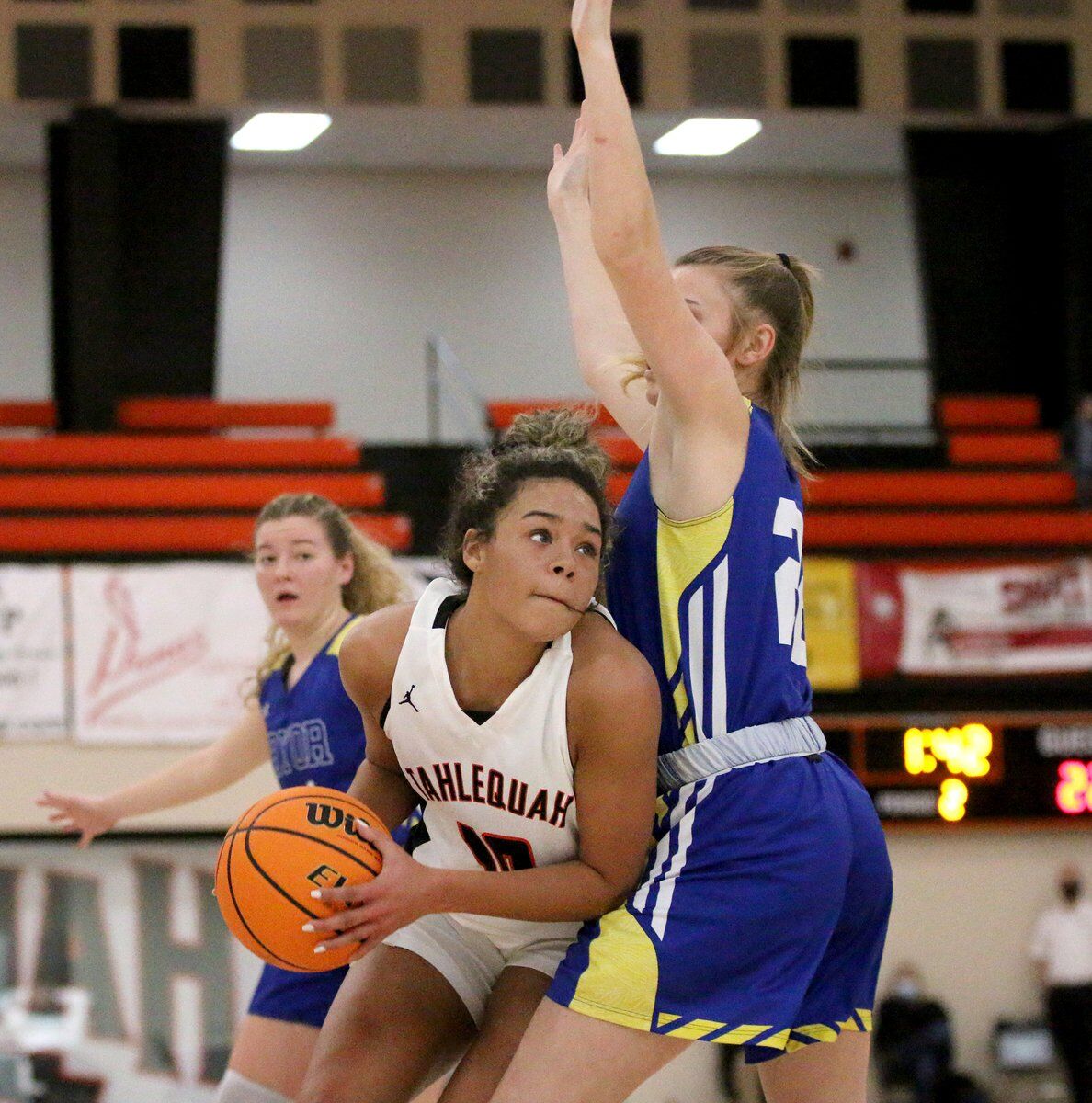 Tahlequah guard Smalls Goudeau works inside during the first half Tuesday against Pryor at the TMAC. Goudeau had seven points and five steals in the Lady Tigers' 61-41 win, the eighth straight for Tahlequah. 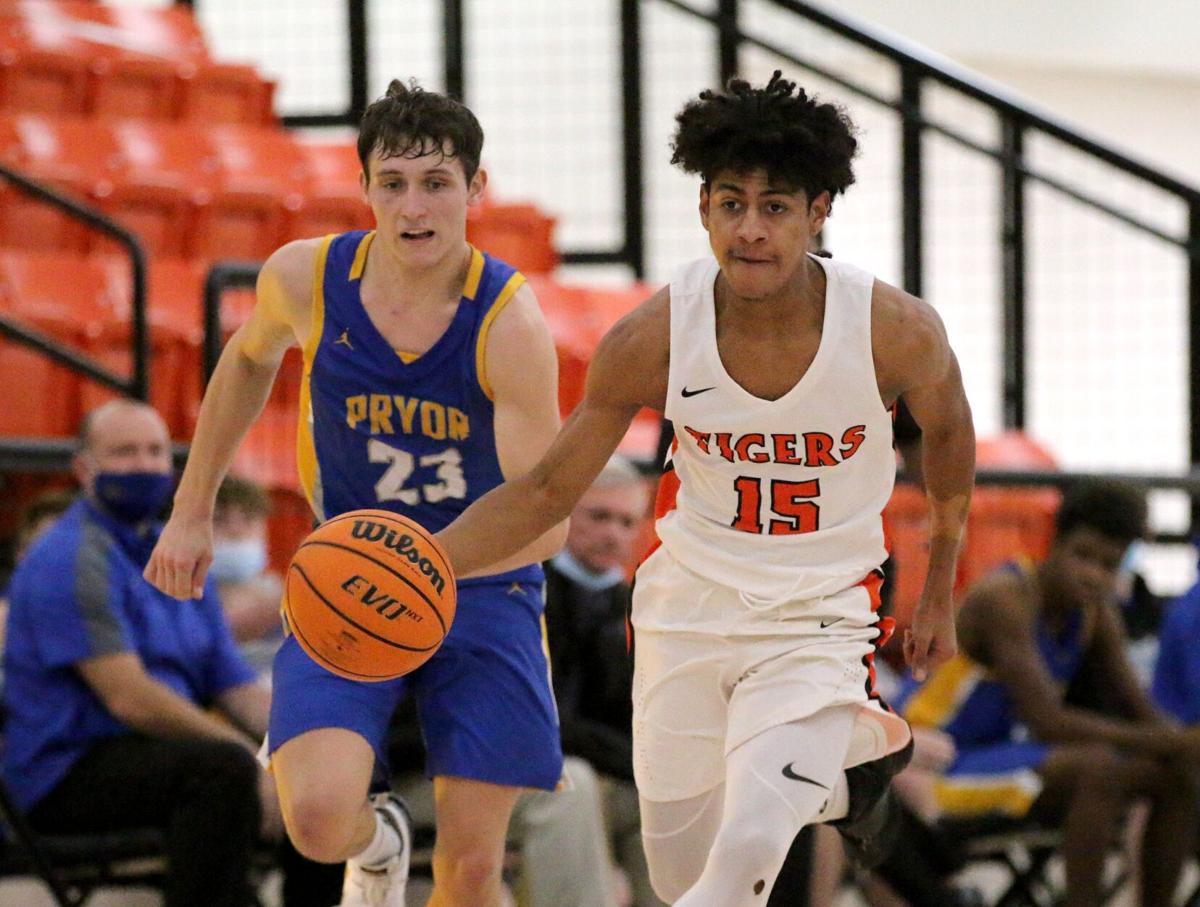 Tahlequah's Tyson Louie brings the ball up the court in transition after a steal during the second half against Pryor Tuesday at the TMAC.

Tahlequah guard Smalls Goudeau works inside during the first half Tuesday against Pryor at the TMAC. Goudeau had seven points and five steals in the Lady Tigers' 61-41 win, the eighth straight for Tahlequah.

Tahlequah's Tyson Louie brings the ball up the court in transition after a steal during the second half against Pryor Tuesday at the TMAC.

Not much has gotten in the way of Tahlequah over the last few weeks.

Pryor stood tall for one half but became another notch in a Lady Tiger win streak that swelled to eight games Tuesday evening at the Tahlequah Multipurpose Activity Center.

Faith Springwater, Kori Rainwater and Lydia McAlvain each scored in double figures to carry the Class 5A second-ranked Lady Tigers to a 61-41 win over No. 10 Pryor.

Tahlequah, who hasn’t lost since falling to 5A top-ranked Sapulpa on Jan. 9 at the Skiatook Tournament, improves to 15-2 overall and stays unbeaten at 8-0 in Metro Lakes Conference play.

The win is the ninth against a ranked opponent and the sixth against an opponent ranked 10th or better.

The Lady Tigers went on a 19-2 run in the third quarter to pull away after Pryor got to within one point after consecutive baskets by Brooklyn Stohler to start the second half.

Pryor led for most of the first half and had a 13-11 edge after one quarter.

“Give [Pryor] credit. They came out and hit shots early and took care of the ball against our press,” Tahlequah head coach David Qualls said. “I thought we finally made that adjustment about halfway through the second quarter with what we needed to do defensively and it carried over into the third quarter.”

Rainwater, who closed with 12 points, scored seven points during the third-quarter run on three baskets inside the paint and added a free throw, and Springwater, who finished with a game-high 14 points, started the surge with a basket and free throw and later knocked down a 3-pointer that gave THS a 38-28 advantage. Point guard Kacey Fishinghawk, Tahlequah’s lone senior, capped the run with a 3 that put the Lady Tigers up 46-28.

The Lady Tigers took the lead for good on a Tatum Havens’ 3-pointer from the left corner at the 4:14 mark of the second quarter. It closed a 7-0 run that also included baskets from Lily Couch and Emily Morrison. Tahlequah took a 27-22 lead into halftime after Springwater scored from the inside with 1:17 remaining.

Springwater has now led Tahlequah in point production over the last two games. The junior forward, who also had 14 points in Tahlequah’s 55-29 road win over 4A No. 8 Grove on Friday, Jan. 29, shot 6 of 9 overall from the floor, pulled down a team-high seven rebounds and added four assists.

“Plays are coming to her and she continues, for the most part, to make the right play,” Qualls said of Springwater. “The last two games we’ve played against zone teams and her bread and butter is right there at the free throw line and elbow area. It’s played down her alley. She did a great job tonight.”

Smalls Goudeau and Couch both came off the bench to score seven points, while Havens followed with six. Goudeau had a team-best five steals, and both McAlvain and Fishinghawk joined Springwater with four assists. McAlvain ended with 10 points.

“The balance continues to be there for us,” Qualls said. “What’s crazy is I think we can still play better as a group. We haven’t peaked yet and I still think we’re a few weeks away from that.”

Pryor, who had its five-game win streak snapped, was paced by Hannah Rhymer’s 12 points. Rhett Looney, who went into the contest averaging a team-high 18 points, was held to five.

“[Rhett] is one of the top scorers in the conference and we held her to five points,” Qualls said. “We did a great job really all night on her. We played really good team defense.”

Pryor, now 11-6 overall and 5-3 in the conference, received eight points apiece from Brooke Miller and Stohler.

“Anytime you beat a team like Pryor that’s in the top 10 it’s definitely a good feeling,” Qualls said.

Tigers can’t get over the hump: Tahlequah made a third-quarter run to cut into a Pryor 10-point lead, but came up short in a 51-40 setback Tuesday at the TMAC.

The loss halts a season-best three-game win streak for the 5A 19th-ranked Tigers, who drop to 8-9 overall and 4-4 in the Metro Lakes Conference.

Down 33-23 with 4:21 left in the third quarter, Tahlequah went on an 11-2 run to narrow Pryor’s lead to 35-34. Sophomore forward Hayden Smith, who led the Tigers with 15 points, started it with a basket and free throw, and senior Hayden Wagers added a score from inside and a 3-pointer. Senior guard Trey Young also had a field goal during the run.

Wagers started the scoring in the fourth with a basket following a Pryor turnover to get THS to within 37-36, but Pryor answered with an 8-0 run to take control.

“We had shots in the air to either tie the game or go ahead a couple of times,” Tahlequah head coach Marcus Klingsick said. “When you’re down nine at halftime that’s about all you can ask. I still thought we were gonna find a way. We had the momentum going our way.

“We never really did shoot the ball well all night, and that hurt us even when we were in our press and got some good things.”

Pryor, who has now won its last six games, also received 15 points from Nik Jordan and 10 from Josh Gore. The Tigers led from start to finish, opening the contest with five consecutive points. They twice led by 10 points in the second quarter, both after baskets by Alt.