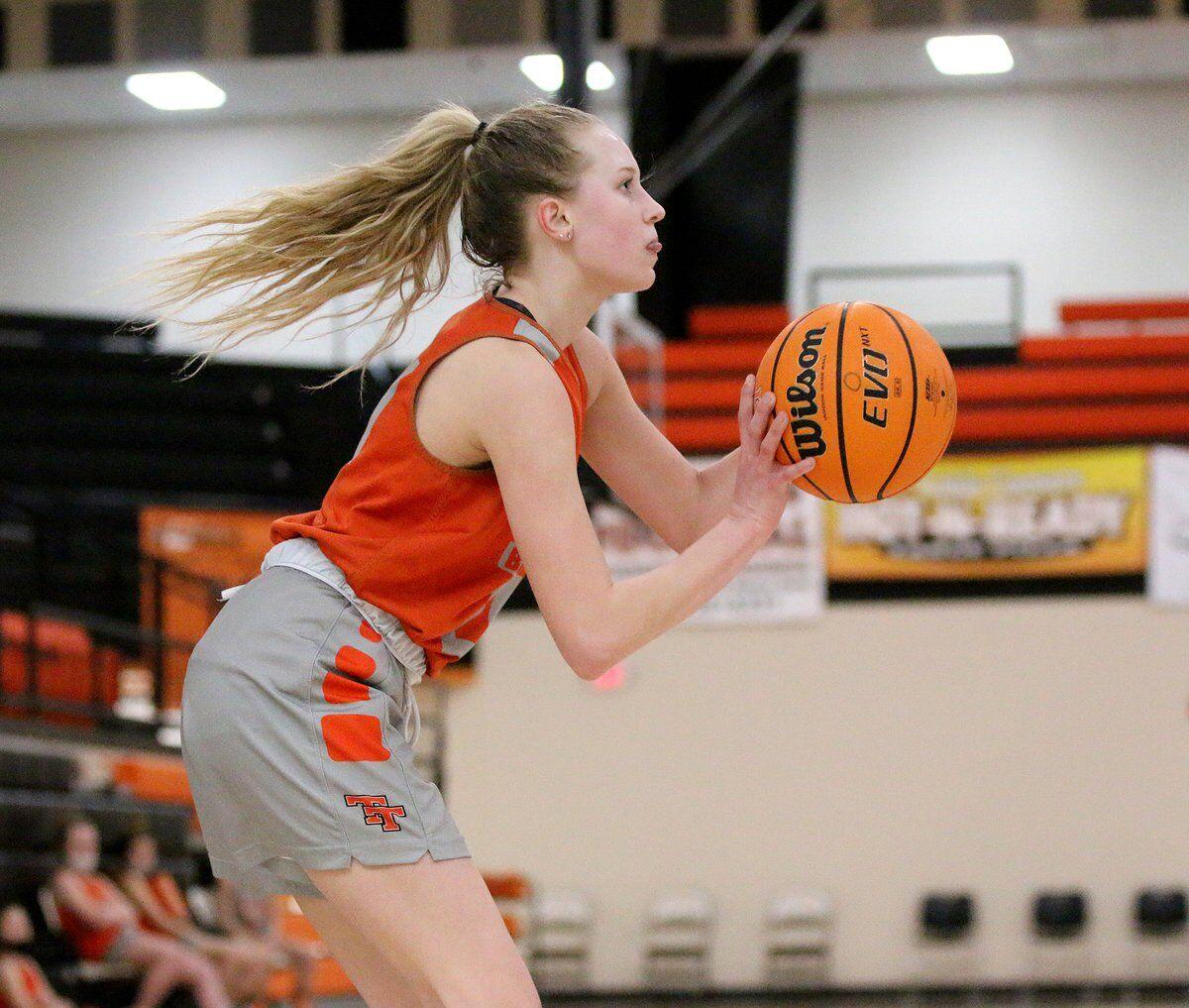 Tahlequah junior Tatum Havens sets to shoot a 3-pointer Tuesday during practice at the TMAC. The Lady Tigers play Carl Albert at 6 p.m. Thursday in Tulsa on the opening day of the Class 5A State Tournament. 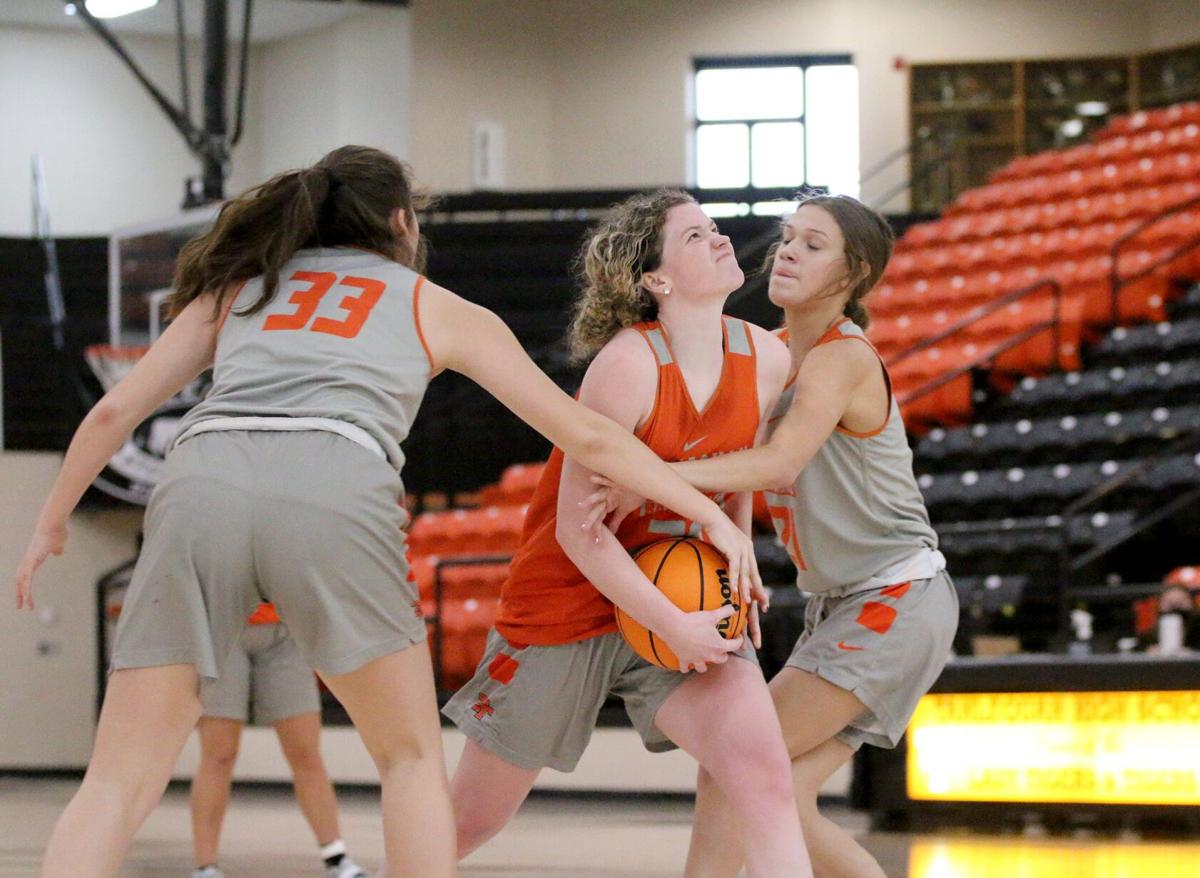 Faith Springwater tries to get past defenders Jadyn Buttery and Kori Rainwater (33) during practice Tuesday.

Tahlequah junior Tatum Havens sets to shoot a 3-pointer Tuesday during practice at the TMAC. The Lady Tigers play Carl Albert at 6 p.m. Thursday in Tulsa on the opening day of the Class 5A State Tournament.

Faith Springwater tries to get past defenders Jadyn Buttery and Kori Rainwater (33) during practice Tuesday.

Tahlequah will go into the Class 5A State Tournament with a full head of steam.

There are regional and area tournament titles.

They’ve won 91.3 percent of the time, boasting a 21-2 overall record under head coach David Qualls, who has guided the program to four state tournament appearances in the last five years. They’re 13-2 against ranked teams, nine of those wins coming against teams ranked in the top 10.

Next in line is Carl Albert Thursday in a 6 p.m. tipoff at Tulsa Memorial High School.

Tahlequah is familiar with the Lady Titans, who return a majority of their roster from last season when the Lady Tigers defeated them, 55-34, in an area tournament championship game.

“You want to stay true to your identity, and with the way we’ve played lately, we don’t want to get caught into anybody elses style of play,” Qualls said Tuesday following practice. “Obviously Carl Albert is going to play five guards and they’re going to press the entire game. They want to make it a track meet. We have to do a good job of knowing when they’re trying to speed us up and just take control of the game, whether it’s break press and run a little bit of offense, or whether it’s take the ball to the basket.

“It helps playing them last year because you can go back and see what worked and what didn’t against their style of play. We attacked pressure really well last year. We got down hill and made them foul us in the paint and got to the free throw line quite a bit.”

Tahlequah has five different players averaging eight points or better, paced by Smalls Goudeau’s 9.9 points. The junior guard, who had a season-high 17 points against El Reno in the area tournament championship game, is also averaging 2.7 steals, 3.2 rebounds and 2.7 assists in 13 games. She’s been a perfect fit since joining the team midseason after transferring from Sequoyah.

“They’ve been accepting since the beginning,” Goudeau said of her teammates. “It was really easy for me to make the transition.”

Goudeau is one of two Tahlequah players to have state tournament experience. She was a freshman on the Lady Indians’ semifinal team in 2018-19 and was a big part of Sequoyah’s run to another state tournament last season.

“Going into state, I’d say don’t be overwhelmed because I was in my freshman year,” Goudeau said. “We just have to calm down, get the nerves out and go play. It’s all about having fun, really.”

Tahlequah’s lone senior, point guard Kacey Fishinghawk, is coming off one of her best performances of the season in the area title game against El Reno. She buried five 3-pointers and had a team-high 19 points in the Lady Tigers’ 73-59 victory.

Averaging 8.8 points and leading the team in 3-pointers made (44) and overall shooting percentage (50.4), Fishinghawk was the most bitter after having to sit out last year’s state tournament due to COVID-19, according to Qualls.

“I think the only thing I would say to this group before the game would be what coach says,” Fishinghawk said. “We’re a special group this year and I feel like it’s our year. I feel like we can go down in history as the team that won it all.”

Junior forward Faith Springwater’s outing against Carl Albert last season was the least memorable as she left the contest early with an ankle injury. Springwater, who has also missed two of Tahlequah’s playoff games this year with a foot injury, is averaging 8.1 points and 4.1 rebounds. She’s excited to get another opportunity against the Lady Titans.

“It means a lot. Going down on my foot [last year] was obviously not the best thing, and then going down again recently, but this time I’m ready to go, and ready to go play [Carl Albert] again and get a full game,” Springwater said. “But I’m also ready as a team for us to go and dominate, hopefully.”

Junior forward Tatum Havens, another addition via transfer for Tahlequah after moving in from Ada, is averaging 9.4 points and has knocked down 34 3-pointers. Havens is averaging 4.1 rebounds.

The Lady Tigers will try to reach the semifinals for the second time under Qualls. With a win Thursday, they would take on the Piedmont/Bishop McGuinness winner at 6 p.m. Friday.

“We’ve got to dominate the glass and get to the basket,” Springwater said. “They’re going to shoot a lot of 3s, so we’ve got to run them off the line or at least contest their shots. I think the biggest thing is to control the glass.”

“Taking care of the ball and making free throws will be important for us,” Fishinghawk said.

“We have to play our game and not play into their fast pace and try to rush things,” Goudeau said.

Thursday’s other two quarterfinal round games include top-seeded and top-ranked Sapulpa taking on Shawnee in the opener at 2 p.m., and Lawton MacArthur facing El Reno at 4 p.m.

Semifinal round games will also be played at Tulsa Memorial, and Saturday’s championship game will take place at the Mabee Center in Tulsa at 5:30 p.m.