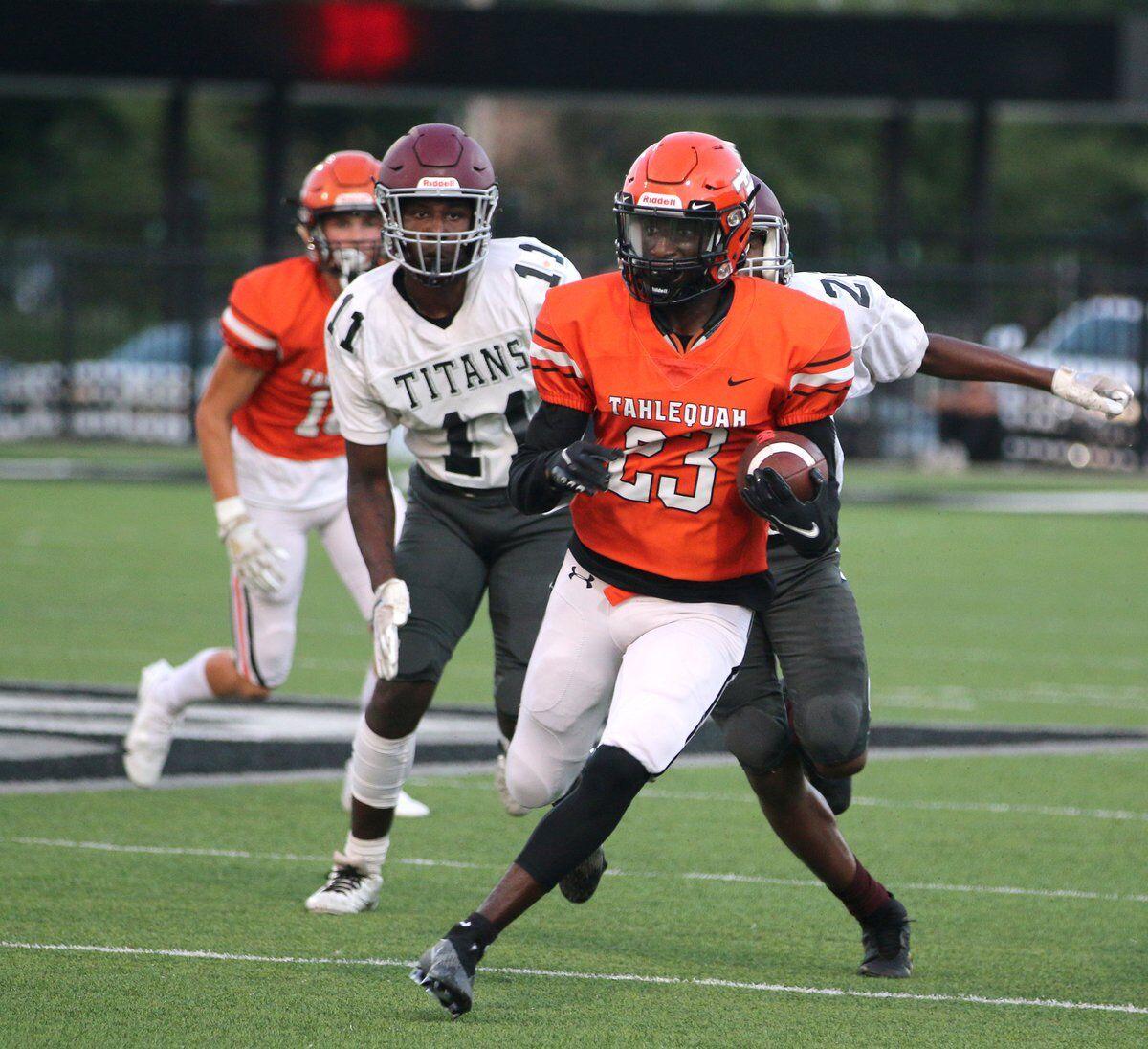 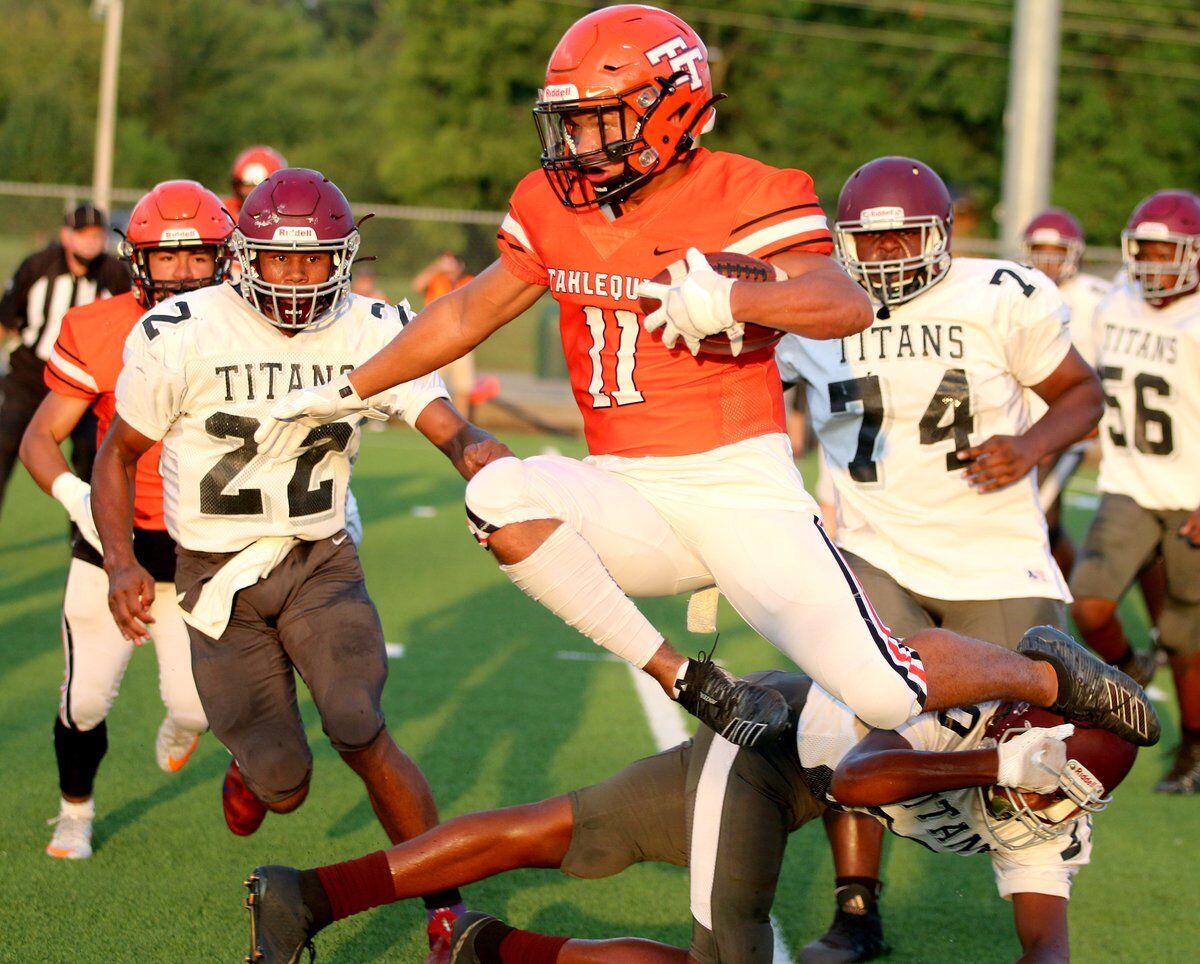 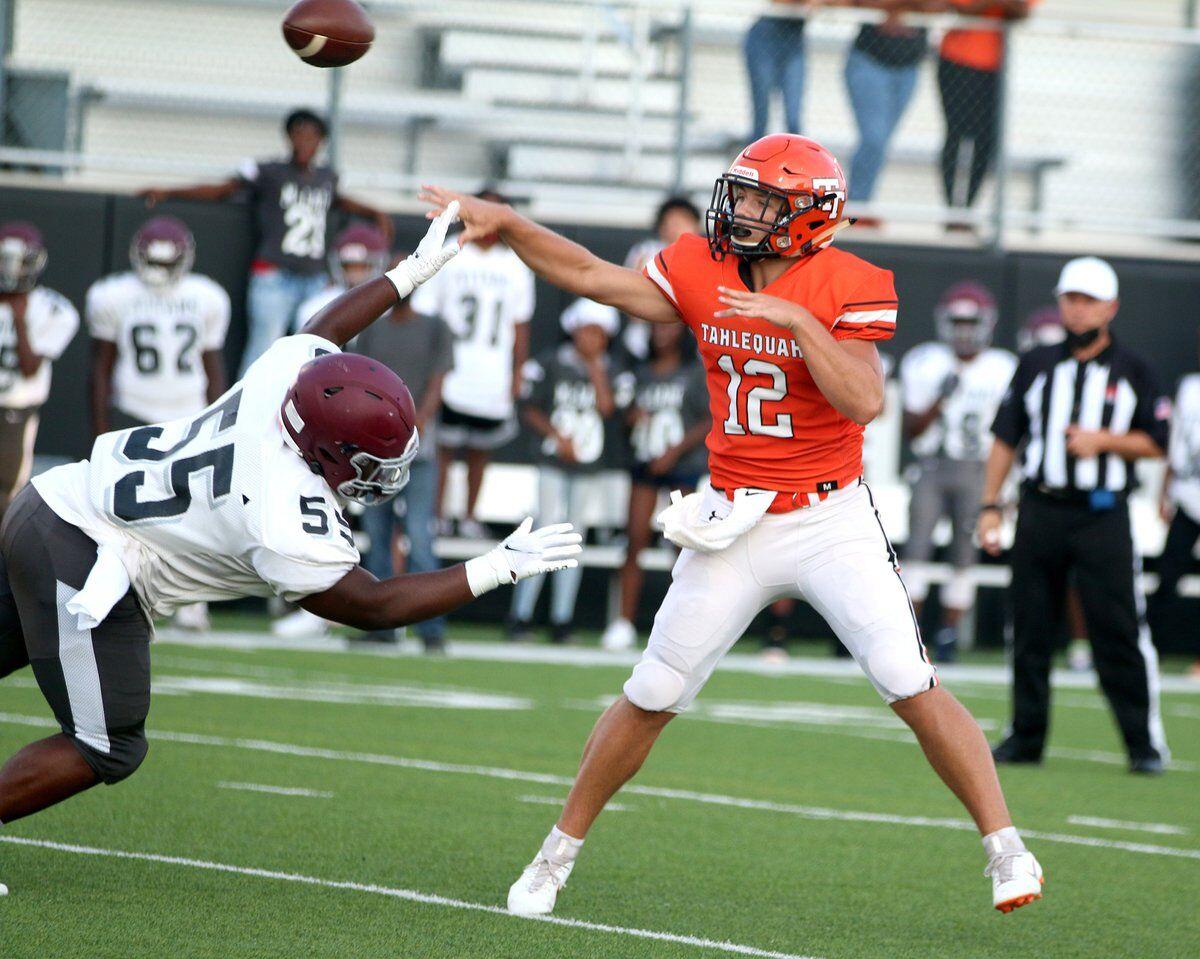 Tahlequah junior quarterback Tyler Joice avoids pressure to get a pass off against McLain Friday at Doc Wadley Stadium.

Tahlequah junior quarterback Tyler Joice avoids pressure to get a pass off against McLain Friday at Doc Wadley Stadium.

There was a lot of sloppiness for Tahlequah in its season opener Friday against Tulsa McLain at Doc Wadley Stadium, but the Tigers were good enough to walk away with a 27-2 victory.

The win is the 10th consecutive in non-district games for Tahlequah, who last suffered a loss to Sallisaw in 2016.

Tahlequah then struggled to stay on course on the offensive side for the remainder of the game. The Tigers, who finished with 214 total yards, committed three turnovers, had a pair of botched snaps and committed numerous penalties.

It was a different story on defense. The Tigers didn't allow any points and held the Titans to just 131 total yards of offense. McLain's only points came after a bad snap that forced Joice to fall on the football in the end zone for a safety in the second quarter.

"There were a lot of mistakes, especially on the offensive side of the ball," Tahlequah head coach Brad Gilbert said. "Defensively, we played really well and shut them out. You've got to compliment the defense in how they came how, and there's a lot of new faces out there too.

"We're not very good on offense right now, we're just not. They came out and executed really well in that first drive, but it just seemed like with one mistake it was an avalanche at times. It shows with the inexperience and no leadership, especially at the quarterback position right now."

Tahlequah took a 14-2 lead right before halftime on a Kobey Baker 19-yard TD with 27 seconds showing on the clock.

The Tigers extended their lead to 20-2 at the mark of the third quarter when Joice connected with senior receiver Tanner Christian for a 13-yard touchdown.

The final points came on a 26-yard scoring run by junior running back Malik McMurtrey during the fourth quarter. McMurtrey finished with a game-high 135 rushing yards on 26 carries.

Joice completed 10 of 18 passes for 75 yards with a touchdown and interception. Christian led all receivers with four receptions for 24 yards, while Baker had three catches for 19 yards. Baker also added 27 rushing yards on four carries.

"We've got a lot of good things that we did and we can build from those, but there were just too many key mistakes that kept us from absolutely dominating the game," Baker said. "We've got to work on things."

The Tahlequah defense forced five turnovers and limited McLain to 2.4 yards per carry. Shaw Thornton and Qua'shon Leathers both had interceptions, and the Tigers forced and recovered three fumbles.

"Our defense held them in check all night long," Gilbert said. "We were able to get pressure on their quarterback, and the defensive staff came up with a great scheme. Kids made plays. There were a lot of guys getting to the football, which we really like, and they created turnovers, too. Defensively, saw a lot of good things, especially from the key guys like Angel Quezada, Qua'shon, Kobey Baker, Shaw Thornton, Carson Ferguson...those guys are seniors that have been out there and have played at a high level."

The competition gets much stiffer next week when the Tigers travel to Class 4A top-ranked Wagoner. The Bulldogs blanked Coweta, 28-0, in their season opener Friday.

"We were sloppy and we've got to go watch film and fix some things," Leathers said. "Next week we've got a big game against Wagoner. We've just got to fix a lot of things so we can be great."

"There's obviously going to be some things that we like and things we can build on, but we've got to get a lot better offensively," Gilbert said. "It was great to get that first victory of the year here in front of the home fans, and it's always good to be 1-0 instead of 0-1, so I'm not going to complain about that. We've got a lot of work to do."