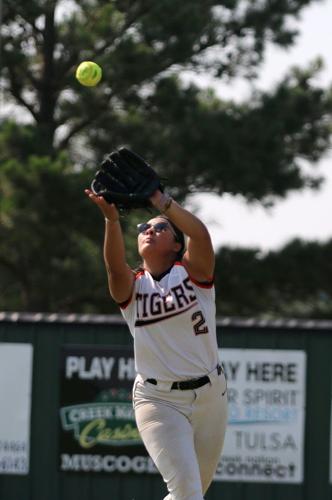 Tahlequah sophomore right fielder Jordan Bread gets under a flyball during the first inning against Stilwell Thursday in Tahlequah. 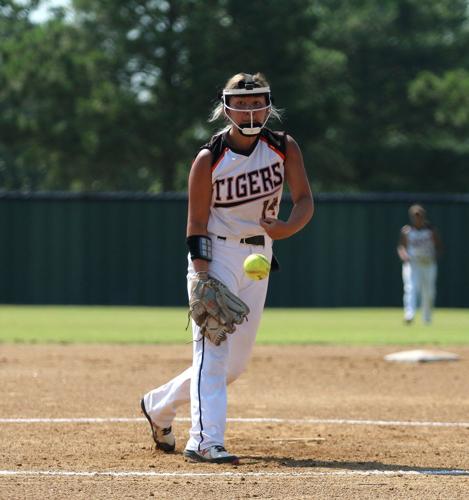 Tahlequah sophomore right fielder Jordan Bread gets under a flyball during the first inning against Stilwell Thursday in Tahlequah.

Junior infielder/catcher Jadyn Buttery had two hits and drove in a team-high four runs to pace the Lady Tigers, who moved to 8-2-1 under head coach Chris Ray.

Tahlequah hasn’t had a loss since dropping its first two games of the summer against Howe and Caddo. The Lady Tigers defeated both Muskogee and Pocola Wednesday in their first home games, and won four straight games against Lookeba-Sickels, Okemah, North Roth Creek and Rattan after their two losses. They also defeated Stilwell and tied with Dale.

In Thursday’s contest, Paisley Qualls and Jayley Ray joined Buttery with two hits apiece. Qualls, who started at first base, is coming back from a knee injury that caused her to miss much of last season. Ray is one of just two seniors on this year’s roster, along with pitcher/outfielder Mikah Vann.

The Lady Tigers scored two runs in the opening frame, added five more in the third inning, scored once in the fourth, and closed with a three-run eighth in what was a scheduled two-hour contest. Riley Dotson, Tara Dye, Cadence Kirk and Loren Walker each finished with one hit.

Vann and Dotson, a freshman, each saw time in the pitcher’s circle. Vann threw five innings, and Dotson pitched in the final three. They combined for 10 strikeouts and issued three walks in the shutout.

“Our pitching and defense were quite good today, absent two plays,” Ray said. “Our pitchers did an outstanding job of keeping the Stilwell batters off balance all day today.”

“Offensively, we barreled the ball up in this game,” Ray said. “We were 10 for 16 from the plate with three doubles and a triple. Defensively, we made the routine plays.”

Against Muskogee on Wednesday, Kori Rainwater hit an inside-the-park home run to left field to lead off the fifth inning and carried the Lady Tigers to a 5-4 victory. Retzloff had two hits to pace the lineup, and Qualls led the way with a pair of RBIs. Dotson earned the win in the pitcher’s circle. She gave up four runs on six hits, recorded four strikeouts and issued two walks.

“The ladies have been steadily progressing each game,” Ray said. “Since day one of the Red Oak Summer Slam, we have seen consistent improvement both offensively and defensively, and in the circle.”

The Lady Tigers will close summer league play Monday when they host Muskogee at 10 a.m.