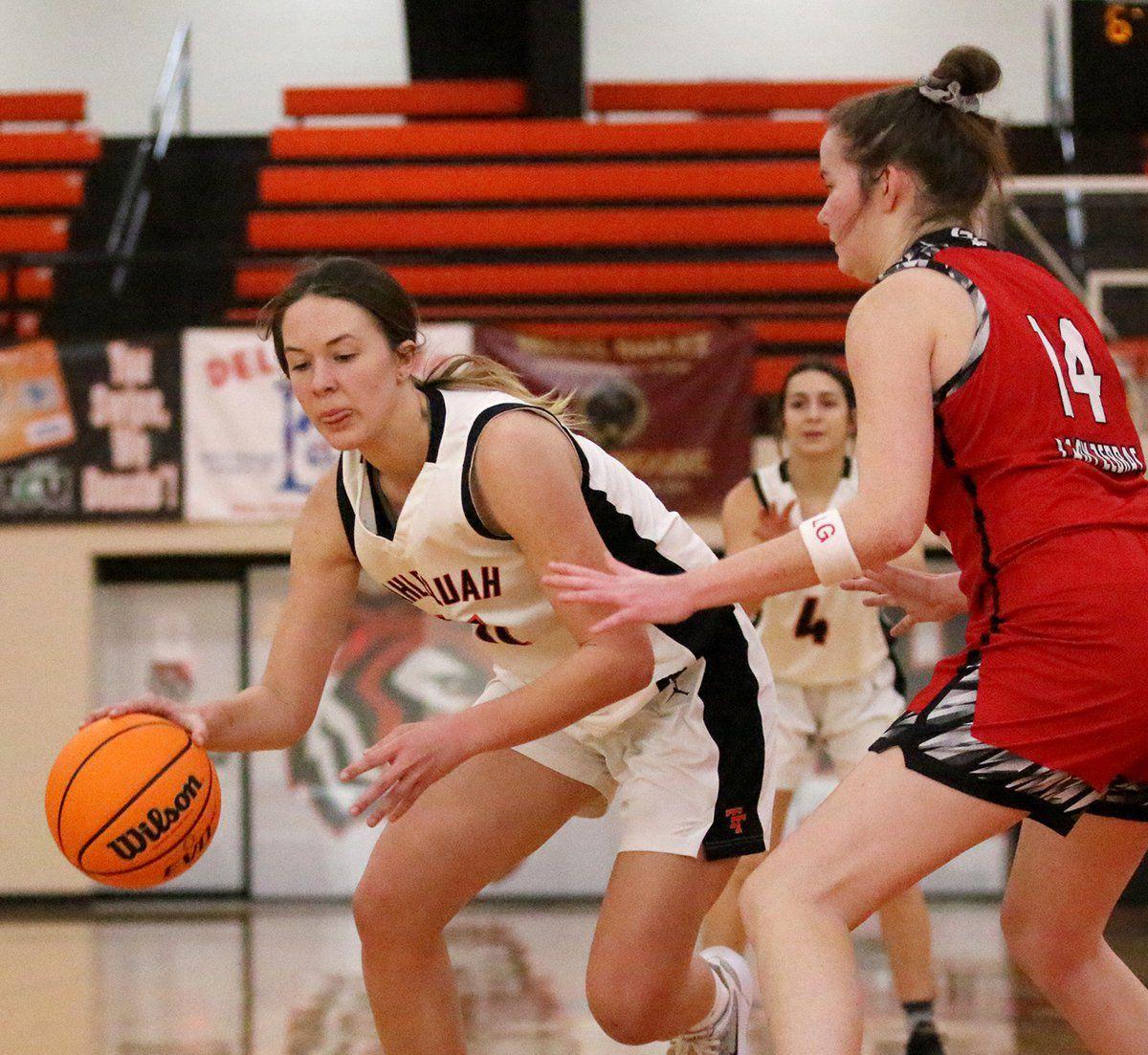 Tahlequah senior forward Kloe Bowin had a team-high nine points in the Lady Tigers' 31-29 loss to Claremore Friday at the TMAC. 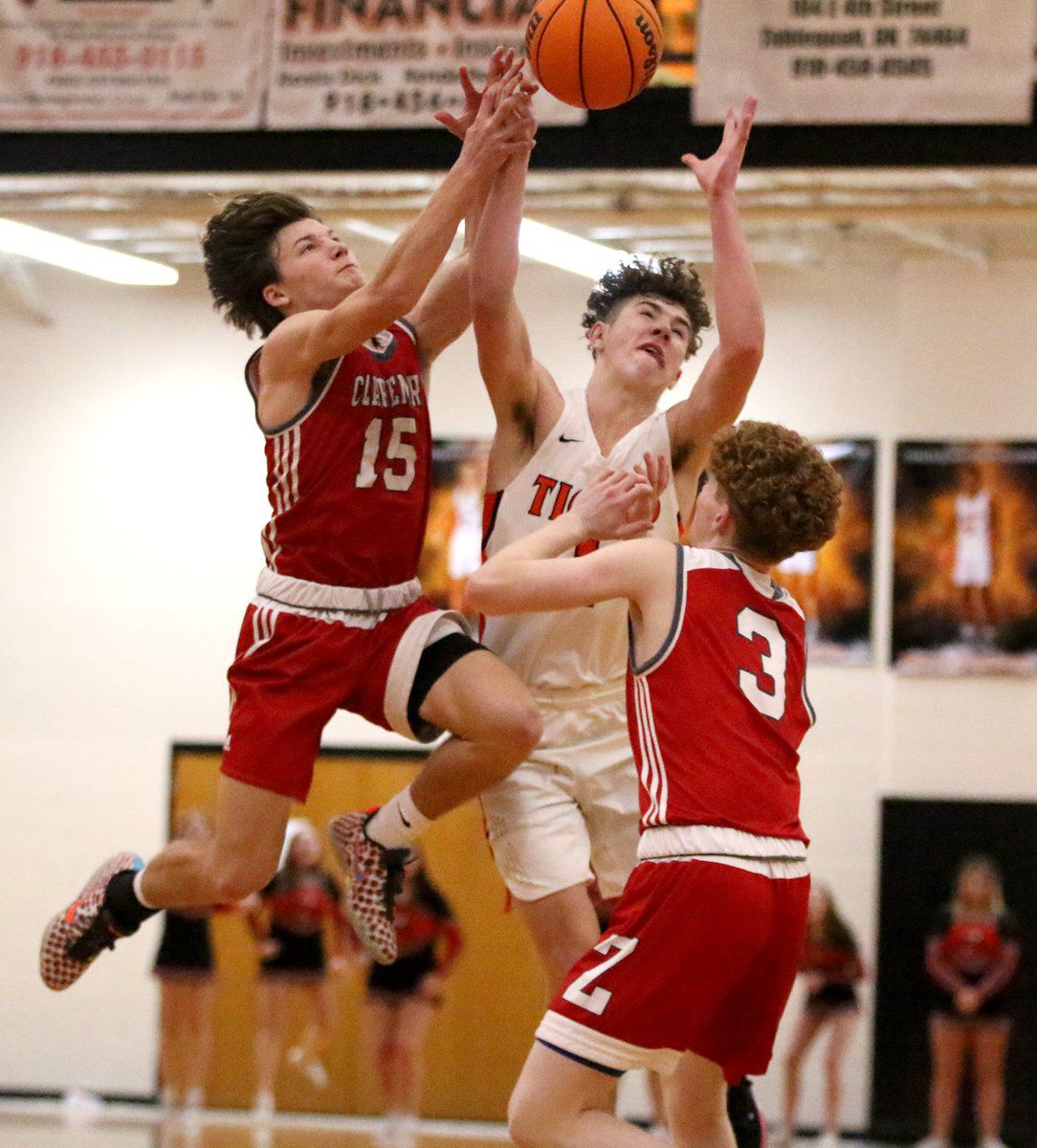 Tahlequah's Jaxon Jones battles with Claremore's Noah Smallwood (15) and Michael Anderson (3) during the game's final possession in overtime Friday night at the TMAC. Jones picked up a loose ball and buried a 3-pointer at the buzzer to lift the Tigers to a 57-55 win.

Tahlequah senior forward Kloe Bowin had a team-high nine points in the Lady Tigers' 31-29 loss to Claremore Friday at the TMAC.

Tahlequah's Jaxon Jones battles with Claremore's Noah Smallwood (15) and Michael Anderson (3) during the game's final possession in overtime Friday night at the TMAC. Jones picked up a loose ball and buried a 3-pointer at the buzzer to lift the Tigers to a 57-55 win.

Jaxon Jones buried a fall-away 3-pointer from the left corner just before the sound of the buzzer and lifted Tahlequah to a thrilling 57-55 overtime win over Claremore Friday night at the Tahlequah Multipurpose Activity Center.

The win puts the Class 5A No. 10 Tigers at 13-8 overall and 8-4 in the Metro Lakes Conference with just two regular season games remaining. It also ends a two-game losing streak and a stretch of four losses over their previous five games.

"We actually had something different [set up] and when we passed the ball it was deflected, so it kind of became a loose-ball scramble and Jaxon came up with it and hit a tough shot," Tahlequah head coach Duane Jones said of the last play. "It was a big shot."

Tahlequah led for nearly the entire second half but couldn't put the Zebras away. Claremore knocked down five of its six 3s in the second half, and Caison Hartloff

scored from the inside with 37 seconds remaining to tie the score at 50-50 and send the gave into overtime.

"Claremore has always been a team that shoots the ball well," Duane Jones said. "The Hartloff kid and [Drake Roark] hit some deep, deep 3s that just kept them in the game. We missed a few free throws that gave them the chance to hang around, then we found ourselves down in overtime, but we made some plays and got a big shot at the end."

Claremore's only lead of the second half came after a 3-pointer from the right wing by Michael Anderson that made it 48-47 with 1:26 left.

Jones countered with a 3 of his own from the right wing at the 1:02 mark to put the Tigers up 50-48 before Hartloff's basket.

In overtime, the Zebras never trailed until Jones' heroic shot. They led 55-52 after a Anderson trey with 2:43 remaining before Tyler Joice came away with a steal and layup to get THS to within 55-54 with 1:22 showing on the clock.

Jones finished with a game-high 22 points and had five makes from 3-point land. The senior guard and Northeastern State signee was also a perfect 5 for 5 from the free throw line.

The Tigers led by as many as 12 points in the third quarter after Kooper McAlvain buried a trey to make it 35-23 with just under a minute left.

Claremore then went on a 9-2 run to slice Tahlequah's lead to 37-32 following a 3-pointer from Hartloff. The Zebras narrowed the margin to 38-36 on a basket by Jace Schaffitzel, but the Tigers went back up 41-36 on a basket and free throw by Tanner Christian with 5:09 remaining.

"We're seeing a lot of junk defenses with Jaxon and we're really getting better against it every game because we're figuring out different ways to score and get other guys some easy buckets," Duane Jones said. "It's good for us with the playoffs coming."

Hayden Wagers joined Jones in double figures with 14 points, nine of those coming in the first half. Christian closed with eight points, and Joice ended with four.

"Tanner and Hayden both had big games for us, and Kooper, in his first game back from injury, came in and played solid and hit a big 3," Duane Jones said.

"It was just good for us to get a good win because we haven't shot the ball great lately. I felt like our defense kept us right there all night long and that's what we've talked about it that our defense has to be there no matter whether shots are going down or not."

Claremore, who slips to 5-14 overall and 3-9 in conference play, received 21 points from Hartloff, and Anderson followed with 12.

The Tigers will close regular season play next week with consecutive home games against Glenpool (Tuesday) and Pryor (Friday). They will then begin the playoffs in a 5A Regional Tournament at Collinsville against Skiatook on Friday, Feb. 28.

Woeful shooting costs Lady Tigers: Tahlequah shot just 20.9 percent overall and connected on only 5 of 26 from behind the 3-point arc in a 31-29 setback to Claremore Friday night at the TMAC.

The 5A No. 5 Lady Tigers, who fall to 14-7 overall and 8-4 in the Metro Lakes Conference under head coach David Qualls, led by as many as six points in the final quarter, but struggled to find the basket. They didn't have a single field goal over the final nine-plus minutes.

"The problem was just shooting the ball," Qualls said. "We had only three turnovers, so that wasn't an issue like it's been. We got shots, we just couldn't convert. We didn't get a bucket in the fourth quarter and that was pretty big."

Tahlequah led 28-22 with 6:35 remaining after a pair of free throws by senior forward Kloe Bowin, but the Lady Zebras responded with the next seven points to take a one-point lead at 29-28 with 2:43 left. Claremore was sparked by a 3-pointer from Maddie Heradage and a basket by Grant.

The Lady Tigers got even at 29-29 on a free throw by Kynli Heist at the 2:22 mark, but Claremore took the lead for good after Grant went 2 for 4 from the foul line over the final 1:50.

"Defensively I thought we were pretty solid all night," Qualls said. "We did a pretty good job of limiting their best scorer (Hailey Grant). She's been on a tear, she's been scoring around 24 a game in her last seven. She's a good player and she was the focus. Holding them to 31 points isn't bad at all, so defensive effort was there."

The Lady Tigers were paced by Bowin's nine points. Sophomore Faith Springwater followed with seven points, and sophomore guard Lydia McAlvain finished with six on a pair of 3s.

Tahlequah will conclude regular season play next week with home games against Glenpool and Pryor before hosting a 5A Regional Tournament for the fourth straight year. The Lady Tigers will face Glenpool on Thursday, Feb. 27. McAlester will take on Claremore in the regional opener.