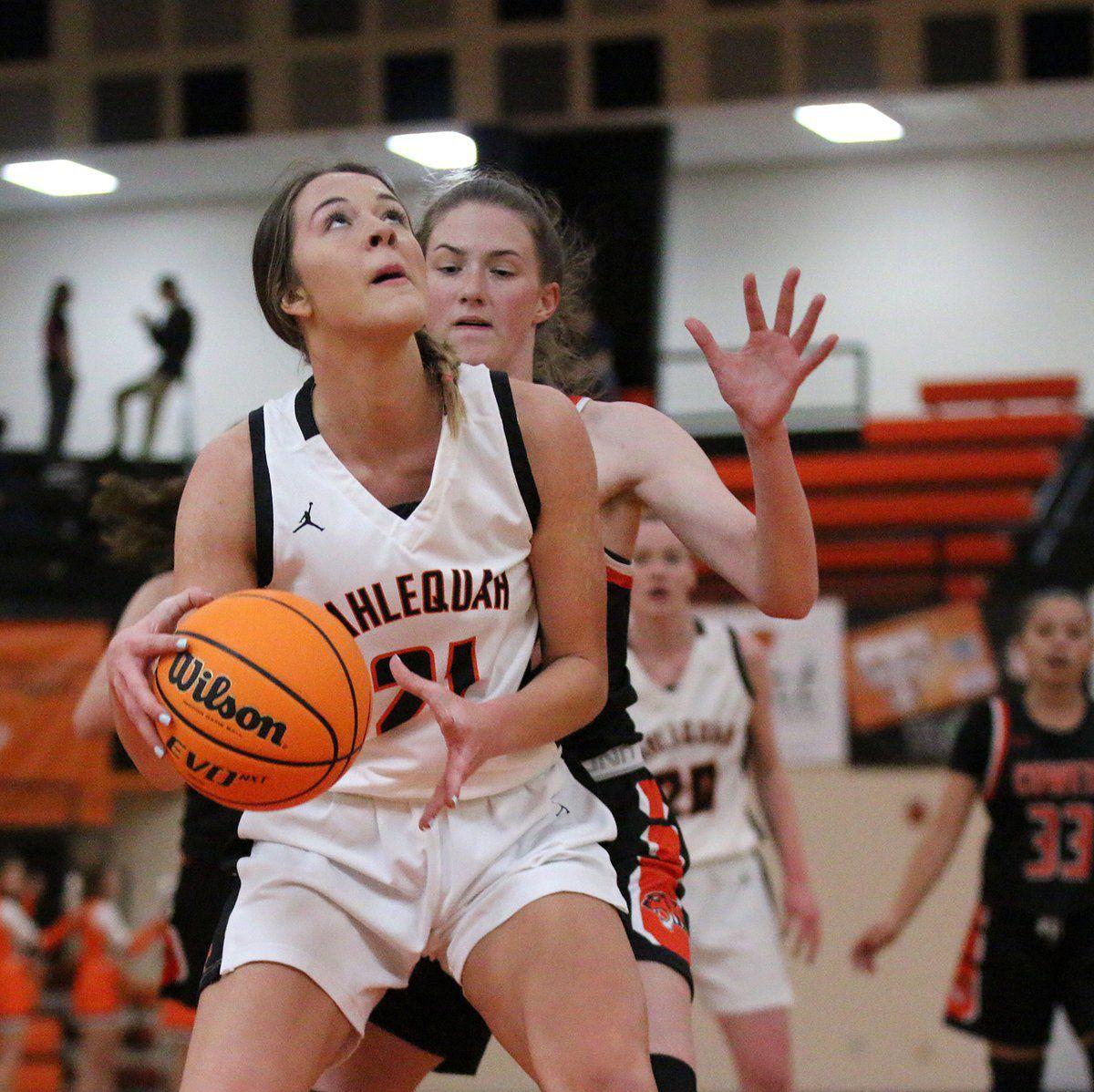 Tahlequah senior forward Kloe Bowin had 14 points in the Lady Tigers' 60-39 win over Coweta Tuesday at the TMAC. 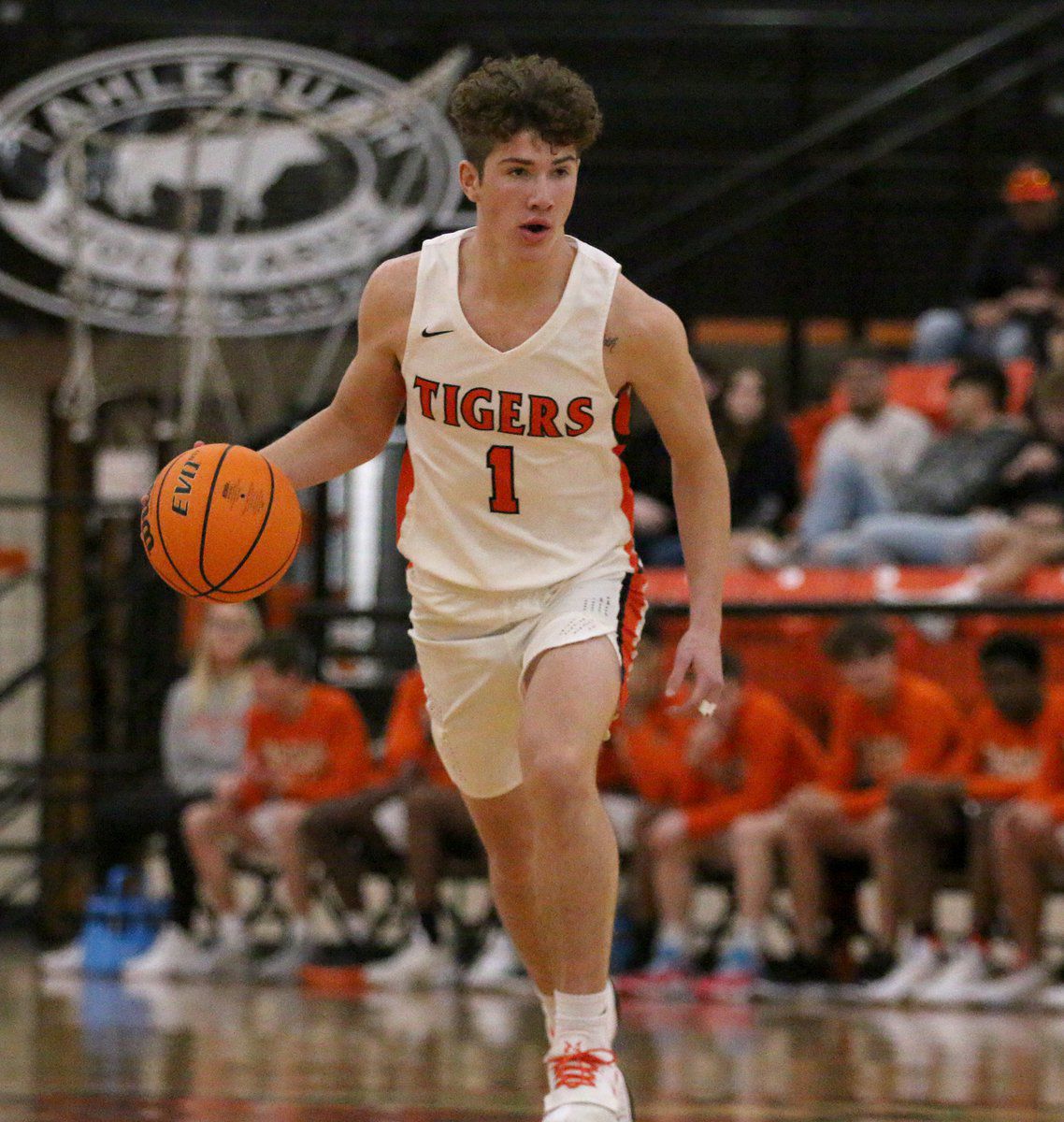 Tahlequah senior guard Jaxon Jones scored a game-high 20 points in the Tigers' 65-53 win over Coweta Tuesday at the TMAC. Jones also went over 1,000 points for his career.

Tahlequah senior forward Kloe Bowin had 14 points in the Lady Tigers' 60-39 win over Coweta Tuesday at the TMAC.

Tahlequah senior guard Jaxon Jones scored a game-high 20 points in the Tigers' 65-53 win over Coweta Tuesday at the TMAC. Jones also went over 1,000 points for his career.

Jaxon Jones reached a milestone and played a big role for Tahlequah Tuesday night against Coweta at the Tahlequah Multipurpose Activity Center.

Jones scored a game-high 20 points, went over 1,000 points for his career, and helped lift the Class 5A No. 13 Tigers to a 65-53 Metro Lakes Conference win over 12th-ranked Coweta in their first game back from the holiday break.

The win is the second straight for Tahlequah, who improves to 5-2 overall and 4-0 in conference play under head coach Duane Jones. The Tigers closed play in December with a 38-35 road win over No. 14 Pryor.

Jaxon Jones gave Tahlequah the lead for good at 16-14 after knocking down a 3-pointer from the left wing with six seconds left in the first quarter. Jones scored nine of his points in the opening eight minutes. His other three field goals came on pull-up jumpers.

But the biggest moment for the senior guard came at the start of the second half when he pulled up and buried a jumper to put him at the magical mark.

“It was pretty special,” said his father, Duane Jones. “I knew he was pretty close to it and I knew he had a good first half. It was good to hear over the loudspeaker that he did it and it’s a great accomplishment for him because he puts in so much time in the gym shooting. I’m really proud of him.”

“We thought we played real solid in just about every area,” Duane Jones said. “They match up with us really well. We talked about our big guys needing to play as well or better than their big guys, and our guards needed to do the same, and we did that stuff. I was real proud of our defensive effort and they ran a half-court trap on us and I thought we attacked it real well.

“We played 11 guys and everybody played really solid. That’s going to big for us going into the future because we’ve got four games in the next seven days after tonight. If we can play 10 or 11 guys and keep guys fresh it’s going to help us out in the long run.”

The Tigers went up by as many as 21 points in the third quarter after Joice converted a free throw to make it 46-25.

Coweta, who falls to 4-3 overall and 3-1 in the conference, fought back and closed the gap to eight points (55-47) following an inside scored from Tryston Doherty with 2:42 left in the contest, but never got closer. The Tigers went on a 10-0 run that started in the closing minute of the third and carried over into the first two minutes of the fourth.

Jaxon Jones ended Coweta’s run with his second 3-pointer and final points that increased Tahlequah’s lead to 53-40 with 5:56 remaining.

Tahlequah will next play in the Bethany Basketball Classic on Thursday against Oklahoma City Casady in a 2:30 p.m. tipoff. The tournament concludes on Saturday.

Lady Tigers cruise past Coweta: Tahlequah put together its most complete performance of the season and routed Coweta, 60-39, Tuesday at the TMAC.

The Class 5A No. 12 Lady Tigers, now 5-2 overall and 3-1 in the Metro Lakes Conference, received double-figure scoring from three different players, canned 10 3-pointers, and had their way inside the paint.

“This is probably our biggest win of the year,” said Tahlequah head coach David Qualls. “Just the way we played. We played really clean, did a really good job on defense, stuck to the game plan, and offensively, I think we showed potential of what we can be when we’re clicking on all cylinders.”

Five of Tahlequah’s 3s came during the opening eight minutes as the Lady Tigers built a 19-9 advantage. Fishinghawk had three of her treys in the first, while Springwater and Lydia McAlvain each added one 3.

“Kacey got us going in the first quarter,” Qualls said. “She did a great job. We’ve talked about she’s our best shooter and we were just waiting on a game like this from her. Hopefully she breaks out and has a good rest of the season. The three 3s in the first quarter and helping us get up by 10 was huge.”

Springwater took charge in the second half where she scored 13 of her points and helped Tahlequah extend its lead to 43-28 after an inside score with 21 seconds left in the third. She also gave THS what would be its largest lead at 53-30 on a 3-pointer with 4:45 left in the contest.

Bowin scored eight of her points over the final 16 minutes.

The win is the fourth straight for Tahlequah, who will take on Bethany at 1 p.m. Thursday in the Bethany Basketball Classic.