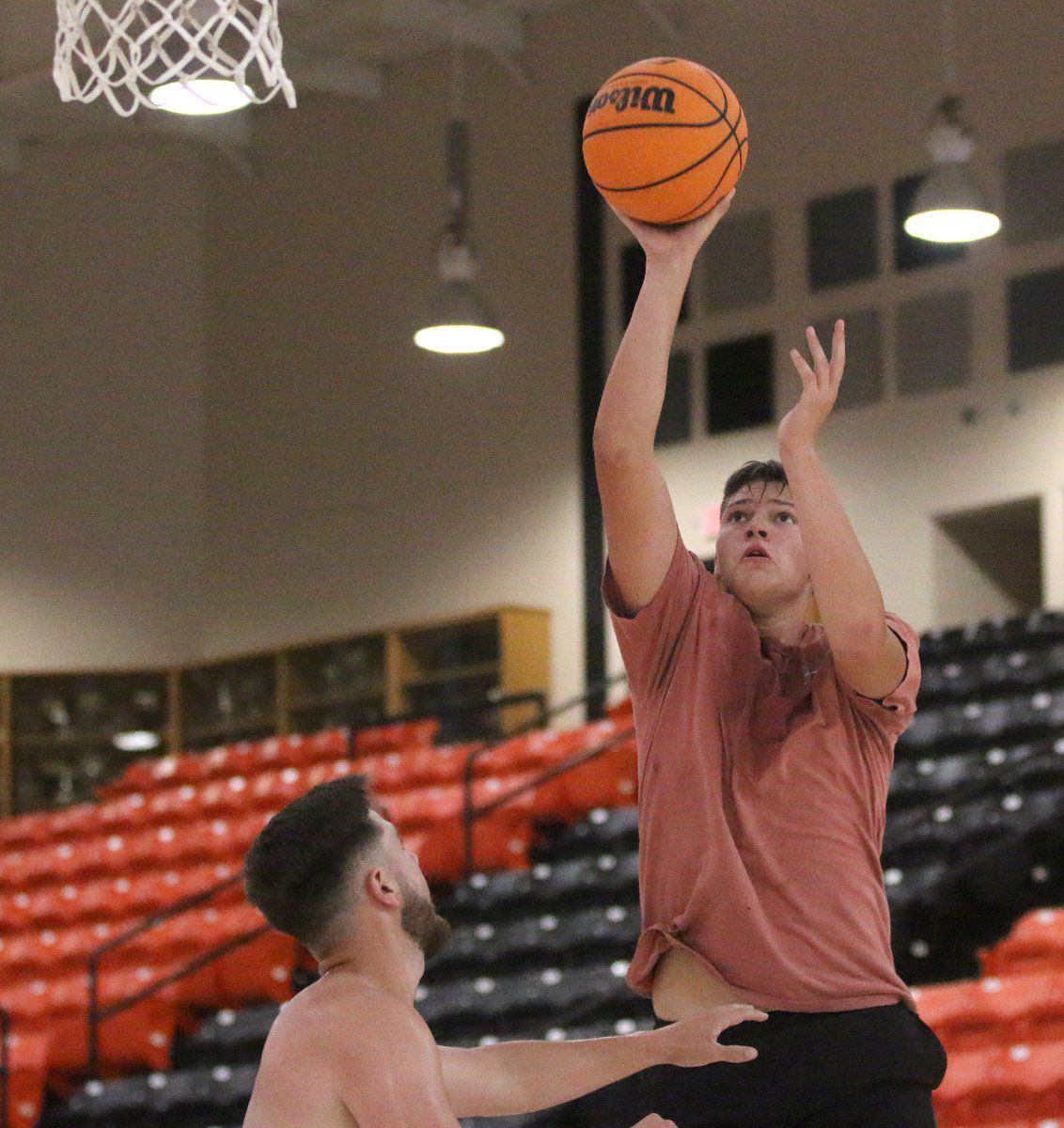 Hayden Smith shoots over Hayden Wagers Wednesday during a five-on-five scrimmage at the TMAC. The Tigers completed their fourth practice since beginning summer workouts on June 15. 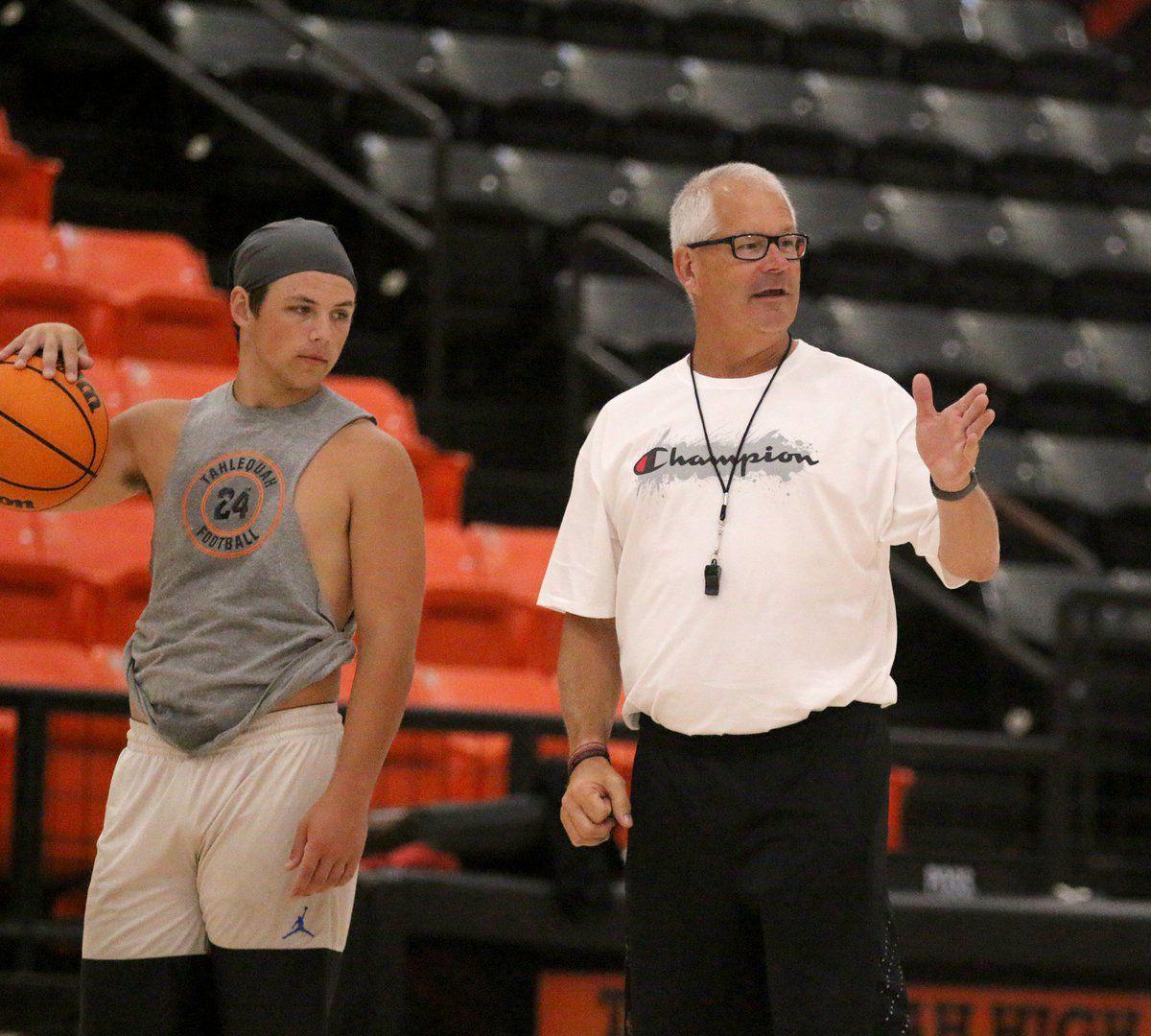 Hayden Smith shoots over Hayden Wagers Wednesday during a five-on-five scrimmage at the TMAC. The Tigers completed their fourth practice since beginning summer workouts on June 15.

Klingsick, who was officially hired on June 11 to replace Duane Jones, is taking over a program that surged last season and advanced to its first state tournament in 11 years.

Athletic Director Matt Cloud said he wanted experience and stability for the program during his coaching search.

Klingsick has 24 years of coaching experience, 19 of those as a head coach.

“He’s been in the business a long time and there’s a lot of stability in him,” Cloud said on June 15. “He’s done this for 24 years so he’s got some wherewithal and he understands kids. We were looking for an established coach that’s been around, and he’s done it at a high level. He’s been all the way down from 2A, all the way to 6A. I think he’s going to be a positive guy with a lot of integrity. He’s a student of the game. You can tell he really prepares for each game. He’s exactly what we were looking for.”

Klingsick, from Amarilo, Texas, has had head coaching stops at Mulhall-Orlando, Newkirk, Dalhart (Texas), Tulsa Webster, Shidler, Dumas (Texas), Sherman (Texas) and was a seventh grade girls head coach last season at Stillwater. His longest tenure as a head coach came at Dumas, from 2010 to 2016.

Now, he’s ready for his next coaching experience.

The transition for Klingsick has been smooth while in the process of evaluating players and establishing a connection with players and assistant coach Matt Qualls, a former standout at Tahlequah who was an assistant under Jones.

“It’s been really good,” Klingsick said. “I didn’t know anybody on the first day. I’ve watched them on Hudl a little bit, so I’ve seen them, but I didn’t know anybody. I’ve been trying to get to know everybody. Talking to other coaches, they’ve been talking to me about personalities and different things, and that’s all been good. I’m still trying to get to know the kids. I’m still working on names and what they can do. I’m trying to evaluate what I’m watching out there.”

The biggest battle for Klingsick has been trying to cope with the ongoing COVID-19 pandemic while laying a foundation.

“They’ve come in for four days and they’ve worked hard,” Klingsick said. “I know these kids have been sitting at home wanting to do something, so getting up here has been good. It’s been a crazy summer. Normally these guys would be at team camps and doing all these kinds of things, but we’re kind of quarantined into our own little area right here. They’re doing good.”

Wednesday was a day of five-on-five scrimmaging at the TMAC.

“We try to simulate five-on-five, getting up and down and doing some conditioning,” Klingsick said. “We’ve played some good games, so I’m really excited about what we’ve done so far.”

The Tigers didn’t get to finish their state tournament run last year after COVID-19 picked up steam, and Klingsick is using it as momentum just days into his job.

“I couldn’t even imagine being on a bus and going to the state tournament and then being told to come back,” he said. “I’ve told the guys, ‘I hope you’re hungry to get back.’”