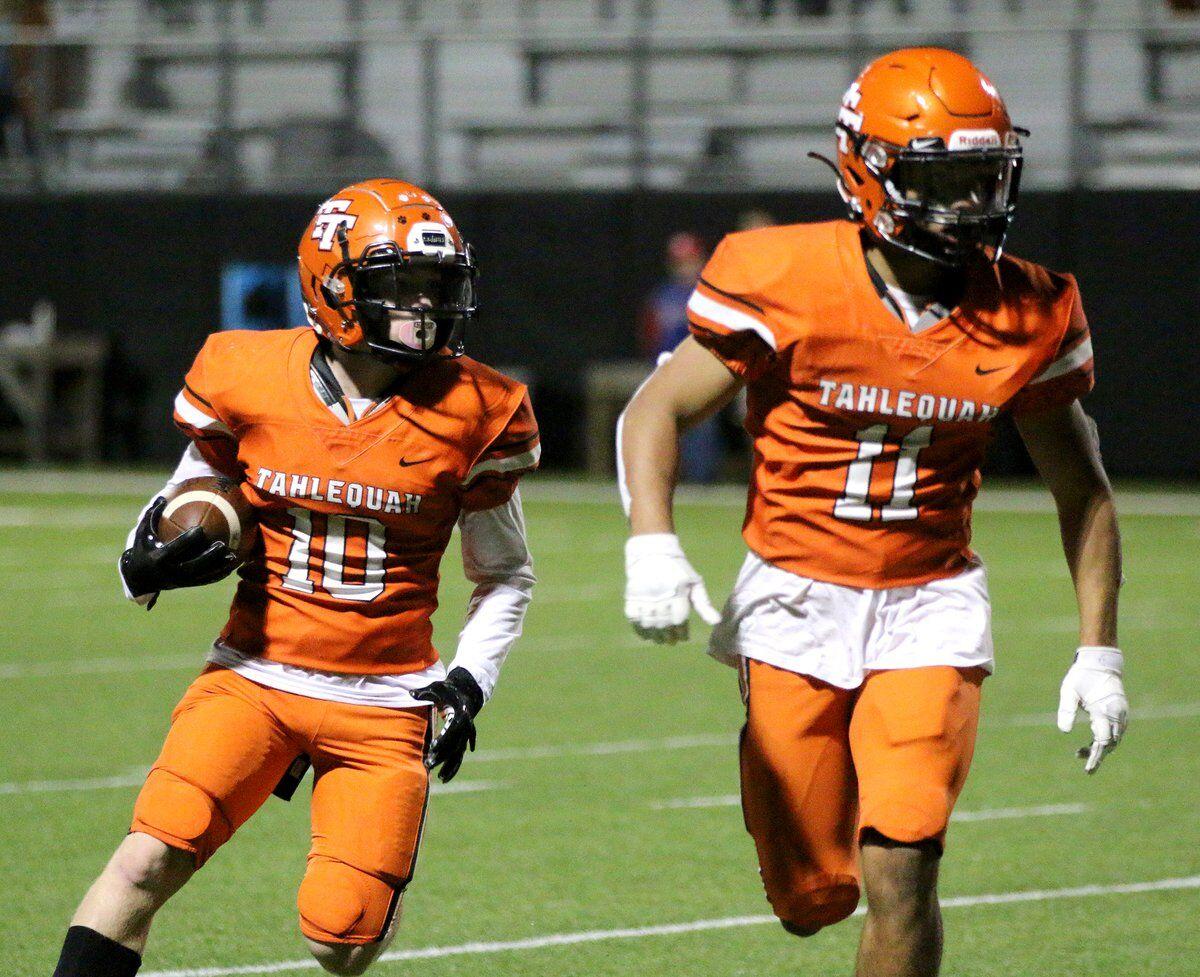 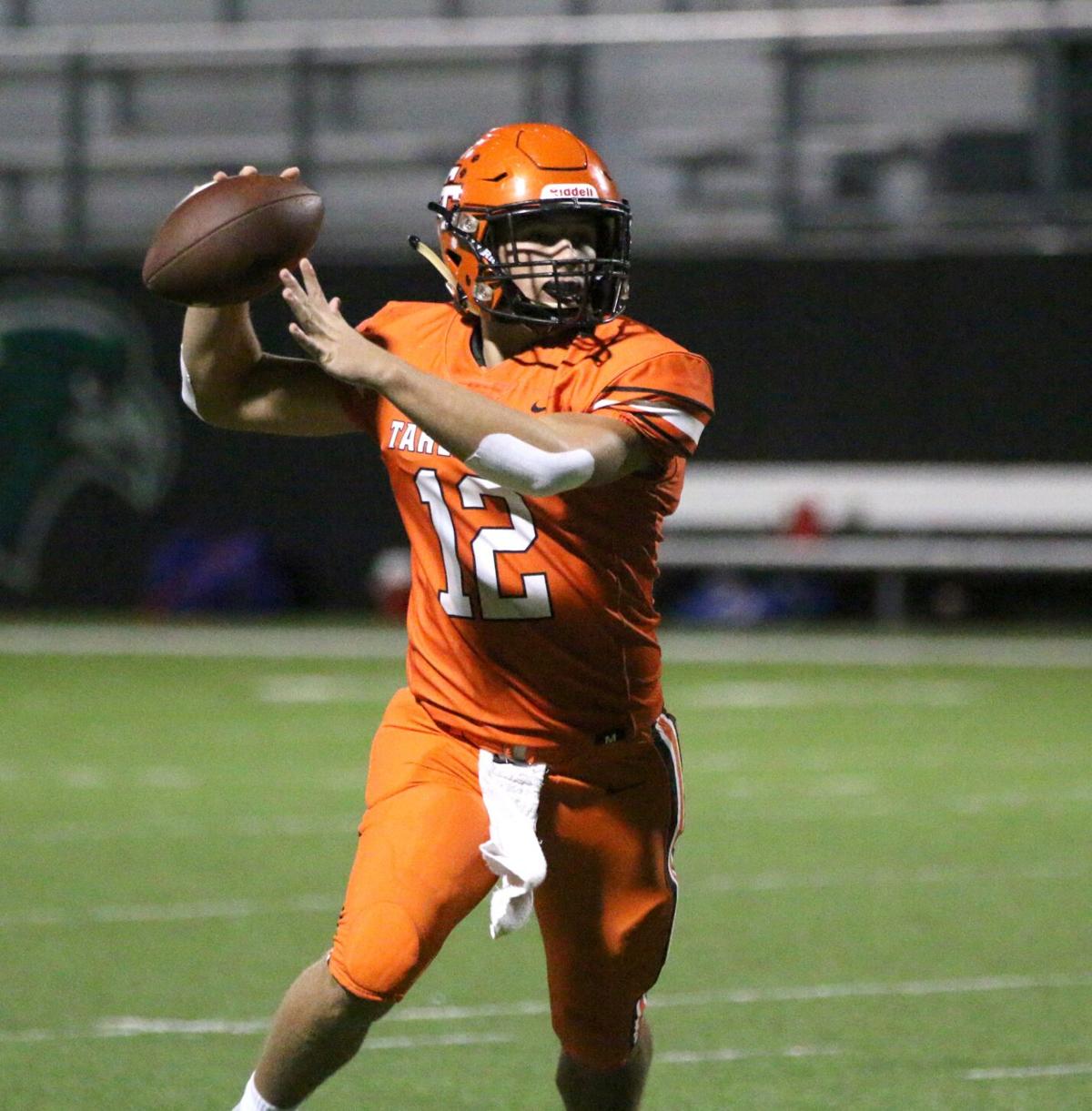 Tahlequah junior quarterback Tyler Joice completed all 11 of his pass attempts for 166 yards and two touchdowns in the Tigers' 47-0 win over Tulsa Memorial Friday at Doc Wadley Stadium. 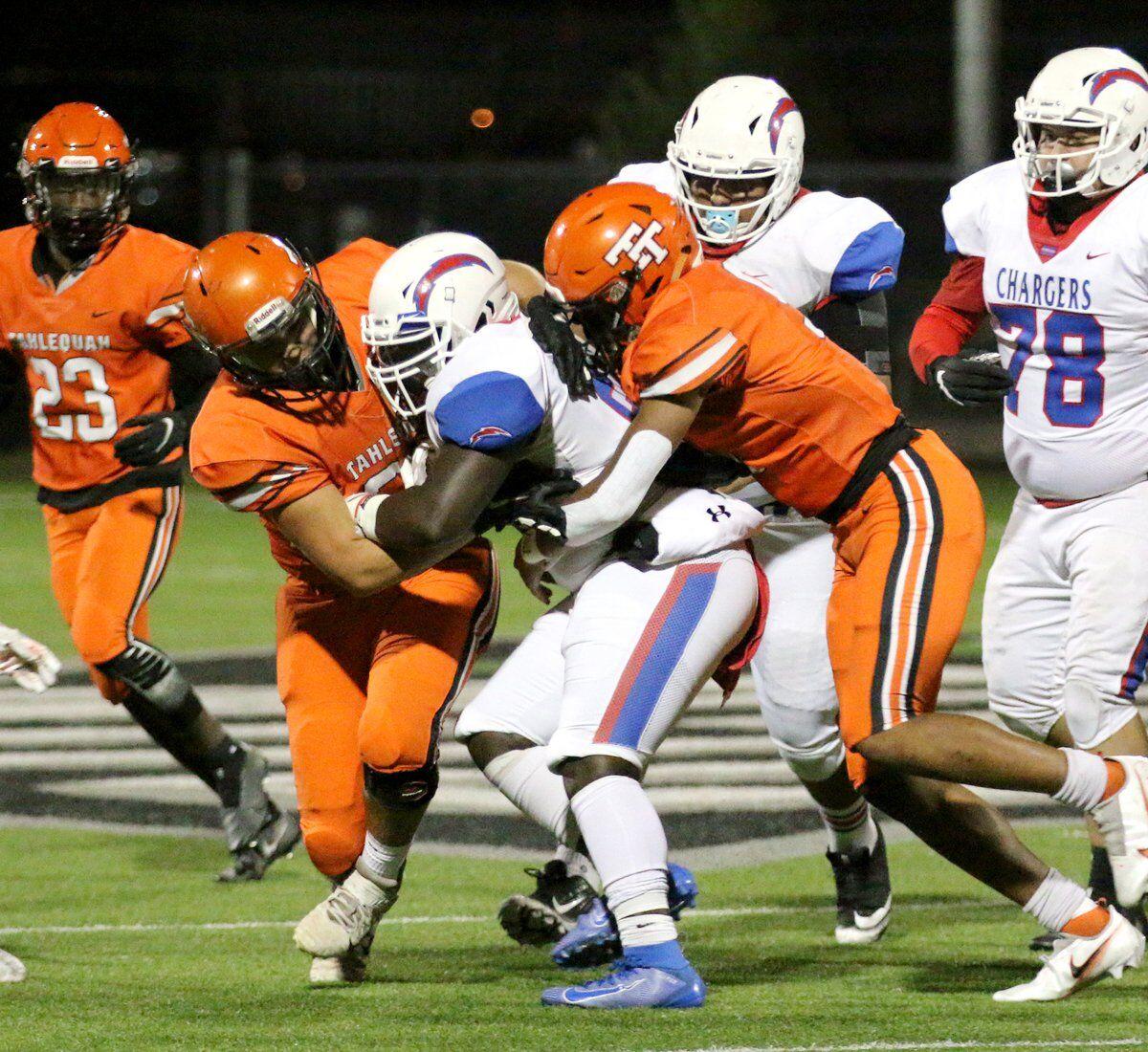 Tahlequah junior quarterback Tyler Joice completed all 11 of his pass attempts for 166 yards and two touchdowns in the Tigers' 47-0 win over Tulsa Memorial Friday at Doc Wadley Stadium.

It’s the third straight win, second straight shutout and third shutout of the season by the Tigers, who improve to 5-3 overall and 4-1 in District 5A-4. Tahlequah blanked Sapulpa, 34-0, last week on the road and posted a 72-0 shutout win over Tulsa Hale in week five.

The Tahlequah defense, which also held Tulsa McLain scoreless in the season opener, forced three more turnovers to push its total to 21 on the season. The Tigers have allowed just seven points over the last three weeks.

“Our defense has done a really good job of being very active,” Tahlequah head coach Brad Gilbert said. “That goes to our 9-5-9. Some years we’re able to create [turnovers] and some years we’re not. This group has been able to do that and that’s been a key to our success. They were great tonight and got another shutout for us this year.”

“It was just a really good night,” Gilbert said. “Our kids played well and it sets up the big game next week. We talked about it all week...we’ve got to take care of ourselves. There’s not a lot of secrets to life to be successful, it’s just doing things right. That’s the message we’ve had all week. If you go out and live life the right way, you play the right way, you’re a great teammate...all these things, they go into it. These guys have really embraced what our football program is about, and they’ve been getting better every week.”

Joice didn’t throw an incompletion, completing all 11 of his pass attempts, and threw for 166 yards and two touchdowns. His two biggest completions came on a 61-yard completion to Parker Lane during the second quarter, and a 32-yard connection with Qua’shon Leathers in the third quarter.

McMurtrey, who is averaging better than 10 yards per carry on the season, surpassed 100 yards for a third consecutive week, rushing for 145 yards on 16 carries with three touchdowns.

“I thought the offense executed really well all night,” Gilbert said. “I thought Tyler played really well tonight, threw the ball really well and was very accurate. Malik ran the ball well again, and we got a lot of guys involved offensively. That was good and important moving forward with this stretch run in front of us.”

Joice got the scoring started on Tahlequah’s first possession with a 15-yard touchdown pass to senior receiver Kobey Baker. Joice’s second TD pass went to senior receiver Tanner Christian from five yards out with 1:48 remaining before halftime that gave the Tigers a 27-0 lead.

McMurtrey gave Tahlequah a 14-0 lead in the opening quarter on a 13-yard touchdown run that capped a seven-play, 81-yard drive. McMurtrey started the drive with back-to-back runs of 11 and 15 yards.

McMurtrey added his second scoring run from two yards out that extended Tahlequah’s lead to 20-0 at the 9:17 mark of the second quarter. The score was set up by Joice’s 61-yard completion to Lane. McMurtrey reached the end zone on a 1-yard run at the 3:35 point of the third quarter to push the Tigers’ lead to 34-0.

Tahlequah’s final two scores came a Carson Ferguson 4-yard run in the third, and a 16-yard run by Josh Munoz at the start of the fourth quarter.

The Tigers, who averaged 9.4 yards per play and were a perfect 3 for 3 on third downs, received 72 yards receiving on two receptions from Lane. Baker had a team-high three catches and finished with 25 yards.

Memorial was limited to 168 total yards and averaged just 2.9 yards per play. The Chargers were led offensively by running back Keshaun Thompson, who finished with 90 yards on 18 carries.

The Tigers will close the regular season on Friday, Nov. 6 with a trip to third-ranked and unbeaten Collinsville (9-0, 6-0). The Cardinals defeated Pryor, 63-41, Friday to claim the district championship and hand Pryor (6-2, 4-1) its first district loss.

“We’re going to enjoy this win tonight and then next week we’ve got a big challenge in front of us,” Gilbert said. “We’re excited.”