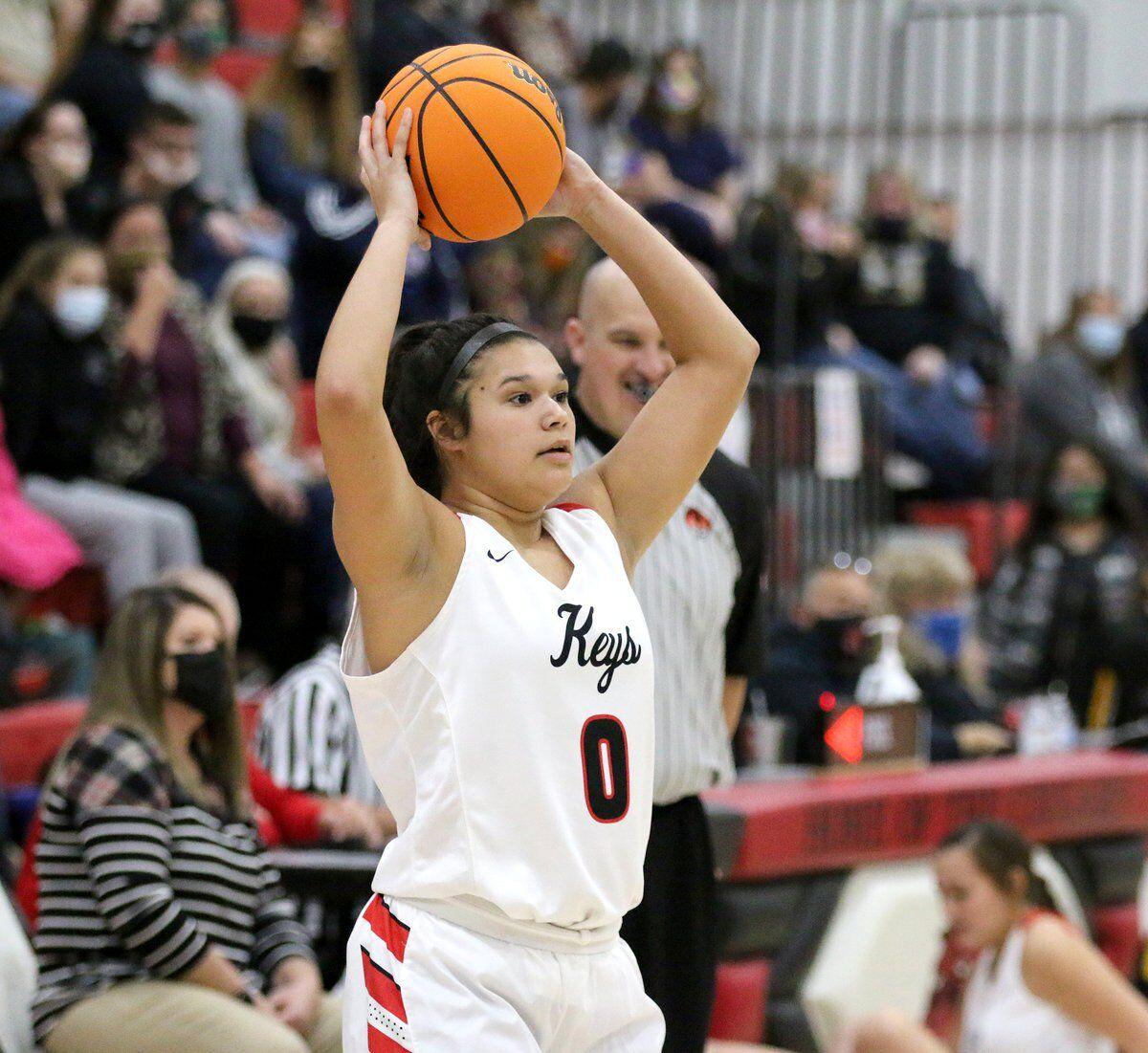 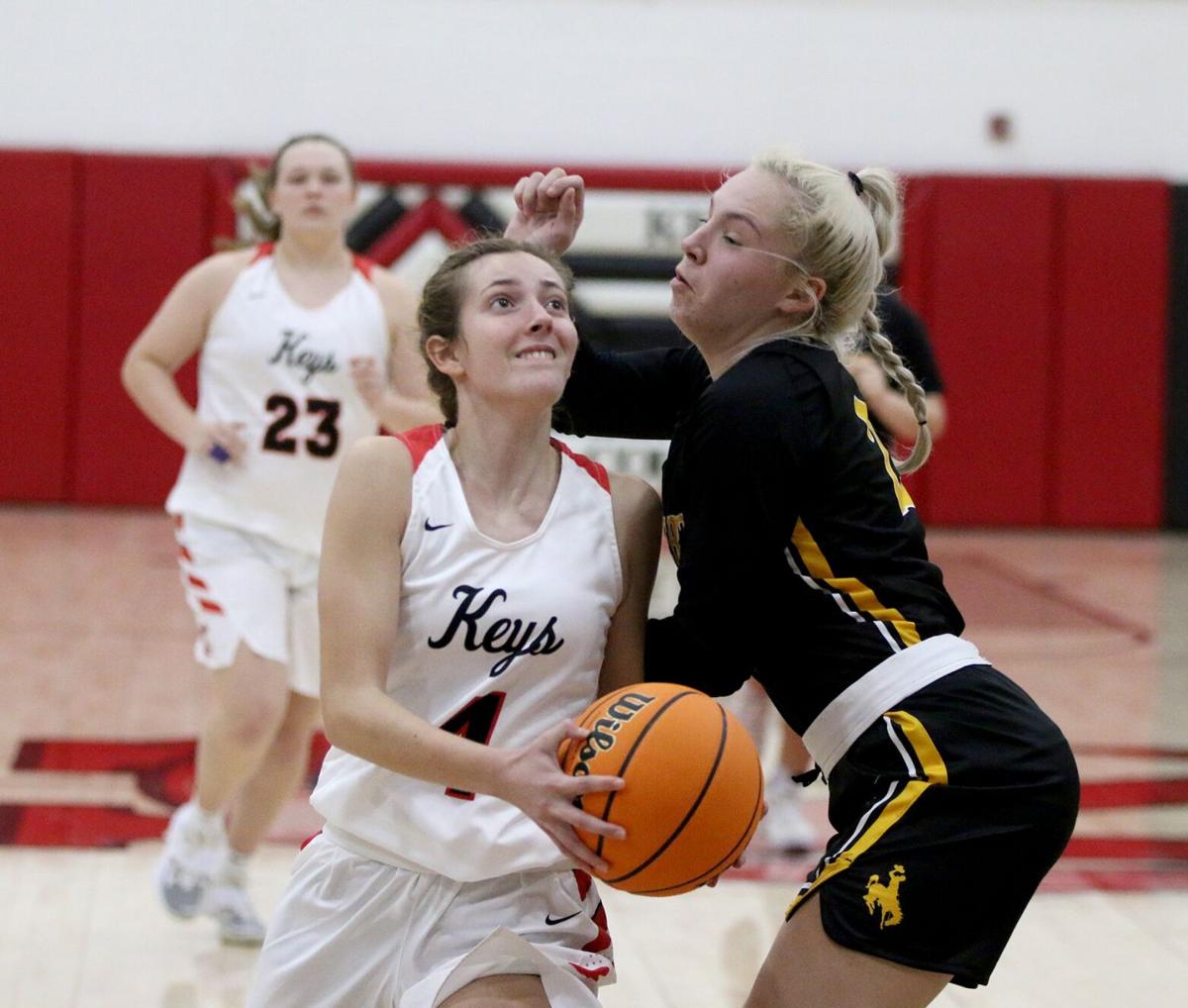 Keys junior guard Sierra Winkler goes up for a layup as Hulbert's Callie Brave defends during the third quarter Thursday against Hulbert in Park Hill. The Class 3A No. 18 Lady Cougars defeated the Lady Riders, 69-30.

Keys junior guard Sierra Winkler goes up for a layup as Hulbert's Callie Brave defends during the third quarter Thursday against Hulbert in Park Hill. The Class 3A No. 18 Lady Cougars defeated the Lady Riders, 69-30.

PARK HILL -- The guard duo of Kylie Eubanks and Ashlynn Berry continued to impress Thursday for Keys as they combined for 35 points and helped carry the Class 3A No. 18 Lady Cougars to a 69-30 win over Hulbert in Park Hill.

Eubanks scored a game-high 19 points, including 11 in the opening eight minutes, and Berry scored 11 of her 16 points in the first half as Keys scored the game's first 22 points and led 32-5 after one quarter and 48-17 at halftime.

Eubanks and Berry, who went into Thursday's contest both averaging 19.5 points through two games, knocked down five of the Lady Cougars' seven 3-pointers and accounted for 20 points in the first quarter.

"They're kind of our 1-2 punch and I'm so excited to be able to coach two girls like that," Keys first-year head coach Rick Kirkhart said. "They're both awesome players and they work extremely hard. When you have players like that...they're kind of our floor leaders...they set the temp of the game."

Keys, coming off a JT Dixon Haskell Tournament championship with wins over Wagoner and then-3A 10th-ranked Morris, stays unbeaten at 3-0.

Eubanks buried two of her three 3s early in the contest, her second from the left wing at the 6:19 mark that gave Keys an 11-0 advantage. Berry later scored seven straight points, including a steal and basket that put Keys up 22-0 with 3:23 remaining in the first quarter.

"If [Eubanks and Berry] out and set the tempo of the game then we've got an opportunity to win the game," Kirkhart said. "Those two are pretty equal in their abilities and have very similar styles."

Hulbert, who falls to 0-3 under first-year head coach Joseph McClure, stopped the bleeding momentarily and ended Keys' run on a Alison Cole layup at the 3:10 mark, but the Lady Cougars scored 10 of the next 13 points to extend their lead further. Eubanks started the second surge with a basket, and Kristina Holmes, Hayden Thomas and Allie Eubanks each added inside scores to make it 32-5.

Keys led by as many as 38 points in the first half following an Allie Eubanks' basket that made it 45-7 at the 5:10 point of the second quarter.

Ashlyn Radomski gave the Lady Cougars their largest lead of the contest in the fourth quarter after a jumper and 3-pointer put them up 65-22 with 4:27 remaining.

Sierra Winkler, who had 11 points and shot 9 of 12 from the free throw line in the win over Morris, finished with two points.

"The kids played extremely hard," Kirkhart said. "My first group went in there and just really took the game over. My second and third groups...I finished up with all freshmen on the floor."

"I'm excited for this team," Kirkhart added. "I think they can really do some good things in the playoffs."

The Lady Riders were paced by Brea Lamb's 15 points. Lilly Chambers closed with nine points, and Cole had four.

The Lady Cougars will be off until Jan. 5 when they visit Oktaha. Hulbert will also next play on Jan. 5 when it travels to Westville.