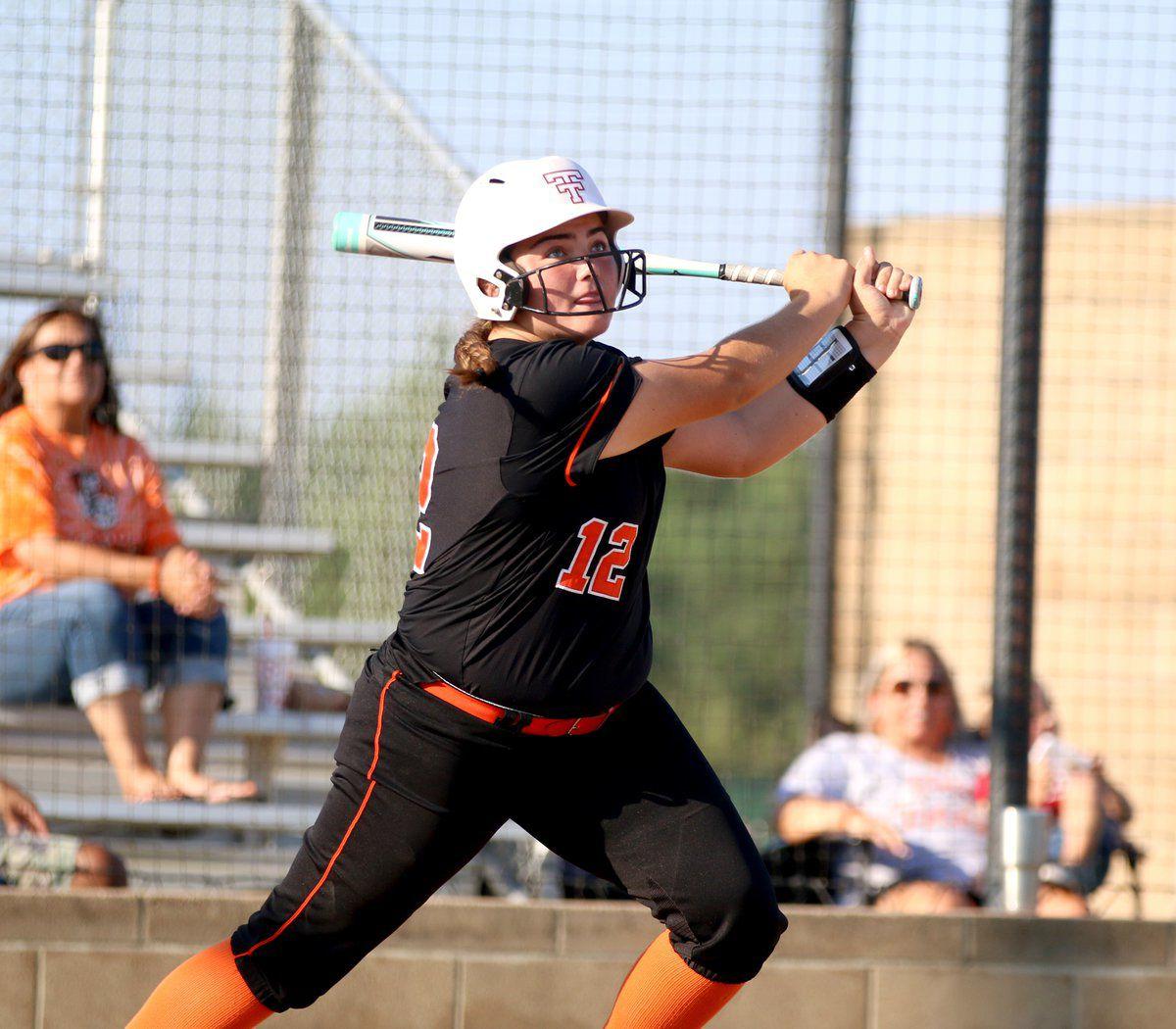 Tahlequah senior third baseman McKenna Wofford was named the District 5A-4 Player of the Year after hitting .509 with seven home runs and 45 RBIs. 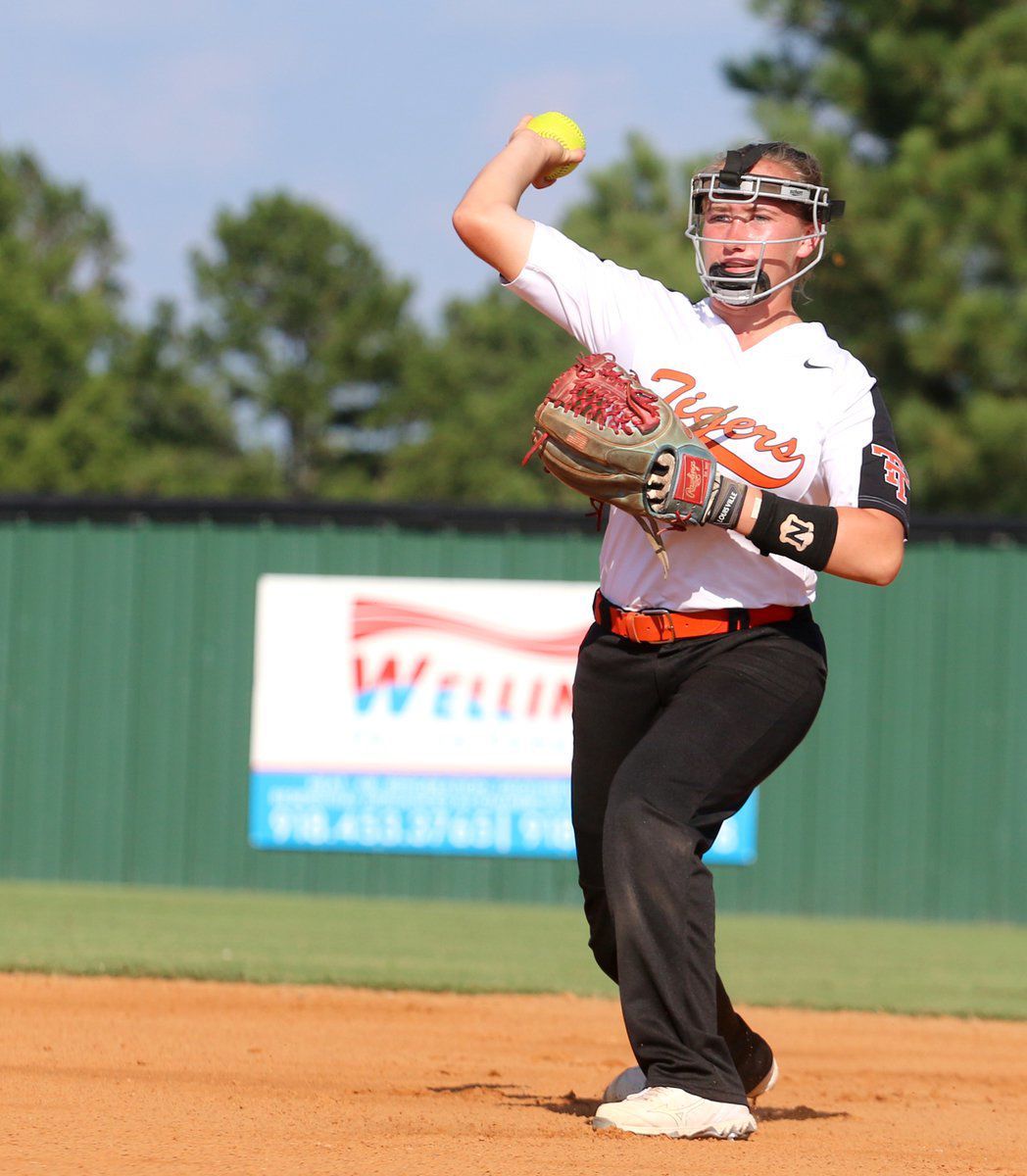 Tahlequah senior third baseman McKenna Wofford was named the District 5A-4 Player of the Year after hitting .509 with seven home runs and 45 RBIs.

“She was our leading run producer and our best offensive threat for a majority of the year,” Ray said. “It’s a high honor to get picked Player of the Year because there were some pretty good offensive kids in our district. She’s very deserving. She’s made herself into a really complete player both offensively and defensively.”

Danner, who picked up steam late in the season, hit .448 with five home runs, 42 RBIs, 30 runs scored, nine doubles and two triples despite missing nine games early in the season due to injury. Danner had an on-base percentage of .543 and an OPS of 1.313. The second baseman closed the season with a 10-game hitting streak, a stretch where she hit .568 with two home runs and drove in 19 runs.

“About the last three weeks of the season, offensively it started to click for [Betty],” Ray said. “I think she started seeing the ball really, really well and she went to the plate with an approach. Had it not been for the eight or 10 games she missed earlier in the year, her numbers would’ve been equal or maybe even better than what McKenna had.”

Tahlequah, who went 22-18 and advanced to the Class 5A State Tournament for the third consecutive year, also had first team selections in pitchers Bailey Jones and Mikah Vann, outfielder Mia Allen and utility player Savannah Wiggins.

Jones, a junior, went 15-10 and posted a 3.41 earned run average over 154 innings. She collected 73 strikeouts and issued just 20 walks. Vann, a freshman, tossed a no-hitter in the 5A Tahlequah Regional Tournament against Tulsa Edison and followed with a complete-game shutout on the next day against Claremore to help send the Lady Tigers to the state tournament.

It’s the seventh District Coach of the Year honor for Ray, who said he hasn’t changed his approach to coaching. Ray has also had successful head coaching stops at Henryetta and Morris where he combined for six state tournament appearances.

“I haven’t changed the way I’ve done things since I’ve been in this business,” he said. “You gotta show up every day and you’ve got to go to work. If you can do the fundamental parts of the game well and do them better than the other teams, 99 percent of the time you’re going to come out on top. These kids bought into that mentality. They understand what it takes.

“I’m sure 20-25 years from now I’ll look back on it and it’ll really sink in, but the kids are the ones that deserve all of the credit. What I’ve always tried to do was just kids in positions where they can be successful.”

Tahlequah’s season came to an end in a 4-1 loss to Durant in the quarterfinal round of the state tournament on Oct. 17 in Shawnee. The Lady Tigers went 11-1 in 5A-4 and finished behind district champion Durant.

“That was sort of the ultimate goal that we set as a team was to get to the state tournament with a young group,” Ray said. “We knew we were going to be young and we thought if we could get them to the state tournament and get that experience under their belt that it’d benefit us over the next two or three years. In reality, we were probably a year ahead of schedule.”