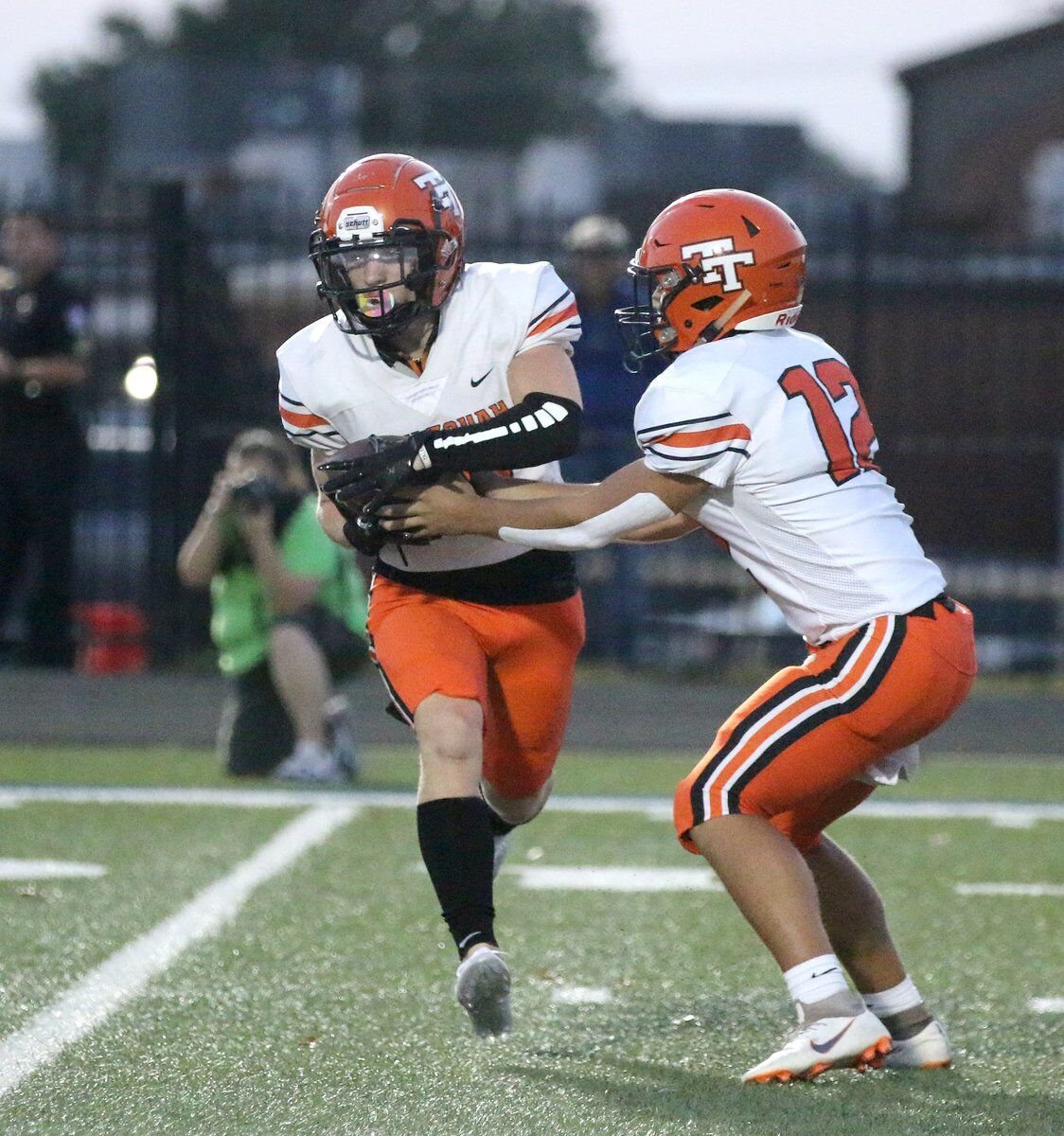 Tahlequah quarterback Tyler Joice hands off the Kobey Baker on Friday, Oct. 9 against Sapulpa. Baker had three touchdowns, and Joice combined for 232 yards. 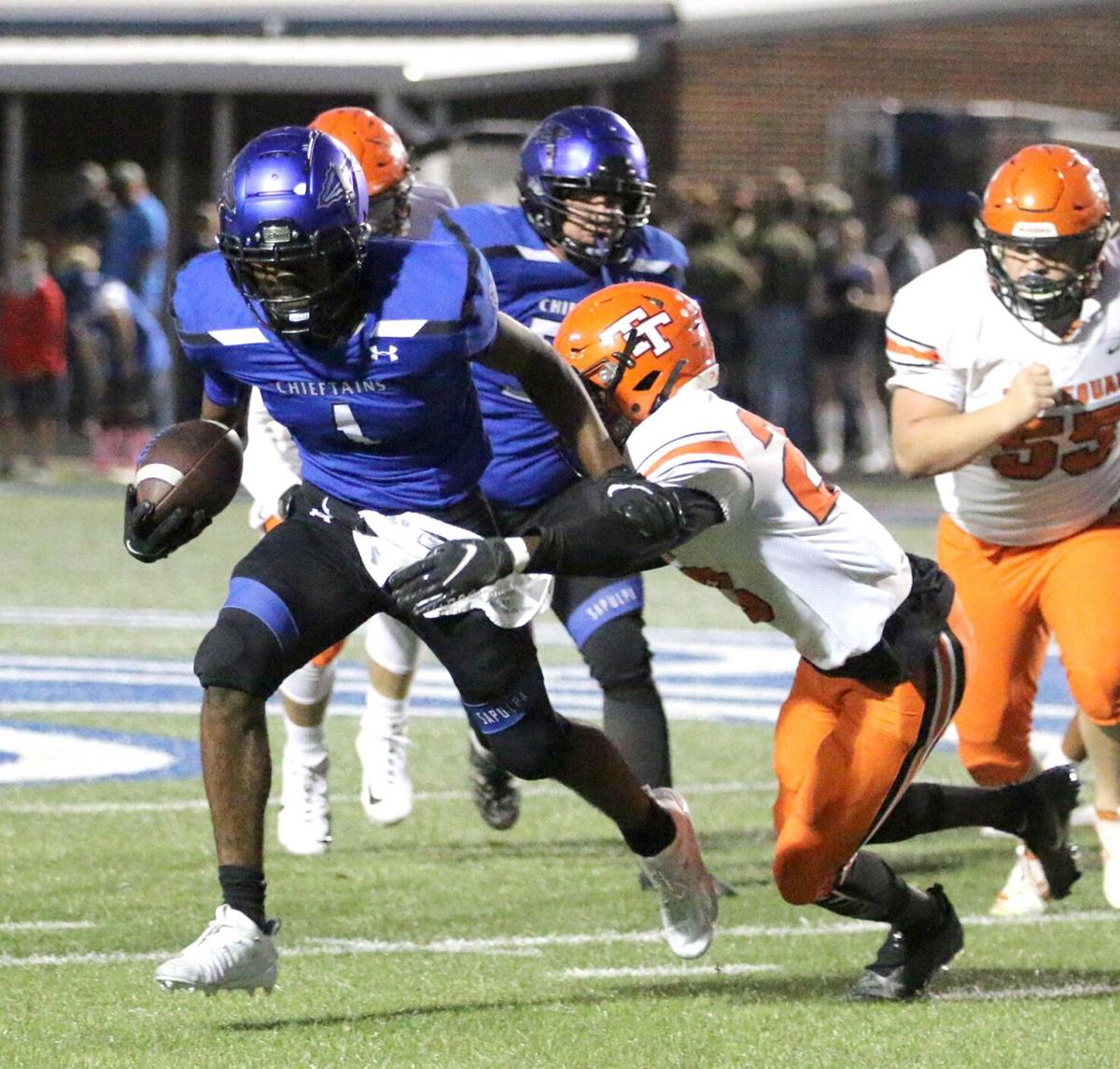 Tahlequah quarterback Tyler Joice hands off the Kobey Baker on Friday, Oct. 9 against Sapulpa. Baker had three touchdowns, and Joice combined for 232 yards.

Tahlequah will try to bounce back from a difficult road loss last week in Sapulpa when it returns to Doc Wadley Stadium to face Claremore Thursday in a 7 p.m. kickoff.

The Tigers are 2-3 overall and 1-1 in District 5A-4, while the Zebras enter at 4-2 and 1-1. Claremore handed Tahlequah its only regular season loss last season in week 10 at Doc Wadley Stadium.

A late turnover in the fourth quarter hampered the Tigers in their 34-24 loss to Sapulpa. Tahlequah, who overcame an early 14-0 hole and led 17-14 and 24-21 in the fourth quarter, got all three of its touchdowns from senior Kobey Baker. Baker, who finished with 71 rushing yards and 70 receiving yards, had TD runs of 10 and 44 yards and a 34-yard scoring catch.

“I was proud of the guys,” Tahlequah head coach Brad Gilbert said. “They jump out on us 14-0 and our kids didn’t flinch. They kept battling back, and it speaks to the character that they have. We’ve just got to continue to work and get better everyday.”

Tahlequah averaged better than seven yards per play, closed with 381 total yards of offense and committed two turnovers against the Chieftains.

“We can go back to the McAlester game and we felt pretty good about the game afterwards,” Gilbert said. “We had found something and we made some adjustments up front. It wasn’t a personnel thing, it was adjustments to our scheme to fit our personnel. We saw that and we saw the improvements with each passing week. We came out with a gameplan last week and we really executed it. We scored on four of our eight possessions. We’re getting closer and we’re getting better.”

Junior quarterback Tyler Joice completed 10 of 13 passes for 125 yards and added a team-high 107 rushing yards in last week’s loss, while junior running back Malik McMurtrey rushed for 83 yards and senior receiver Tanner Christian finished with 31 receiving yards on a pair of receptions.

Defensively, the Tigers gave up 386 total yards, 262 of that on the ground, and allowed Sapulpa to convert on 11 of its 13 third downs.

“Defensively, we’ve played well all year,” Gilbert said. “You look at Friday night, Sapulpa’s very talented. I thought our guys had a good night, other than the third downs. That was the key, getting off that field, and we just couldn’t do it. They did enough to keep us in the game.”

“Our kids compete, and in the three losses, we’ve played some good football teams,” Gilbert said. “We’re in a situation this year that if we don’t do all the things the right way, we’re not good enough to overcome the talent on the other side. Last week, we had two turnovers and they were 11 of 13 on third down. If you can’t get off the field and you turn the ball over, that will cost you ball games.”

“Claremore has always given us problems,” Gilbert said. “They’re a physical football team, always have been. We’ve had a difficult time offensively against them in years past. I don’t see it being any different this time. Hopefully our defense has a great night and keeps us in the game. Claremore always presents a challenge in all three phases of the game. They’ve got a lot of depth, a lot of guys that can do some things.”