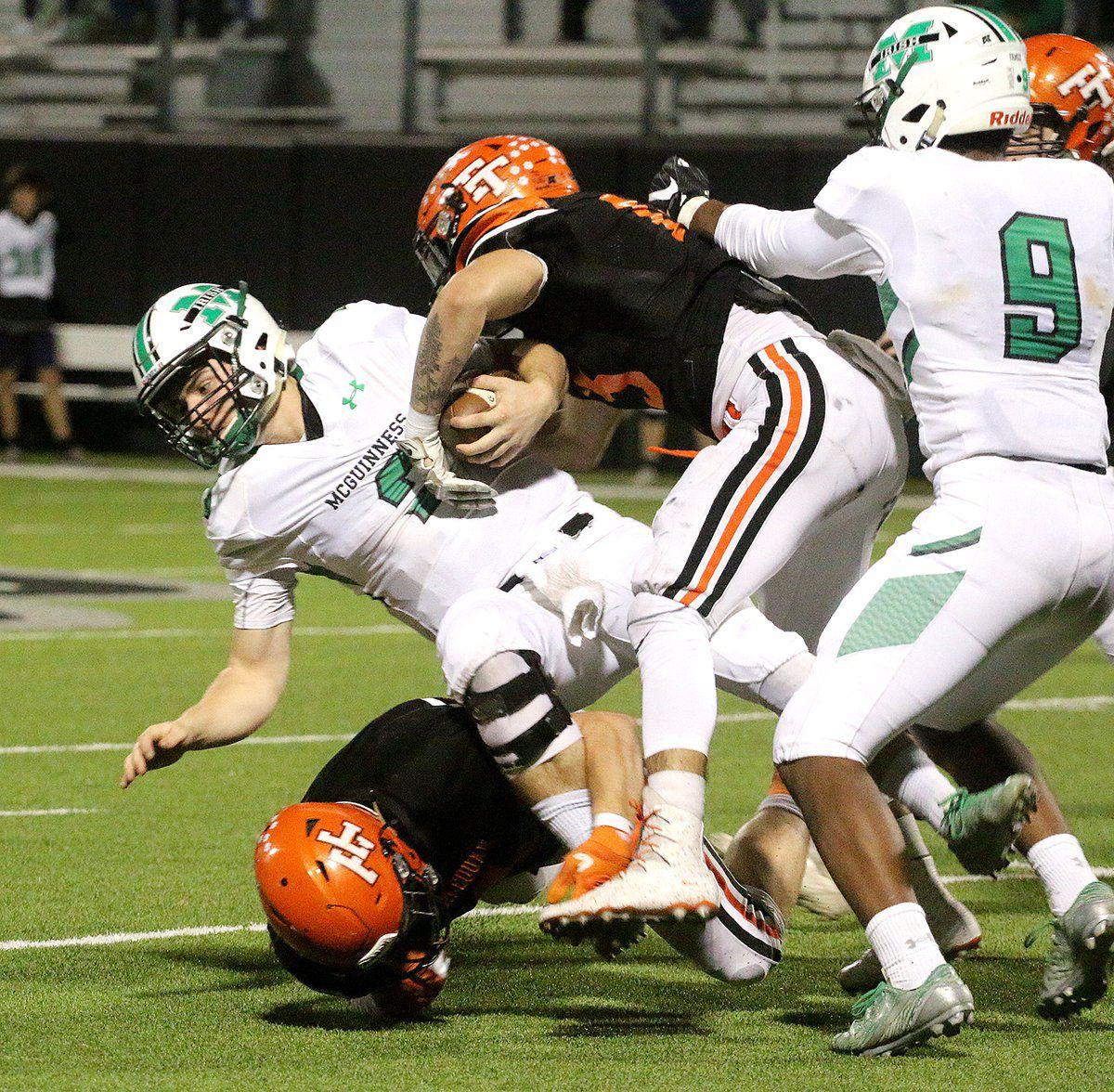 Tahlequah defenders Brian Resch and Seth Berry take down Bishop McGuinness quarterback Brennan Mullins during the second half of Friday's Class 5A quarterfinal round game at Doc Wadley Stadium. 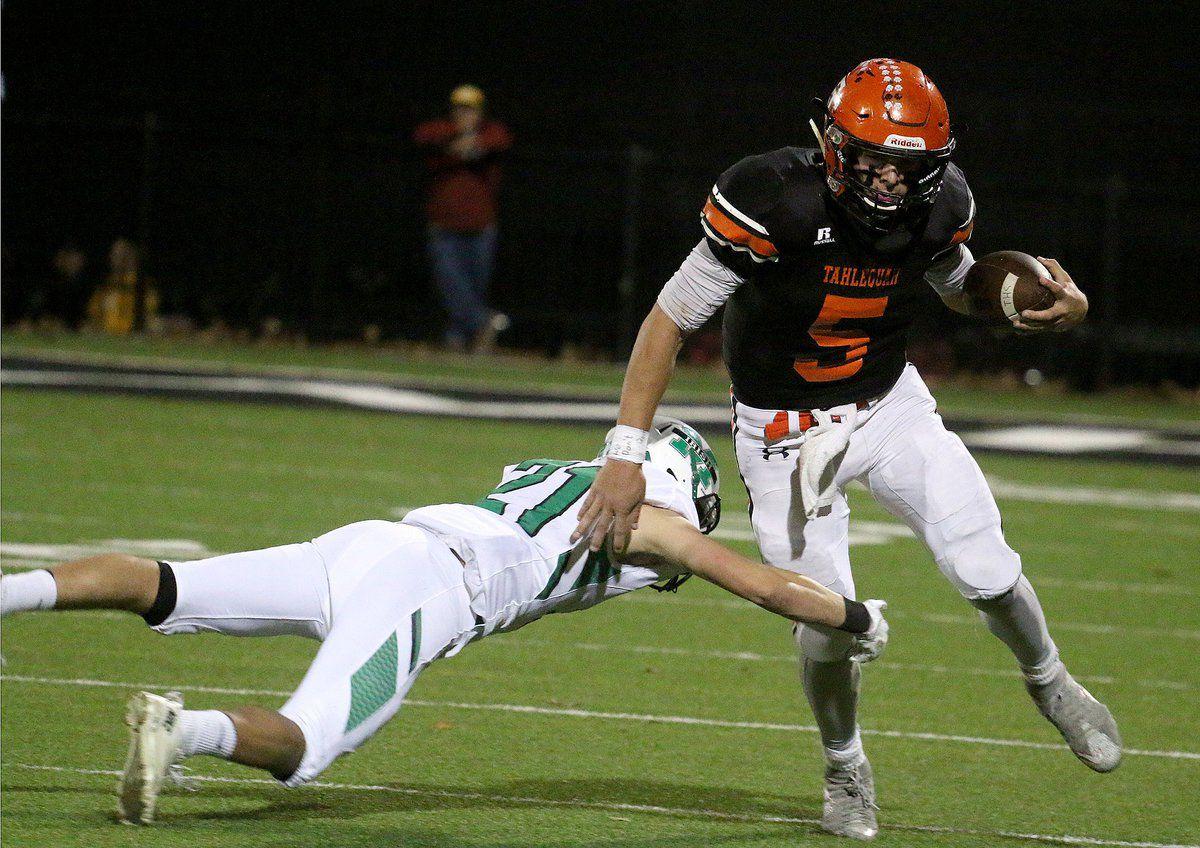 Tahlequah defenders Brian Resch and Seth Berry take down Bishop McGuinness quarterback Brennan Mullins during the second half of Friday's Class 5A quarterfinal round game at Doc Wadley Stadium.

Missed opportunities and mistakes have plagued Tahlequah at times this season.

The Tigers couldn't afford to have mishaps Friday against second-ranked Bishop McGuinness in the quarterfinals of the Class 5A playoffs.

But they did so at the worst possible times, and the result was a season-ending 19-9 loss to the Irish in their first home playoff game since 1993 at Doc Wadley Stadium.

The Tigers went scoreless on four trips inside the red zone. They had turnovers on two of those trips, and penalties spoiled the other two trips.

"We had opportunities," Tahlequah head coach Brad Gilbert said. "We moved the football, and defensively we played well enough to win the football game. You just have to finish drives, and we've had those moments this year at times where we haven't been able to do that.

"When you come up empty four times inside the 25-yard line, you're not going to beat good teams. That's just the way it is."

"I can't say enough about this senior group and everything they've given to this program," Gilbert added. "They've won 23 games in three years and they've been to the quarterfinals twice. They've been a part of this wave of young men that have come through the program and really changed the direction of it. It's put us on the map, and it's something to be proud of. They have nothing to hang their heads about and I'm honored to have been their coach."

McGuinness, which improves to 11-1 and advances to play Noble in next week's semifinal round, sunk Tahlequah's hopes when Irish quarterback Brennan Mullins scored on a one-yard touchdown run with 3:56 left to give his team what would be a 10-point lead.

The Irish converted a game-changing 4th-and-15 from the Tiger 20-yard line to set up Mullins' score, the second of the game for the senior.

Tahlequah, which closes at 8-4 and falls to the Irish for the second straight year in the quarterfinals, got to within 12-9 with 11:35 remaining on its lone touchdown -- a 14-yard run by senior quarterback Cayden Aldridge. The Tigers went 55 yards on the drive.

But the Irish had an immediate answer.

They marched 77 yards and chewed up over seven minutes before Mullins' one-yard scoring run. The big play came on a Mullins completion to Carter Moody on 4th-and-15 that gave the Irish a first-and-goal inside the five.

McGuinness, led by sophomore running back Tyler Travis, who rushed for 137 yards on 24 carries, scored the game's first points following an Aldridge interception.

Travis completed the 31-yard drive with a three-yard TD run at the 7:02 mark of the first quarter.

The only other points in the first half came on a 33-yard field goal by Tahlequah's Ryan Hembree with 1:16 left before halftime.

But the Tigers missed on a golden opportunity earlier in the second quarter.

Aldridge connected with senior receiver Braxton Stopp for a 73-yard pass play that gave the Tigers a first-and-goal from the seven. But the scoring chance was erased when Seth Berry fumbled at the four after a reception.

The Irish went on an 80-yard scoring drive to begin the second half to take a 12-3 lead, which was capped by Mullins' first touchdown at the 8:08 mark.

McGuinness finished with 321 total yards of offense. Mullins added 65 rushing yards on 10 carries. The Irish had 257 of their yards on the ground.

Aldridge completed 8 of 19 passes for 142 yards, and Stopp led all receivers with 122 yards on five receptions.

Tahlequah closes with eight wins for just the second time since 2000. The Tigers finished 8-3 in 2015 under Gilbert.