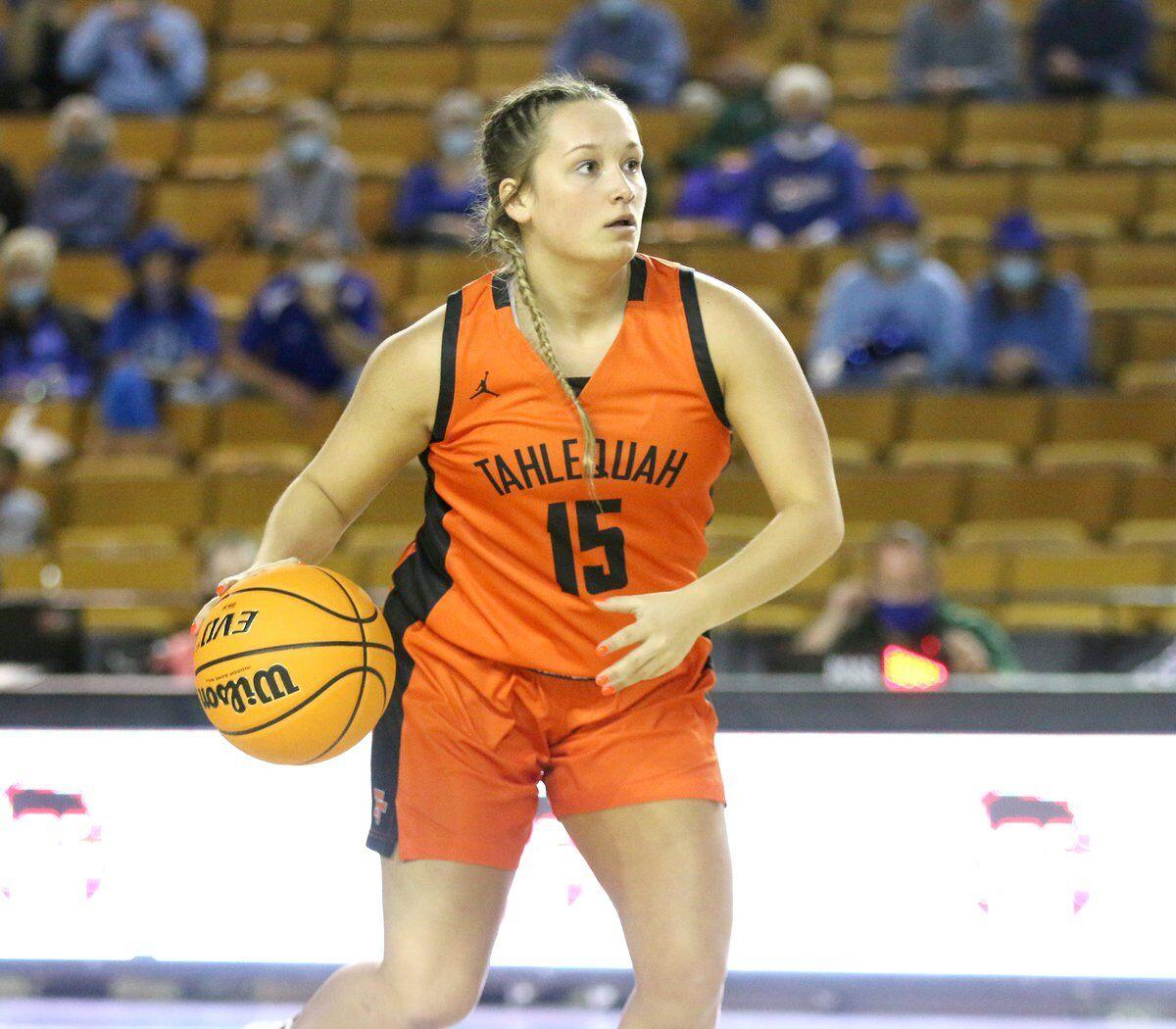 Tahlequah senior guard Kacey Fishinghawk scans the floor at the Mabee Center in Tulsa against Sapulpa during the first half of the Class 5A State Tournament Championship game on March 13. Fishinghawk has been named to the OGBCA Large East All-State Team. 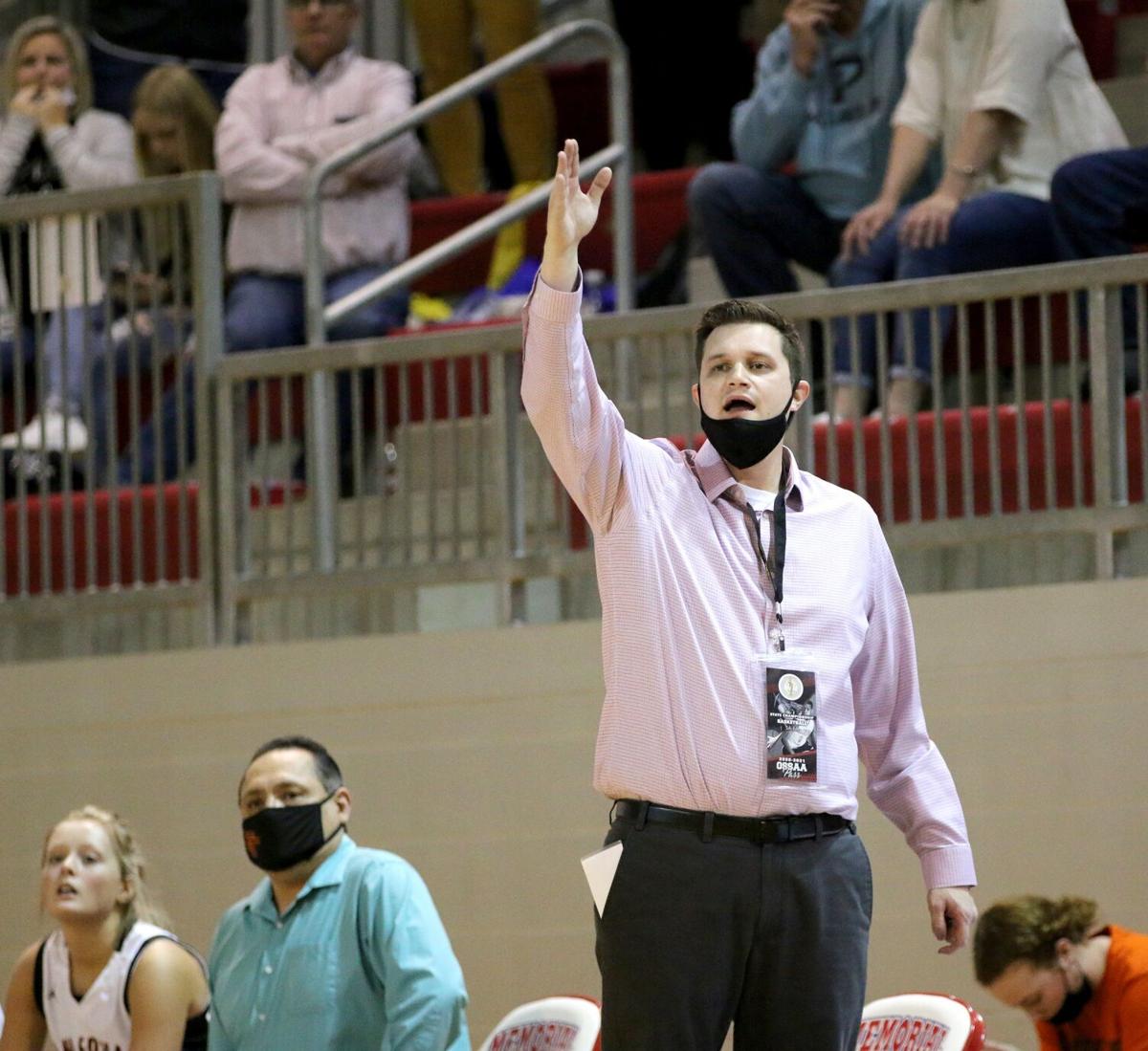 Tahlequah head coach David Qualls has been selected as the Southeast Region Large School Coach of the Year.

Tahlequah senior guard Kacey Fishinghawk scans the floor at the Mabee Center in Tulsa against Sapulpa during the first half of the Class 5A State Tournament Championship game on March 13. Fishinghawk has been named to the OGBCA Large East All-State Team.

Tahlequah head coach David Qualls has been selected as the Southeast Region Large School Coach of the Year.

Qualls, who guided the Lady Tigers to a Class 5A State Championship game appearance and a 23-3 overall record in 2020-21, was also honored in being named the Southeast Region Large School Coach of the Year.

During her final season and first year as a point guard, she averaged 8.5 points per game. The three-year starter and Friends University signee averaged 6.8 points over her career and had 139 made 3-pointers, shooting 39.1 percent. As a senior, Fishinghawk had a team-high 49 3-pointers and shot better than 47 percent from 3-point range. She was second on the team with 53 assists and shot 80 percent from the free throw line.

“I’m just proud of her,” Qualls said. “She’s a program kid that’s been here since her freshman season and she just got better and better every year. From where she started to where she finished, her versatility bringing the ball up and playing the point to go along with her shooting, she had a great career. She was very efficient and a smart player. She just had a great basketball IQ, and we couldn’t have asked for a better senior leader for this group.”

Tahlequah’s run to the state championship game was just the third championship game appearance in school history. The Lady Tigers fell to Sapulpa, 58-49, in the title game on March 13 at the Mabee Center in Tulsa.

Fishinghawk strung together two of her top performances in consecutive playoff games. She finished with 19 points and five 3s in Tahlequah’s area tournament championship game win over El Reno at the Tahlequah Multipurpose Activity Center, and followed with 16 points and four 3s in the quarterfinals of the state tournament against Carl Albert at Tulsa Memorial High School. Fishinghawk posted a season-high 23 points in the Lady Tigers’ season opener against Skiatook.

She follows past standouts Delaney Nix and Allie Stayathome as all-state selections under Qualls.

“My freshman year, I remember Coach Qualls talking about taking Delaney to all-state tryouts and just in the back of my head I was like, I wanted to do that one day...be an all-state player,” Fishinghawk said. “Coach Qualls called me and told me, and I ended up calling my mom and we both cried. It was a really emotional moment because it was something really special that I’ve been wanting to do for four years.”

Fishinghawk was a part of 61 wins as a starter and had 81 in her four years. She finished with 559 career points.

Qualls, also the Metro Lakes Conference Coach of the Year, picked up his 100th career victory on Jan. 23 against Verdigris in the Catoosa Port City Classic championship game and now has 111 wins in six years as a head coach at Tahlequah.

The Southeast Region Large School Coach of the Year is the second for Qualls, the first coming after the 2018-19 season.

“It starts with our girls. You have to have athletes that are dedicated, work really hard and are really serious about what they’re doing on the court,” Qualls said. “We have that here and I’m so fortunate for that. Our girls are so determined and they just want to get better every day. They’ve just bought in. It isn’t anything really special that we’ve done, it’s just the mindset of the girls, and they’re very coachable. I also have to recognize Coach [Charles] Knifechief because he’s my right-hand man and right there with me all the time.”

Qualls is also a three-time Metro Lakes Conference Coach of the Year.

The Lady Tigers won 16 of their final 17 games, captured an in-season tournament championship (Catoosa) and won both regional and area championships. They defeated 15 ranked opponents, including defending state champion and third-ranked Piedmont in the state tournament semifinals.