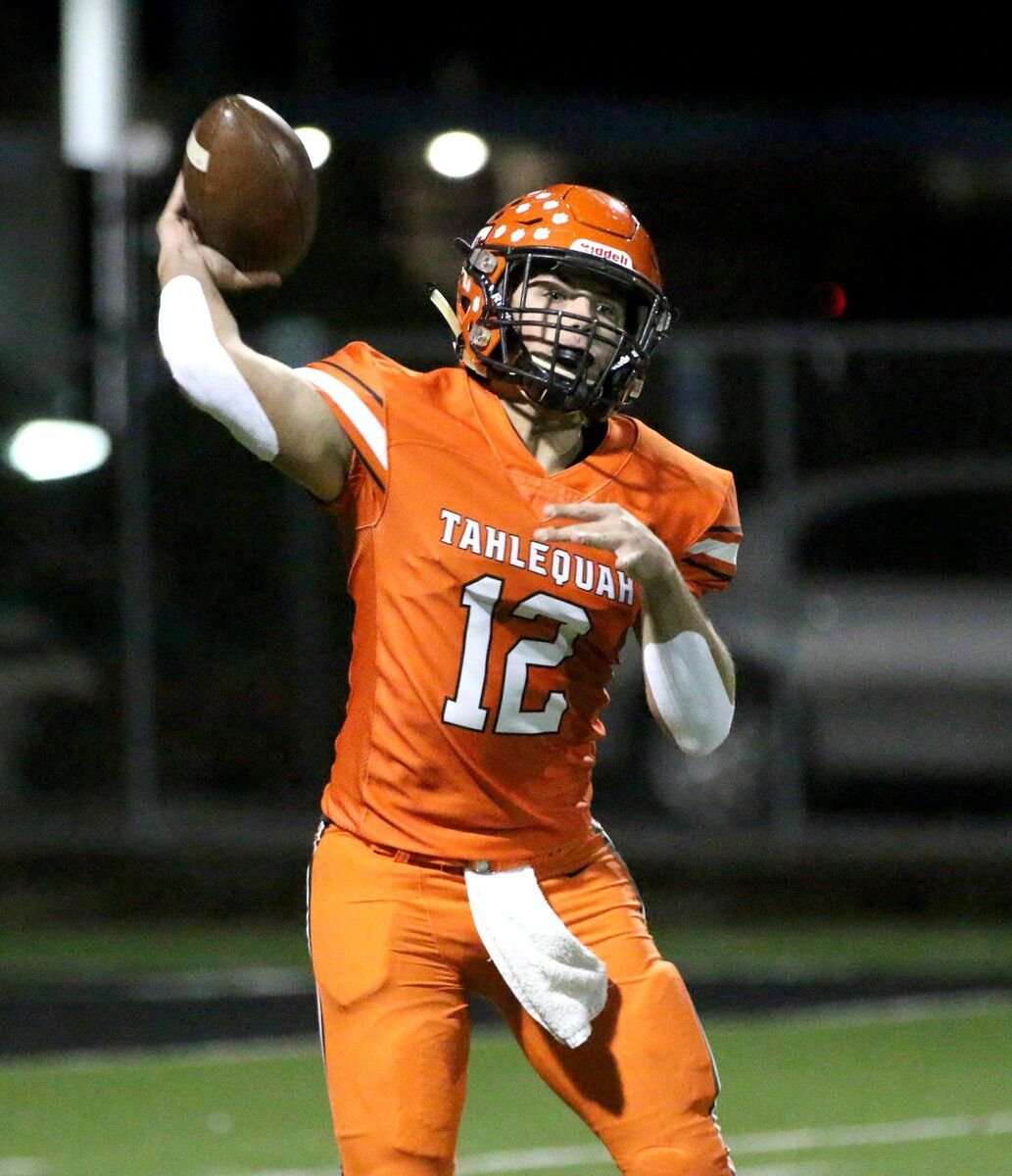 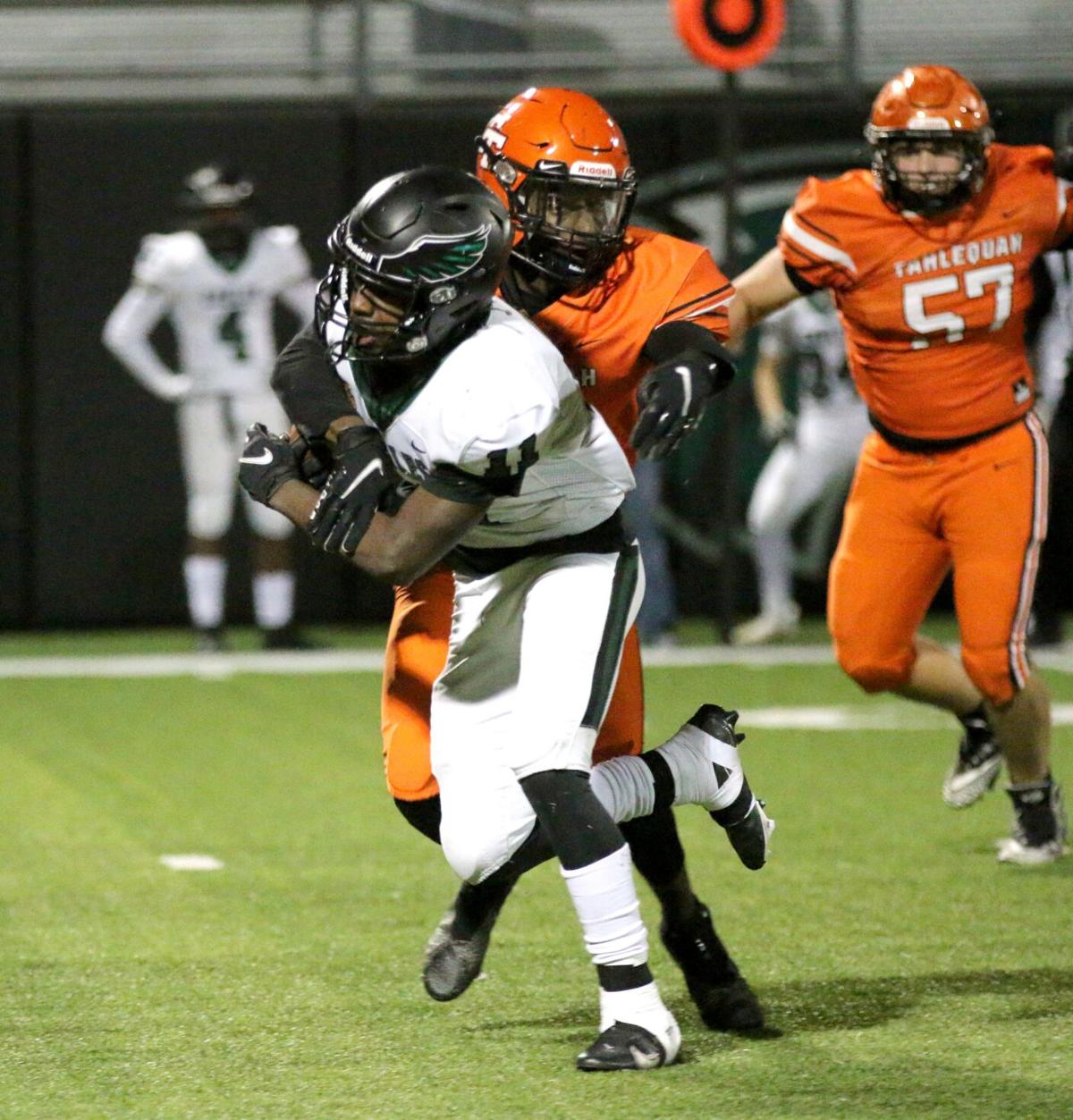 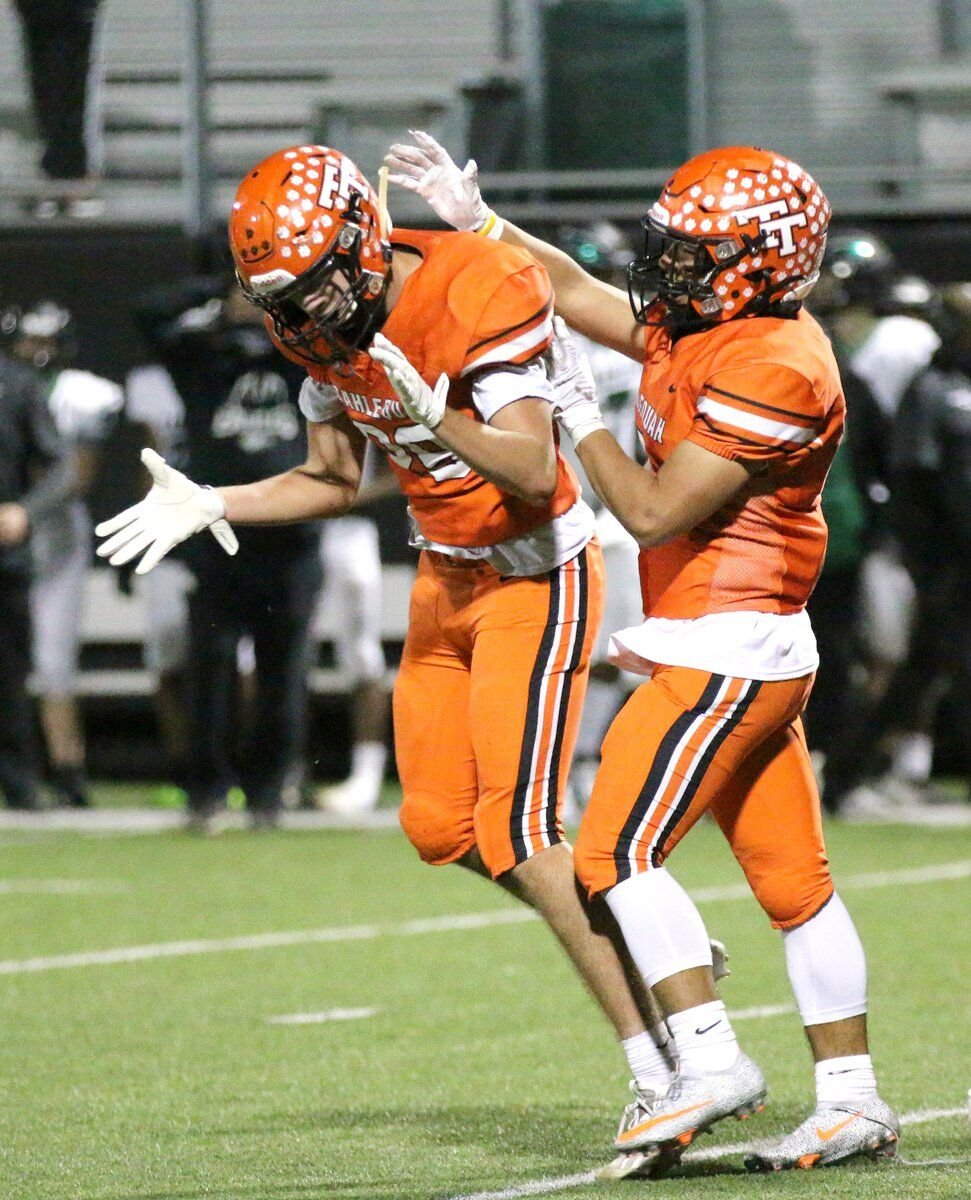 Tahlequah's Shaw Thornton (left) and Angel Quezada celebrate after Thornton had a tackle for loss Friday against Tulsa Edison at Doc Wadley Stadium.

Tahlequah's Shaw Thornton (left) and Angel Quezada celebrate after Thornton had a tackle for loss Friday against Tulsa Edison at Doc Wadley Stadium.

Tahlequah had just enough to outlast Tulsa Edison Friday in the opening round of the OSSAA Class 5A Playoffs at Doc Wadley Stadium.

Senior defensive back Qua’shon Leathers had an interception in the end zone with 59 seconds left to help the Tigers secure a 34-29 win and advance to play Bishop Kelley next week.

Tahlequah, who moves to 6-4, appeared to have control in the first half and took a 21-0 lead into halftime, but the second half became a back-and-forth battle until the very end.

Edison, who finishes its season at 3-7, refused to go away and got to within 21-14 in the third quarter on a pair of 1-yard touchdown runs by running back Gerard Thompson. Thompson’s first score came after the first of two pivotal Tahlequah turnovers.

The Tigers quickly took the momentum back on a Carson Ferguson 86-yard kickoff return for a touchdown with 2:04 remaining in the third, and then extended their lead to 34-14 early in the fourth on a Tyler Joice 3-yard touchdown pass to Tanner Christian that was set up by a Parker Lane interception.

The Eagles had another surge in the fourth quarter that was started by a Kevin Shaw 90-yard kickoff return for a TD. The Eagles then got to within 34-27 when defensive lineman Iman Oates returned a Joice fumble 57 yards for a score with 9:07 left.

“I’m proud of our guys for hanging in there and finding a way to win, even though it seemed like we tried to give it away,” Gilbert said. “I’m proud of them for making the plays when we needed them. I thought Carson’s kickoff return was great and Qua’shon’s interception there at the end of the game was big.”

Tahlequah junior running back Malik McMurtrey started the scoring with a 6-yard touchdown run at the 4:24 mark of the first quarter. The Tigers went up 14-0 on a Joice 1-yard TD run and a Kobey Baker run for a two-point conversion, and extended their lead to 21-0 with 1:00 remaining in the first half on a Joice 35-yard TD pass to McMurtrey.

Tahlequah finished with 227 total yards of offense. Joice completed 7 of 15 passes for 106 yards, Baker led with 49 yards rushing, and Leathers led with 42 yards receiving. McMurtrey added 36 yards on the ground, and Joice followed with 28 yards. Baker had a team-high three receptions and finished with 26 yards.

Edison was led offensively by Thompson, who closed with a game-high 144 rushing yards on 34 carries. Quarterback Luke Parish completed 15 of 21 passes for 120 yards, and receiver Luke Hinkle had five catches for 70 yards.

“Just getting another opportunity to be with these young men, that’s what we love to do and that’s what we’re excited about,” Gilbert said. “We get another week, and that’s all you can ask for as a coach and a coaching staff. It’s been fun, and we’re going to go make the most of our opportunity.”