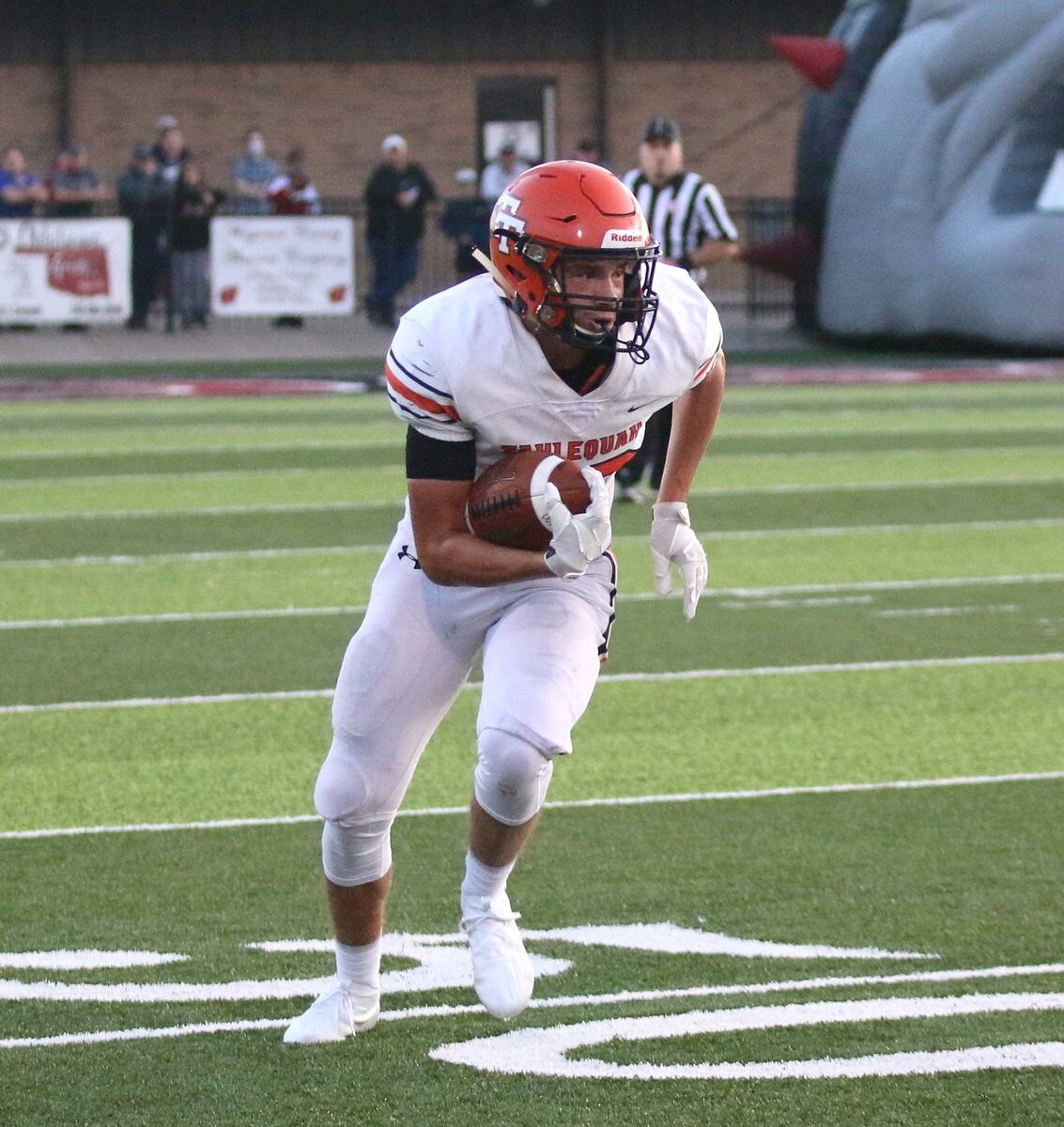 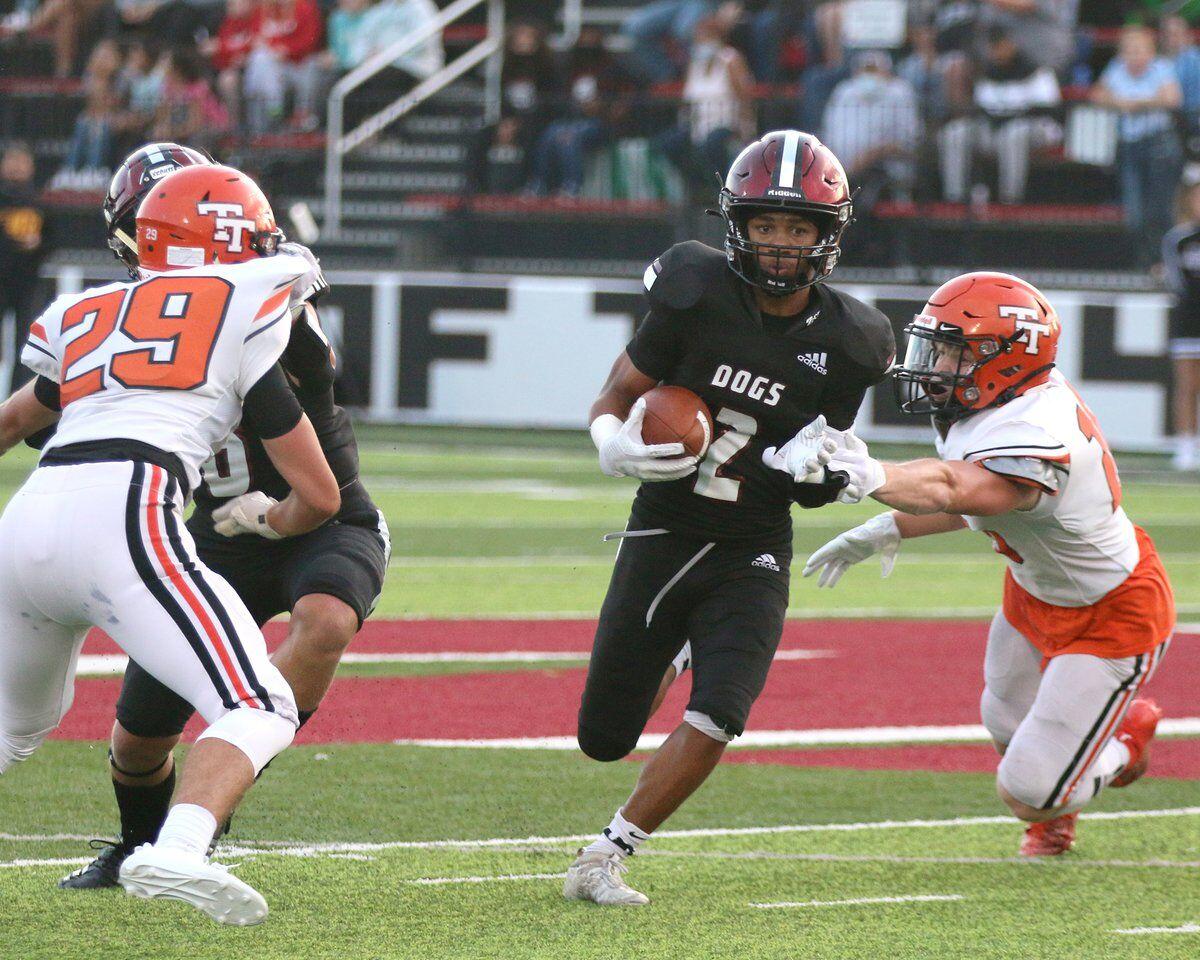 Tahlequah senior safety Kobey Baker tries to bring down Wagoner's Jamon Davis during the first half last week in Wagoner.

Tahlequah senior safety Kobey Baker tries to bring down Wagoner's Jamon Davis during the first half last week in Wagoner.

Tahlequah’s week three matchup will have a new look on Friday.

For the first time in 13 years, the Tigers won’t see Sallisaw on week three of their schedule after the Black Diamonds were placed in COVID-19 quarantine. Instead, they will face McAlester in their final non-district game in a 7 p.m. kickoff at Doc Wadley Stadium.

Tahlequah, coming off a 22-10 road loss to Class 4A top-ranked Wagoner, enters at 1-1. The Tigers opened the season with a 27-2 victory over Tulsa McLain at Doc Wadley Stadium on Sept. 4.

McAlester goes into the contest at 2-0 with wins over Broken Bow and Shawnee. The Buffaloes defeated the Wolves, 34-13, last week.

Although disappointed in last week’s outcome, Gilbert was pleased with the fight.

“The overall competitiveness that our kids showed...I mean they competed,” Gilbert said. “As a coach you want to see that. They never backed down and stood toe to toe with a very good Wagoner football team. There’s a lot that we learned about ourselves as much as anything. We’re not about moral victories here. We want to win football games and we expect to win every game that we’re in.”

The Tigers struggled to generate much offense last week, especially in crucial moments, and were sloppy and inconsistent in week one.

“We just didn’t execute when we needed to offensively,” Gilbert said of the performance against Wagoner. “You just have to maximize those opportunities when you get a chance, especially against good quality football teams. We’ve still got a lot of work to do offensively.”

Defensively, Tahlequah has been sound in both weeks. The Tigers, who didn’t allow any points for six straight quarters, have six takeaways and are allowing just 125.5 total yards per game.

Gilbert was once again impressed with the play of his defense in week two.

“More so than anything, what I took from it was how good our defense played,” Gilbert said. “We held Wagoner to 184 total yards of offense on 56 snaps. If you would have told us those stats, then we’ve got a chance to win.”

Junior quarterback Tyler Joice has completed 23 of 36 passes (64 percent) for 203 yards with a pair of touchdowns and two interceptions. Joice also has a rushing touchdown and threw for 132 of his yards against Wagoner.

The ground game never could never get on track last week as the Tigers finished with minus (-25) yards. They were without starting running back Malik McMurtrey, who rushed for 137 yards on 24 carries with a touchdown against McLain in the season opener.

Senior receiver Kobey Baker leads all receivers with 12 receptions for 100 yards and a score. Senior Tanner Christian has four catches for 37 yards, including a TD.

McAlester is led offensively by a pair of sophomore running backs in Erik McCarty and Dakota Moton. McCarty has rushed for 278 yards, averaging just under 11 yards per carry, and Moton has added 142 yards on 17 carries with a score.

Senior receiver Gavin Johnson has six receptions for 148 yards, and junior quarterback Trent Boatright has completed 8 of 13 passes for 108 yards with a touchdown.

On defense, the Buffaloes have forced five turnovers and are led by junior middle linebacker Chase Faber’s 35 total tackles.