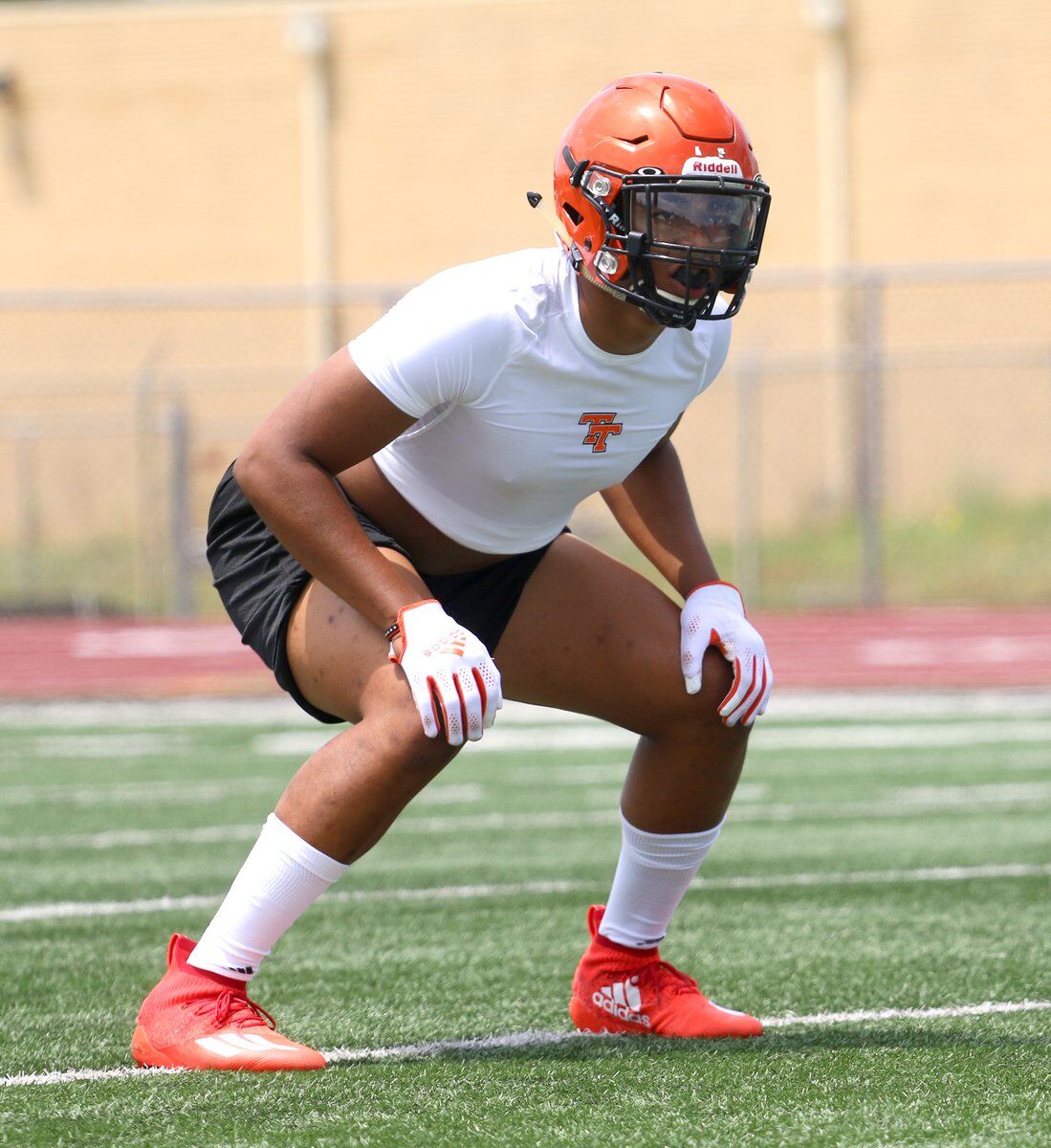 Tahlequah linebacker Eli McWilliams lines up pre-snap during the Muskogee Passing League in June 2021. McWilliams signed a National Letter of Intent with Tulsa on Wednesday. 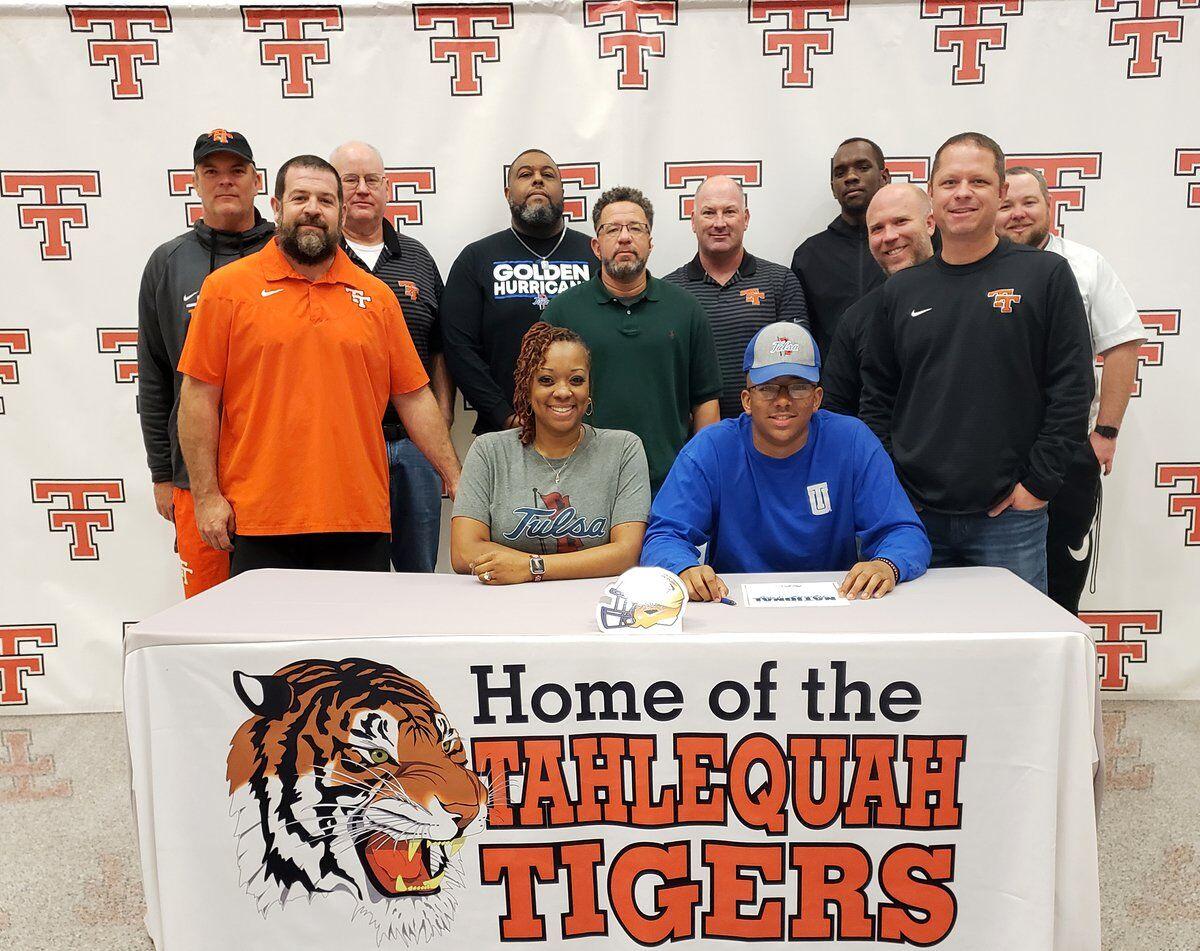 Tahlequah senior linebacker Eli McWilliams signed a National Letter of Intent with the University of Tulsa Wednesday at the TMAC.

Tahlequah linebacker Eli McWilliams lines up pre-snap during the Muskogee Passing League in June 2021. McWilliams signed a National Letter of Intent with Tulsa on Wednesday.

Tahlequah senior linebacker Eli McWilliams signed a National Letter of Intent with the University of Tulsa Wednesday at the TMAC.

McWilliams signed a Letter of Intent with the University of Tulsa at the Tahlequah Multipurpose Activity Center, becoming the first Tiger to sign on the D-I level since Clint Rountree (Tulsa) and Chris Polson (Navy) in 2001.

McWilliams transformed from a cornerback to a linebacker when he arrived at Tahlequah as a sophomore. He sat out his sophomore year after moving from Jenks. After a productive junior season, he missed nearly his entire senior season after suffering a season-ending knee injury in week two against Wagoner at Doc Wadley Stadium.

“When he showed up here he was probably 5-foot-11, but he just continued to grow and mature,” Tahlequah head coach Brad Gilbert said. “By the time his junior year rolled around, in a matter of six months, he had developed into the size that he is.

“One of our first conversations that I will always remember was he was willing to play whatever position we put him at. He told me that. He just wanted to play. He found a spot at linebacker and we were fortunate to have him.”

“I came in here with expectations of playing outside linebacker and Coach [Brad] Gilbert told me he needed to play inside linebacker, so I told him I would play it,” McWilliams said. “I came into my junior year with kinda my hair on fire. I didn’t know what I was doing and I got yelled at a lot, but I just played hard and it ended up turning out the best for me. It was unfortunate that I couldn’t play my senior year, but things happen.”

“His best games were about to come,” Tahlequah defensive coordinator Keith Wilson said. “We were only in week two when he got hurt and he was still very raw. He was still learning the game, but he was coming right along.

“With him getting hurt, he got to sit back…sometimes getting to sit back and see what’s going on and looking from the outside…I think he still learned quite a bit on how to play the game.”

“I had some other offers, but I really loved the way all the [Tulsa] coaches interacted with me,” McWilliams said. “I really loved the atmosphere and being home. Tulsa was just the school for me. I felt it was the better school out of all the offers I had.”

“Whenever I talked to all the college coaches that were recruiting him…he had, I think, six or seven offers on the Division I level…they just liked his raw talent,” Gilbert said. “They liked the idea that he had only played linebacker for one season ever in his career.

“He was going to blossom even more in his senior year when it came to the position and just his overall ability in understanding knowledge wise. Obviously that was cut short early in the season on our first defensive possession against Wagoner.”

The Golden Hurricane are currently without a defensive coordinator after Joseph Gillespie’s recent exit to Texas Christian. Tulsa is currently 6-6 overall and went 5-3 in the American Athletic Conference under head coach Philip Montgomery. The Golden Hurricane will play Old Dominion in the Myrtle Beach Bowl on Monday, Dec. 20.

“[Tulsa’s] going to get a long, rangy, athletic…a guy that is going to be very ready to play,” Wilson said. “He’s going to be extremely hungry. He needs to get that knee healthy and get in shape, and I’m sure Tulsa is going to put together a plan for him in the offseason.”

In his only full season with the Tigers as a junior, McWilliams recorded 65 total tackles, four tackles for losses, one quarterback sack, two quarterback hurries, one interception and one fumble recovery. He collected a career-high 10 tackles and had a tackle for loss against McAlester. In 2021, he had nine tackles in just over a full game.

“Just watching him perform, especially his junior year, he was extremely raw but eager and hungry,” Gilbert said. “He embraced the position, but also liked the idea of playing linebacker.”

McWilliams is the 16th Tahlequah football player under Gilbert to sign a letter of intent.