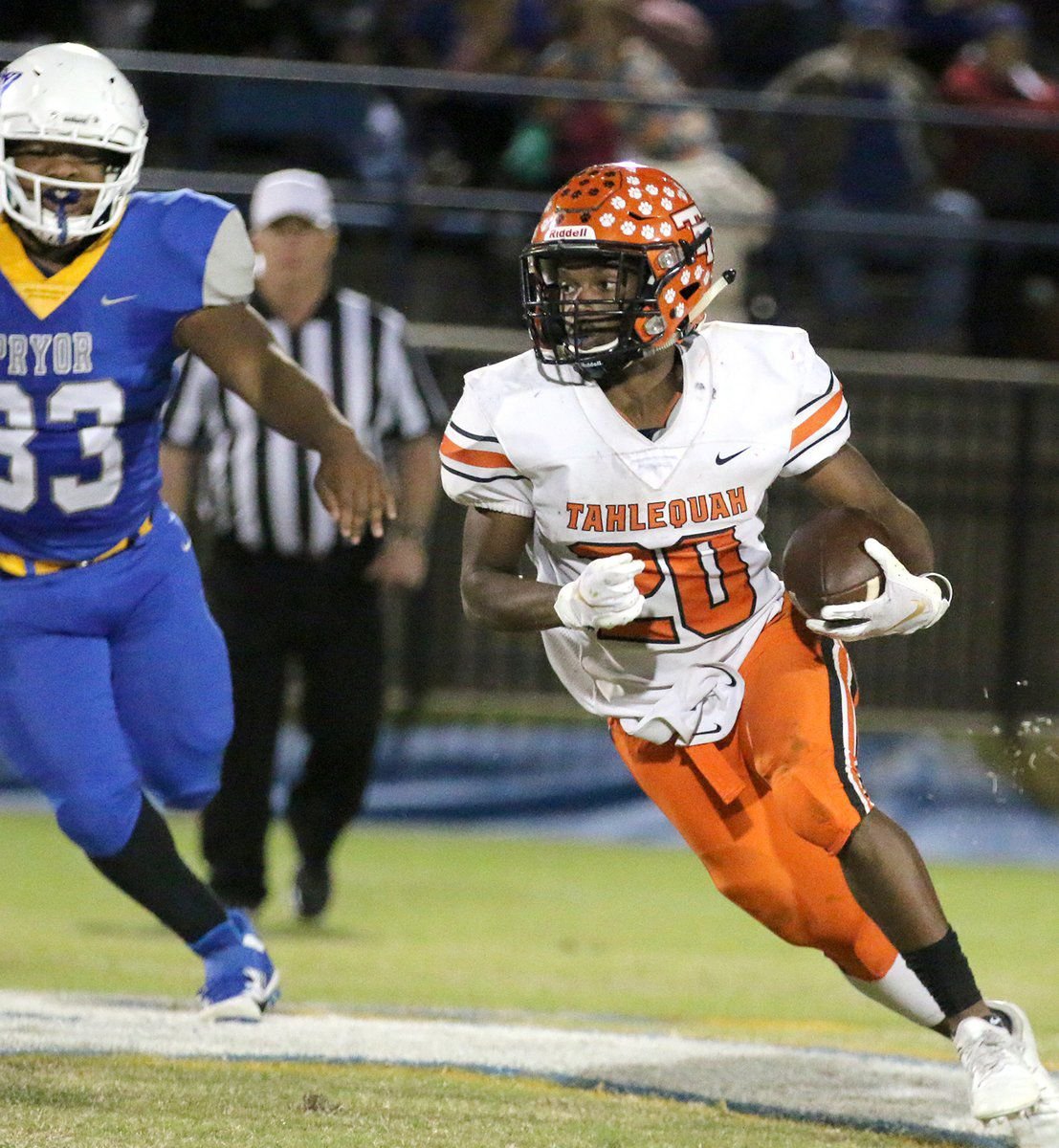 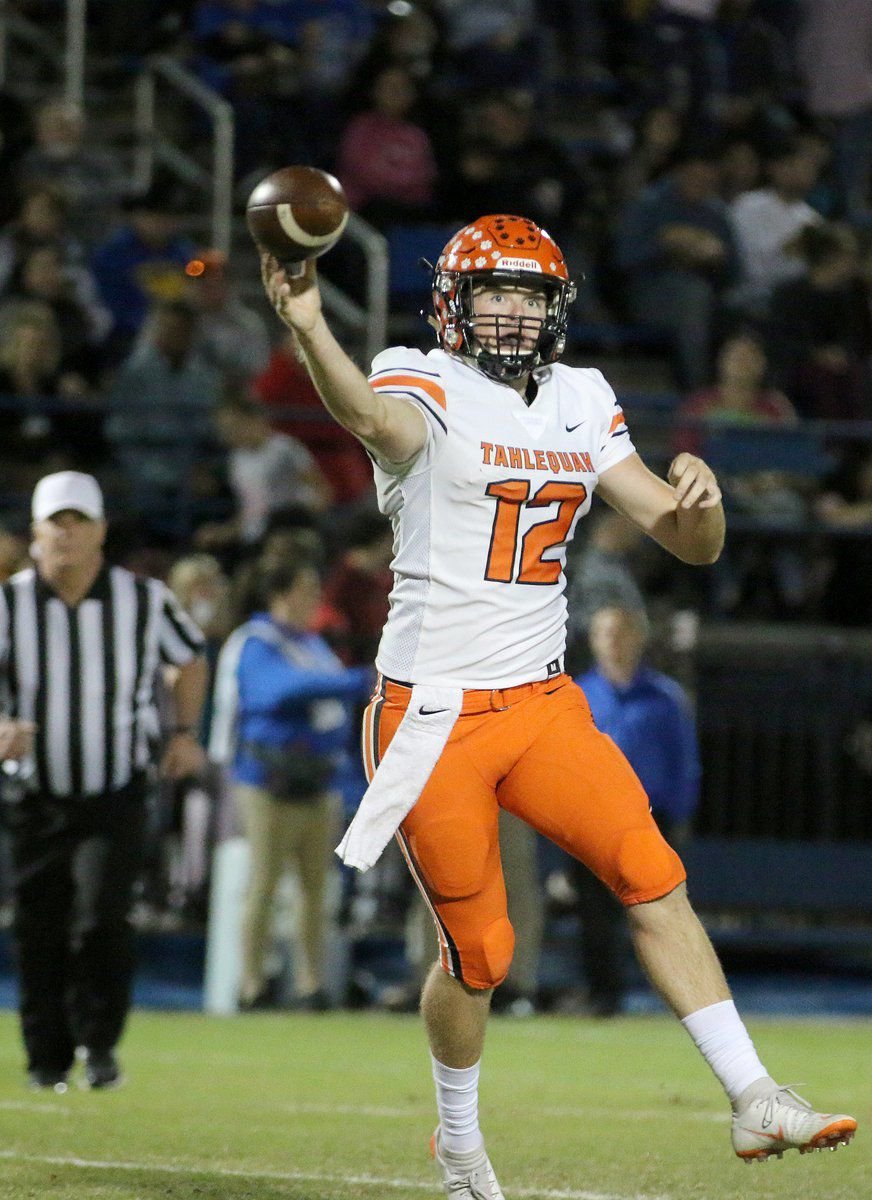 The No. 3 Tigers were plain and simply dominant from start to finish in a 58-13 win at eighth-ranked Pryor.

Tahlequah, who stays unbeaten at 7-0 and moves to 4-0 in District 5A-4, played like they had a point to prove even after consecutive come-from-behind wins over Skiatook and sixth-ranked Collinsville the previous two weeks.

It was the most complete performance of the season.

"We put a complete game together," said Tahlequah head coach Brad Gilbert. "That's what we talked about. We had an opportunity that we haven't had before, being 6-0 and having a chance to go 4-0 in district play. We wanted everybody to understand that we were coming here for a reason. Those seniors and those veteran football players took that to heart."

"A lot of people doubt us, but it just fuels the fire," Tigers' senior defensive end Blake Corn said. "We just have to keep going. It fuels us to go hard. Everybody's always doubted Tahlequah. I've been here so long, so I just want to prove that we've got something here. We've got a program that's really prestigious and we're trying to prove that every day."

The Tigers set the tone from the get-go by scoring on their first offensive snap when senior quarterback Tate Christian threw a 49-yard touchdown pass to receiver Tristan King.

Christian and King later hooked up again on a five-yard TD to make it 35-6 at halftime and erase any hope Pryor had.

"We had a good week of practice, a good week of preparation and we came out here and did what we did tonight," Gilbert said. "It speaks volumes to them, volumes to our coaching staff. I can't be more pleased and more blessed with the guys I have to work with every day."

The Tahlequah defense, led by Corn and senior linebacker Dylan Parish, held Pryor's prolific offense in check throughout. Pryor, who entered the game averaging 354 total yards and 38 points, finished with a season-low 138 total yards of offense. Tahlequah forced five punts, one turnover and limited Pryor to 3 of 12 on third down conversions.

"Pryor, to us, probably had the best offense we've played this year," Gilbert said. "We were concerned going in, but we came out and made a lot of plays. It was great to see. We thought we had that in us and it was good just to see. It started with the defense tonight. They set the tone."

"We just played our hearts out," Corn said. "We preached all week that we had our 9-5-9 down. They like to spread you out so much, so we knew we had to make open field tackles, but they had to be hit by somebody else at the same time. They had to be hit by multiple people every time they got the ball."

In between Christian's touchdown passes to King, Tahlequah received TD runs of one yard and 43 yards by standout running back Dae Dae Leathers. His 43-yard sprint put the Tigers up 21-6 at the 8:38 mark of the second quarter. Leathers went on to rush for a game-high 207 yards on 22 carries.

Kobey Baker extended the Tahlequah lead to 28-6 on a five-yard scoring run with 3:23 remaining in the first half.

The Tigers continued the onslaught right right away in the third quarter. Christian threw his third TD pass, a 29-yard strike to Jaxon Jones to push the lead to 41-6 at the 9:13 point.

Leathers added a four-yard touchdown run to make it 48-6 with 6:16 left in the third, and Trae Patrick booted a 28-yard field goal to increase the lead to 51-6 with just over a minute left in the quarter.

Sophomore running back Malik McMurtrey scored the game's final points on a 31-yard TD run with 6:26 remaining in the game.

Christian completed 9 of 16 passes for 142 yards. King finished with three receptions for 69 yards, Baker had three catches for 36 yards, and Jones had a pair of grabs for 33 yards.

Tahlequah closed with 504 total yards of offense, 336 of those on the ground.

The Tigers will return home on Friday, Oct. 25 when they host Tulsa East Central (2-5, 1-3) at Doc Wadley Stadium. Collinsville defeated the Cardinals, 38-6, Thursday night in Tulsa.

Pryor, who had won five straight games going into Thursday, falls to 5-2 overall and 3-1 in 5A-4.