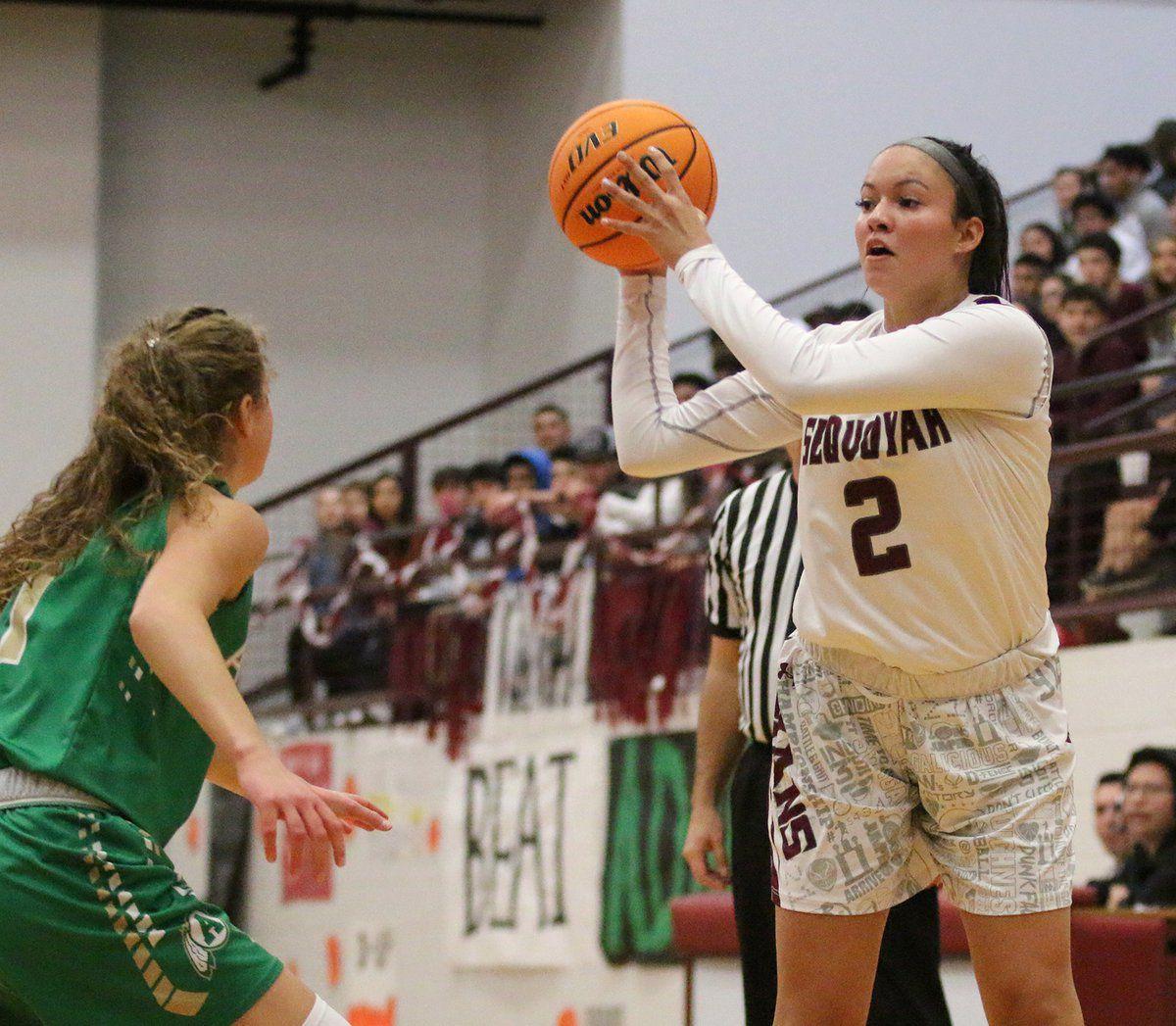 Sequoyah senior Jaide Long looks for an open teammate to pass to Friday against Adair. 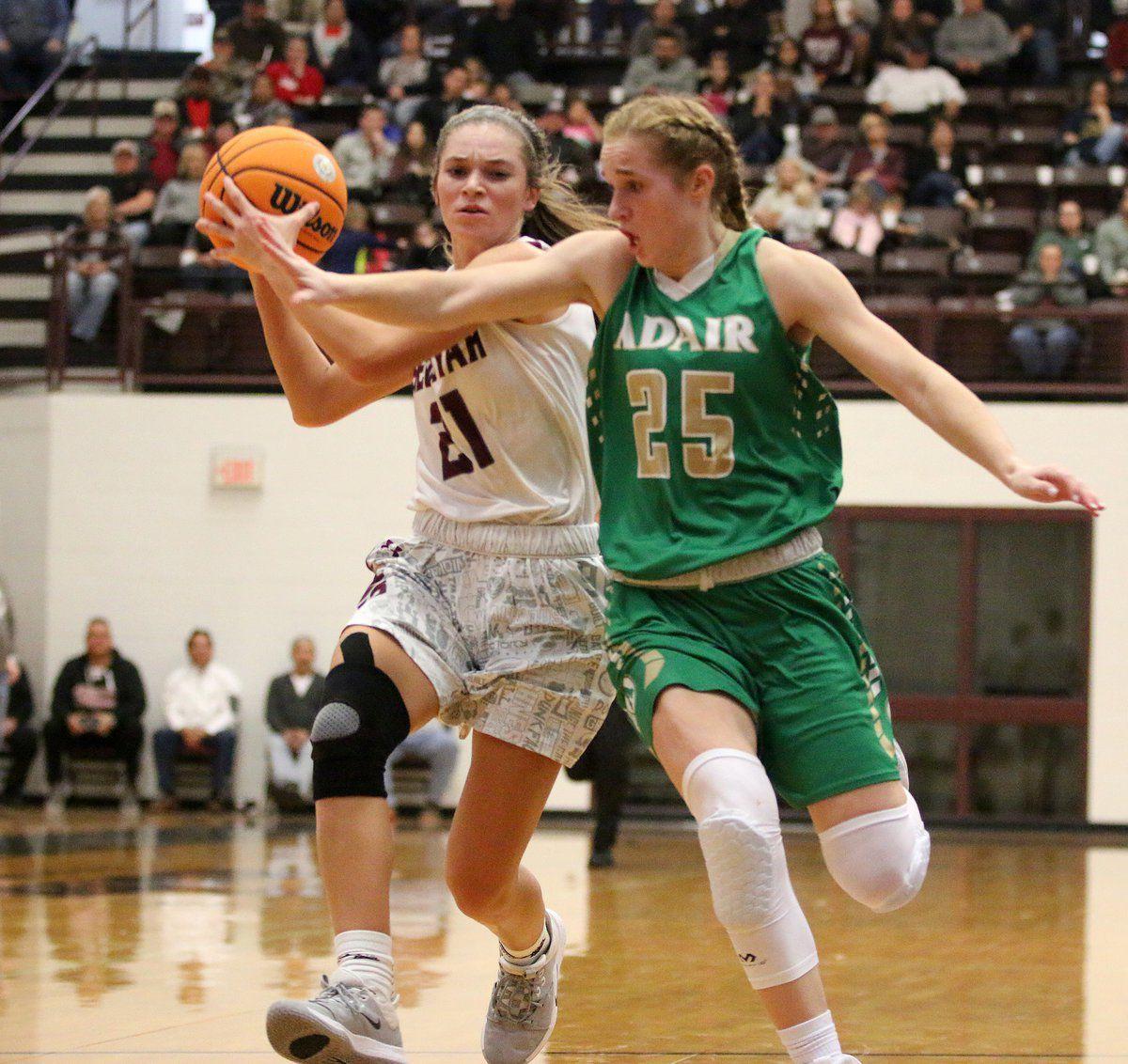 Sequoyah senior guard Lexy Keys gets bumped by Adair's Autumn Hines during the second half Friday at Sequoyah High School. Keys had a team-high 14 points in the Lady Indians' 47-46 win.

Sequoyah senior Jaide Long looks for an open teammate to pass to Friday against Adair.

Sequoyah senior guard Lexy Keys gets bumped by Adair's Autumn Hines during the second half Friday at Sequoyah High School. Keys had a team-high 14 points in the Lady Indians' 47-46 win.

In a battle of Class 3A powerhouses and an early-season top five showdown, third-ranked Sequoyah edged top-ranked Adair, 47-46, Friday night at The Place Where They Play at Sequoyah High School.

Sequoyah got the best of Adair in every matchup last season, including a game during the Area Tournament, but Adair went on to win the Class 3A State Tournament championship. The Lady Indians won state titles the previous two seasons in 2017 and 2018 and are aiming for another this season.

Although it is head coach Justin Brown’s first season with the Lady Indians, he is familiar with Adair from his time coaching at Locust Grove where the teams would play yearly.

“I just think every time you play against Adair you know what you’re going to get,” Brown said. “Their kids are going to play hard, they’re extremely physical and they’re going to be well-coached. Tonight, there was nothing different about that.”

The game was tightly contested from beginning to end with neither team having more than a 10-point lead at a given time. The Lady Warriors earned a 14-8 lead in the first quarter.

However, the Lady Indians went on a 10-point run to start the second quarter, took the lead and never gave it back. The Lady Indians led 25-16 going into halftime.

Jaide Long’s mid-range jumper put the first points on the board two and a half minutes into the final half. The teams scored right after another, not allowing the other team to go on a scoring run until the Lady Warriors went on a five-point run in the final minute to shorten the lead 33-28.

The Lady Warriors continued to fight back in the final quarter. They trailed 45-42 with only 10 seconds left on the clock, but Lady Indians’ Lana Gass sunk a pair of free throws to put the game out of reach. The Lady Warriors made a three-pointer as the clock expired, but fell short.

“I was proud of the way we finished,” said Brown. “It was an ugly game, neither team shot great, especially from the free-throw line, but it was fun to be a part of. Our kids are used to the pressure and they don’t shy away from that stuff. We had some kids step up, play really well tonight, and I couldn’t be more proud.”

The Lady Indians will be at the Cherokee Nation Businesses Tahlequah Invitational next week, starting on Thursday, Dec. 12 when they face Muskogee in a 7 p.m. tipoff.