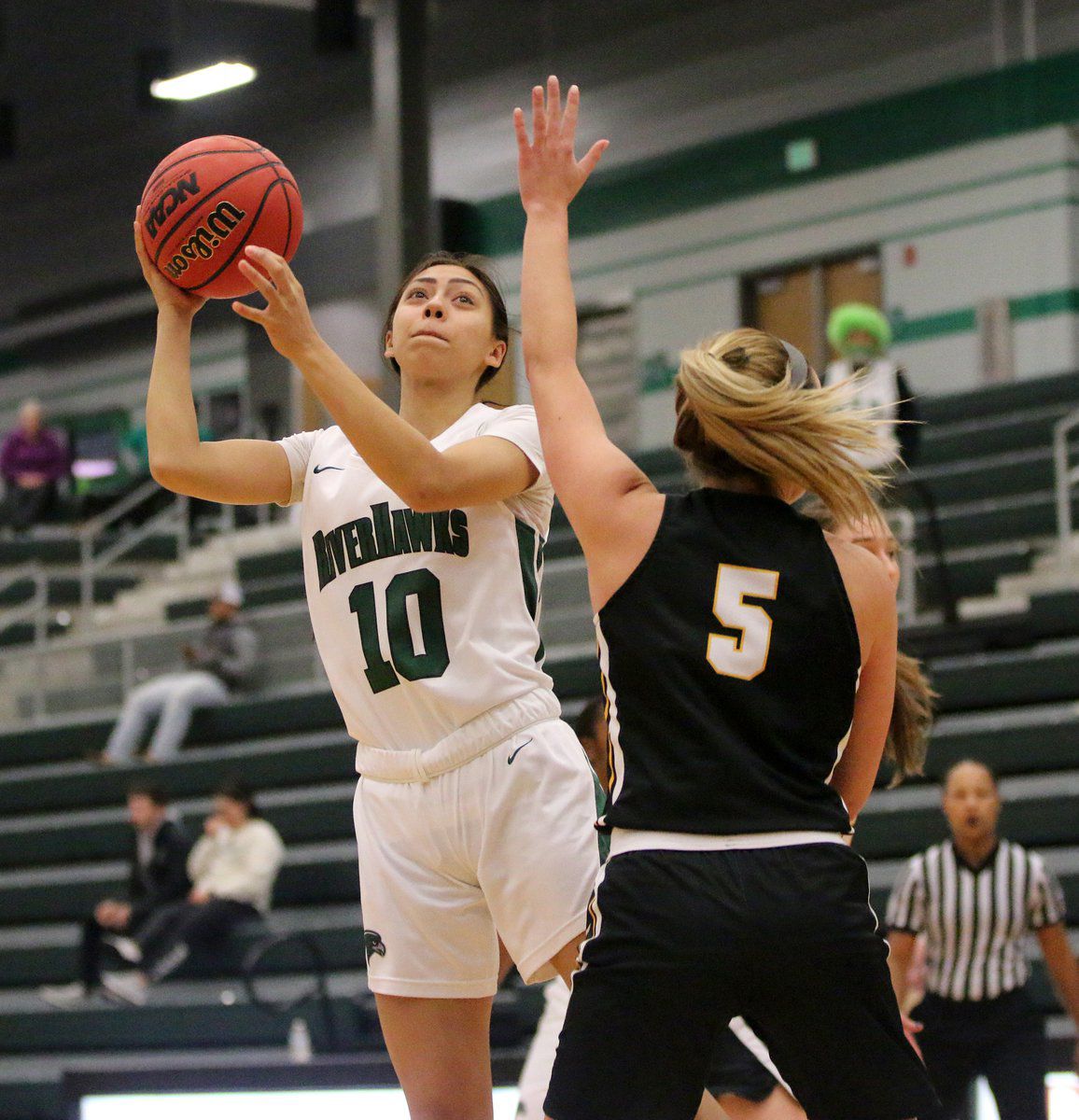 Shae Sanchez had a team-high 14 points for NSU Thursday evening against Fort Hays State at the NSU Event Center. 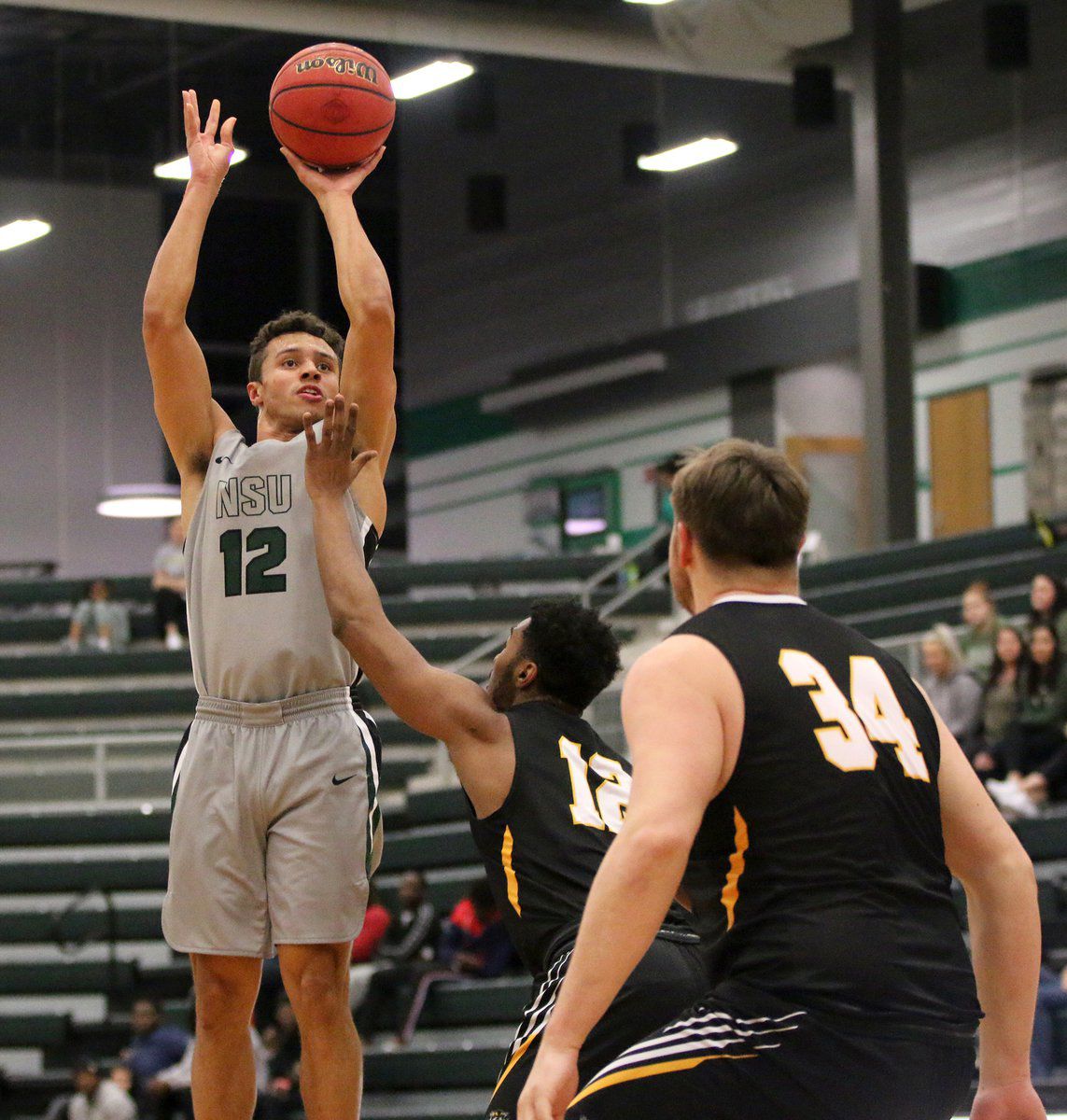 Shae Sanchez had a team-high 14 points for NSU Thursday evening against Fort Hays State at the NSU Event Center.

Kendrick Thompson and Caleb Smith were at it again for Northeastern State on Thursday night.

This time, the guard duo helped the RiverHawks break a four-game losing streak and defeat Fort Hays State, 76-70, at the NSU Event Center.

Thompson dropped in a career-high 29 points, and Smith added 20 as NSU won its 10th game of the season, moving to 10-5 overall and 3-3 in MIAA play under head coach Mark Downey.

Thompson and Smith were right on their combined average of 49 points from the previous two games -- road losses to No. 2 Northwest Missouri State and Missouri Western.

The RiverHawks committed just three turnovers and had 17 assists -- a drastic change from Monday's game at Missouri Western where they had a season-high 20 turnovers and a season-low three assists.

"We needed it. We've been snakebitten a little bit and we just needed to mature and finish a game," Downey said. "That's what we've been talking about, just finish, grow up a little bit and make the plays we need to make. We tried to make it interesting but we made the plays we had to make and hit the free throws we had to make, and I'm proud of the team, especially after we had three assists and 20 turnovers on Monday and we came back tonight with 17 assists and four turnovers, so that's huge for us and then withstanding their barrage of threes."

Thompson had 16 of his points after halftime and canned four of his 3s.

"Kendrick was very efficient," Downey said. "He made some big shots and got us a little bit of a lead late in the game with some of his plays. He's gotta continue to share it and continue to play efficiently, but he's just been huge for us in the last few games."

Thompson put NSU up for good at 56-54 after knocking down a 3 with 8:17 remaining. It was the start of an 8-0 run for both Thompson and the RiverHawks. He later added a jumper and then another trey to give NSU a 61-54 lead with just under seven minutes left.

"I just took what the defense gave me, that's what coach told me to do and I didn't want to force anything and I wanted to take great shots tonight," Thompson said.

Fort Hays State, led by Jared Vitztum's 18 points and seven rebounds, falls to 6-7 overall and 0-5 in the conference.

The RiverHawks will host Nebraska-Kearney in a 3:30 p.m. start on Saturday at the NSU Event Center.

NSU women fall short: Northeastern State was good but not good enough Thursday in a 77-66 loss to 13th-ranked Fort Hays State at the NSU Event Center.

The RiverHawks shot 49 percent overall -- their best game total since shooting 51.4 percent against Bacone on Nov. 13, received 28 points from their bench, and held a 41-40 advantage at the 7:20 mark of the third quarter.

But Fort Hays State went on a 13-2 run and NSU never could recover. The Tigers were lifted by Taylor Rolfs, who scored nine straight points on three 3-pointers, and baskets from Belle Barbieri and Lauryn Reither.

It's the third consecutive loss for the RiverHawks, who slip to 4-9 overall and 2-4 in MIAA play under head coach Fala Bullock.

"I'm very pleased. I was just sharing with the girls that I thought we turned a corner today and responded in the right way," Bullock said. "We've had some great practices, I thought those showed up in today's game. We had a good gameplan that we stuck to for most of the game.

"Fort Hays is a great team and honestly they beat us by 30 a year ago, so to see us be down three points at halftime and stick in there...that third quarter [Taylor Rolfs] got away from us on those transition 3s and that hurt us and we didn't recover from that, but I'm proud of the effort. I thought the team played well together, we made some big baskets and shot it pretty well today. That's a good team. They have great length and I thought we handled a lot of what they did today. It feels good in the sense that I thought my team got better."

NSU's last lead came after an inside score from Cielo McClain. Maegan Lee converted a pair of free throws to get the RiverHawks to within 44-43 with 6:29 left in the third before Fort Hays State went on its surge.

The Tigers, who improve to 12-2 overall and 3-2 in the conference, had three players finish in double figures. Barbieri led with a game-high 18 points, Jaden Hobbs followed with 17, and Rolfs added 16.

The Tigers have now won the last 13 meetings.

The RiverHawks will remain at home Saturday in a 1:30 p.m. tipoff against Nebraska-Kearney.