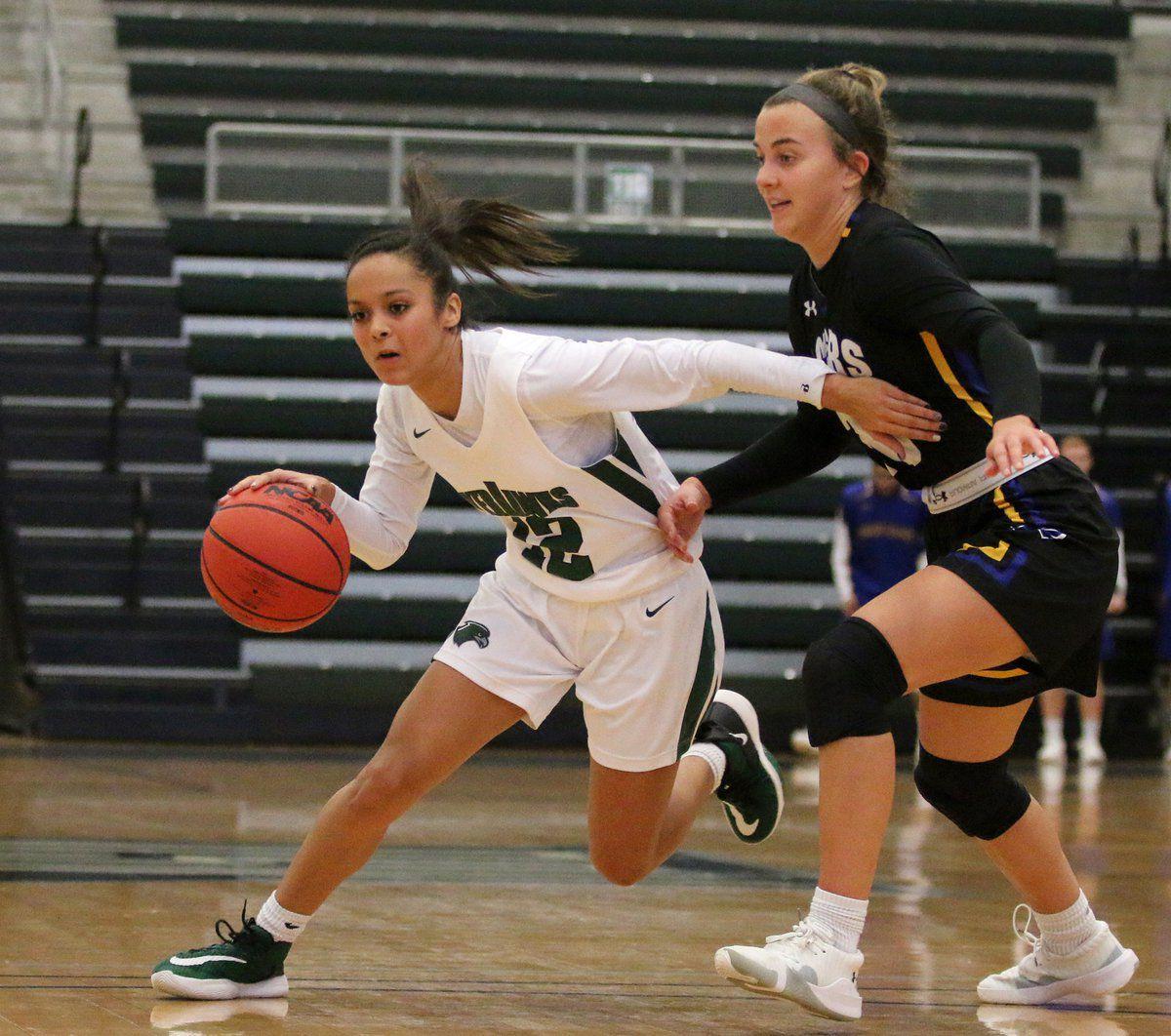 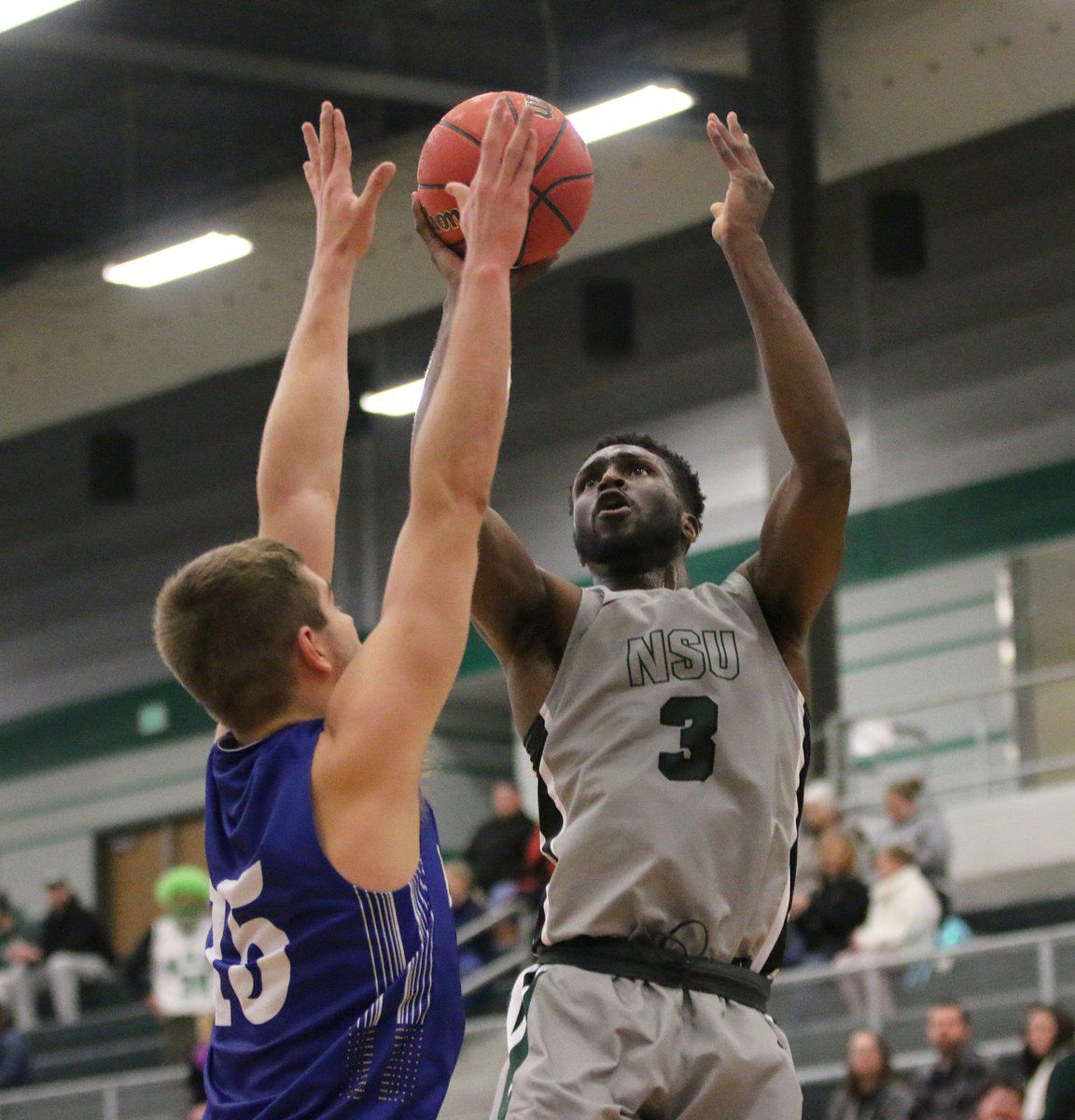 Northeastern State forward Josh Ihek recorded his third double-double of the season with 12 points and 10 rebounds on Saturday against Nebraska-Kearney at the NSU Event Center.

Northeastern State forward Josh Ihek recorded his third double-double of the season with 12 points and 10 rebounds on Saturday against Nebraska-Kearney at the NSU Event Center.

Nebraska-Kearney overcame a 13-point deficit in the second half and defeated Northeastern State, 83-79, in overtime Saturday at the NSU Event Center.

The loss is the fifth over the last six games for the RiverHawks, who fall to 10-6 overall and 3-4 in MIAA play under head coach Mark Downey.

NSU’s last lead came after Kendrick Thompson knocked down a 3-pointer with 1:36 left in overtime. It was the third 3 of the contest for Thompson, who led all scorers with 22 points.

Thompson sent the game in overtime, following a pair of free throws with 30 seconds remaining. Nebraska-Kearney’s Kyle Juhl misfired on a 3-point attempt as time expired in regulation.

But the Lopers stormed back with a 13-0 run to take their first lead of the contest at 52-51 on a Jake Walker basket inside the paint with 10:01 left. Morgan Soucie hit back-to-back 3s and had seven points to lead the surge.

Troy Locke put NSU back on top, 53-52, with a layup at the 9:34 point, and the RiverHawks didn’t trail again until Sam Morris gave the Lopers a 66-65 advantage on a free throw with 1:15 left. AJ Jackson, who led Kearney with 20 points, gave his team a 68-66 edge on an inside score prior to Thompson’s free throws with 30 seconds remaining.

“It's the same thing over and over again, we're one possession away," said Downey. "I didn't do my part either tonight, I got a technical foul. Whether I deserved it or not, I still got one and when you talk about one possession at a time, that's on me as well. I also thought maybe it hurt our momentum a little bit, then we just didn't finish, we turned it over late in the game, we had a lot of opportunities to finish the game and we didn't do it.

The Lopers, now 10-5 overall and 4-2 in conference play, combined to shoot 61.1 percent in the second half and in overtime. They had five players finish in double figures. Joining Jackson were Soucie with 18 points, Chase Winchester with 15, Walker with 14, and Morris with 13.

"I'm not sure we're as tight as we need to be but hopefully this helps us get tighter and closer together,” Downey said. “I've gotta do a better job and we have to have players step up and do a better job and we've gotta have seniors be seniors. Guys are working hard, they are pouring themselves into it but we've got to be just a little bit better, everybody's gotta be a little bit better."

In their last five setbacks, the RiverHawks have lost by a combined 23 points and two of the losses have come in overtime.

Sanchez didn’t get much help on the offensive end. Leading scorer and backcourt mate Cenia Hayes got into early foul trouble and was held scoreless, and as a team, the RiverHawks were limited to 32.7 percent overall shooting. They connected on just two of their 17 3-point attempts.

Kearney, who shot 47.4 percent overall and outrebounded NSU, 36-27, received a team-high 17 points from Maegan Holt and 14 from Brooke Carlson. Haley Simental was also in double figures with 12 points.

The Lopers led by as many as 25 points on two occasions — Adreon Bell gave them a 67-42 lead on a basket with 56 seconds left, and Shelby Megyeri made it 69-44 on an inside score.

NSU’s last lead was at 10-9 on a layup by Sanchez with 29 seconds left in the opening quarter. The RiverHawks got to within three points (30-27) just seconds into the third quarter after Sanchez scored inside the paint but they couldn’t get any closer.