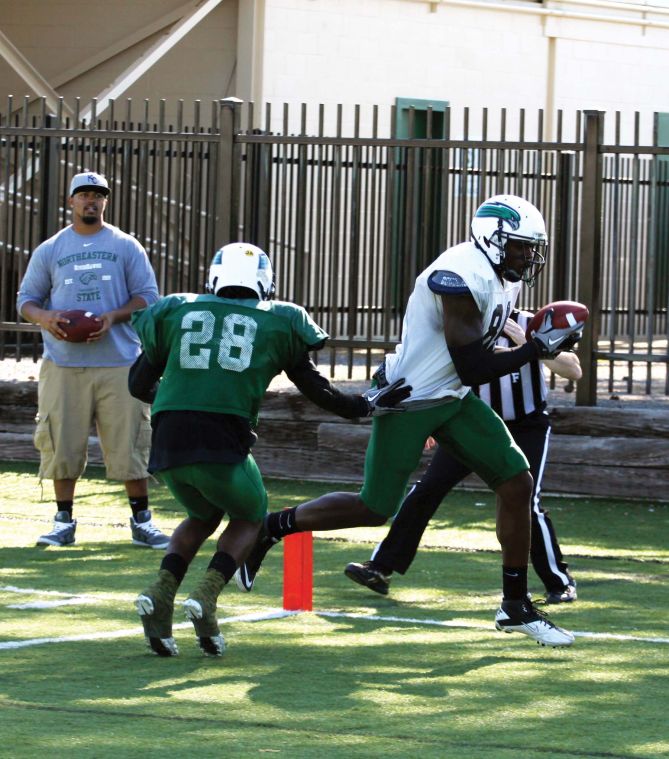 Montra Nelson (right) scores a touchdown during NSU’s Green and White spring game. Nelson will likely be in the starting lineup for the RiverHawks at wide receiver in 2012. 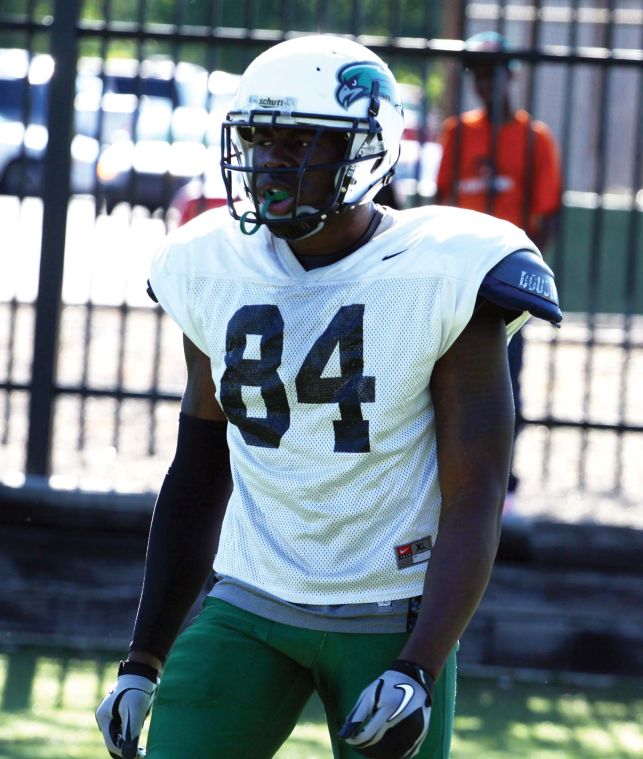 Montra Nelson, a 6-foot-5, 225-pounds wide receiver, will be a key target for the RiverHawks in the passing game in 2012.

Montra Nelson (right) scores a touchdown during NSU’s Green and White spring game. Nelson will likely be in the starting lineup for the RiverHawks at wide receiver in 2012.

Montra Nelson, a 6-foot-5, 225-pounds wide receiver, will be a key target for the RiverHawks in the passing game in 2012.

A roller coaster ride might be the way he describes his 2011 season. There’s no doubt, it was a wild ride of some sort for Montra Nelson.

The 6-foot-5, 225-pound wide receiver arrived on the scene at Northeastern State just a handful of days before the RiverHawks’ first game in 2011. He then suited up for the RiverHawks in their first couple of games before suffering an injury that sidelined him for the majority of the remaining contests.

But, from Nelson’s point of view, it wasn’t a complete waste of a season.

“I was just excited to be back out here,” Nelson said. “It was my first injury, so I wasn’t down on myself or anything. I was just taking my time and getting ready for the spring game.”

Nelson’s initial thrust into a playing role at NSU was necessitated by the fact that he had already redshirted during his time at Oklahoma State. That option wasn’t provided to him once he arrived in Tahlequah.

Nelson is just pleased to playing along side quarterback Johnny Deaton — whom he was with at Oklahoma State — again.

“Johnny left before me, and I got in contact with Johnny and he just talked me into coming here,” Nelson said, recalling how last summer played out. “So, we’re all back here together again.”

Asked if he had any regrets leaving a budding Division I power, Nelson responded with, “there are differences in both, but it’s just football. That’s all that matters.”

As a sophomore this season, Nelson will take on the responsibility of being one of Deaton’s top targets in the passing game, especially with school’s most prolific pass catcher, Trey McVay, now graduated.

“Montra looks like a defensive end out there with huge hands, and he can run by almost anyone on the field when he wants to,” NSU head coach Kenny Evans said. “He battled through a turf toe injury all spring, but still practiced every day. So I don’t think we’ve seen close to what Montra can do on the field yet.”

Nelson will take on a high-profile role and use what he learned from McVay to excel in the spotlight.

“Trey’s a real good receiver, and he put in the work and it paid off,” Nelson said. “He had a spectacular season last year — one of the best I’ve seen since I’ve been playing. So I took some pointers from him in order to be just as good as he is.”

Joining forces with Nelson at receiver will be a host of potential playmakers in Jahmai Coleman, Jermaine Sherman, Chucky Bryant and Gionni Harris. It’s a group Nelson has high hopes for.

“We have a lot of good receiver on this team,” Nelson said. “We can all make plays, and we all have different roles. I just want to show everyone that I can play, since I really didn’t get to last year.”

One key absence for NSU in the pass-catching department of Cruz Williams, a transfer from Louisiana who was not granted a waiver to play right away at NSU. Thus, Nelson will have to try and pick up the slack in the absence of the RiverHawks’ potential No. 1 target in the passing game.

“Hopefully, being in the system for a year now, he feels comfortable with what we’re doing,” Evans said of Nelson. “We do a lot of things with our receivers, so it’s hard for anyone to come right in and have an impact at receiver. So we’re hoping Montra has settled in and will have a big year for us.”