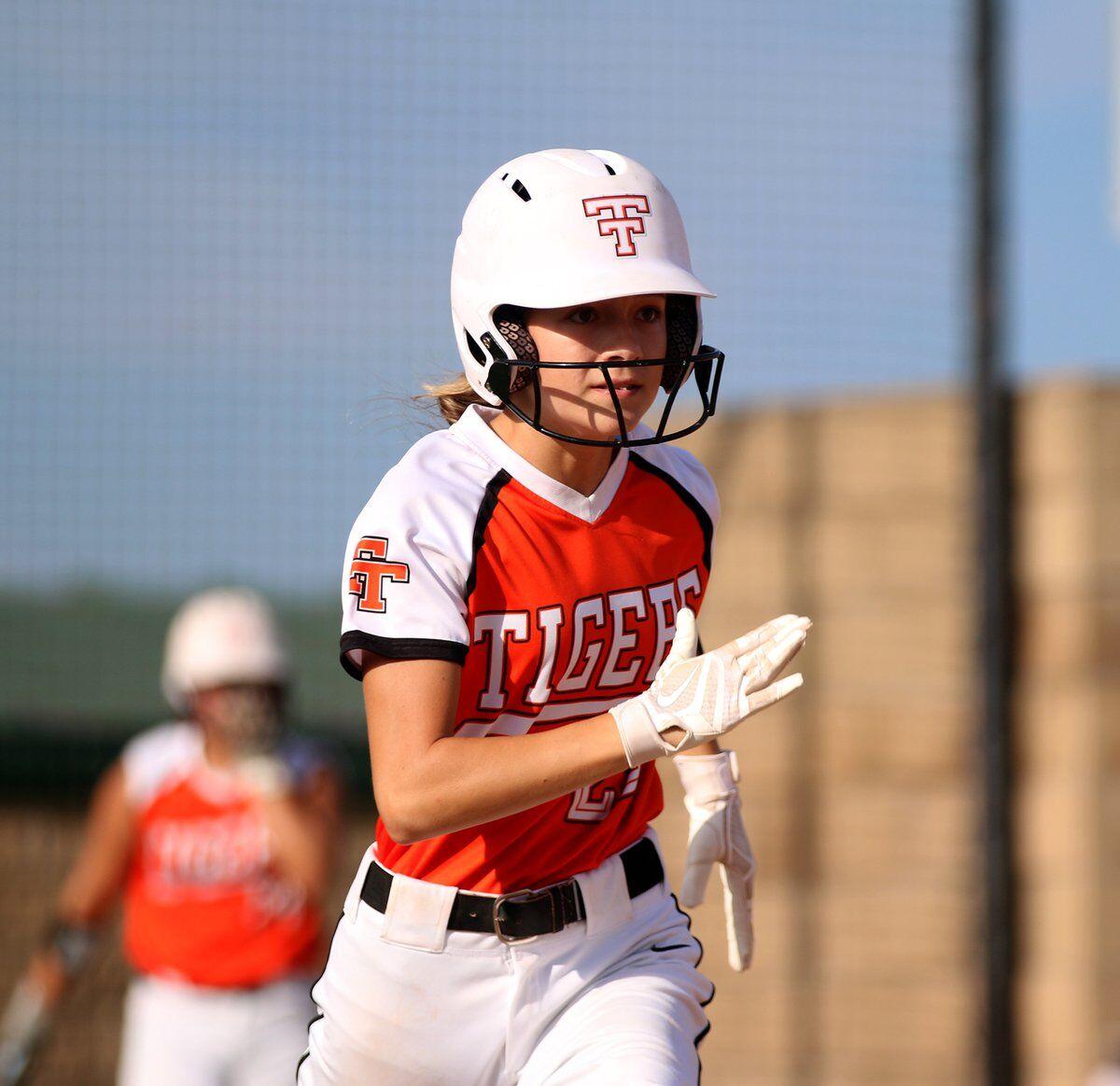 Tahlequah junior Lexi Hannah runs to first base during the first inning Tuesday against Durant. 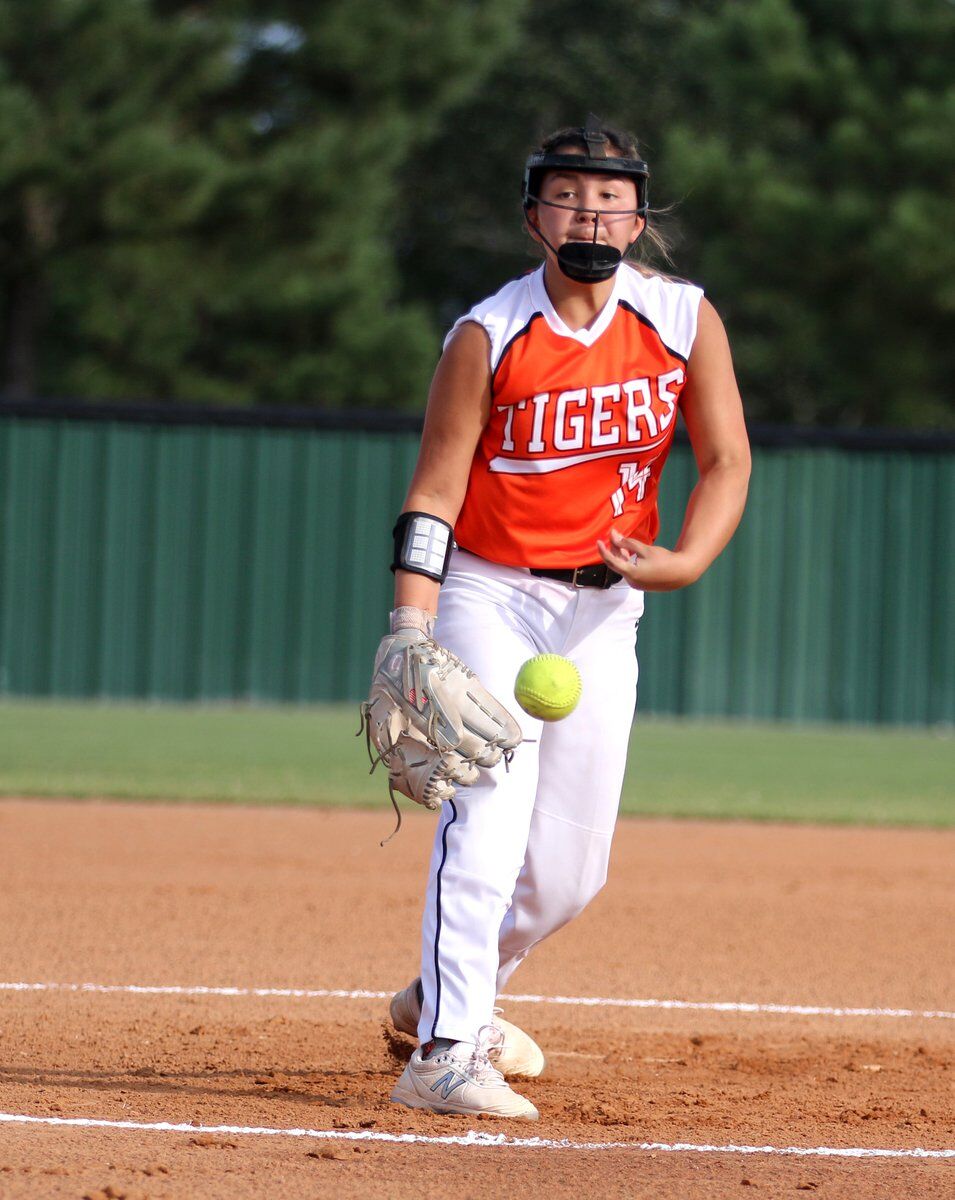 Tahlequah junior Lexi Hannah runs to first base during the first inning Tuesday against Durant.

Tahlequah struggled offensively for a second straight day on Tuesday and suffered a 7-3 home loss to Durant.

Hitting with runners in scoring position was again a nemesis for the Lady Tigers, who fall to 10-8 overall and 6-2 in District 5A-4.

The Lady Tigers, who fell to Glenpool, 4-2, in eight innings on Monday, also finished with just four hits, two of those in the seventh inning where they scored all three of their runs.

“Our approach at the plate isn’t very good right now,” Tahlequah head coach Chris Ray said. “We’re swinging at pitches we should be taking and we’re taking pitches we should be swinging at. I just told the kids you’ve got to be ready to hit every pitch, and a pitcher as good as [Abi] Gregory from Durant, she’s not going to give you a whole lot to hit. You’ve got to be able to hit those borderline pitches. Sometimes we’re committing too early, making up our mind that we’re going to swing before we get in the box.

“It’s a process. It was kind of this way when we started at the first of the season. We’ll work through it and get it figured out.”

The Lady Lions, who closed with 11 hits off Tahlequah pitchers Mikah Vann and Bailey Jones, went to work right away and pushed across single runs in the first, second, third and fourth innings. They then put the contest out of reach with a three-run fifth.

Tahlequah had its chances to scratch across runs in the first three innings, but left a runner stranded at third base each time.

Vann reached on an infield single in the first, and courtesy runner Madi Matthews advanced to second on a Mia Allen groundout and to third on a stolen base, but Hailey Enlow ended the scoring threat on a groundout.

In the second, Jayley Ray got aboard on a one-out infield single, moved to second when Paisley Qualls grounded out and advanced to third on a passed ball before Mykayla Hayes went down on strikes.

Hannah got to third base in the third after getting aboard on an error, stealing second and moving to third on a passed ball. Allen was then retired for the final out on a ground ball.

The offense finally showed life in the seventh, although it was too late. Enlow started with a triple to right field and scored the Lady Tigers’ first run when Charlea Cochran reached on an error. Ray then drove in Cochran with a double to left, and Ray crossed home plate on a Qualls’ groundout.

For the second consecutive day, Ray paced the lineup with a 2 for 3 performance at the plate.

In a starting role from the pitcher’s circle, Vann gave up four earned runs on nine hits in 4.2 innings of work. The sophomore finished with one strikeout and walked one. In relief, Jones did not allow a run and gave up two hits.

Abi Gregory, Kalin Beller and Aubrey Tomlinson each had two hits to pace Durant, who improves to 11-6 overall and 6-1 in district play. Bellamy Knight drove in a game-high two runs.

In the circle, Gregory went the distance to earn the win. Gregory allowed one earned run on four hits, recorded nine strikeouts and did not issue a walk.

The Lady Tigers will next play in the Tahlequah Festival on Thursday and take on Oktaha in the festival opener at 11 a.m.