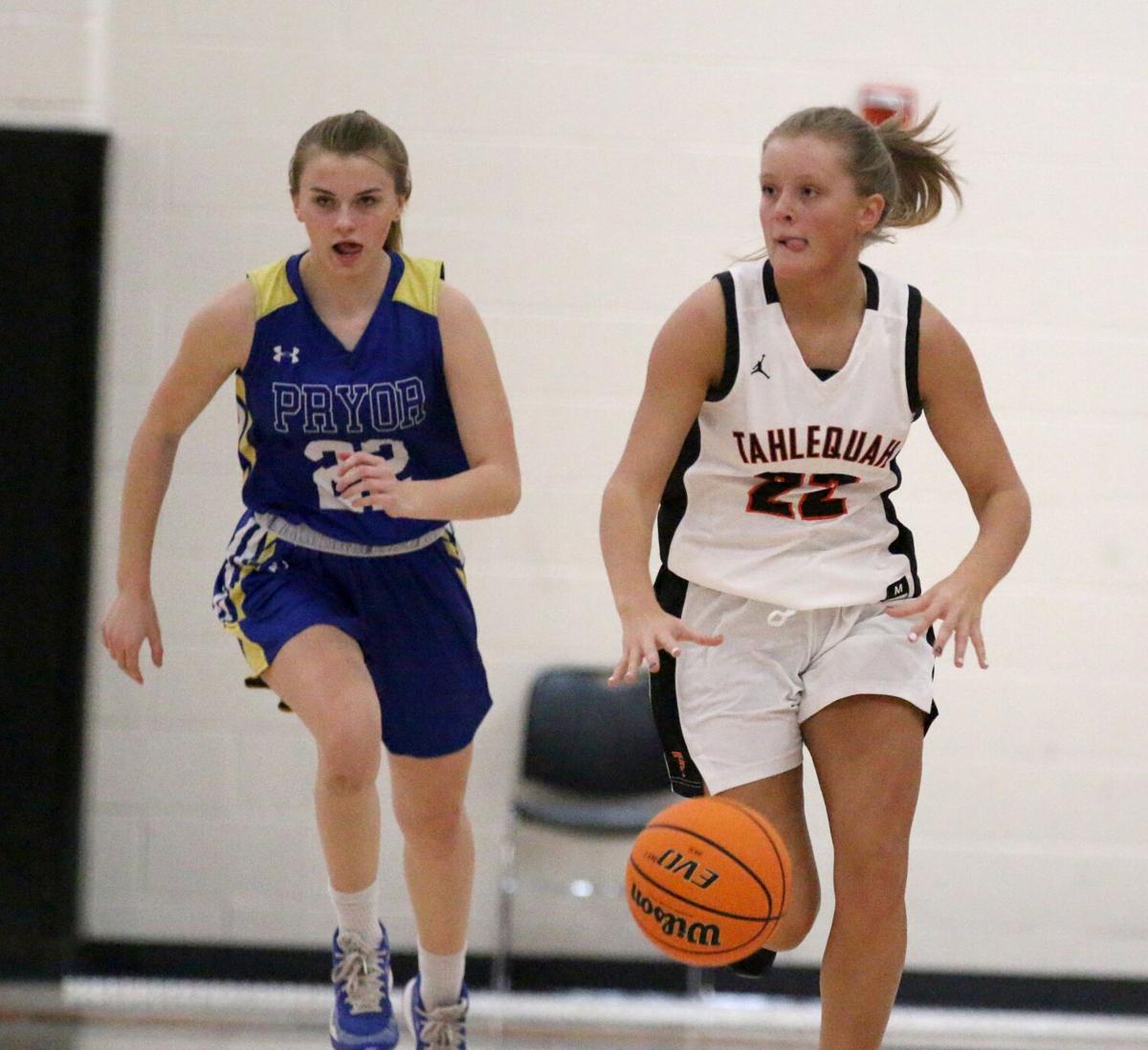 Tahlequah junior Lydia McAlvain, shown here against Pryor on Feb. 2 at the TMAC, is averaging 7.6 points. 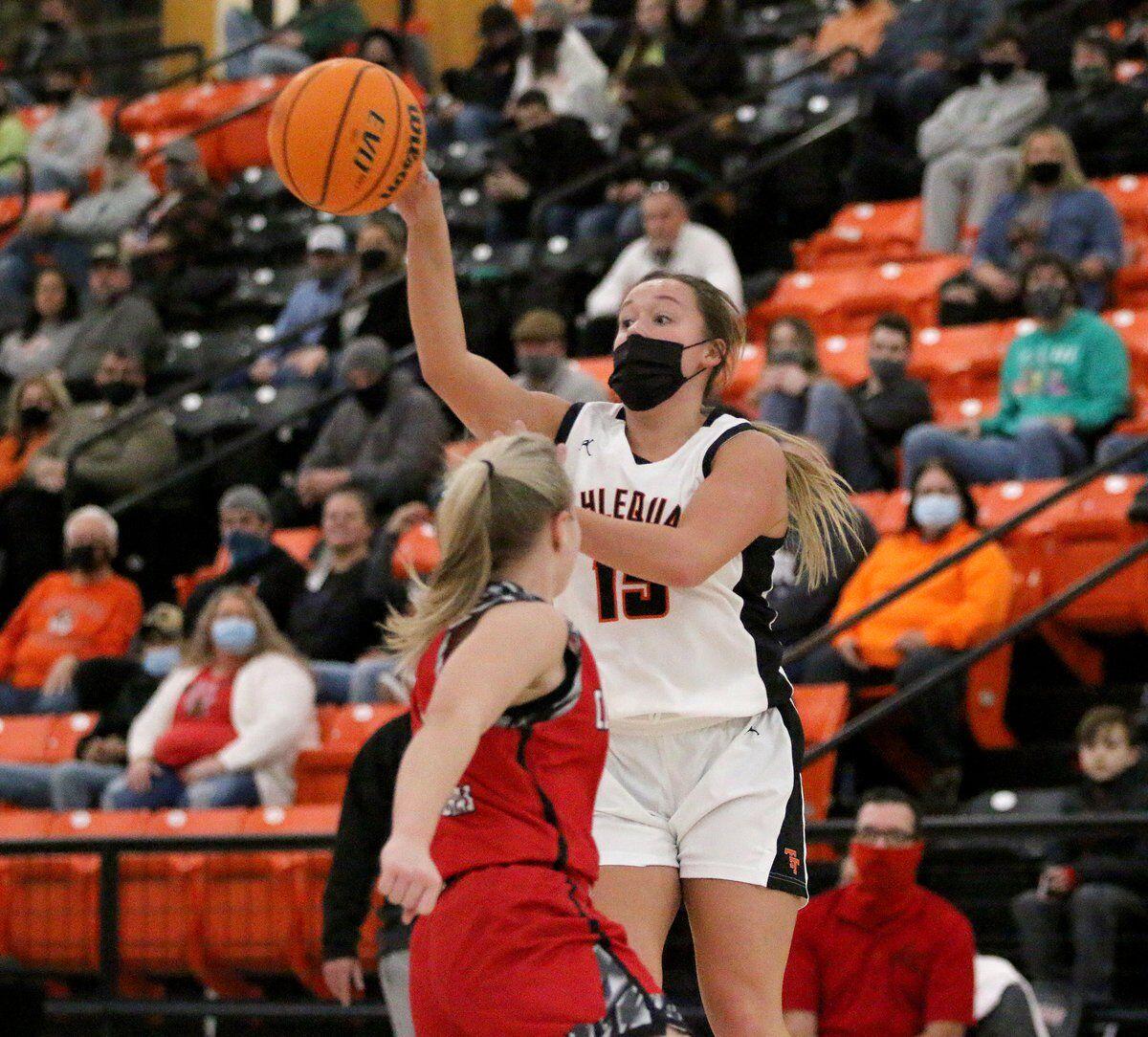 Tahlequah senior guard Kacey Fishinghawk is averaging 8.2 points and is shooting a team-best 50.5 percent overall from the floor.

Tahlequah junior Lydia McAlvain, shown here against Pryor on Feb. 2 at the TMAC, is averaging 7.6 points.

Tahlequah senior guard Kacey Fishinghawk is averaging 8.2 points and is shooting a team-best 50.5 percent overall from the floor.

Tahlequah has been nothing short of great over the past month, and the Lady Tigers are doing it at the perfect time.

They've put themselves in position for another deep run in the playoffs.

The Lady Tigers, who have been ranked second in Class 5A for a majority of the season, have won 11 consecutive games and will take their 18-2 record into a 5A East Regional Tournament Thursday when they face Tulsa Edison in an 8 p.m. tipoff at the Tahlequah Multipurpose Activity Center.

"We definitely like where we're at and we're playing well at the right time," said Tahlequah head coach David Qualls, who collected his 100th career victory against Verdigris on Jan. 23. "We've played against good competition the last several weeks. We're excited for the playoffs, and this is my favorite time of the year."

It's the fifth straight year Tahlequah has hosted a regional under Qualls. The Lady Tigers have benefited from playing on their home floor as they've captured four regional championships in a row.

"We're excited to get an opportunity to host another regional," Qualls said. "I'm proud of the girls for putting us in that situation. There's always going to be a different buzz around a playoff game and there's always a different level of excitement, but we are preparing like it's another game."

The accomplishments throughout the 2020-21 season have been remarkable.

Tahlequah posted its best regular season winning percentage (.900) in the Qualls' era, defeated 11 ranked teams, eight of those coming against opponents ranked in the top 10, and also won its first in-season tournament title under Qualls.

"This year, we've kind of gone to more of us trying to be our best as a group, controlling what we can control and playing our best and trying to improve and get better every day," Qualls said. "Our goal still, even through the playoffs, is to continue getting better and better."

The Lady Tigers faced Edison once during the regular season and cruised to a 76-18 win on the opening day of the Catoosa Port City Classic on Jan. 21. Edison enters the contest at 1-11, the lone win coming in its season opener on Dec. 4 against Tulsa Nathan Hale. The Lady Eagles haven't played a game since Feb. 6 and have had their last six games canceled.

In Thursday's tournament opener, second-seeded Tulsa Will Rogers will take on third-seeded Collinsville at 6 p.m. Tahlequah has also seen Rogers and Collinsville during the regular season.

The Lady Tigers defeated the then-seventh-ranked Lady Ropers, 43-35, on Dec. 10 in the Tahlequah Invitational, and overcame a 20-point deficit to beat Collinsville, 52-50, on Jan. 12 at the TMAC.

"It's always good to be familiar with a field," Qualls said. "With COVID in the way it's been this year, sometimes you'll get a regional where you've already played one or two teams twice. It's good being familiar with each team.

"Rogers would be a challenge because they are extremely athletic, long and quick. They're a program that's been in the state tournament the last three years, so obviously they present a big challenge. Collinsville, obviously, had us down 20 at one point on our home floor, so we look at that as another challenge. Edison's athletic and I think we match pretty well with them."

Thursday's winners will meet in the championship game at 1:30 p.m. Saturday at the TMAC.