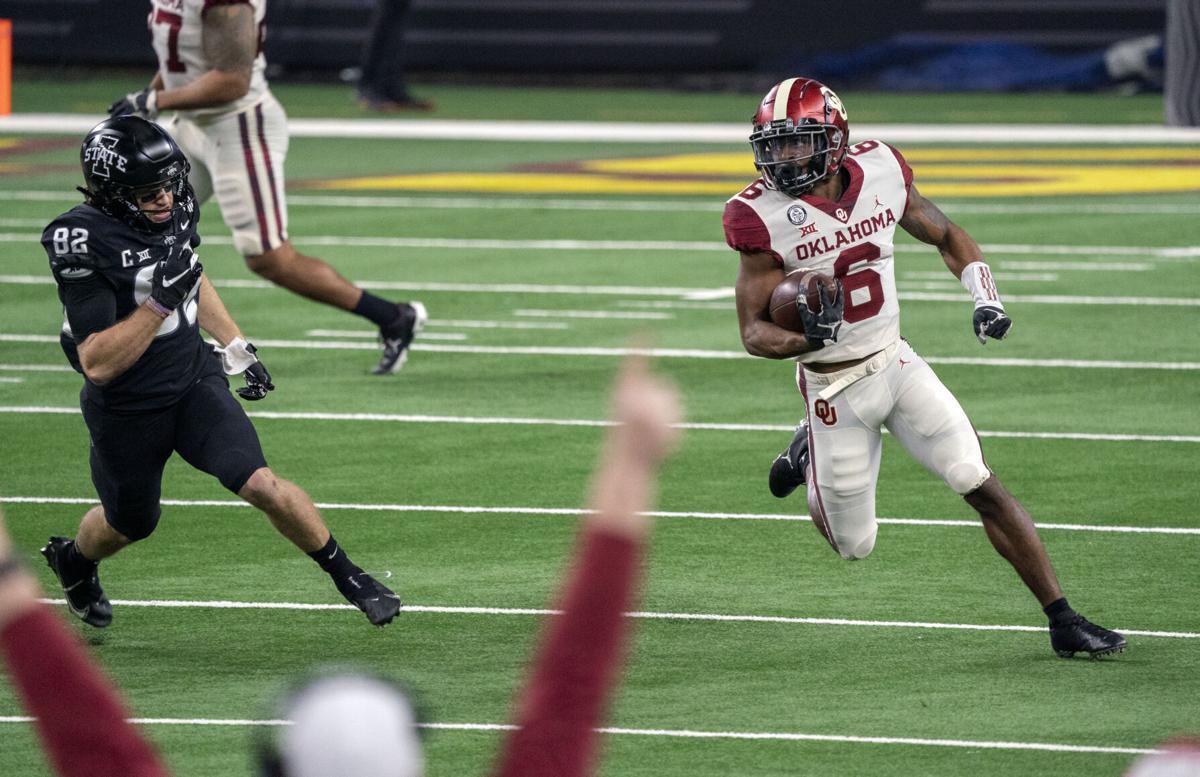 Oklahoma’s Tre Brown (6) turns the corner on a kickoff return during the first half of the Sooners’ Big 12 championship game victory over Iowa State. 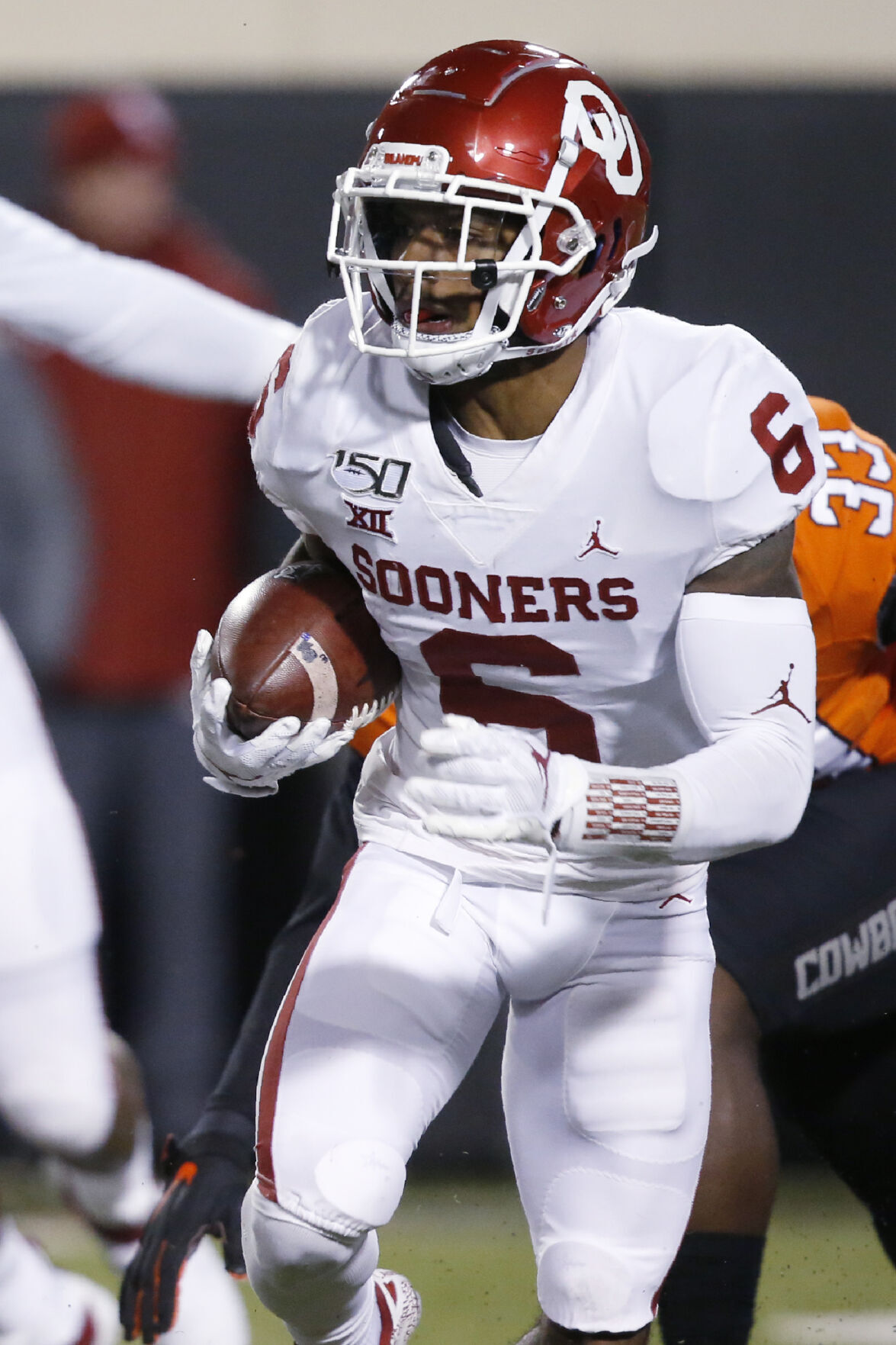 Oklahoma cornerback Tre Brown (6) carries during a game against Oklahoma State in Stillwater on Saturday, Nov. 30, 2019.

Oklahoma’s Tre Brown (6) turns the corner on a kickoff return during the first half of the Sooners’ Big 12 championship game victory over Iowa State.

Oklahoma cornerback Tre Brown (6) carries during a game against Oklahoma State in Stillwater on Saturday, Nov. 30, 2019.

Oklahoma’s secondary will be without arguably its best defensive back a week from today, when it’s set to face the nation’s leading passer.

Tre Brown, a senior and native Tulsan, opted out of the Sooners’ Cotton Bowl clash with Florida, he announced Monday via his Twitter account. The 2017 OU signee, who developed into a three-year starter, is entering the 2021 NFL Draft.

Brown leaves the Sooners on a strong note. He had two kickoff returns that went for 43 yards each and a game-saving interception against Iowa State, helping OU win its sixth consecutive Big 12 championship last Saturday.

OU coach Lincoln Riley said Brown, who starred at Union High School, will have a good opportunity to make it to the next level and is excited for him as he would be for any departing player.

“I think he’s made himself a better player, become much better with his technique,” Riley said. “I think that was a big part of him, was just consistency and technique. So I do think that’s improved. Like all our guys, when they get a chance to take that next step, we’re always excited for them, and Tre’s no different.”

Riley added he doesn’t expect the secondary “to miss a beat.”

The Sooner defense has frequently rotated its cornerbacks, relying on the likes of freshmen Woodi Washington, D.J. Graham and sophomore Jaden Davis. Tre Norwood, OU’s interceptions leader with four, also remains a possibility to move around in the secondary, although he’s yet to have those conversations yet with OU’s coaches.

Against Florida and Heisman Trophy hopeful Kyle Trask, who leads the country with 4,125 passing yards and 43 touchdowns, OU may be facing its toughest challenge yet in Arlington, Texas.

Norwood, at least, is looking forward to it.

“It’s going to be very fun,” Norwood said. “I mean, as a DB, you have to love a team that throws the ball, like you said, throws it a lot, that’s going to present ourselves with more opportunities on the back end to make those plays, the pass breakups. Most importantly, the ones that we love are the interceptions.”

OU, of course, has played at the venue each of the last four seasons and will finish its 2020 campaign there at the Cotton Bowl.

The Gator junior was asked about facing the Sooners in their de facto home away from home. He did not mince words when addressing the matchup.

Houston, a Fort Lauderdale, Florida, product, has accounted for 3.5 tackles for loss and one sack.

• Role reversal: Once known as a defensive juggernaut, scoring points are now apparently in style around the Southeastern Conference.

The SEC’s championship game, played between Alabama and Florida, ended in a 52-46 victory for the Crimson Tide. The game’s combined 98 points were the most of any conference title game.

Asked if the SEC championship reminded Lincoln Riley of the Big 12, the Sooners head coach agreed.

Harrison filled in for starting left tackle Erik Swenson and Murray for right guard Tyrese Robinson in the fourth quarter. An offseason, impacted by the COVID-19 pandemic, denied them a proper spring and summer to transition into the game.

Both finally appeared up to speed with the Sooner offensive line finishing strong against the Cyclones. Perhaps they’ll reprise those roles in the same venue against the Gators.

“They kind of went into fall camp kind of cold, not really knowing anything,” OU center Creed Humphrey said. “But they’ve done a great job learning the playbook and continuing to improve as far as fundamentals, techniques, things like that; transforming their bodies, all that.

“They’ve done a good job throughout this whole season. They’re going to be really good players. They’re both really talented. So it’s exciting to see.”