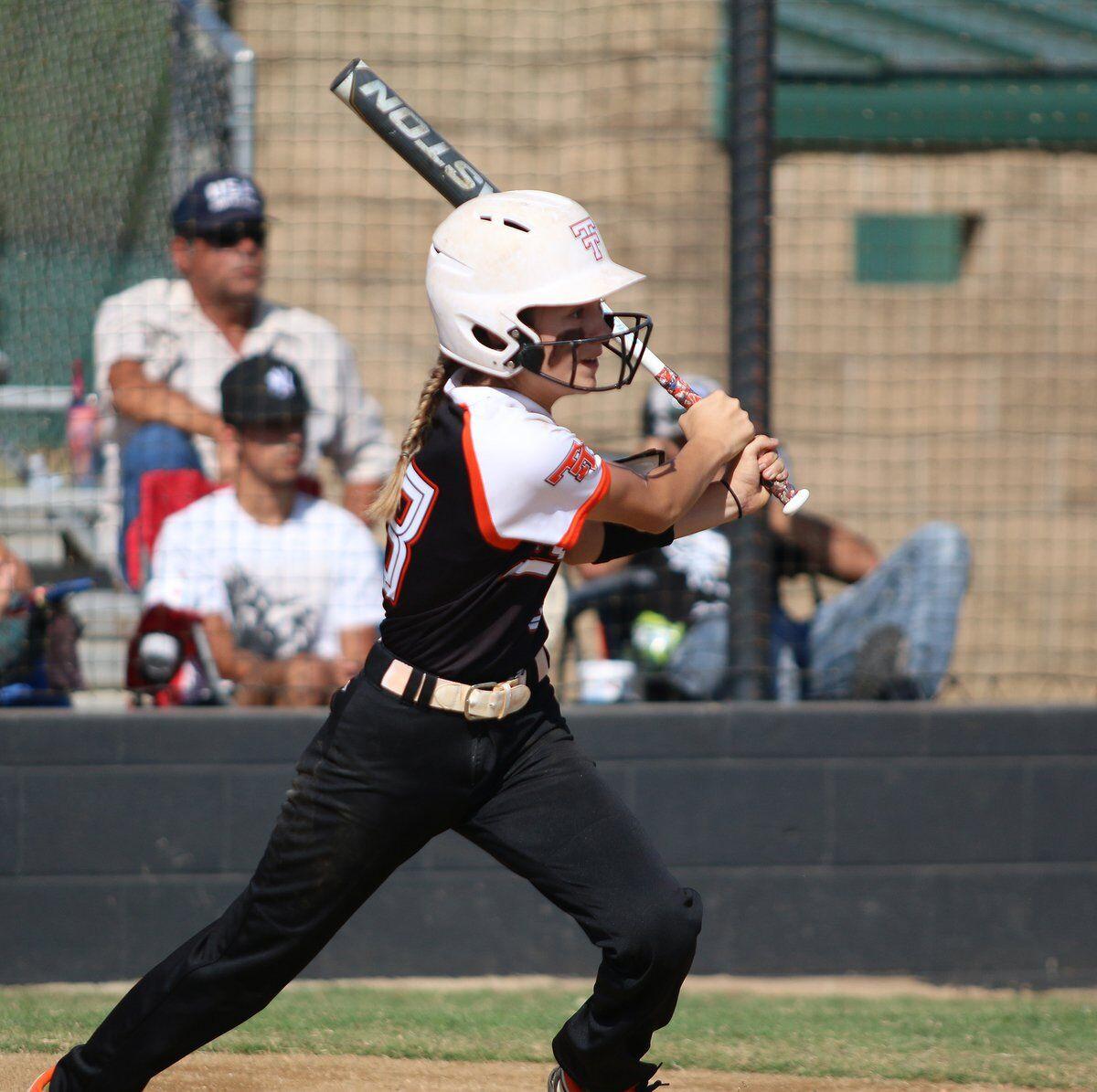 Tahlequah senior leadoff hitter Lexi Hannah reached base twice and scored a pair of runs Thursday in the Lady Tigers' 17-1 win over Collinsville in a Class 5A Regional Tournament championship game in Tahlequah. 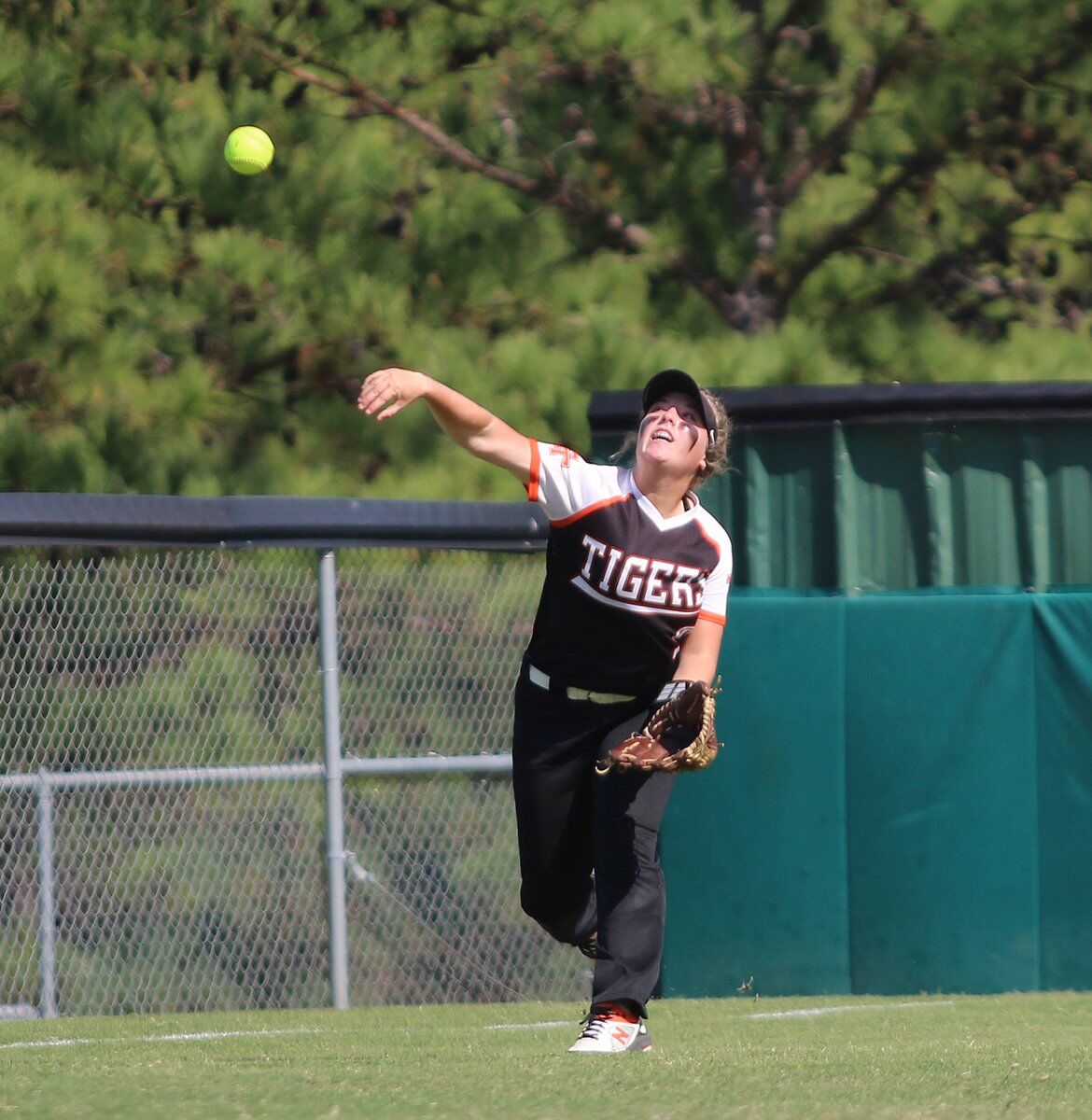 Tahlequah outfielder Madi Matthews throws back to the infield during the first inning Thursday against Collinsville.

Tahlequah senior leadoff hitter Lexi Hannah reached base twice and scored a pair of runs Thursday in the Lady Tigers' 17-1 win over Collinsville in a Class 5A Regional Tournament championship game in Tahlequah.

Tahlequah outfielder Madi Matthews throws back to the infield during the first inning Thursday against Collinsville.

There wasn’t any drama for Tahlequah over two days of outright dominance in a Class 5A Regional Tournament in Tahlequah.

The Lady Tigers capped a regional championship Thursday afternoon with a commanding 17-1 win over Collinsville to advance to their fifth consecutive state tournament as a program.

The win is the eighth straight for Tahlequah, who combined to outscore Tulsa Hale, McAlester and Collinsville, 42-1, in the regional. The Lady Tigers will enter next week’s state tournament at 27-9 overall.

Tahlequah was propelled by a lineup that hammered away for 13 hits and scored 11 runs over the first and second innings to take complete control.

Junior Mikah Vann also continued to shine in the pitcher’s circle, allowing one earned run, striking out six and not issuing a walk.

“It’s just a testament to the kids,” said Chris Ray, who will be making his fourth straight trip to the state tournament as Lady Tigers’ head coach. “All year long, they show up to practice, they work hard, and they put in the time. Our saying all year long has been, ‘If you take care of the little things, the big things will take care of themselves.’”

Every player in the lineup had at least one hit, and four different players — Jayley Ray, Vann, Hailey Enlow and Mia Allen — finished with two hits.

The Lady Tigers had six of their hits in the opening frame, including four straight to start. Lexi Hannah led off with a single and eventually scored on an RBI single by Ray, Vann and Enlow followed with consecutive doubles, and Jadyn Buttery and Allen later added run-scoring doubles to give THS a 5-1 lead. Amelia Miller brought home the sixth run on a sacrifice fly to center field.

“That first inning says a lot about this bunch,” Ray said. “Collinsville comes out and starts with a leadoff triple and gets a run and we turn around and put a six spot on the board. We talk all the time that this is a game of momentum and you’ve got to be able to go take the momentum away from the other team. Collinsville had it in the top of the first and we just answered right back.”

Vann settled in after allowing her only run in the first. She struck out two batters in the second, forced a ground out to leave two Collinsville runners stranded in the third, added a pair of strikeouts during the fourth, and left the bases loaded in the fifth with a strikeout to end the contest.

“Working outside has worked the best for me,” Vann said. “Coach Ray knows how to pitch me and I trust him. He calls my pitches, talks to me about what I need to work on, and I listen to him because he’s a very good coach. I like making him proud.

“I trust my defense behind me. If I get in trouble, I just let my defense do it. If I ever get in a bind they can help me out.”

“[Mikah’s] got a ball that’s never straight, it always moves with whatever pitch she throws,” Ray said. “Teams a lot of times have a hard time squaring her up. We’re not necessarily trying to strike people out, we’re just trying to get people to roll over something, and she’s got tons of faith in her defense.”

Hannah has been the catalyst at the top of the lineup all season for Tahlequah. She reached base twice and scored a pair of runs.

“Ever since the beginning we’ve had the best team chemistry,” Hannah said. “We work really good together as a team, defensively and offensively. We cheer each other on. We’re over here yelling and screaming and just have had a little more excitement.”

State tournament pairings will be announced Monday. The tournament begins Thursday in Oklahoma City with the quarterfinals, and closes Saturday with the championship game.

“When you get there, everybody’s good,” Ray said. “It’s all about matchups. I like my chances with anybody they roll out there.”